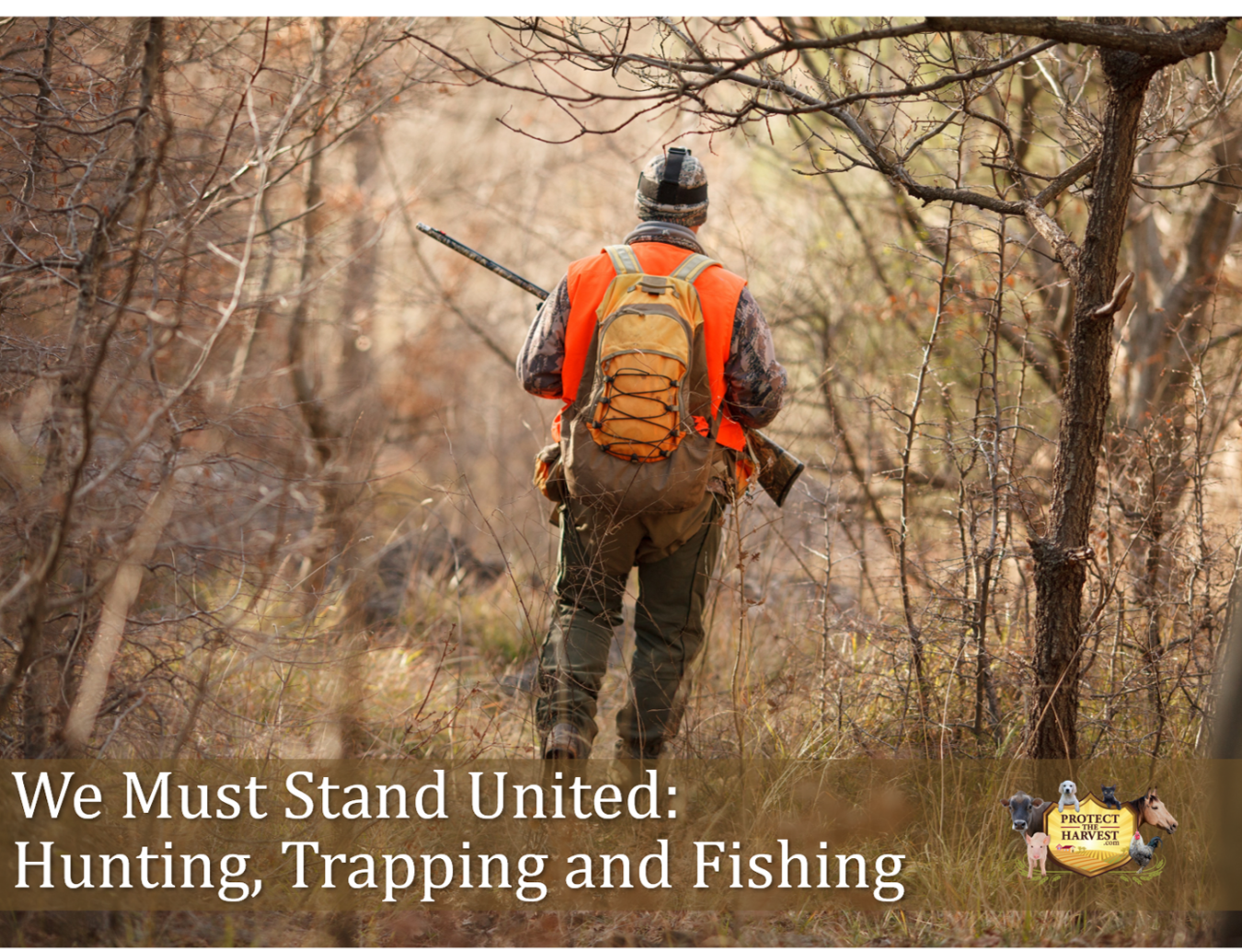 WE MUST STAND UNITED - HUNTING, TRAPPING AND FISHING

Hunting is Under Scrutiny

Hunting has been a part of human lives since our beginning. Hunting and gathering was essential for survival; humans lived nomadic lives following herds throughout the year. With the domestication of animals and the cultivation of crops, people started living in more permanent locations. Although most hunters and anglers feed their families with their catch or kills, hunting and fishing has moved away from being a basic necessity for survival to primarily a hobby or sport. Unfortunately, this basic human activity of hunting and fishing has recently come under scrutiny. Animal extremist organizations have pushed to outlaw it completely.
Animal extremist groups like PETA and the Humane Society of the United States have set their sights on banning and/or restricting hunting and fishing. They are abandoning well-researched scientific information in this quest for a “no-kill” society. They believe that no animals should be utilized by humans, no matter the purpose. What they are pushing aside is the fact that hunting and fishing is an integral part of American tradition and important to ecosystem and wildlife conservation.

Hunting for Conservation
Hunting contributes to wildlife conservation in several ways, but most notably in four ways: population control, money for conservation, encouragement of outdoor enthusiasm, and protection of land.

Population Control
According to the National Shooting Sports Federation (NSSF), “an overabundance of any one species can cause a shortage of food and an increase in the spread of diseases. Hunters help to regulate and maintain wildlife while not affecting future populations.” This is an important part of managing an ecosystem in several different ways. In some regions, as urban sprawl continues to change the landscape of our country as habitat reduction allows herbivores like deer, antelope, rabbits and elk to have a rapid rise in population size. Humans’ role as the ‘true’ apex predator is a necessary aspect of population control.
Most regions offer “tags” to hunters with licenses. The number of tags sold depends on the current population size of the hunted species. When an animal is extremely abundant, like white-tailed deer, hunters can put in for a number of tags and thus be able to take more than one animal in a season. Each state dictates their own limits. In the Midwest and East, hunters can take both antlered and antlerless deer so that the population doesn’t become dominated by females, as most hunters prefer to harvest an antlered animal. On the flip side, if an animal is not overly abundant, the state manages the number of tags given by making a lottery system. So, only a randomly selected number of hunters are given permission to hunt for a given type of animal.
In rural areas, predator population control is vital to help maintain healthy numbers of prey species, as well as to protect livestock. Rules vary by state and also by species. The hunting of some predator animals like bears, wolves, and mountain lions usually requires tags, while often no tags are needed for hunting coyotes.

Money for Conservation
Sportsmen and women have historically funded the majority of the conservation efforts in this country. Individual state’s fish and wildlife departments are primarily funded by hunting and fishing license fees, not taxes paid by the general public. At this time, these fees are contributing more than $1.4 billion dollars to the US economy annually. Additionally, special excise taxes on hunting and fishing equipment also contributes to conservation funds. Thanks to the Pittman-Robertson Federal Aid in Wildlife Restoration Act and the Dingell-Goodling Bill, excise taxes are also collected on sporting arms and ammunition, as well as archery equipment, respectively. Hunters and anglers help contribute more than $7 million dollars a day for the benefit of wildlife through these licenses and excise taxes. This money is divided up between each of the state’s fish and wildlife departments based on its land area and the number of licenses it issues to hunters and anglers each year. For this reason, one of the best ways to contribute to wildlife conservation is by purchasing a hunting or fishing license, whether or not you intend to use it.
A portion of this money is set aside specifically for waterfowl. Rather than through the state agencies, hunters have teamed up with the federal government to allocate revenue towards wetlands and waterfowl. The program requires hunters to purchase a duck stamp in addition to their hunting license.

Encourage Outdoor Enthusiasm
Outdoor activities are an integral part of American pastimes. Hunters and fishermen join hikers, wildlife photographers, bird watchers and campers in their enjoyment of our country’s natural world. Supporting all of these activities, in turn, supports conservation. As we have stated in articles about seeing and interacting with exotic animals, experiencing nature, whether it’s through a lens or through your sights, encourages an appreciation for it.

Protection of Land & Wildlife
Hunting some wild animals is an incredibly important tool used to protect land and native wildlife. An example of this is in the southern region of the U.S. Invasive wild pigs wreak havoc on the environment in 39 states across the country (mostly Texas) and must be managed in order to protect it. There are an estimated 2-6 million wild hogs in those regions, which create almost $1.5 billion in damage to crops and property annually. At this time, there are no limits on their capture, and they can be taken year-round in Texas.
Another example of managing one species in the protection of another, are the sea lions at the Bonneville Dam. For decades, the numbers of sea lions have rapidly risen and in turn has seriously impacted the population of fish species like salmon, steelhead and sturgeon. Sea lions have been protected by the Marine Mammal Protection Act which has allowed for their population to grow from a mere 10,000 animals in the 70’s to over 300,000 now. In 2018, common sense legislation was passed with bipartisan support to manage the sea lions decimating fish species at the dam. And, within this year they have already seen a reduction of predation of those important fish species, further proving that management of animals is an important aspect of ecosystem conservation.

While a majority of those who hunt set their sights on local wildlife, some seek the thrill of hunting animals on other continents. What many do not realize is the benefit of these types of hunts. Often what is portrayed in the media is a fierce opposition to exotic hunts in general. In fact, an elephant hunt can cost over $80,000 with most of the money going to the local community and towards a conservation fund for wildlife. The elephant’s meat feeds the community as well. The hunter will only take the tusks home. It is argued that thoughtfully regulated and expensive hunts for bull elephants in their waning days is a sustainable way to protect both species and habitat.

Why Hunting Needs to Be Protected

It is important to recognize that hunters, whether they are hunting for food or trophy, need to stand together in order to protect this pastime. Legislation to limit hunting and fishing is proposed nearly every day and it only takes one circumstance to set a precedent for the entire nation. A precedent is an event or action that is regarded as an example or guide to be considered in subsequent similar circumstances. In this case, a precedent would be a state banning hunting and/or fishing, and other states using the language of the bill, and their campaign strategy, to do the same thing in their state.

Examples of Recently Proposed Legislation to Ban Hunting and Trapping

Below we outline legislation that has been either proposed or passed in the last year that affect hunting and trapping. Previously we warned against precedents in legislation making a path forward for anti-hunting/fishing/trapping legislation; a perfect example can be seen in New Jersey where black bear hunting was banned in 2018. Unfortunately, now other states can point to this decision when pushing for something similar in their own state.
The list below is just a handful of the legislation that has been proposed to limit sportsmen in the last several years. It is important to stay informed about this type of legislation and educate your friends and family about the negative repercussions that would come from their passing.

Fishing on Behalf of Conservation

Everything that can be said about the importance of hunting as a time-honored American tradition can also be said about fishing. Additionally, like hunting licenses, purchasing a fishing license offers dollars for conservation in more than one way. That money goes towards preserving fish habitat, enhancing water quality and encouraging future anglers. Excise taxes on fishing equipment also contributes to long term conservation of both marine and freshwater resources.

Fishing Is Not Safe from Restriction

Fishing has been a beloved hobby for decades and as of yet, has not received the same opposition as hunting. However, it has attracted the attention of animal extremist groups like PETA and DxE who have hassled anglers and staged protests at fishing contests.
Even though opposition to fishing has not garnered as much attention as opposition to hunting, fishing is not safe from proposed restrictions by animal extremist organizations. As we have highlighted before, these groups do not believe any animals should be used or harvested by humans, which places both hunting and fishing on their list of targets. For example, in 2019, New York had legislation proposed that would ban both hunting and fishing tournaments. In order to preserve these activities, we need to stay keenly aware of animal extremist groups and their ultimate agenda.

Trapping Provides More Than Fur to Our Economy

Just like hunting and fishing, trapping has been a key part of our human existence and survival. According to the National Trappers Association, there are more wild furbearers (animals bearing desirable fur) in the U.S. today than there were 100 years ago. Many trap as an additional source of income, usually in winter, as winter coats are more desirable fur to make into clothing garments. The rest of the animal is also utilized. Beyond their fur, the animals provide materials for food, organic fertilizer, medicines, and other biodegradable products. Like hunting and fishing, trapping is also an important way to manage wild animal populations.

The agenda animal extremist and environmental groups are pursuing ultimately leads to a world with no human-animal interaction. While they may believe that hunting, trapping, and fishing are easy targets, we hope that all animal owners and outdoor enthusiasts band together in order to preserve these activities. More specifically, even if you do not enjoy hunting yourself, we urge you to stand up on behalf of hunters. This is the crux of our “We Must Stand United” series, whether you are a farmer, rancher, sportsman, carriage driver, etc. we hope you will stand together to protect those industries. As we have shared above, hunting, trapping and fishing contribute to wildlife and ecosystem conservation more than anything else.

We are proud supporters of sportsmen and women. We know the importance of these activities and will continue to work hard to help preserve these American traditions. If you’re concerned about the longevity of hunting and fishing in your state, be sure to learn more about “Right to Hunt and Fish” legislation. Bills like this are one way to combat non-governmental organization’s efforts to outlaw our valued traditions and proactive wildlife management. Another way to support hunting, trapping and fishing is by supporting organizations that advocate for sportsmen and women today and those of tomorrow. We urge you all to learn more about and join groups like: Ducks Unlimited, National Wild Turkey Federation, Pheasants Forever, Mule Deer Foundation, Safari Club International, and the Sportsman’s Alliance. By doing so, you will be proving to your fellow sportsmen that you have their backs when it comes to preserving this important American tradition.