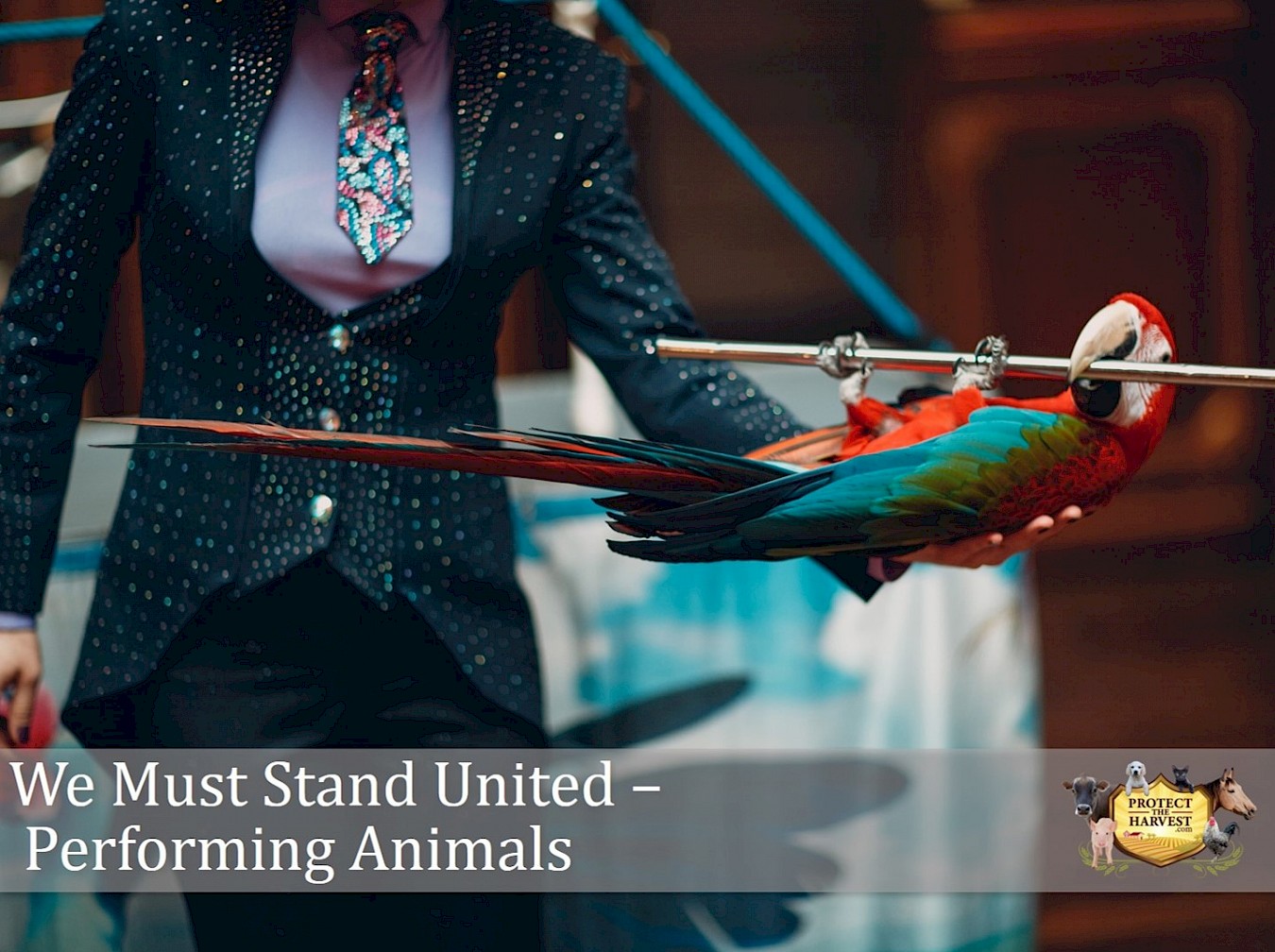 WE MUST STAND UNITED - PERFORMING ANIMALS

Exotic Animal Ownership – Not As Disney Portrays
False information spreads like wildfire in regard to exotic animal ownership and performing animals. In order to create a story, Disney movies like Dumbo have presented scenes with very specific imagery, and therefore spread misinformation about circuses and the animals involved. By design, these scenes pull at the viewers heart strings, which in turn creates a negative connotation about performing animals in general.
Fortunately, the reality and truth of exotic animal ownership is nothing like what is shown in Disney’s story telling efforts. Most people that own and perform with exotic animals have been involved with them for generations. Their livelihood depends on the welfare and well-being of the animals in their charge, and they take that very seriously.

Animal Extremist Groups - Efforts to Destroy Performing Animals
Animal extremist organizations long for a world where no animal is owned, exhibited, or used by humans for any purpose. They are fighting daily to make it impossible for animals to be owned or utilized, disregarding any science or facts on the matter. They are not experts in animal care and are not worried about the unintended consequences of their actions. In their efforts to push for a world without working or performing animals, one of their key tactics is using antiquated or false information. This is meant to gain support of ending domestic animal performances with the goal in mind to end exotic animal ownership as well.

Domestic Animals Like Dogs and Horses Are Next On The List
While there are many more people who show domestic animals like dogs or horses in the U.S. than those who exhibit exotic animals, those who do not exhibit exotic animals should support and protect the right to do so. Recognizing that their interests are next on the chopping block in the eyes of these animal extremist organizations is imperative. This is because animal extremist groups make no distinctions. Once they reach their goal of eliminating exotic performing animals, their attention will be turned to domestic. Ultimately, the ability to continue to compete and exhibit domestic animals is tied to the perseverance of exotic animal owners. In all, we are urging everyone to stand together on behalf of performing animals.

The Public Needs to Know About USDA – APHIS Oversight
What most people don’t know is that there is extensive government oversight in regard to exotic animal ownership. Performing animals are highly regulated by the United States Department of Agriculture (USDA) and the Animal Plant Health Inspection Service (APHIS). In addition to regulating their care and living environment, there is oversight of their transportation and exhibitions. Owners of exotic and performing animals are required to obtain licenses issued by the U.S. Department of Agriculture – Animal and Plant Health Inspection Services (APHIS).

USDA-APHIS License Holders
According to the USDA – APHIS website, these licenses are divided into four categories:
Commercial Animal Dealers:
o “Individuals or businesses who buy, sell, offer to buy or sell, or transport or offer to transport, in commerce, warm-blooded animals to or from another dealer or exhibitor must be licensed as a dealer.”
Research Facilities:
o “Research facilities use animals (as defined by the Animal Welfare Act) for research, teaching, testing or experimentation. Examples of research facilities include hospitals, colleges and universities, and pharmaceutical firms.”
Exhibitors:
o “Individuals or businesses with warm-blooded animals that are on display, perform for the public, or are used in educational presentations must be licensed as exhibitors with APHIS. Licensed exhibitors include circuses, zoos, educational displays, petting farms/zoos, animal acts, wildlife parks, marine mammal parks, and some sanctuaries. The animals involved in the exhibition may include domestic and exotic animal species.”
Transporters:
o “A person with a commercial business that moves animals from one location to another is considered a transporter under the Animal Welfare Act and must be registered with the USDA. Examples of transporters include airlines and trucking companies.”
For additional information about licensing and registration of dealers, exhibitors, transporters and researchers, follow this link HERE

Successful Exotic Animal Owners – Animal Welfare and Conservation
Protect The Harvest has worked hard to share positive accounts of exotic animal ownership and exhibitions. The vast majority of family businesses that work with and exhibit performing and exotic animals follow the letter of the law and many go above and beyond USDA and APHIS requirements when it comes to providing for the enrichment and welfare of their animals. These same family businesses help conservation efforts by educating the public about wild animals. Often when people have the opportunity to see or even interact with wild animals in person, it inspires a passion for those animals. This is true for zoos and wildlife sanctuaries as well.

Types of family businesses that work with performing and exotic animals may include zoos, wildlife education centers, circuses, and aquariums. Here are two examples of family-run businesses. Each of these places is a great example of the importance of a human- animal bond:

Bearadise Ranch - The family business of Bearadise Ranch, cares for a number of bears that live out their days on a ranch designed specifically for their comfort, enrichment and welfare. A few months out of the year, the Bearadise Ranch bears travel across the country to educate the public about bears. The family that operates Bearadise Ranch is dedicated to raising awareness about habitat preservation and conservation of all bear species.
The Preserve – Located in Texas The Preserve is a facility dedicated to creating a unique opportunity to connect with elephants and garner an appreciation for their species.
Preserving Performing Animals Is Critical for Future Generations
Performing animals have worked alongside humans for thousands of years. We cannot let animal extremist groups keep future generations from experiencing the amazing things these animals can do, with the help of humans and vice versa. Educating the public about the real life of performance animals is the goal of Protect The Harvest, and we work diligently to fight not only for animal welfare but the right for humans to own and exhibit these animals as well.

Here is a list of performing animal situations we are working to protect:
- Horses – Horse Shows, Racing and Rodeos
- Dog Shows, Trials and Racing
- Carriage Horses
- Bull Riding and Other Performing Animals Utilized by Rodeos
- Exotic and Domestic Animals used in Circuses and Educational Animal Exhibitions
- Zoos and private businesses that provide educational opportunities for the public to learn about animals.

Ways to Support Performing Animals
In order to protect our ability to interact with animals, we must stand together. You can do this by:
- Attending circuses when they visit your area.
- Visiting your local zoo or aquarium.
- Participating in dog show events with your dog.
- Attending rodeos or horse shows in your area.
- Visiting animal sanctuaries.
- Visiting places like Bearadise Ranch or The Preserve.
- Refraining from spreading misinformation that disparages exotic and performing animals.
- Sharing information about the activities and agenda of animal extremist groups.
- Supporting legislation like the Working Animal Protection Act that is being proposed in several states across the county.
- Thoroughly investigating proposed laws and regulations in your city, county and state regarding the transportation, exhibition and ownership of exotic and performing animals. Providing support to animal owners who are being targeted by animal rights backed legislation and municipal codes.

Protect The Harvest Works to Preserve Performing Animals
We at Protect The Harvest want to preserve the opportunity to see performing animals, especially for future generations. Can you imagine a world without them? Can you imagine your child having to experience only animatronic or virtual animals instead of the real ones? That is why we feel so strongly that the public needs to band together to combat misinformation, support their fellow citizens who exhibit animals—no matter what species-- and share truthful and positive accounts about how performing animals are treated.