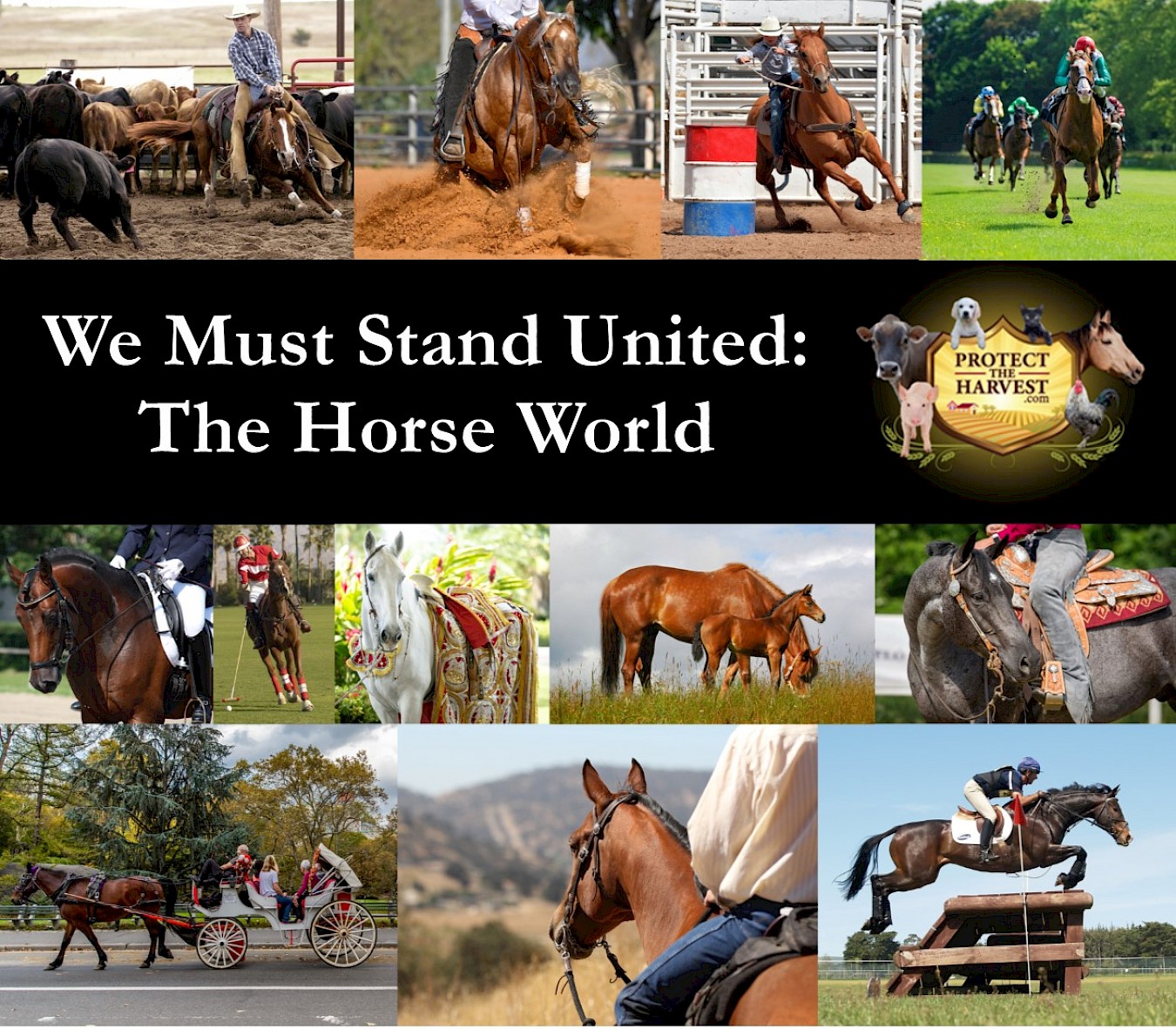 WE MUST STAND UNITED - THE HORSE WORLD

Animal extremist and other non-governmental groups have targeted different parts of the horse world for several decades. These groups are aiming to end all animal ownership and view villainizing horse owners and trainers as a step in that process. They target one discipline or breed at a time, and they have made big inroads without many in the horse world noticing.

They rely on a “divide and conquer” technique to push their agenda. These groups have become experts at picking the horse world apart. In this day and age of posts going viral over social media, one video clip or picture taken out of context could do damage that lasts for years. They malign an entire sport using a very small number of “bad apples” to make their argument. Fake and malicious posts have the potential to influence lawmakers which in turn, offers an opportunity for the uneducated public to vote for legislation that creates permanent changes. These changes do not improve the welfare of horses or the industry itself.

These groups are implementing a multi-prong approach by:

Horses Are Part of The Human Experience

Humans have 6,000 years of domesticated history with horses. Horses have made significant contributions to the development and advancement of the modern world. Generations of purposeful breeding has allowed for horses to become more specialized. Today in the U.S., the roles horses play in the lives of their owners are as varied as their uses. Some work on western cattle ranches, others race, some provide therapy – physical, emotional, and behavioral, some pull carriages, and still more compete in a variety of horse show events ranging from jumping and dressage to reining, cutting, working cow horse or rodeo, and some are trusted trail horses and represent the fulfillment of childhood dreams or adulthood goals.

Do Horse Owners Realize They Are Helping Animal Extremist Groups Eliminate Their Lifestyle?

Many members of the team at Protect The Harvest are lifelong horsemen and women. We have been hard at work to warn the horse industry of the activities of animal extremist groups and have been looking at this issue from a number of different viewpoints.

We have some questions that all horse owners need to consider:

Folding to Pressure Is Not the Answer

When it comes to animal welfare, changes (when needed) must come from within the horse industry itself. Changes should only be made by the people who truly understand horses, their behavior, and the industry. Changes should not be made due to pressure from animal extremist organizations, especially when their ideology views all horse ownership as slavery, and they paint the entire horse community as abusers.

For example, The Stronach Group who owns Santa Anita, Pimlico, and several other racetracks, recently took PETA’s recommendations almost word for word when updating their tracks’ racing rules. It would have been better for the sport of racing if the associations, breeders, owners, trainers, and jockeys could have reached an agreement to better the sport from within, instead of caving to PETA’s pressure. A similar situation happened in the Tennessee Walking Horse industry. Now, the reining industry is being targeted as well as rodeo.

Over the years we have seen a lot of misinformation publicized. Animal abuse is a hot topic these days and most non-horse people are getting their information about the horse industry from animal extremist groups. What is even worse, is witnessing other horsemen and women jumping to conclusions and joining in on attacks. When people fail at supporting their own industry and fall for the animal extremists’ smear campaigns, how do they expect people with no knowledge of horses to react?

It is natural to want to keep your distance when animal extremists target other disciplines. Looking the other way or even joining in and sharing this misinformation is very common, unfortunately. It causes further division and gives animal extremism another foothold to harm horse owners as a whole. When activists see posts and videos on social media portraying horse owners and trainers negatively, it gives them more leverage to push their agenda.

We must stick together and support other disciplines. Even if you do not participate or know anything about a specific discipline that is being targeted, the attitude of, “I’m glad it’s not us” and standing by doing nothing, while your fellow horsemen and women are being attacked and ultimately controlled by the actions of animal extremist organizations is a big problem that impacts all horse owners.

It is common to hear “they will never come after me, I take better care of my horse than I do of myself”. Let us not forget, the animal extremist agenda is to end ALL animal ownership, regardless of the care an animal receives. Keep in mind, animal extremist ideologues view all horse ownership as akin to slavery. They make no distinctions. Each time this happens, animal extremist groups gain ground in reaching their goal, to end all horse ownership. Once they destroy one sector of the horse industry, they will move on to another. When one sector of the horse industry allows animal extremist organizations to influence their policies it gives animal extremism one more foothold into the industry as a whole. It sets an ugly precedent for their future involvement in all other horse sports. Today it is racing, rodeo, and reining. Tomorrow it could be your chosen discipline.

What Should the Horse Community Do?

We Must Stand United - Together Our Voices Are Strong

The horse industry has an overall impact of 102 billion dollars a year and employs 1.75 million people. With 9.2 million horses in the US and 4.6 million citizens involved in the horse industry, we make up a large and influential group.

We must not waste opportunities to work together to defend our right and freedom to own, raise, train, use, show, and enjoy horses in our chosen disciplines. As an industry, we should be showing a united front to protect ourselves and these animals we hold so dear. Horse owners, association boards and members, competitors and horse lovers, in general, need to put aside differences and work together to address issues with horse welfare if they arise and also work to exclude animal extremist organizations from our community.

If people within the horse industry do not publicly support each other, encourage improvements in welfare as needed, and educate interested parties, animal extremist groups will gladly do it for us. In fact, they are already fast at work spreading misinformation about horses and horse owners and trainers. It is long past time to think of the horse world as a community. The animal extremist viewpoint of the horse industry is not the narrative the horse community wants shared. Though we will never agree on everything, we need to stop, think, and remember, we are more alike than we are different. From trail and ranch horses to Triple Crown winners to NCHA World Champs there is common ground and it’s called….