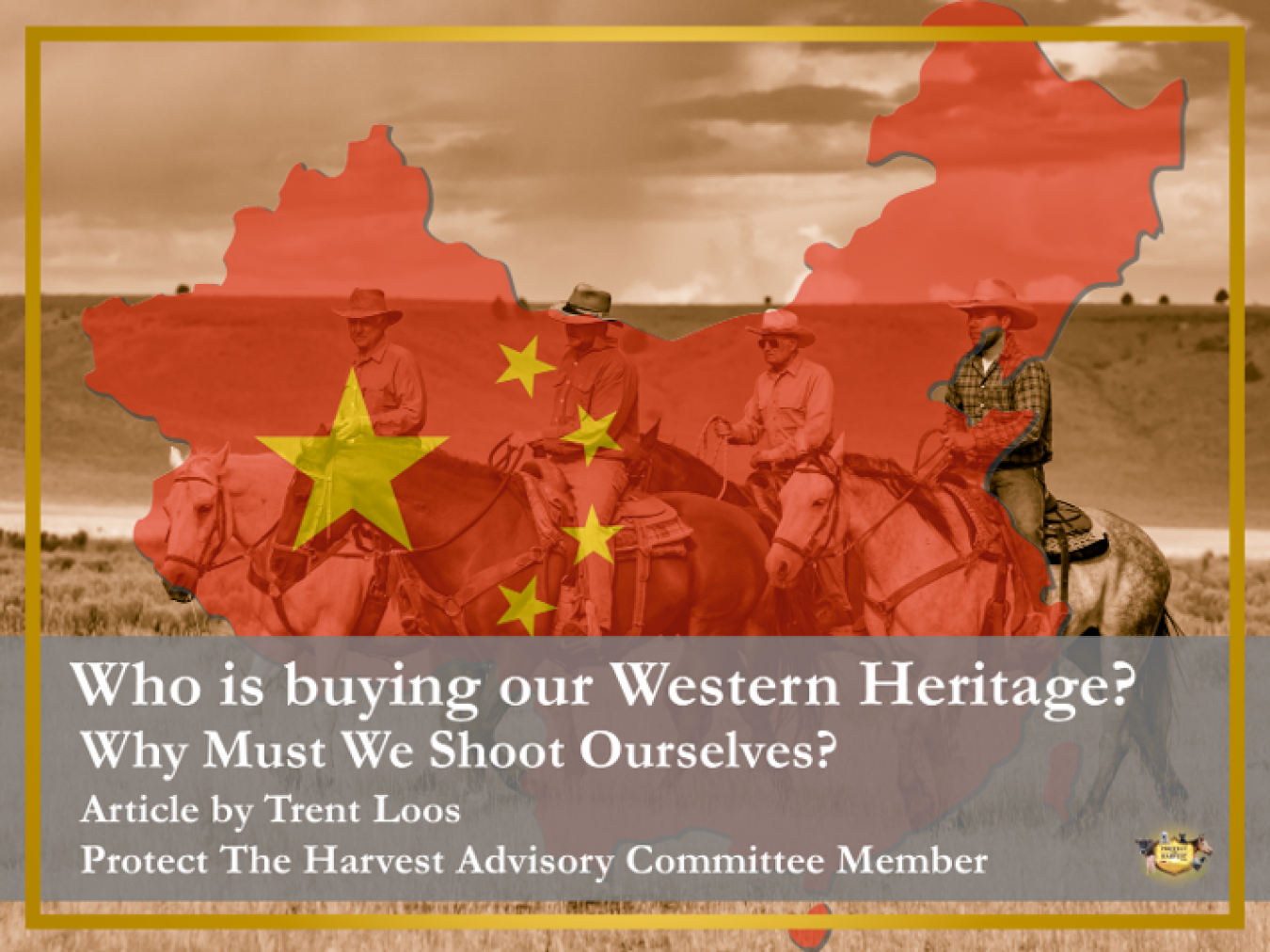 WHO IS BUYING OUR WESTERN HERITAGE?

Why must we shoot ourselves?

“Come on Pilgrim, you see what's going on here don’t ya?”

Yes, I, as much as anybody, would love to see the John Wayne era return, but if you haven’t been paying attention to the Yellowstone Fever, I think we are in trouble. Shoot at me all you want, I have not seen a single episode. It is the kind of thing I would latch onto in a heartbeat and then to make it worse they brought Buster Welch in on the first episode this season. I mean that is real stuff. So as you worry that I will rain on your parade, I feel compelled to share some facts with you about what is really going on with this fever that is sweeping the country.

Chinese Entities Are Buying US Farms and Ranches

First off, I still get calls regularly from every corner of the nation with the latest story of how their neighboring farm or ranch that just sold to the Chinese. From Georgia to Oklahoma to Vegas and the West Coast, the Chinese are buying our resources, I don’t think anybody even disputes that. Now it can be argued that new money into the U.S. economy is a healthy thing but I happen to think this is different.

So Taylor Sheridan, who did grow up on a Texas ranch, had an idea for a screenplay that he pitched to a couple different entities in Hollywood and most sent him packing. I am pretty sure that they all told him there was no room for hicks on the red carpet.

However, that is not what Paramount told him; Paramount jumped all over it. They reportedly offered Costner $500,000 per episode just to get everyone's attention and that part worked very well. Interestingly enough, major media attention was given to two different Chinese firms “infusing” $1 billion into Paramount just one year before Yellowstone was launched. For the record, those two Chinese entities are Huahua and Shanghai Film Corp.

Now let's switch gears for a moment. In 2015, a New York businessman, film maker and investor named Thomas Tull brokered a deal with Chinese billionaire Wang Jianlin's Wanda Group to sell Legendary Entertainment for $3.5 billion in cash, stock and debt. What is so interesting about this little Chinese outfit is that they just happen to own AMC theaters which include 8200 screens in 661 theaters in the US alone. Folks, China controls Hollywood.

Suddenly in 2021, the name “Teton Ridge” is popping up everywhere. Teton Ridge is owned by none other than Thomas Tull. They are reportedly telling everyone that they “fell in love with the history and heritage of the Western culture”. Let’s take a quick look at their recent partnerships and acquisitions. The American Rodeo, Cowboys and Indians magazine, Better Barrel Races, AQHA, PRCA naming rights at 2021 NFR and Run for a Million. Now the Chinese own not only Hollywood but the western culture of our nation. That must have been some great partnership right there with a feller by the name of Taylor Sheridan who is the founder of Run for a Million.

It also turns out that the most famous horse ranch in the world, 6666 Ranch, sold in 2021 to the Yellowstone Creator Group. Taylor Sheridan is the front man from the group but I see a Teton Ridge LLC corporation licensed in Weatherford, TX listed as a Foreign Entity that was just created in 2021 and one of the holdings listed is “tr6666”.

I have another interesting factoid about Thomas Tull and Teton Ridge. He recently donated $1 million to Yellowstone Forever. This NGO, like so many others, claims to be improving wildlife in the natural ecosystem. If you go to their website, you will see that they have programs to improve habitat for Montana wolves and cougars. In addition, they have a goal of getting bison outside the boundaries of Yellowstone National Park. In fact, as I read the language on their website it parallels that of the American Prairieland Reserve that has been consuming Montana land faster than a range fire.

Know What You Are Supporting

Folks, to be blunt, apparently that is what makes the Duttons so popular. The Chinese are preying on our history and heritage in the Western culture while they steal the land and resources right out from under us. The worst part of it is, they are doing that with hoards of people buying t-Shirts to cheer them on as if this is the John Wayne revival we have been waiting for.

I know the die hard fans of Yellowstone are not going to pay attention but I simply want to point out that once again we are our own worst enemy. Once we head down this path, how far will we get before Americans wake up and see the truth before it’s too late!