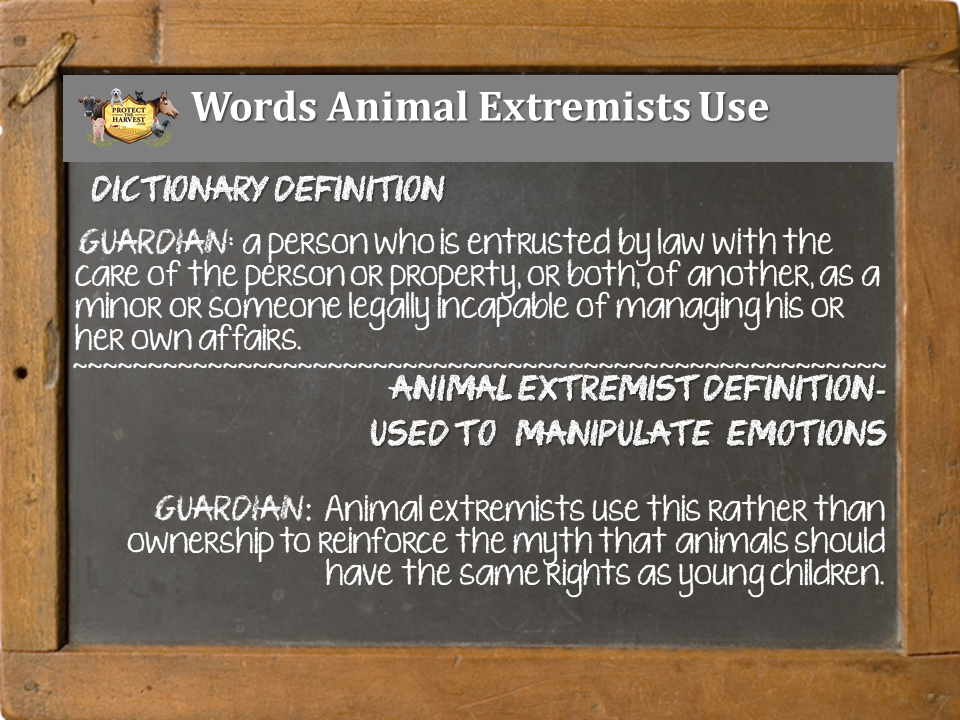 Animal guardian: Animal extremists want to do away with all language that is “demeaning” to animals. No longer do they have ‘owners,’ instead they have ‘guardians.’ Surprisingly, many people are okay with this term, not realizing that guardian is actually a legal designation, and along with that designator comes responsibilities both moral and financial. The term guardian reinforces the myth that animals are entitled to the same rights as small children. This opens the door for animal extremists to take another step by making the claim that food production livestock have the right not to be eaten.

In 2005, the American Veterinary Medical Association (AVMA) addressed this concern. They still hold this position as of 2019. This is a part of AVMA’s stance on the use of the term “guardian”:

“Some animal owners may like to refer to themselves as ‘pet guardians,’ however ‘guardian’ is a legal term that has significant legal implications and repercussions. Its use to describe the relationship between animals and their owners is inappropriate. Under well-developed principles of guardianship law, guardianship is a fiduciary relationship (the highest legal civil duty owed by one person to another). The ward's interests are always to prevail over those of the guardian. Some conflicts that arise from application of human guardianship law to animals are described in the text that follows. On the basis of these conflicts, the American Veterinary Medical Association (AVMA) recommends that ‘guardian’ not be adopted, even to semantically describe the relationship between humans and their animals.”

Guardianship means that you, as the owner, do not have the right to determine whether you can afford certain diagnostics, medical procedures, or even the ability to choose humane euthanasia if you are financially unable to pay for treatment.