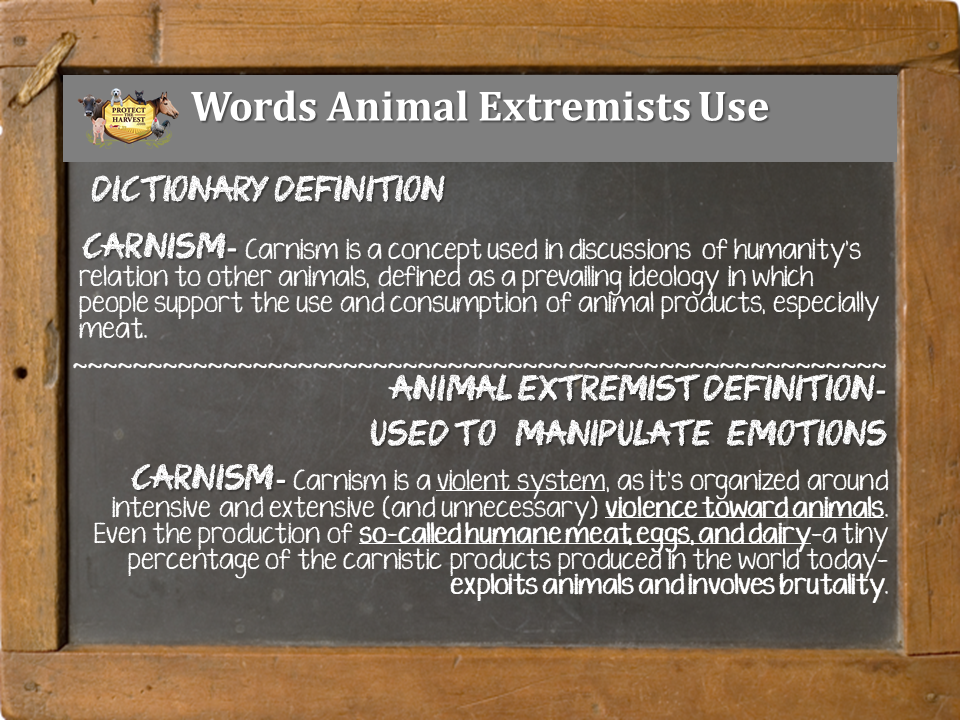 Carnism: Carnism is a concept used in discussions of humanity’s relation to other animals, defined as a prevailing ideology in which people support the use and consumption of animal products, especially meat. Eating meat is not new. Humans were first hunters and gatherers, before developing agrarian societies and becoming farmers. Much like wild animals who constantly roamed looking for food, so were the first humans who walked the planet. So, it should come as no surprise that eating meat is prevalent.

In the vegan mindset, carnism means something completely different: “Carnism is a violent system as it’s organized around intensive and extensive (and unnecessary) violence toward animals. Even the production of so-called humane meat, eggs, and dairy – a tiny percentage of the carnistic products produced in the world today – exploits animals and involves brutality.”

There has been a push by the animal extremist and environmental extremist NGO’s to end consumption of meat and the use of animal products in order to “reduce greenhouse gasses” and “become more sustainable.” They even go so far as to say that “it’s more affordable to not eat meat.”

Regarding the reduction of greenhouse gasses, Dr. Frank Mitloehner, Professor of Animal Sciences and Air Quality CE Specialist, has gone on record describing how agriculture affects greenhouse gasses in the U.S. and abroad. He has made no compunction that the ag industry in the U.S can work better at reducing, but also has made the argument that the U.S. model can be used in developing nations to improve their production of greenhouse gas. After all, it’s not just the U.S. that creates it. You can read his blogs here: https://clear.sf.ucdavis.edu/blog

As far as the argument of it being more affordable not to eat meat, there are many aspects of that argument that are just plain wrong. For years, nutritionists have told us to eat less processed food, to eat whole foods, and to eat naturally. Now the vegan extremists want us to eat a highly processed, chemically grown, plant-based “meat.” They want us to drink “milk” made from plants, some of which use more water than other crops with a similar nutritional value. They want us to supplement the naturally occurring, bioavailable amino acids found in animal products, to those using either plant-based whole foods (requiring more than double the calories) or synthesized in a lab making them less bioavailable to the body. This is the mindset of an affluent, predominately middle-class female population, which make up the vast majority of animal extremist groups. They seem to have no concern about getting healthy, nutritious food to our underserved, food-insecure members of society.