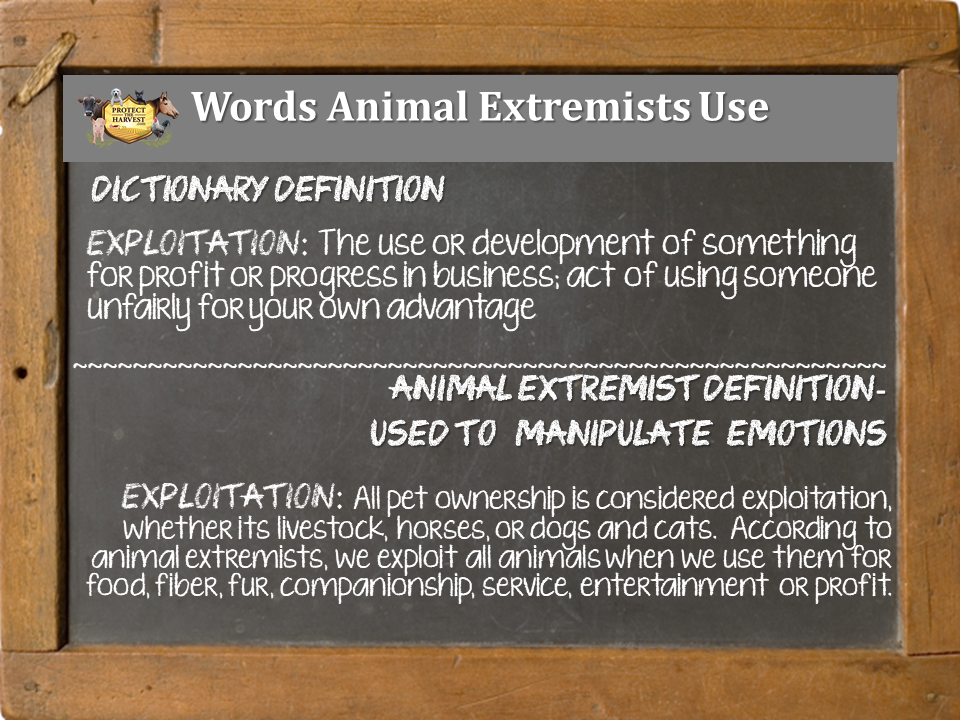 Exploitation: According to the Oxford dictionary, the definition of exploitation is “a situation in which somebody treats somebody else in an unfair way, especially in order to make money from their work.” The Cambridge dictionary defines it as “the use or development of something for profit or progress in business; act of using someone unfairly for your own advantage.”

Animal extremists view all animal ownership as exploitation, whether its livestock, horses, or dogs and cats. According to animal extremist groups, we exploit animals for food, fiber, fur, companionship, entertainment, and profit. Extremists also believe that animals bred, bought, and/or sold as companion animals are exploited. On the contrary, they believe adopting abandoned animals for the purpose of rescuing them from a perceived dreadful death or a terrible life is not exploitation. Both scenarios involve money, whether to a breeder, rescue or shelter, so how are they both not exploitation if you follow their logic?

Animal extremists also believe that working animals lead lives of suffering and hardship and liken it to human slavery, and therefore are exploited. Tell that to the handler of a military K9 whose sensitive nose kept the handler from stepping on a land mine, or to the police officer whose K9 partner jumped through a window where a murderer was holed up, got stabbed by the perpetrator while attacking, and whose partner raced him to the animal emergency critical care hospital where he was welcomed by staff as a hero.

Livestock receive excellent care, and in many cases better care than their owners. They receive scientifically and nutritionally balanced food, preventive veterinary care, as well as care if they become ill or injured. Special care is also taken to endure their welfare is addressed via comfortable and safe housing and pasture systems. Most people also understand that livestock feed the world, that the byproducts from the processing of livestock do not go to waste, but are used in many everyday products that everyone uses, whether knowingly or unknowingly.

They are not abused, nor “taken advantage” or “exploited.”