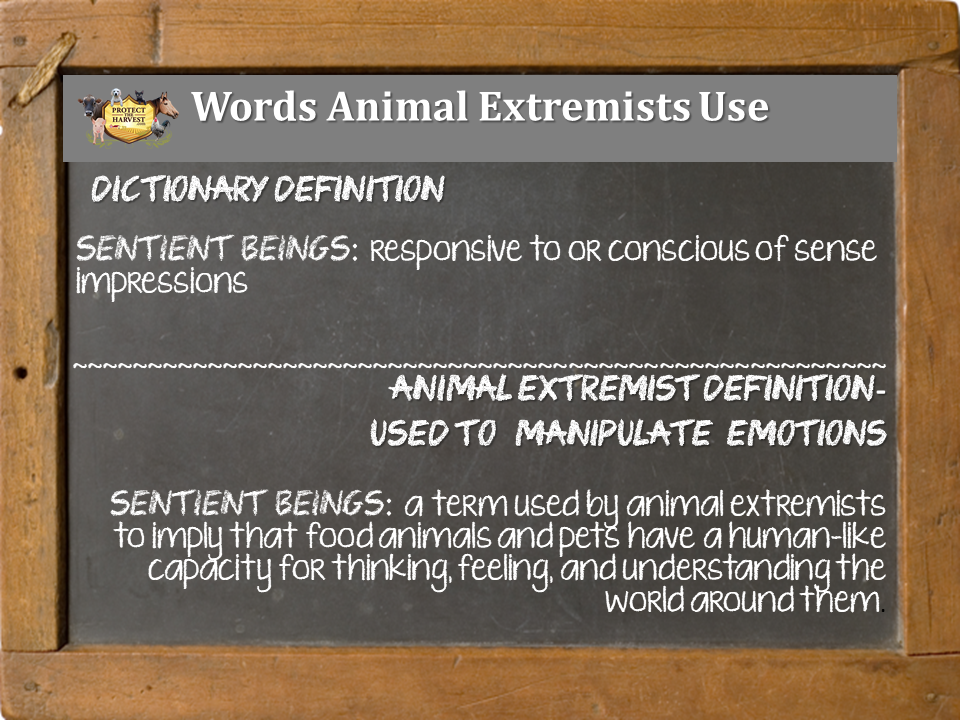 Sentient Beings: a term used by animal extremists to imply that food animals and pets have a human-like capacity for thinking, feeling, reasoning, and understanding the world around them. They further proclaim that because they believe livestock is sentient, humans have an ethical obligation not to cause “pain and suffering” and therefore, livestock should not be raised for food.

It is no secret that dogs and cats and other animals are capable of feeling pain, anxiety, happiness, thirst and hunger. However, to place them on the same level as human sentience is unfair to the very nature of dogs, cats, horses, cows, pigs, poultry, and all other animals whether domesticated or wild.

Humans have the innate understanding of right and wrong (morality). Watch a very young child do something they think might be “wrong” and they act guilty. A dog owner may perceive their dog is acting “guilty” if caught getting into the garbage because it is reacting to the owner’s behavior of being upset. However, when observing dogs without their owners present shows that dogs do not stop to consider getting into the garbage. It is enjoyable for the dog including providing a tasty reward.

Knowing “right from wrong” is important when considering the concept of sentience. If the dog and cat are declared to be sentient beings on a level with human sentience, the next step would be to give them “personhood” status. This is exactly the status animal extremist group Nonhuman Rights Project has been attempting with its ongoing appeals over Happy the Elephant in New York.
The end goal of animal extremism is to give animals “personhood” status and remove them from human care.