WHAT YOU NEED TO KNOW- ANIMAL EXTREMIST LEXICON 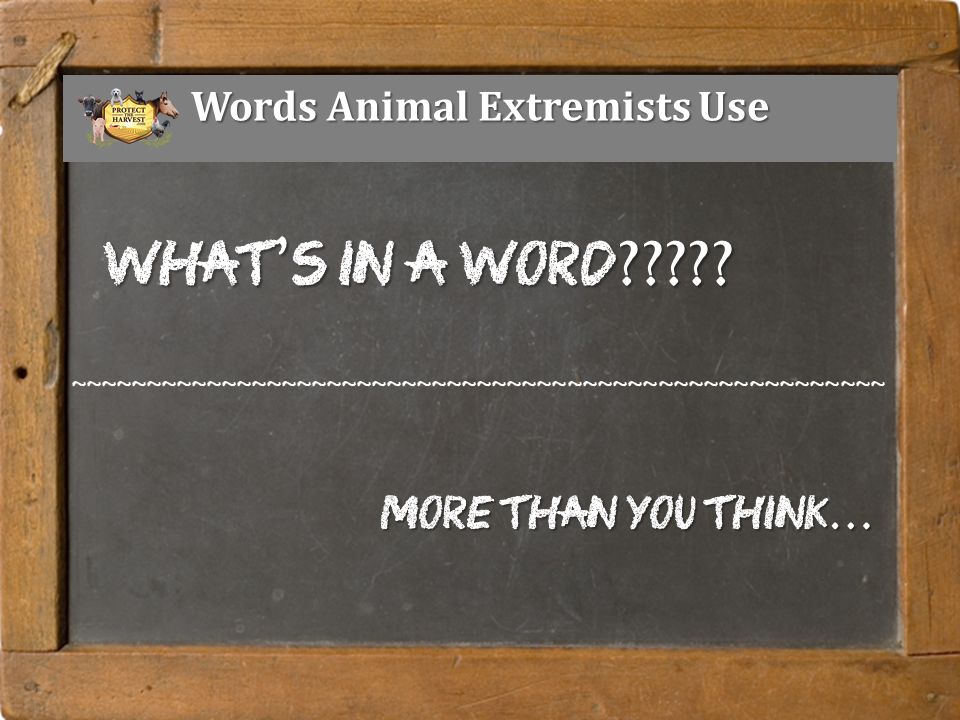 The answer may surprise you more than you think.
There are many words in the English language that have multiple meanings and those meanings can be innocent or risqué, ingenuous or manipulative, cold-hearted or compassionate. No matter what the reason for the use of the word, you can bet your last dollar that if an animal extremist uses the word, it will be done in a manipulative way, guaranteed to make a kind-hearted person open up their wallet and give that organization their last penny. These words are also used to manipulate people into believing that the use of animals and animal agriculture is bad and we all must change our diets and way of life to follow their ideology.

The definition of a lexicon is a dictionary or the vocabulary of a language, a people or a subject. For example, we all know that medical doctors have a different language all their own; that list of words is a medical lexicon. There are lexicons for every conceivable language and animal extremism is no different. However, their lexicon uses many everyday terms in a way that, while being an actual definition of a word, adds negative emotions and connotations to it. An example of such a would be “exploit,” which is both a noun and a verb. As a noun, it’s meaning according to Merriam-Webster dictionary is a notable, memorable, or heroic act. Exploit is also a transitive verb meaning to make productive use of (or utilize); or to make use of meanly or unfairly for one’s own advantage. It’s safe to say that animal extremist groups “exploit” caring people by subjecting them to “exploitive” language guaranteed to make them feel guilty enough to open their pocketbooks.

We will be adding to this article as we come across more language used by animal extremist groups to better help our readers prepare themselves for the continued onslaught of emotional pleas to “help save the animals” and to adopt a diet free of animal protein.
Knowing their “language” and how they use it to manipulate emotions, garner generous donations, and give people feelings of guilt helps us stay better informed. Their use of emotionally targeted words to instill guilt on those who are not “helping the animals,” or those that utilize food, fiber, and pharmaceuticals is unfair and manipulative. This lexicon helps one to recognize whether a group or individual has an animal extremist ideology, and gives one the tools to address their arguments head-on.

Animal extremists use anthropomorphism to influence kind-hearted individuals to accept that what they say is truth. Anthropomorphism is the projection of our human thoughts, emotions, and/or characteristics onto animals. Animal extremists use words without qualification when referring to animals that implicitly invites the listeners to think the words mean the same for animals as for humans. “Mother” may have a common meaning for animals and humans in terms of genealogy and reproductive biology, but it also has an additional unique meaning for humans that is not shared with any animal.

An example of the manipulative language is the innocuous “fur baby.” It is normal to have a loving relationship with your pet, and for many, their pet is their sole companion. Many people have bottle-raised puppies and kittens, taught them how to be a cat or dog, and may call themselves that animal’s mother. However, your dog or cat is not your spouse, mother, or child. The term “fur baby” can be used to manipulate people to open their wallets, sign a petition, or begin protesting about animal abuse, even when there is none.

Other words extremists use connote some of humanity’s most brutal treatment of humans such as: concentration camp, massacre, murder, sexual abuse, and slavery. These words are liberally applied when discussing animal agriculture and animal ownership. A phrase you may hear from them is that a large modern farm is a concentration camp where animals are massacred, murdered, ‘sexually abused, and are slaves. These are obviously negative connotations which make the naïve think that farm animals are abused.

There are those who believe the simple act of owning a pet make the owner a slave owner. Those who have pets realize that the reverse is usually the reality, they are slaves to their pet.

It is a shame that so many people are unaware of the outright horrid comments animal extremists make, yet it’s through those comments we see how they manipulate compassionate people. Below are a few of the more callous comments made trying to dehumanize people and humanize animals in the past few decades.

● "We have no ethical obligation to preserve the different breeds of livestock produced through selective breeding. . One generation and out. We have no problem with the extinction of domestic animals. They are creations of human selective breeding." Wayne Pacelle, Senior VP of Humane Society of the US, formerly of Friends of Animals and Fund for Animals, Animal People, May, 1993
● When asked if he envisioned a future without pets, “If I had my personal view, perhaps that might take hold. In fact, I don’t want to see another dog or cat born.” Wayne Pacelle quoted in Bloodties: Nature, Culture and the Hunt by Ted Kerasote, 1993, p. 266.
● "I'm not only uninterested in having children. I am opposed to having children. Having a purebred human baby is like having a purebred dog; it is nothing but vanity, human vanity." Ingrid Newkirk, PeTA's founder and president, New Yorker magazine, April 23, 2003
● "We are not superior. There are no clear distinctions between us and animals." Michael W. Fox, (Washingtonian Magazine, February 1990)
● "Six million people died in concentration camps, but six billion broiler chickens will die this year in slaughterhouses." Ingrid Newkirk, founder, president and former national director, People for the Ethical Treatment of Animals, as quoted in Chip Brown, "She's A Portrait of Zealotry in Plastic Shoes," Washington Post, November 13, 1983, p. B10.
● "Every woman ensconced in fur should endure a rape so vicious that it scars them forever. While every man entrenched in fur should suffer an anal raping so horrific that they become disemboweled. Every rodeo cowboy and matador should be gored to death, while circus abusers are trampled by elephants and mauled by tigers. And, lastly, may irony shine its esoteric head in the form of animal researchers catching debilitating diseases and painfully withering away because research dollars that could have been used to treat them was wasted on the barbaric, unscientific practice vivisection." Gary Yourofsky, PeTA Humane Education Lecturer, quoted in the University of Southern Indiana Student Newspaper, The Shield, January 24, 2008
● "There is no difference between sitting around the pit watching dogs fight and sitting around a summer barbecue roasting the corpses of tortured animals or enjoying the dairy or eggs from tortured animals." Gary Francione, Animal Rights, the Abolitionist Approach, July 12, 2011
● "... nothing is more important than promoting veganism." Paul Shapiro, who heads HSUS' anti-Factory Farm Campaign, addressing the National Student Animal Rights Conference, University of California - Berkeley, Oct. 31, 2004
● "Everything we are doing lays the foundation for the one day when animals will have rights... We need to get in their faces and sue the animal users so often they don't know which courtroom they're supposed to appear in next." Valerie Stanley, ALDF Attorney, 1996
● "We do not have the right to use animals for any real or perceived need, whether it be food, clothing, entertainment, medical issues." Janine Motta, treasurer of the New Jersey Animal Rights Alliance, Asbury Park Press. November 14, 2007
● "Any state with an initiative process is on our radar." Jennifer Hillman, Humane Society of the United States, TAFA
● "I have no problem with breaking and entering, destroying labs, burning buildings, and busting open cages." Camille Hankins, Win Animals Rights and spokesperson for Animal Liberation Front, AR 2010.
● "And you know, when people killed Nazis to liberate people who were held captive in concentration camps, nobody thought that was wrong. The animals are in concentration camps and suppose we kill human Nazis to liberate them, why is that wrong?" Dr. Steven Best, KLRC radio interview, Salt Lake City, UT 4/1/10

These comments help illustrate why it is imperative that we learn the lexicon of the animal extremist groups to better educate ourselves moving forward, and to prevent ourselves from falling into a trap set by these groups.

We have barely scratched the surface of the animal/vegan extremist lexicon. We will be adding to the very long list of definitions that the extremist groups corrupt to suit their own agenda.
Although it may seem alarmist language on our part, we have shown time and again, that if we are not kept up to date with their tactics, they win. We can no longer sit back and be complacent. Knowing their language corruptions and how they use that corruption to prey on the emotions of kind-hearted people, will help stop their forward movement.

Links to Definitions in Lexicon: