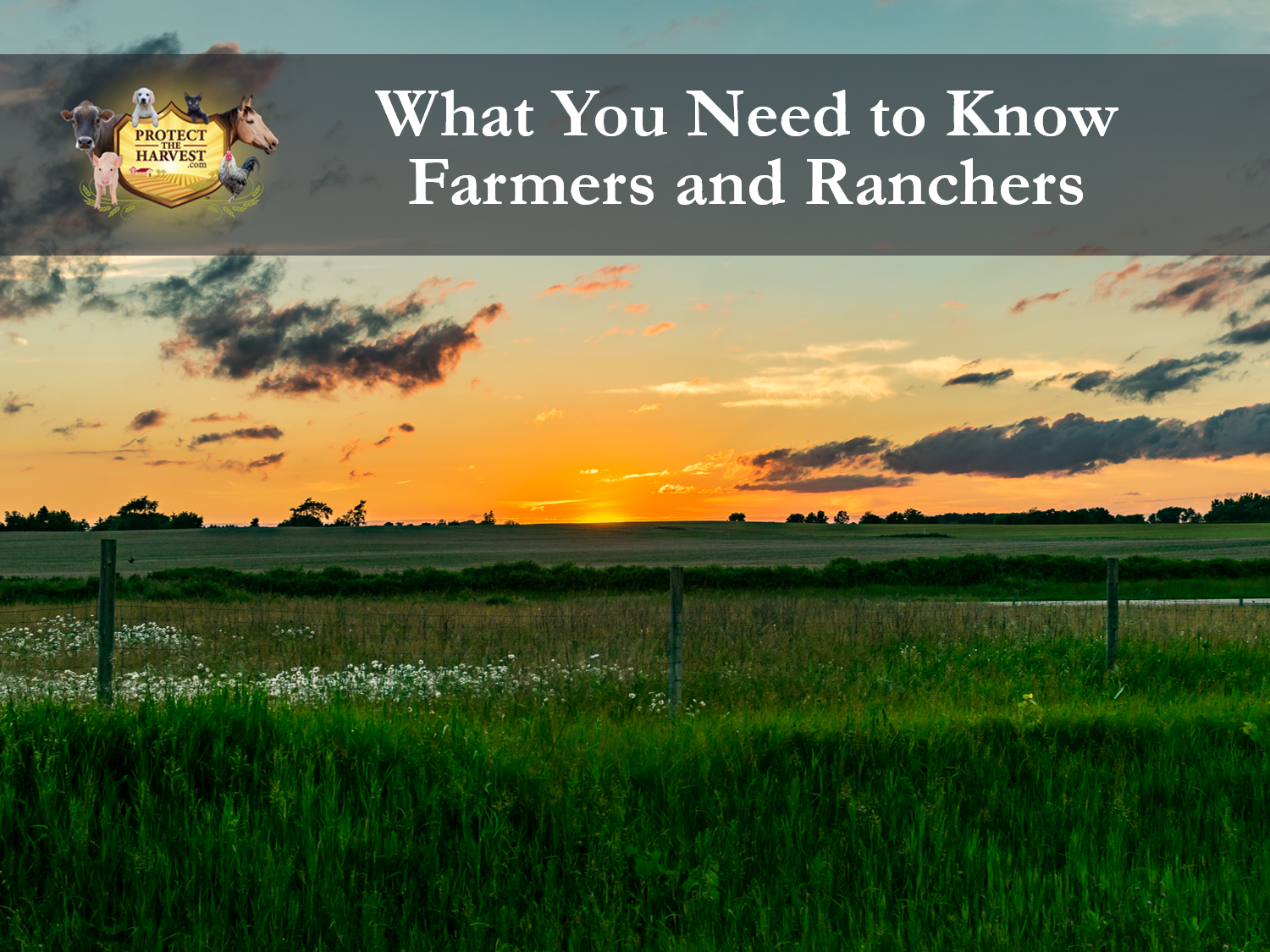 What You Need To Know - Farmers and Ranchers

Farmers and ranchers take pride in the products they provide our nation and our world. They do this by both embracing innovation and following best practices passed down through the generations. They work to improve efficiency which conserves valuable land and water and other resources while producing excellent products today’s consumers demand. The production of the highest quality products cannot be achieved without careful and ongoing focus on animal welfare. However, despite their efforts, farmers and ranchers are facing constant challenges by non-governmental agencies (NGO’s). 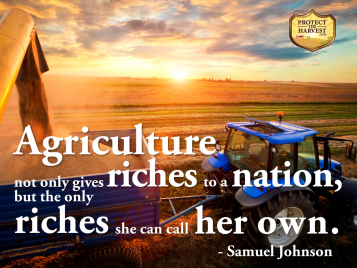 Our population is expected to grow to almost 10 billion people in the next 30 years and we must band together as an industry to support our agriculture producers, whether they produce food or fiber.

One of Protect The Harvest’s core values includes educating the public about the difference between animal welfare and animal extremism. Animal welfare is a common sense approach that animals should be treated well, and that animal cruelty is wrong. Animal welfare standards and guidelines for animal use and management are based on sound veterinary and animal husbandry experience, research and practices.

Animal extremists and their groups believe in the ideology that there is no distinction between animals and humans. They view animal ownership as exploitation and slavery. The true goal of animal extremist groups is to work for legislation and humane care only until all animals are no longer owned or utilized by human beings.

For additional information about the difference between animal welfare and animal rights, click here.

Over the last decade, animal extremist organizations such as the Humane Society of the United States, American Society for the Prevention of Cruelty to Animals (ASPCA), People for the Ethical Treatment of Animals (PETA), and Direct Action Everywhere (DxE)have launched an unprecedented effort to eliminate animal agriculture. They hope to weaken consumer confidence in our food supply. They do this by working to limit the types of technology and practices farmers and ranchers can use. The goal of the HSUS and its allies is to make animals more expensive to raise and, consequently, increase the cost of protein essential for a healthy population. Ultimately, their goal is to make animal protein products too expensive for Americans to afford.

They work towards this goal in four basic ways:

In 2018, an initiative in California called Prop 12 was written, funded and marketed by a coalition of animal extremist groups. It intended to “eliminate cages” for laying hens, veal calves and pregnant sows. Despite what they have led voters to believe, this mandate does not improve animal welfare and in fact, it puts the welfare of animals in agriculture at risk. 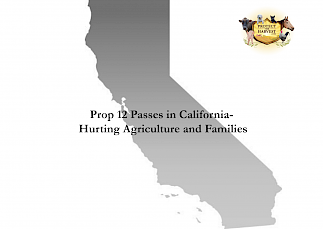 Prop 12 does not simply impact California producers, it impacts all producers that wish to sell their products in California. Prop 12 also mandates that any products sold in California must comply with the same rules – which regulates out of state producers. The proposition passed in California on November 6th, 2018. 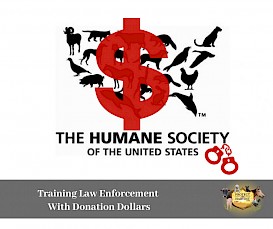 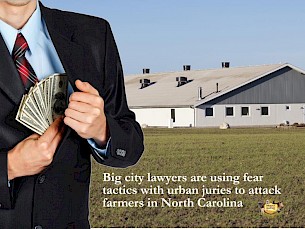 Animal extremist groups are known to engage in financially ruinous lawsuits, even when the farm followed all laws and regulations in that state. They know that farmers and ranchers live on a tight budget, by challenging them in court and forcing them to defend themselves, they know that they may have a chance to be victorious even on unethical terms.

For example, there is a series of lawsuits filed to intimidate America’s pork industry. Lawyers from out of state shopped for clients to attack and sue farmers in North Carolina. As of December 2018, several lawsuits have been before the court and many more have been filed, all by the same law firm.
Click here to read more about the lawsuits.

Non-Governmental Organizations are also working to take control of the land’s natural resources by edging farmers and ranchers out. This can be seen on our American Rangelands where wild horse “advocates” block all efforts to manage their numbers and call for the removal of domestic grazing animals against all research that supports positive impact on the land.

Protect The Harvest has been a steady advocate for the multiple use of federal lands since its beginning. The extreme overpopulation of wild horses has decimated wildlife, rangelands, and water sources. As of March 2020, the BLM there are approximately 95,000 horses on BLM managed lands. This is three times the number recommended by wildlife biologists for a healthy ecosystem (27,000). There are an additional 51,000 horses that are in government holding facilities that are costing taxpayers over $50,000,000 per year to feed. With the horse herds doubling in size every 4-5 years and the rangelands already damaged and over-burdened, the BLM needs to have a variety of options available to properly manage them.

Additional information regarding the crisis on American rangelands and our initiative to provide assistance to the BLM in their efforts to manage wild horse populations can be found HERE.

Additionally, environmental groups are taking aim at farmers and ranchers in an effort to impose more stringent regulations. As seen in 2017, John Duarte, a California farmer, was fined for plowing a field that contained vernal pools. He was charged with violating the “Waters of the United States” provision of the Clean Water Act. He ended up settling the case to protect his family and nursery business from financial ruin. 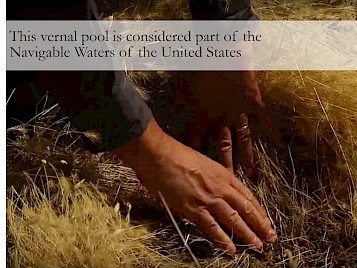 In a time when our population is growing at a high rate, farmers and ranchers are being asked to provide enough food for over 9 billion people by 2050. And as the saying goes: “Food grows where water flows”. However, some environmental groups are trying to make that task more difficult and one way in which they are doing so, is by working to control our water resources. For example, in California, a state where a majority of the nation’s food products are produced, an amendment to the Water Quality Control Plan for the San Francisco Bay/Sacramento-San Joaquin Delta Estuary is being proposed. This amendment would affect agriculture within California in a negative way.

A comment by the Bureau of Reclamation points out that the amendments proposed by the California State Water Resources Control Board (CSWRCB) elevates fish and wildlife purposes over irrigation and domestic purposes, which is contrary to the prioritization scheme established by Congress. 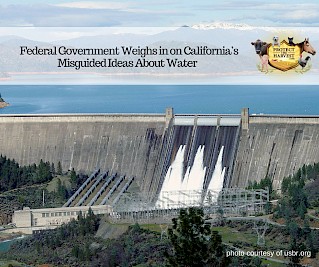 Our Food Supply is At Risk 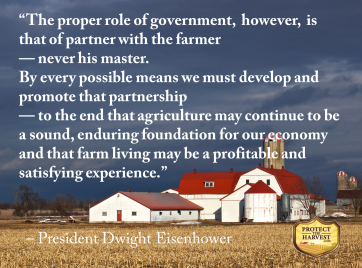 The efforts of these non-governmental agencies, if successful, will not only make food more expensive, but will also threaten the safety and accessibility of America’s food supply. 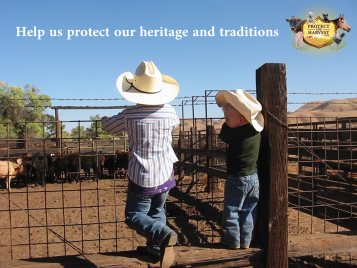