GUARDIANSHIP INSTEAD OF OWNERSHIP IS HARMFUL TO ANIMALS 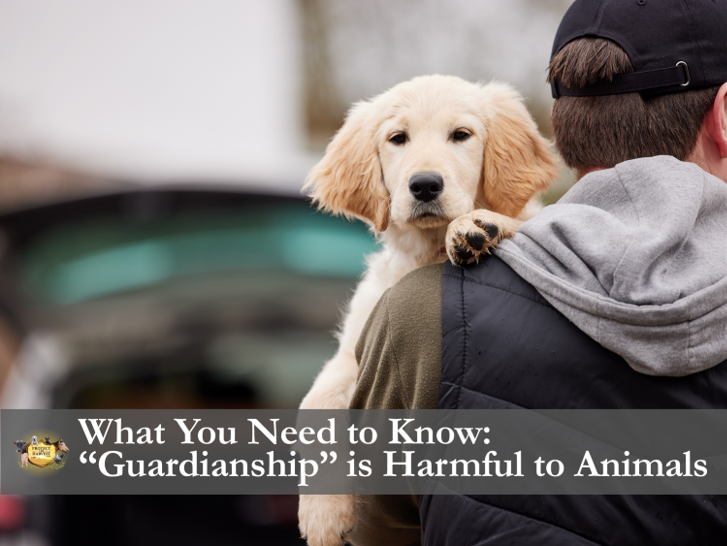 Why Animal Guardianship is Harmful to Animals

Animal Extremists LOVE to use language that seems innocuous to trip up well-intentioned people and push their agenda and ideology. Unfortunately, they have been successful in duping people ranging from lawmakers to pet owners and even some people in the veterinary industry. One of their current tactics is to push for the reclassification of animal owners to animal guardians. The term animal guardian is dangerous and could have long lasting and far-reaching implications for animals, animal owners, and veterinary medicine.

Under the law, animals are considered property. They are “owned” by individuals who are called to protect them, care for them humanely, give them veterinary treatments as needed, provide sufficient food and water, and when the time comes, end their lives in a humane manner. Those are the basics. If an individual wants to do more for them, that is their prerogative, but it is not required by law.
Animal extremists, however, are pushing to end the designation that animals are property. These ideologues are determined to reclassify animals so they can achieve “personhood.” To do so, they are changing the lexicon to include actual legal terms, like guardianship. This is troubling as we will further point out.

“Pet Guardian” or “Pet Parent” is the new way some groups and even pet food companies are referring to animal owners in their advertisements and marketing materials. Instead of being a pet owner, you are a “pet parent” or “guardian.” This tactic is used to elevate animals, invoke emotional responses, and supposedly has a less negative ring to it. However, there are those who strongly caution against using these terms and for good reason.

As early as 2005, the American Veterinary Medical Association (AVMA) addressed this very issue. The organization representing over 97,000 member veterinarians nationally still finds this subject applicable as recently as November of 2019.

Their stance reads:
“Some animal owners may like to refer to themselves as "pet guardians," however "guardian" is a legal term that has significant legal implications and repercussions. Its use to describe the relationship between animals and their owners is inappropriate. Under well-developed principles of guardianship law, guardianship is a fiduciary relationship (the highest legal civil duty owed by one person to another). The ward's interests are always to prevail over those of the guardian. Some conflicts that arise from application of human guardianship law to animals are described in the text that follows. On the basis of these conflicts, the American Veterinary Medical Association (AVMA) recommends that "guardian" not be adopted, even to semantically describe the relationship between humans and their animals.

The AVMA recognizes that our American society has evolved from an agrarian one in which the animals most of us owned primarily had economic utility, to an urban one in which most of us derive some emotional value from our animals. Use of guardian, however, does not clarify the responsibilities of owners to their animals that are important for forming good human-animal bonds. Instead, use of guardian may create legal questions and consequences that have the potential to adversely affect both the animals and humans involved in these relationships. Such legal questions and consequences apply not only to animal owners and service providers, but also to our society and the animals. These include, but are not limited to:

“To lawyers, ‘guardian’ has a considerable amount of legal significance. Ownership and guardianship are not matters of semantics; they’re not interchangeable terms.”

In an article in dvm360 magazine, dated 12/31/2010, veterinarians across the country weighed in on the language change. Both veterinarians and the AVMA said that animal guardianship is not in the best interest of owners or animals.
Over the years, the role of some animals has shifted from an agricultural use to that of a companion. The AVMA has stated that changing from ownership to guardianship could result in more litigation, higher costs of animal care, and fewer people adopting animals.

Dr. John Scamahorn, who owns a mixed-animal (small animals and livestock) practice in Indiana, agrees with AVMA’s stance saying:
"I look at guardians as those looking after my mother. I don't know that it could be applied to animals," he says, adding he thinks veterinarians will get caught in the middle.
"Ownership is clear cut. The owner can authorize treatment. Guardianship puts another spin on things," Scamahorn says. "The animals they are trying to protect could actually end up suffering while trying to sort out who is authorized to elect care."

Dr. Ron Cott, veterinarian and retired associate dean at the University of Missouri College of Veterinary Medicine, also is against making the change saying:
"There are a lot of legal implications when you give them [pets] rights. You become the guardian and they are the ward," he says. "Say it costs $3,000 to do a procedure. You are going to be forced to do it, even if you don't have the money. The neighbor down the street could find out you aren't doing it and take you to court for cruelty to animals."

In a blog on Embrace Pet insurance’s website, Dr. Patty Khuly, VMD, gave her opinion on the subject:
“‘Guardianship’ means that you are put in charge of your pet’s health and well-being for the rest of her life. Consequently, in the eyes of the law, she’d look more like your child and less like your refrigerator. But while it seems a sound principle for those of us who already treat our pets like children, changing this designation legally can get tricky.
Currently, if your cat breaks her leg, you’re legally allowed to elect any approach to its treatment as long as it’s considered roughly humane. You may even elect for no intervention at all, allowing her to slowly limp her way back to a reasonable state of functionality. Few jurisdictions would challenge your right to do so unless someone complained that you were allowing your pet to suffer (and it might be hard to prove that she was).
Meanwhile, under guardianship laws, you would be unable to forgo full assessment of her condition (including X-rays or any other means to determine her condition) before a licensed vet could legally treat her or euthanize her. If you had no money to treat her adequately (to alleviate her pain, at least), you would be required to euthanize her. Although this sounds horrible, it would be the humane thing to do and most of us would be on board with this effect of our new guardianship status.

If, however, euthanasia is considered too harsh an outcome (for example, when life-saving measures are readily available), a guardian would be liable for any reasonable treatment required to make her well again –– whether you wanted to spend the money or not.”

The American Kennel Club (AKC) published a brochure titled, “Be Your Dog’s Owner, Not its Guardian”. The article outlined four main challenges that bolster their viewpoint against classifying animal owners as guardians:

Most importantly, the AKC states changing the classification of dogs as property sets a very dangerous legal precedent. By declassifying animals as property, it raises their legal status. Many extremist groups seek to convince the courts that animals have rights and should have the same status as humans.

It is obvious that using the term “animal guardian” instead of animal owner has ramifications most owners do not consider.
“Guardians” would be required to pursue veterinary treatment regardless of cost or could be forced to euthanize an animal. They would no longer be allowed to decide to either spay or neuter the animal or abstain from spaying or neutering. Guardians could lose the ability to file malpractice against a veterinarian since the animal is no longer property.

Owning or keeping animals may become burdensome with consequent negative impacts on animal-related industries, including loss of jobs. Financially, it could cause people to no longer keep their animals or adopt or purchase replacement animals.

Legal guardianship is a dangerous legal precedent. By giving legal rights to animals, we play into the animal extremists’ hand. It becomes the first step in the larger campaign of ending the keeping of pets, raising livestock, and breeding altogether.

Don’t allow animal extremists to use animals as a pawn in their ultimate game of ending animal use as food, fiber, companionship, entertainment or service.