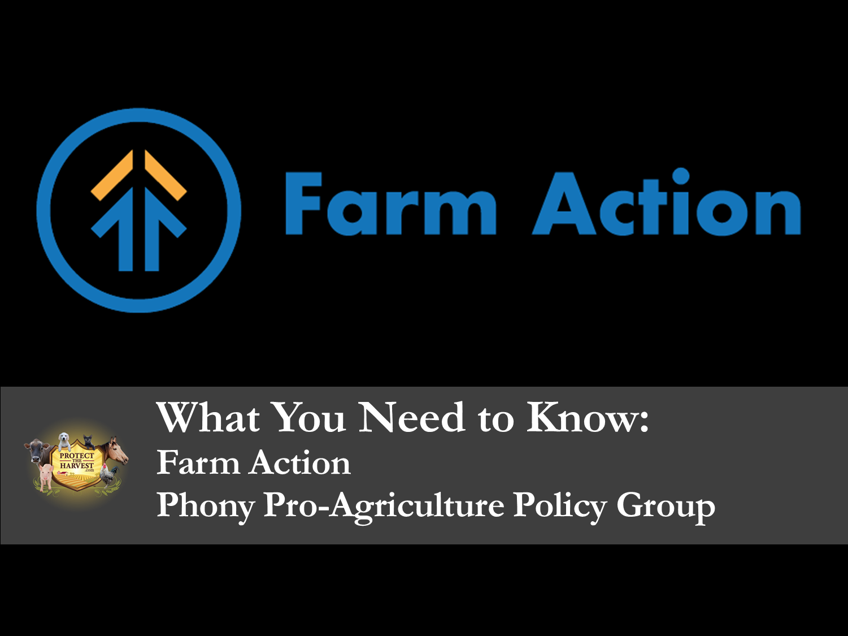 Recently a group masquerading as a being pro-agriculture and pro-farmer came across our radar. Farm Action is their name and they shared a press release accusing large meatpackers of intentionally causing “fake shortages” amid the pandemic and turbulent economy.

Their explanation for retail shortages involved political systems, the USDA, and the meat processing sector as being “able to distort our political economy at the cost of producers, consumers, and – in this instance – the very safety of our food-system workers.”

“The USDA has a long history of operating as a revolving door for executives from large food corporations and other industry representatives, and this practice is especially pronounced in the meatpacking industry.”

Not only are these statements incorrect and grossly misleading, but they serve to villainize animal protein in line with the animal extremist agenda.

Who is Farm Action?

Farm Action, formerly Family Farm Action Alliance, is a relatively new NGO vying to influence agriculture policy with its ideology and agenda. Despite their name, they are not on the side of most American farmers. In fact, they appear to be against all mid to large-scale forms of food production.

The co-founder and President of Farm Action is Joe Maxwell. Maxwell has been openly involved with big players in the animal extremist movement for years. He was the former Humane Society of the United States (HSUS) Vice President of Outreach and Engagement, a branch of the group which is known for launching anti-farming and general anti-agriculture campaigns through activism and “education.” At one time he was also the Senior Political Director of the HSUS legal arm, the Humane Legislative Fund.

Ironically enough, Maxwell was at one time CEO of Heritage Acres, a pork producer, that was cited over 150 times for various non-compliance violations, some of which included animal welfare and food safety issues. The company was also involved with Tai Shin Foods, a Taiwanese entity that also faced similar citations from the USDA.

While he has moved on to Farm Action, Maxwell has remained involved with HSUS activities. As recently as 2021, he was a speaker at the Kirkpatrick Foundation’s third triennial ANIMAL Conference alongside other extremists such as Wayne Pacelle who was the former HSUS CEO, Brent Toellner of Best Friends Animal Society, and Animal Legal Defense Fund attorney Kathleen Wood.

The title of Maxwell’s presentation was “The Truth About Industrial Agriculture: A Fragile System Propped Up by Myths and Hidden Costs.” The presentation involved him sharing false narratives about farms and companies that he considered “Big Ag” and “Big Industrial Ag.”

During his political tenure, Maxwell served as Missouri Lieutenant Governor. Afterward, he leveraged that experience to fiercely fight against Missouri Amendment 1 in 2014 (which was supported by the authentic pro-farming group Missouri Farmers Care), which would protect the state’s family farmers from out-of-state animal extremists wishing to push their agendas through political control.

Farm Action co-founder, Angela Huffman, is also a former HSUS employee where she worked as the Market Development Specialist for Rural Development and Outreach for over three years.

Perhaps most concerning is the group’s political alliances. The website’s “About Us” page features Senator Cory Booker giving a testimony about how Farm Action “inspired him to take on corporate monopolies.”

Besides Booker, the group has also received support from known agriculture antagonists including Elizabeth Warren, Bernie Sanders, and Amy Klobuchar. Also of note, Farm Action is itself a supporter of the anti-large scale agriculture Farm System Reform Act.

“Our mission keeps the interconnectedness of the land, animals, workers, farmers, ranchers, and communities at the forefront of this fight,” reads the group’s website statement.
It is pretty clear that this group does not represent nor care about the well-being of farmers and ranchers who feed our nation.

The Truth About the Animal Protein Market

While the recent pandemic posed a lot of unique challenges to the meat sector, the root of it was more in the supply chain and less on corporate conspiracy theories. Amid the crisis, there was also action taken to amend the issues.

Don’t Fall for the Lies

Unfortunately, we are seeing more new players like Farm Action on the field who try to masquerade as authentic groups “looking out for the little guy” and on the side of “family farmers.” The faces behind these groups along with their checkered pasts benefitting from extremist groups are always very telling about where their true motivation lies. When vetting these kinds of groups, be sure to get familiar with their leadership, past affiliations, and the type of policies and actions they support.

Most authentic groups who support all types of farmers and agriculture are aligned with reputable industry associations and groups – not animal or environmental extremists. Don’t be fooled by pro-agriculture-sounding names or promises of making things better for farmers and consumers without seeing what lies below the surface.