HORSES AND PONIES: NOT HOTHOUSE FLOWERS 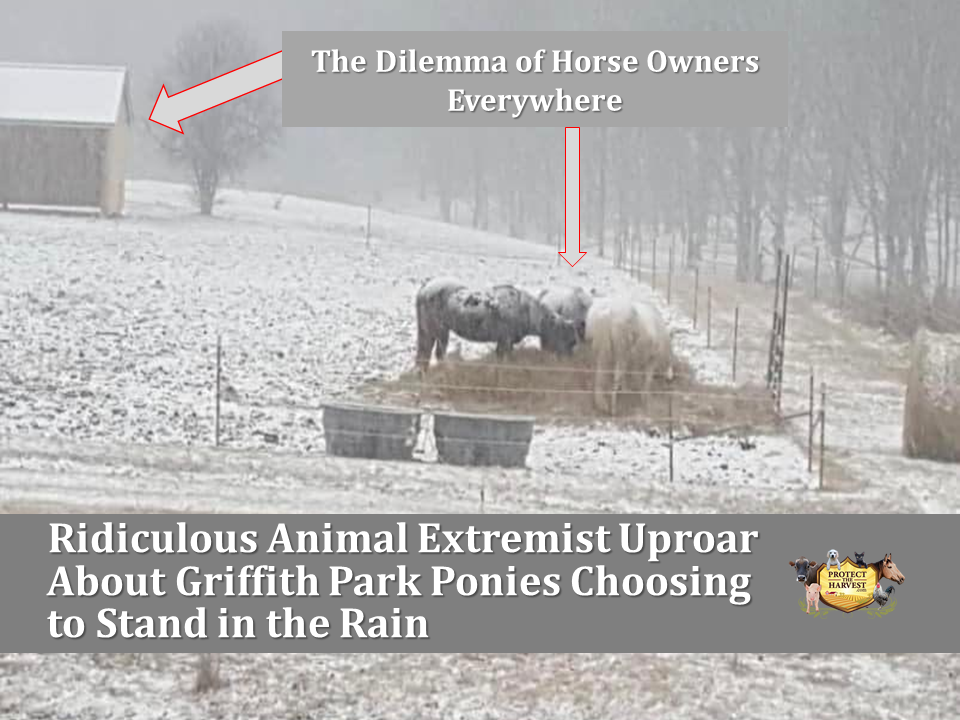 Horses are naturally herd animals and have existed in the outdoors with no shelter for thousands of years. They are uniquely equipped to tolerate harsh, cold temperatures as well as wet, even boggy, conditions. For horse owners, one of the standard head-scratchers is the warm, inviting barn stall filled with fresh, dry bedding and your horses are outside in the rain, sleet and snow.

It should come as no surprise that the animal extremist group targeting the Griffith Park Pony Rides are now circulating a video they took of ponies standing out in the rain on Monday, December 27, 2021 in 50° weather, and claiming abuse.

Facts Don’t Matter to Them

Facts are not important to Los Angeles Alliance for Animals because facts don’t support their narrative. The fact that there is a covered shelter in each of eight pony corrals doesn’t mean anything to them. Nor does the fact that 1/3 of the pony herd, those who are older and thus might be affected by cold, wet weather, were inside the barn, protected from the elements. They also don’t seem to understand that these ponies, Shetland and Welsh ponies, are descended from ponies in Scotland and Wales.

The Shetland Pony is hardy and strong, in part because it developed in the harsh conditions of the Shetland Isles. It has a heavy double coat (thick undercoat, covered by long guard hairs) and short, strong legs also covered with thick, heavy hair to protect it from the brambles and extreme temperatures of the Shetland Isles.
There is evidence that native ponies existed in Wales before 1600 BC and roamed as semi-feral, climbing mountains, leaping ditches and running over rough moors. They also developed into a hardy breed due to harsh climate, limited shelter and sparse vegetation. Anyone who has ever had a pony knows they can “gain weight on air.”

Horses and ponies are herd animals, and most prefer to live within a herd environment because they can choose to stand together for warmth, protection from flies or companionship. They also can choose to stand alone.
The pony corrals at Griffith Park are large enough for the ponies to move freely around, interacting with each other or not, standing under shelter or not, and just being ponies. Unlike some dogs and cats that live in a house, ponies can stand temperatures down below freezing as long as they have a thick winter coat.

Winter Coats Protect Horses and Ponies from Wet and Cold

A horse’s coat is made of two types of hair: a fluffy, dense undercoat and a stiffer protective coat called guard hairs. The undercoat insulates the horse by trapping warm body heat between the skin and cold air. Guard hairs keep the undercoat clean, shed rain and hold moisture to prevent it from getting to the undercoat.

Long winter hairs are attached to a layer of muscle that moves the hair as needed for additional insulation. Each hair can stand up or lay down and be turned in a particular direction. When the hair is standing, your horse looks fat and puffy, which allows more space to trap and warm the air. When the hairs lay down, they act more like a cooling device and the warm air is moved away from the horse’s body. The hairs can also be “pointed” in a certain direction to help deflect wind and weather. When it rains, most water hitting a winter coat runs off, and the coat will withstand quite a bit of water before soaking through to the skin.

Even living in the snow, horses rarely get frostbite. The muzzle has plenty of blood vessels to keep it warm and their long head (and nasal passage with bone spirals and an air pouch) warm the cold air before it reaches the lungs. The legs below the knees are bone and tendon which need less of a blood supply, and the thick hair keeps the legs insulated. Even the hooves are designed to withstand cold; shunts open up and blood from the smallest arteries flows directly into veins to keep the hoof warm.

Requirements for Horses and Ponies

University of California Davis, home of one of the premiere equine veterinary schools in the U.S., has compiled a Minimum Standards for Equine Care pamphlet to be used by Animal Control and Peace Officers to help determine if a horse is being cared for properly. Based on their requirements, it is apparent that the Griffith Park ponies are cared for at a higher level than minimum requirements.

Griffith Park Ponies Are Not Suffering

Once again, animal extremists are spouting off inaccuracies, trying to stir the popular opinion of good-hearted people who are uneducated about horses in general. These ponies are not suffering. They are happy and healthy and leading lives knowing that all of their needs are met.

The ponies have plenty of access to clean, fresh water in spotless water troughs and waterers, they are fed according to their nutritional needs, given supplements prescribed by their veterinarian, receive routine and emergency vet care as needed, have a shelter that covers them in their pens (whether the ponies choose to use the shelters is another story) and are checked out and groomed daily by those that know them best: the staff who work hands on with the ponies on a daily basis.

There have been multiple inspections by different agencies, some announced, most are surprise inspections and every time, Griffith Park Pony Rides has passed the inspection. The owner and his managers are very concerned for their ponies, the safety of both ponies and children, and work hard to keep it a nice, clean, family facility.

These ponies help children learn about animals, how it feels to ride on them, what their fur feels like, what they smell like (perfume to any horse lover!). If Los Angeles Alliance for Animals has its way, these pony rides will be a thing of the past. It would be a shame for that to happen.

Link to UC Davis’ “A Guide: Minimum Standards of Horse Care in the State of California” https://vetext.vetmed.ucdavis.edu/sites/g/files/dgvnsk5616/files/inline-files/California-Minimum-Standards-2019.pdf