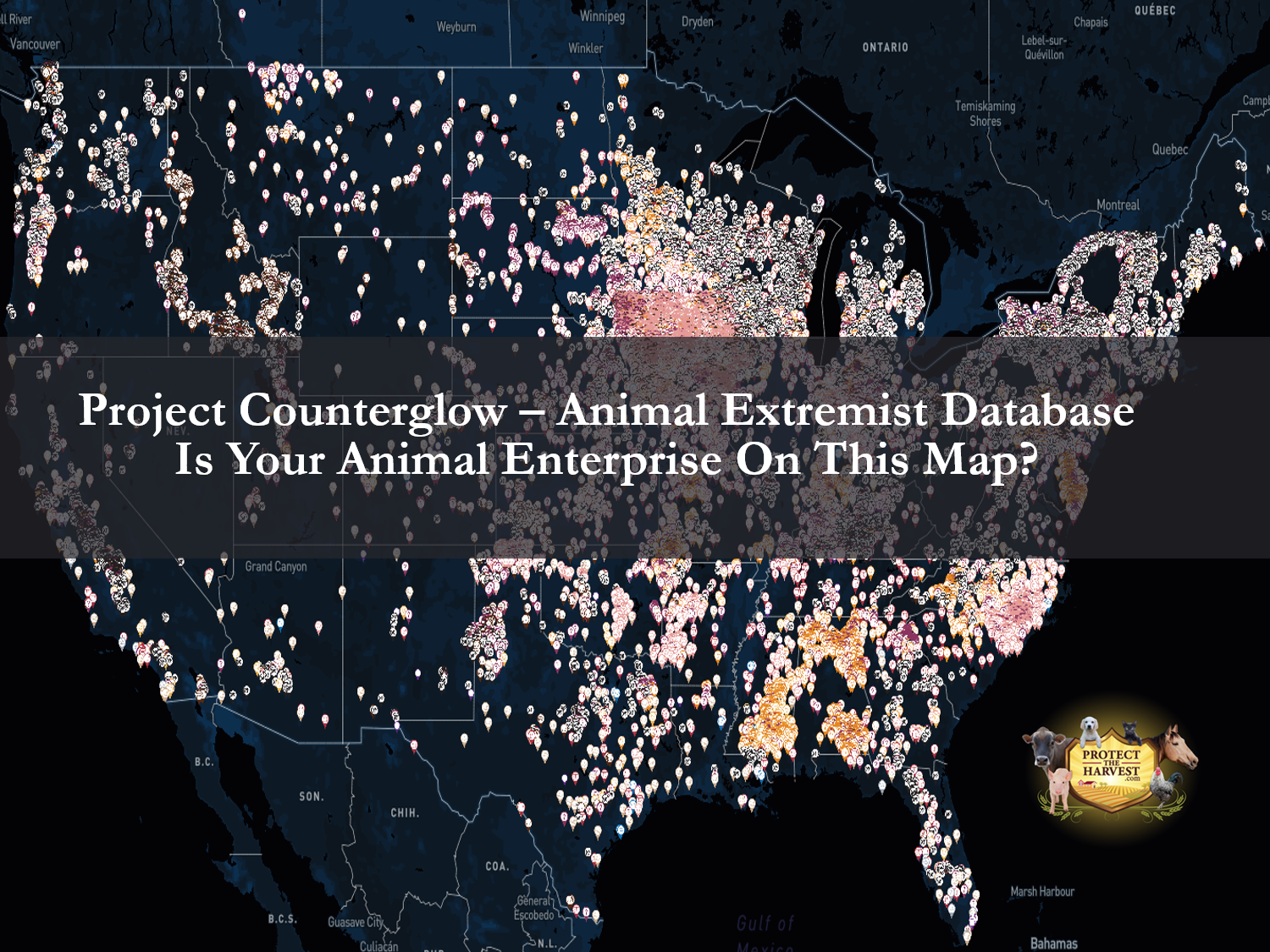 Alleen Brown published an article in The Intercept on May 31, 2020, regarding the newly presented “Project Counterglow”. The Intercept is an independent online news publication that describes itself as “fearless, adversarial journalism that holds the powerful accountable”. Brown states that Project Counterglow is meant to offer a “rare bird’s-eye view of the scale of the industry” (specifically referring to animal agriculture).

A similar project in Australia, called Farm Transparency Map, was launched last year to the outrage of Australia’s farming industry. The map was used by animal extremists to terrorize farmers and ranchers. According to The Intercept, result of that outrage “led to passage of federal legislation in Australia that criminalized the use of a website or social media to incite trespass on a farm.”

Project Counterglow is an animal extremist website that shows an interactive map with the physical addresses and gps coordinates of more than 27,500 large modern farms and animal agriculture facilities. There are 5812 of these locations identified using satellite imagery and many of these locations do not appear in public records. The map “pins” show farms with dairy, meat, poultry (meat and eggs), pigs, processing plants (some of which are cultural and ethnic plants), fur, zoos, horse facilities, and medical research facilities throughout the U.S.

Project Counterglow’s website should raise any farmer or rancher’s hackles. We, at Protect The Harvest, wanted to give you a head’s up and introduce this latest weapon offered by animal extremist groups.

Anyone Can Use the Site

One might think that a website like this would have a membership that is vetted, possibly charging for its use, however, this is not the case. Anyone can add locations or post Wikis with or without an account. The Project Counterglow website explains its goal is to offer a platform where “animal rights activists can communicate, collaborate, and network with one another to be as effective as possible in their work towards animal liberation. Whether you want to learn how to lead investigations, use certain investigative equipment, or need to network to find sanctuary for a rescued victim of animal ag, we are a one-stop-shop”.

As has been proven with multiple video “investigations”, animal extremists are not above using highly edited videos to show what they consider to be abuse. By publishing these addresses, the map puts owners and employees of these facilities in danger as well as violates their right to privacy.

Project Counterglow is the brainchild of Kecia Doolittle, a member of Direct Action Everywhere (DxE) which is an animal extremist group we have written about in the past. Doolittle is romantically involved with DxE spokesman, Matt Johnson. To learn more about DxE you can visit our website under the tab, “What You Need To Know”.

Doolittle is the leader of the team that created the map and has participated in a number of “investigations”. As we have pointed out before, animal extremists have their own language and their idea of an investigation is not subjective or competent. She is also no stranger to disrupting events. In 2019 she disrupted a May appearance of former presidential candidate Elizabeth Warren (D-IA) for her support of the Dairy PRIDE Act, calling Senator Warren a “traitor”.

Doolittle and Johnson recently posted a video on Facebook introducing Counterglow. In that video they mentioned they recently traveled to Iowa and visited farms at night. They also talked about how they have been charged with violations regarding Iowa’s farm trespass laws.

There are two main components to the website- the Counterglow Interactive Map and “Papertrail”.

Papertrail consists of various topics and forums, where users can learn and communicate with other animal extremists. Training, Facilities, Industry Groups, and Government are just a few of the topics. Included below is a brief description of each menu topic using the language on the website.

This section covers a number of topics. It teaches users how to use satellite imagery to find potential targets to “rescue” animals from or protest. It explains to users how to add farms and other facilities, and how to make Wiki posts. There is also information about operating a drone, leading a team on an “investigation”, and even getting media coverage for your actions.

The facilities section promises to help users find “dirt” on specific farms, processing plants, or other animal “exploitation facilities” from the Counterglow map.

The large industry groups menu describes this section as, “information on the groups propping up the industry. You’ll learn about their tactics, strategies, and corruption.”

This section is full of more misinformation about agriculture. It makes claims about the “government’s involvement in ‘propping up the industry’, via “subsidization” or “corrupt politicians backing harmful legislation that protects animal agriculture”.

In addition to these specific subjects, Counterglow recommends that users protect themselves and their identities by using first name or initial, and by state, not anything more specific. There’s even a welcome section on the website inviting new users to “Say Hi!”.

The interactive United States map has pins placed on every location where there is a large, modern farm, a processing plant, racetracks and even medical research facilities. Of utmost concern, this map not only contains actual physical addresses, but GPS coordinates for the facilities.

Direct Action Everywhere, or DxE, is known for their “right to rescue” principles. By posting these addresses on a non-membership site that anyone can access, the group is endangering any facility involved in animal enterprise such as animal agriculture, zoos, research facilities, and beyond. Since the satellite imagery is from 2011-2013, the Project Counterglow team recommends that users double-check with Google Maps to see if the locations or facilities are still there.

However please note, it appears that they didn’t follow this recommendation themselves as numerous discrepancies were found to exist. Some addresses that are posted were empty dirt lots or neighborhoods of newly constructed homes.

It’s Time to Fight Back

We can no longer hide from the escalating attacks on animal enterprises. The animal extremist groups are very well organized and seem to have unlimited financial resources. If you have concerns, we recommend that you contact your local officials to help fight against Project Counterglow and follow the example set by Australia.

Protect The Harvest will continue to monitor this situation, as well as other concerning issues that affect animal owners.

As a part of fighting back, at Protect The Harvest we have put together some resources that are avaialble to everyone.

As a part of our efforts to ensure people were made aware of Project Counterglow, we developed a Trifold Brochure and sent it to the individuals and businesses who were listed in the database at the time. Since the database is continuing to grow, more people need to be made aware of it and that they may be listed. 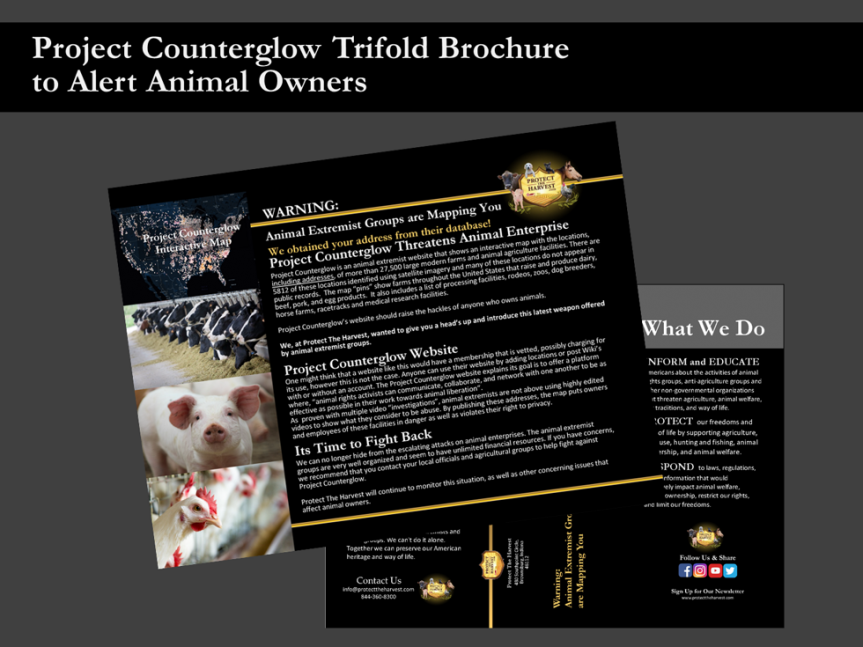 We have also developed a double-sided handout similar to the trifold brochure which supporters can download and have printed. 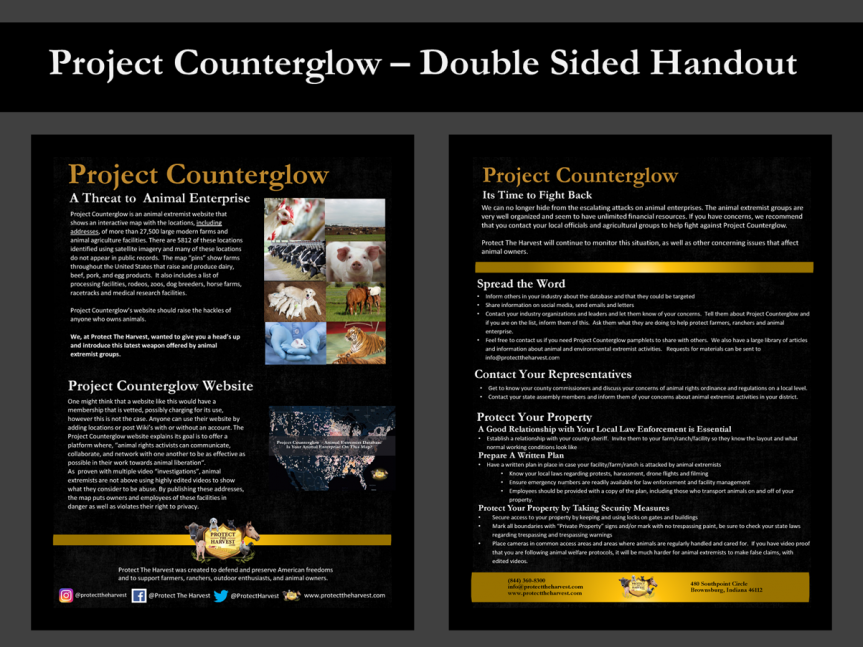