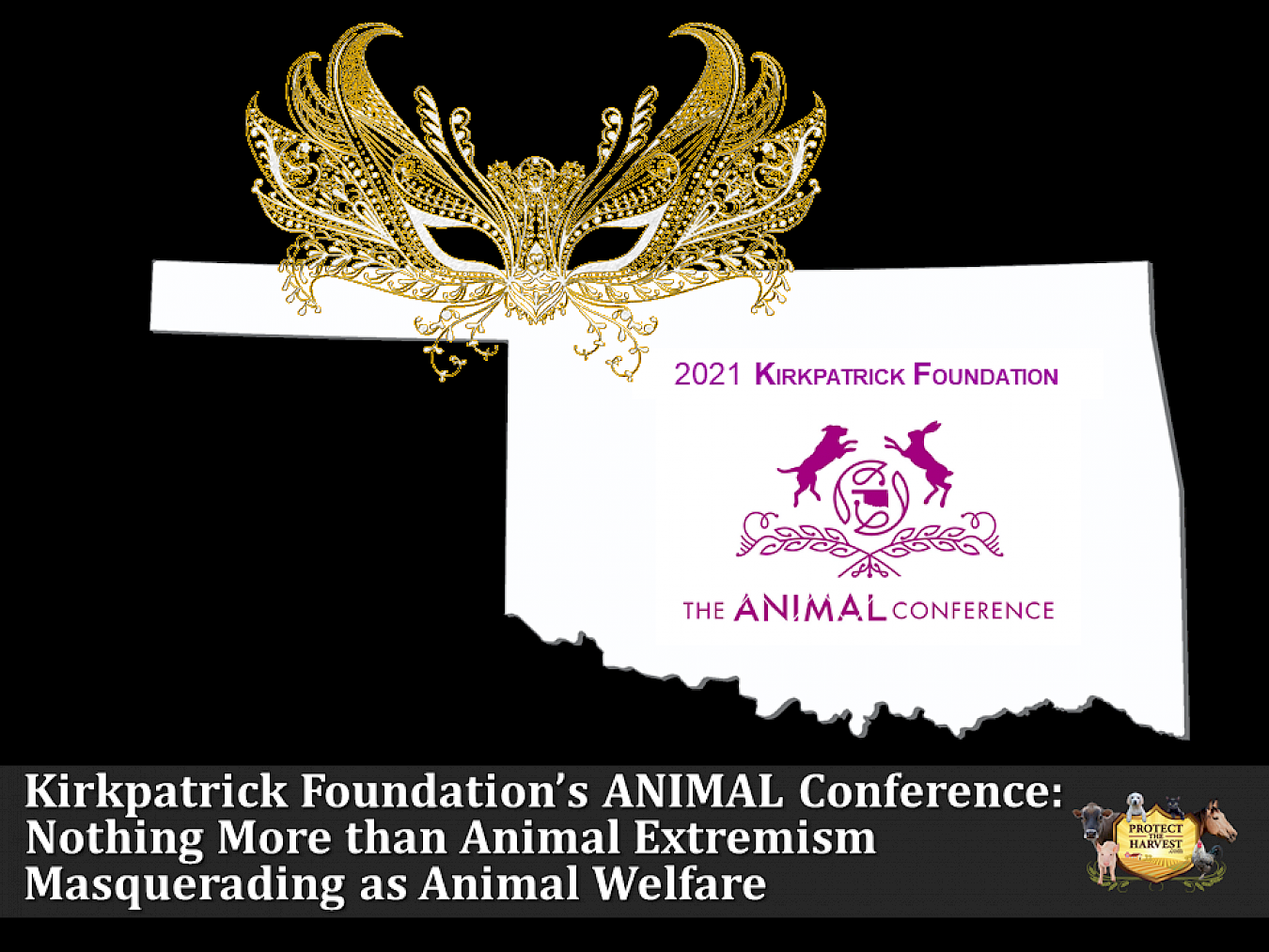 Kirkpatrick Foundation held its third triennial ANIMAL Conference on August 27 -28, 2021 at the Oklahoma Contemporary Arts Center. The focus of the conference was purported to be about animal issues of all kinds. However, after looking at the agenda topics and speakers, as well as what type of food was served, the underlying agenda became clear.

The agenda topics were also of no surprise to anyone who knows what the Kirkpatrick Foundation is currently “up to.”

First thing to catch the eye and a forewarning of what was to come was the vegan breakfast catered by Café Contemporary. In fact, all provided meals and snacks were vegan only. No surprise there since the underlying theme of the event was to abolish large modern farming. This would be a travesty since there are low income, food insecure people living in Oklahoma, just as everywhere in the world and animal proteins are extremely nutrient dense.

An event was held the Thursday before the conference for members of Common Bonds, an Oklahoma leadership network to end needless euthanasia of cats and dogs leading to the fulfillment of Best Friends Animal Society’s goal of “No Kill 2025.”

Kirkpatrick Foundation’s “Safe & Humane” initiative, supposedly started with making Oklahoma one of the safest and most humane places to be an animal by 2032 was a key component of the conference.

Philip Tedeschi opened the conference with his presentation called “Animals Forward: A One Health/Welfare Perspective On the Intersection of Human and Non-Human Animal Wellbeing.” This demonstrated how deeply the United Nations Agenda 2030 (other names - Green New Deal, Build Back Better, United Nations Sustainable Development Plan) is embedded into all aspects of animal extremism.

Other presentations at the conference included one from Joe Maxwell, the founder of Family Farm Action Alliance. His presentation was titled “The Truth About Industrial Agriculture: A Fragile System Propped Up by Myths and Hidden Costs” and included photos of livestock in what was termed “Big Ag Companies.” One of the false narratives spread in his discussion about swine was that they are given high doses of antibiotics and then humans get the antibiotics through eating pork and become resistant to antibiotics. He failed to mention one very important fact that there is a mandatory withdrawal time for all medications given, that the meat is tested for any medications, and any tainted meat is disposed of.

Maxwell also blamed the Farm Bill for driving food costs and taxes higher due to giving government subsidies and finances to “Big Industrial Ag.” He stated that large modern farms were “not helping the rural population, just big business.” He further made the claim that “U.S. small farmers could provide 70-80% of the world’s food if we could stop Big Ag Companies.”

Unfortunately, the claim that Big Ag Companies are dominating agriculture have been disproven by the USDA report which states in its conclusion:
“Farming is still overwhelmingly a family business. Ninety-eight percent of U.S. farms are family farms, and they account for 86 percent of farm production.

• Small family farms make up 90 percent of the farm count and operate almost half of the farmland. The largest share of the value of farm production (44 percent), however, occurs on large-scale family farms. Small farms account for over half the value of poultry and hay production.”
https://www.ers.usda.gov/webdocs/publications/100012/eib-220.pdf?v=4337.9

Other topics presented at the conference:
● “The Rise of Plant Based Foods and What it Can Mean for Animals” presented by Rachel Dreskin CEO Plant Based Foods Association
● “From Farmhouse to Courthouse: The Oklahoma Guide for Law Enforcement & Prosecutors Responding to Farmed Animal Cruelty Cases” presented by Kathleen Wood, Animal Legal Defense Fund
● “Virtue Ethics and Animals” presented by Nancy Snow, Philosopher and Director, Institute for the Study of Human Flourishing at the University of Oklahoma
● “Why Understanding How Elephants Think Matters for Their Conservation, presented by Joshua Plotnik, Conservation Behavior Researcher, Hunter College at the City University of New York
● “Our Country of Animals” presented by Wayne Pacelle, disgraced former CEO of Humane Society of the United States, President of The Center for a Humane Economy, Founder of Animal Wellness
Action, Founder of Humane Society Legislative Fund and CEO of Animal Wellness Foundation

It is very clear from the topics presented, the speakers presenting them, and even the food served, that Kirkpatrick Foundation’s The ANIMAL Conference was nothing more than animal extremism masquerading as animal welfare. This conference was not about animal welfare; it was about veganism and attacking animal agriculture.

Protect The Harvest will continue to research and point out groups who will do whatever they can to end animal agriculture and animal use as we know it.

Prev Article
Maine Legislators are Leading the Charge on the Right to Food
Next Article
Have Your Representatives Been Influenced by Animal Extremist Groups?