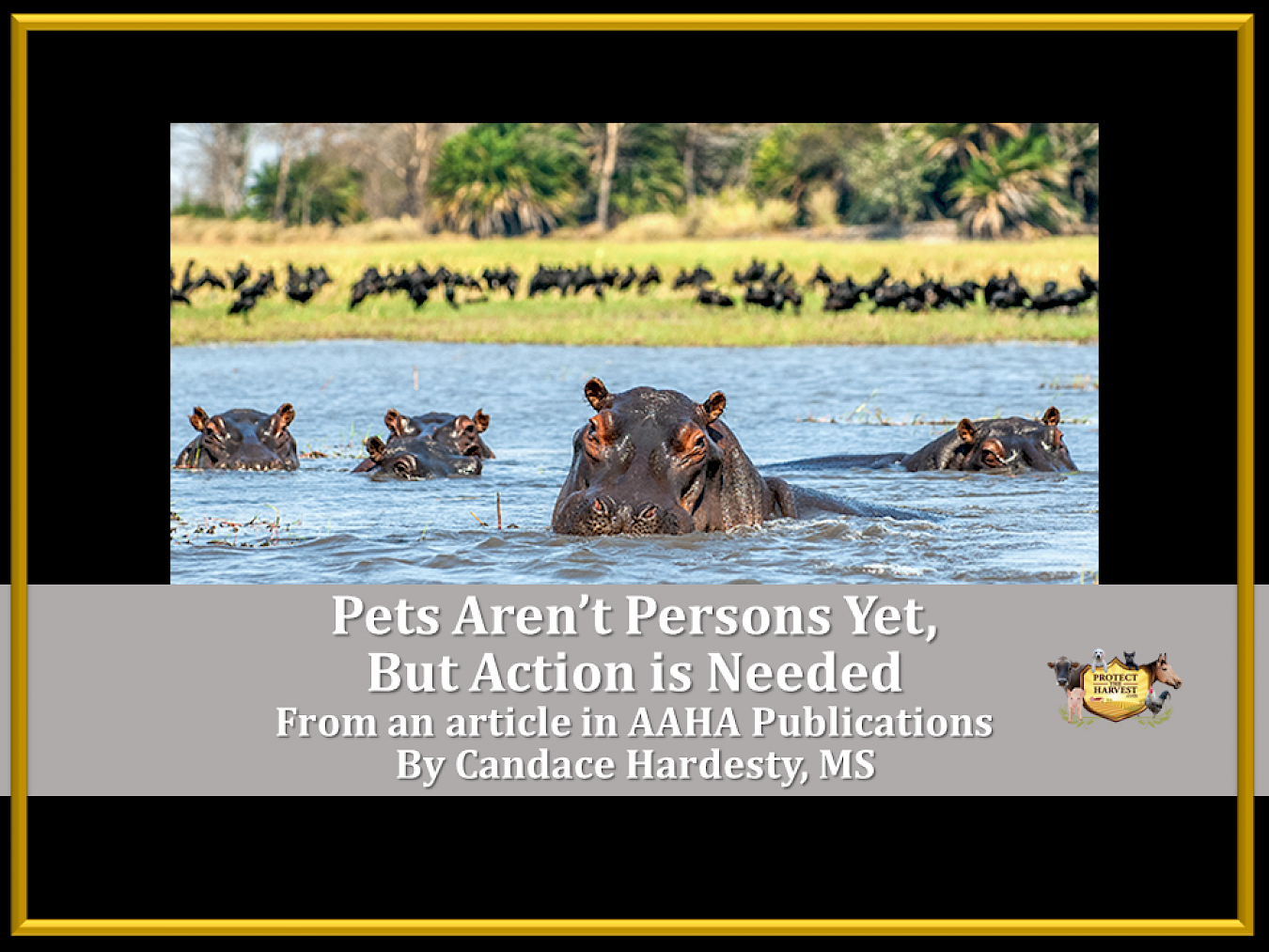 AAHA WEIGHS IN ON LEGAL PERSONHOOD

The American Animal Hospital Association (AAHA) is a nonprofit organization for companion animal hospitals and is the only accrediting body for small animal hospitals. The organization develops standards for veterinary business practices, publications and educational programs. Any hospital can join as an AAHA member, but the must pass a rigorous evaluation to receive AAHA accreditation which include the areas of diagnostic imaging, laboratory, pain management, pharmacy, safety, surgery, client service and multiple other areas. Because AAHA standards are so thorough and rigorous, some states are replacing state inspections with AAHA accreditation.

These are one of their member’s thoughts regarding “legal personhood” for animals and how it will negatively impact veterinarians and pet owners.

Pets Aren’t Persons Yet, But Action is Needed

October 15, 2021, was a big day for hippos. That day, you might remember (who could forget?), the Animal Legal Defense Fund (ALDF) announced an Ohio judge ruled that the late Pablo Escobar’s ‘cocaine hippos’ are ‘interested persons’ in a lawsuit taking place in Colombia. Across the spectrum of those concerned about animal rights, eyebrows raised in hope or skepticism.

The ALDF’s headline stated, “Animals Recognized as Legal Persons for the First Time in US Court,” despite the fact that the Court made no such ruling. Stephen Wise, president of the Nonhuman Rights Project, considered the claim overblown. And lawyers have dismissed the court’s decision as far more limited and technical, hurried, and even misguided.

Now that the kerfuffle has died down, what was it all about, really, and what does it say about the future of animal welfare and rights in veterinary practices? For the answer, look to a movement which has taken hold in the last two decades.

“What we are seeing is scope creep, wherein attempts to characterize animals as sentient can be used to argue that animals have the same rights as ‘persons,’” according to attorney Nancy Halpern, DVM, former president of the New Jersey Veterinary Medical Association and chairman of the animal law practice for Fox Rothschild, LLP. These changes are, in the fact, the result of definitive efforts by several animal rights organizations to change the status of animals from property (no matter how extraordinary our relationship is with our pets) to persons, who have standing to pursue their own legal interests, she adds.

United States law recognizes both natural persons (people) and juridical or nonhuman “persons” like corporations. The latter have rights ranging from making political contributions to filing lawsuits.
“The perception of companion animals as sentient beings has been universally appealing, but when used as a legal argument by animal activists to then label animals victims of cruelty or domestic violence and therefore persons with standing to sue their assailant in court, this changes the nature of the relationship between animals and people,” Halpern says. And notably, it raises two urgent issues for veterinarians.

First, having legal standing as a person could ultimately allow animals—including farm animals, animals used in biomedical research, and even companion animals—to sue their owners, Halpern says. It may also allow other interested parties to bring suit on behalf of the animal.

“The key questions is, who may bring actions against the veterinarian?” Halpern asks. “If I own a dog, and she has cancer and the prognosis is four to six months, but I can extend her life for three months by using expensive and painful measures, I may decide I don’t want to do it, because I do not think it is in the best interest of my dog. But if my neighbor disagrees, then what?

“That’s where the standing issue [personhood] really becomes important,” she explains. “If an animal had legal standing as a person, I could see lawsuits filed on its behalf by someone other than the owner.”

A person must have some interest in the animal in order to file a malpractice suit, but the perception of who has an interest may become broader, Halpern adds.

“Animal rights groups have been effective in arguing they have associational standing in certain cases. As a group, they have effectively argued that ‘We’re interested in the wellbeing in this type of animal, this is a mission of our organizations, and therefore our members have a legitimate concern about particular animals, which affords standing,” Halpern explains.

And that brings us to the second urgent issue for veterinarians, Halpern says. Considering pets sentient, which may lead to granting them legal standing as persons, would likely result in awards of noneconomic damages in those states in which such awards are not statutorily available.

In turn, that could increase the cost of care as veterinarians practice defensive medicine and pay higher malpractice insurance premiums, just as physicians do. “That could create a situation where only people with means will be able to afford to have pets,” Halpern says. “Is that really beneficial to society when we know of the health benefits of the companion animal bond, for animals and people?

“While veterinarians can and do utilize medical techniques and treatments available for humans, do we really want to adopt the same path physicians must use for compensation of their services?” Halpern asks. “I think that is a great model not to follow.”

Sentience. Personhood. Malpractice. Damages. What should veterinarians make of this tangled mess?
Whether a hippo or an orangutan or an elephant is a person may seem irrelevant, but it’s not, Halpern says.

“If these issues affect one type of animal, they can affect all animals,” she points out.

To counter the trends, “Stay on top of issues which may affect companion animal practice,” Halpern advises. “Get involved in your state VMA and specifically look at proposed legislation.”

Even more important is building long-term relationships with your local and state officials. That could mean annual meet-and-greets, providing comments on proposed laws, or inviting legislators to VMA briefings.

“It’s often too late to take action after bills have been introduced,” she advises. “Veterinarians need to develop and continue relationships with their local council persons, county officials, and state legislators.”

“Unfortunately, animal rights groups are often looked to as the experts on animal welfare,” Halpern says. “That’s a shame. It should be veterinarians. We can still turn it around. It’s about developing relationships.”

Dr. Nancy Halpern, DVM, JD is a partner, registered patent attorney, founder and chair of the Animal Law Practice Group at Fox Rothschild LLP, and former chair of the Animal Law Practice Committee of the New Jersey State Bar Association. She is also an adjunct professor at Seton Hall Law where she teaches Animal Law. Previously working as a licensed veterinarian in New Jersey, she has served as director of the Division of Animal Health for the New Jersey Department of Agriculture and New Jersey's state veterinarian and served on the State Board of Veterinary Medicine Examiners (SBVME) for nearly a decade. In these posts, she was responsible for the state’s emergency response regarding animal care concerns in the event of natural or man-made disasters; supervision of the sole animal health diagnostic laboratory in New Jersey; and implementation of regulatory and statutory provisions governing animal care, well-being, and safety, as well as animal disease surveillance and control. Dr. Halpern is also a member of the Protect The Harvest Advisory Committee and was quoted extensively in this article.