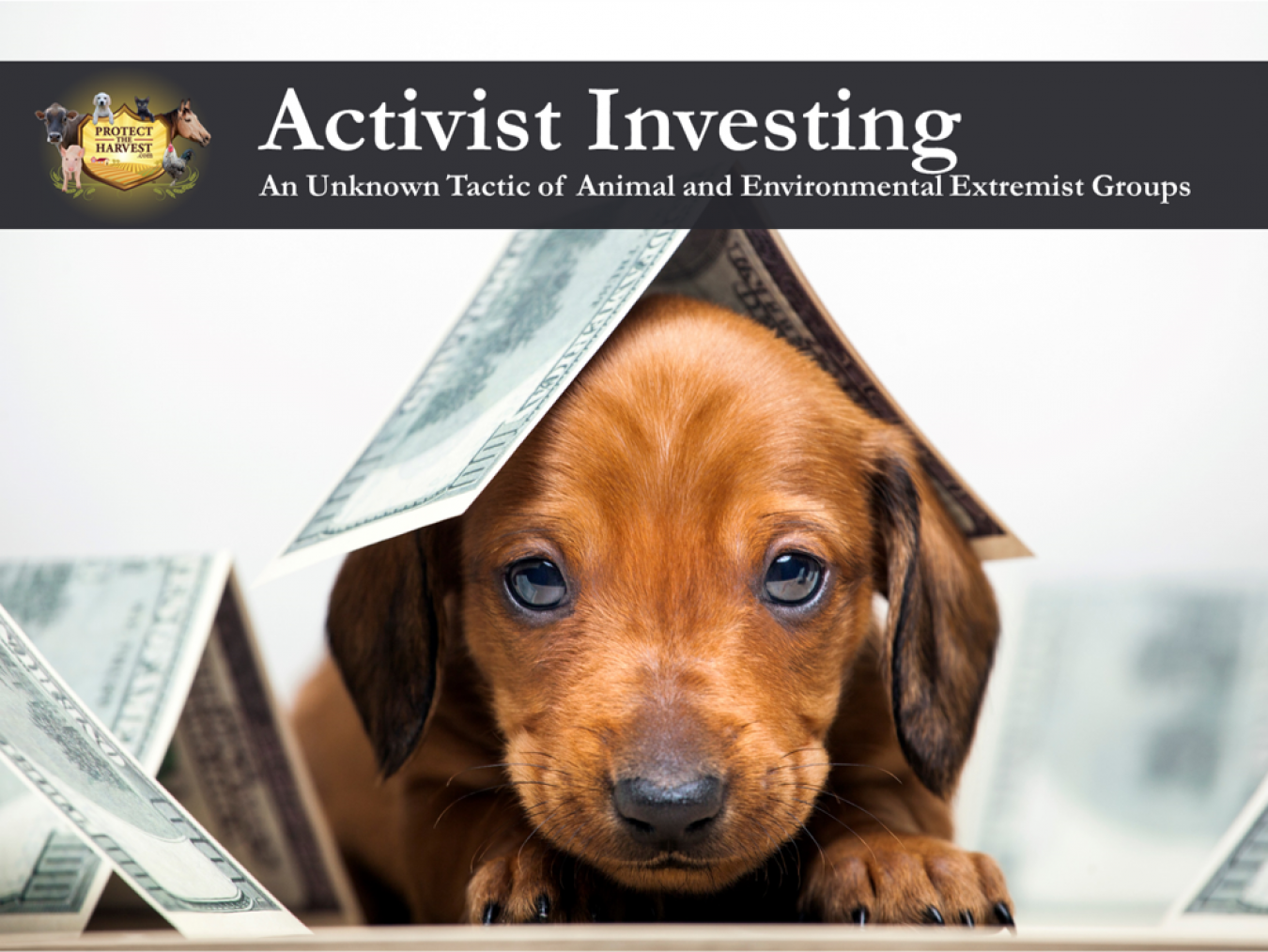 ACTIVIST INVESTING – AN UNKNOWN TACTIC OF ANIMAL AND ENVIRONMENTAL EXTREMISTS

One of the lesser-known activities of extremist groups and activists is to use investment strategies to promote their ideologies. Many notable extremists in both the environmental and animal ideological spheres are getting heavily involved with investments and mutual funds by offering financial aid to extremist-related companies or by using shareholders voting power to push their agenda.

There are several large hedge and private equity funds that focus exclusively on "environmental" and "humane" investments – and they seem to be on the rise.

Extremist groups fueled by thousands of donor dollars, such as People for the Ethical Treatment of Animals (PETA), the American Society for the Prevention of Cruelty to Animals (ASPCA), and the Humane Society of the United States (HSUS), have more financial power than meets the eye. Part of the real danger of “activist investing” is that this can be done discretely and quietly without the general public knowing about it.

A major vegan-based investment group to be aware of is called Farm Animal Investment Risk and Return (FAIRR). FAIRR was established by Jeremy Coller, an animal extremist and billionaire from Britain, who happens to be one of Europe’s most famed alternative investors.

With a net worth of £320 million, Coller used his foundation to advance the animal extremist movement using his expertise in the financial world. FAIRR is a collaborative investor network and is almost entirely focused on harming animal agriculture. On their website they state their network “raises awareness of the environmental, social, and governance (ESG) risks and opportunities brought about by intensive livestock production.”

FAIRR – Targets Animal Agriculture Via Its Own Carbon Footprint Analysis

A big way FAIRR targets animal agriculture and influences investors is by promoting the impact of livestock on climate change. The group has developed its own tool to analyze 40 of the largest animal protein companies in the world according to a “warming scenario.” Additionally, FAIRR does company-level analyses for protein producers and distributors. Part of what makes FAIRR concerning is its sleek design and climate-concern serves as a mask for its underlying extremist ideology.

“As a particularly carbon-exposed sector,” says FAIRR’s website, “the protein industry is a top candidate for substantial devaluation and investors failing to account for these risks will misallocate capital and investment.”
Using A Tunnel-Vision Approach to Suit Ideology
While FAIRR may attempt to account for the environmental footprint on these levels, some considerations need to be made. They do not fully account for nature of meat production, the complicated lifecycle of animals, and the many byproducts that are produced. They use a tunnel-vision approach that does not represent the true impact of protein production – and the many ways it benefits the environment.

Livestock consumes byproducts from other industries and the result is reduced landfill waste, which accounts for nearly 20% of all greenhouse gas emissions according to the Environmental Protection Agency. Beef cattle also provide 19% more human-edible protein than they consume in their lifetimes – not including the many byproducts they are also used for.

In 2019, Beyond Investing released the first vegan-centric Exchange Trade Fund – the US Vegan Climate Index on the New York Stock Exchange. Beyond Investing, run by vegan investment professionals, describe the index as “a passive, rules- based index of U.S. mainly large cap stocks, screened according to vegan and climate- conscious principles.”

“In the past year, assets in VEGN have exceeded $25 million. Beyond Investing uses this influence and power to encourage companies to shape up for the betterment of the world,” writes Sarah Kings for the vegan publication The Beet in a September 2020 article. “Currently, they are focusing on Apple, Verizon, Ford, GM, and Starbucks. Of these major institutions, Beyond Investing is asking to end the manufacture and sale of leather and to continue the transition to sustainable plant-based foods.”

According to Market Watch, this ticker has nearly $45 million in total net assets to date with 1.25 million shares outstanding.

FAIRR is a relatively unknown entity using its funds push its ideology. However, on the other side of the coin, there are many well-known extremist groups that are also getting more active in the investment world. PETA’s own website says one of their lesser-known activities is that they buy stock in companies they deem are “cruel to animals.”

“As partial owners of a publicly traded company, shareholders are entitled to bring proposals, or resolutions, to a vote as part of a company’s annual meeting process,” reads their article. “As a shareholder, PETA can share information on animal issues and bring resolutions to a vote to effect change.” One example happened while Asia was struggling in the midst of the pork crisis due to African Swine Fever. PETA was on the scene encouraging the government to use the situation to invest in plant-based proteins instead.

Additionally, PETA encourages its own membership to practice “cruelty-free investing” by using their Caring Consumer Database to lookup individual companies and examining their own mutual funds.

HSUS has also been in the investment spotlight. The group came under fire when it was uncovered that 20% of its budget had been sent to offshore hedge funds in the Caribbean – about $26 million worth – compared to only 1% spent on donating to actual shelters. They claim they do this to raise more funds to help animals, but a sufficient explanation for these investments has never been made. Click HERE for additional information.

The Rise of Vegan Investment Companies

In 2008, Humane Investing, LLC was founded by Brenda Morris, a “vegan financial planner.” Since starting her business, she has given multiple presentations on the principles and practice of “humane investing” for extremist groups such as the Sierra Club, PETA, Our Hen House (vegan podcast), the FARM Animal Rights Conference, and many others. On Vegan Mainstream, a site that offers vegan business courses, Morris offers a free course on vegan investing.

Besides her own outspoken support, Morris says she helps enhance mutual funds that are “sustainable” and “ethical” while they “encourage the portfolio managers of these funds to consider animal rights and animal welfare in their investment process.”

Another notable company is Rocky Mountain Humane Investing which was established in 1995. They tout themselves as being the first exclusively vegan, humane and environmentally aware investment adviser in the U.S. Founder Brad Pappas has made some media appearances to support the growth and vitality of vegan and “green “based portfolios including Top Trader Radio and a Bloomberg opinion article on the rise of vegan meat alternatives – due in part to massive support from investors hopping on the trend

Karner Blue Capital, promoted by PETA, is another investment group who “seeks to leverage its proprietary research methodology to provide its clients market-based returns while influencing the behavior of stakeholders for the protection of biodiversity, environmental conservation and the welfare of animals.”

Interestingly, Karner Blue is a signatory of the United Nation’s Principles for Responsible Investment and the Finance for Biodiversity Pledge. FAIRR may also have ties to the UN with its logo appearing in some of FAIRR’s media. This is not surprising as their principles to control and even eliminate meat consumption are aligned with the UN, who has a track record of misrepresenting the effects of animal agriculture on climate change. Click HERE to read a brief article about how animal agriculture was misrepresented by the U.N.'s report they eventually retracted. Animal agriculture only contributes 4%.

Despite the implications of fake meat, even environmentalists have expressed concerns over the widespread belief that they are better for the environment. Click HERE to read article in Fortune

On the national level, an all-vegan society would have consequences not commonly known. This would include the increase of synthetic fertilizer and increased soil erosion – all while having fewer and insufficient nutrients to feed the population.

From an investor’s standpoint, the allure of a more “green world” can make buying into trendy alternative meat companies quite tempting. A contributor for Seeking Alpha discussed this in a 2020 article regarding the wildly popular company Beyond Meat:

“One of the reasons certain investors love Beyond Meat (BYND) is a belief that it is an eco-friendly company that embraces all that is green. But a closer look reveals a concerning reality that is quite different from this widely held belief. Beyond's supply chain, logistics, and agricultural requirements are, in fact, extremely unfriendly to the environment and generate a substantial carbon footprint and other negative externalities. ESG Investors, in particular, should be cognizant of the reality behind the green facade of Beyond Meat.”

Likewise, the health benefits are misleading. In addition to being highly processed, plant-based meats also have lots of filler ingredients and additives making them their health benefits misleading to many people.

Why We Should All Be Concerned

One of the biggest concerns about anti-animal agriculture or anti-meat investments is that it gives power to extremist groups and companies aligned with them. As PETA has openly admitted, investor influence can be one way to enforce extremist ideologies with “activist investing.” Unfortunately, this mode of action doesn’t seem to be going away anytime soon.

As extremists become more involved in the financial world, they use their involvement to defame or negate private companies. The research team at Cruelty Free Investing has gone through and examined all the publicly traded companies in the U.S. to identify them as “exploitive” to animals or not. They even have a list of “The Ten Worst Companies For Animals,” seven of which are leading national meat packers.
This type of action highlights part of why individuals should be well-informed before they donate to any animal-related organization. Not only are those donated dollars eligible for the inner workings of the organization, but they are being invested as the beneficiaries see fit and used to further leverage their ideological extremist agendas.

These groups are using donor funds from goodhearted people, not to help animals in shelters, but to move forward their ideology and agenda of eliminating animals in human care. Research before you donate. Protect The Harvest will continue to inform the public on these issues and will continue to fight back against the powers working to end our way of life.