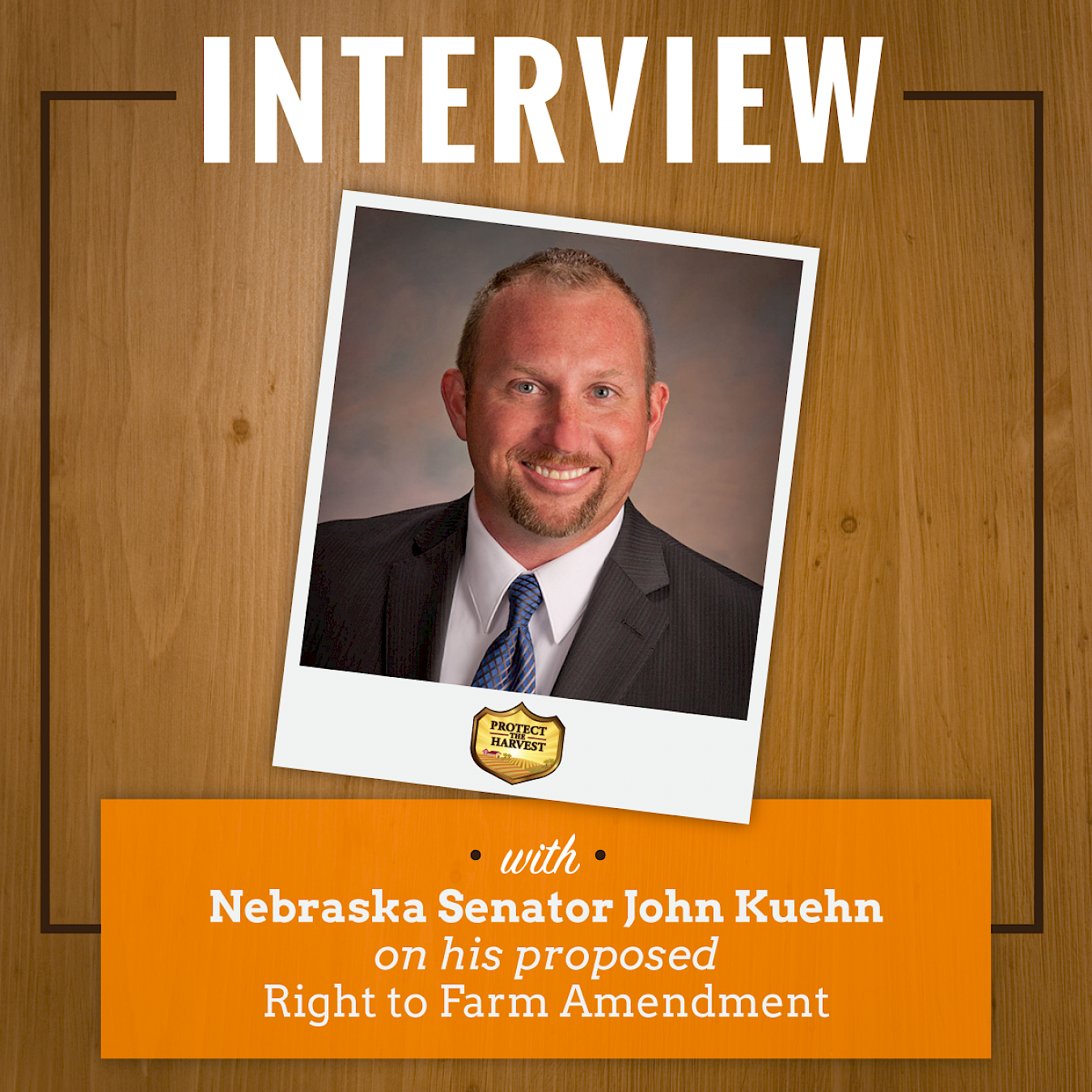 In early January, a proposed constitutional amendment (LR378CA) to forever guarantee the right to farm and ranch was introduced in the Nebraska state legislature. Following in North Dakota and Missouri's footsteps (and Oklahoma's, if the state approves its own Right to Farm Amendment - State Question 777 - in November), Nebraskans may one day have the opportunity protect this vital industry for future generations. State Senator John Kuehn, who introduced the resolution, has a unique background. He is an associate professor of biology at Hastings College in Hastings, NE, a livestock producer, and a member of the Nebraska Veterinary Medical Association. Therefore, Senator Kuehn was specifically qualified as an expert on the state's agricultural issues and this type of legislation. We recently interviewed Senator Kuehn to learn more about his motivation for protecting agriculture in Nebraska. What motivated you to draft LR378CA - the constitutional amendment to guarantee the right to engage in certain farming and ranching practices? As an ag producer and state senator representing a rural district, protecting Nebraska’s #1 industry is my top priority. The use of innovative, approved technology has enabled family farmers and ranchers to meet an increasing global demand for food and fiber in a sustainable manner. As fewer and fewer consumers and voters have a direct connection to agriculture and the methods used to produce food for our nation, misconceptions about modern agriculture created by activist groups from outside of Nebraska take root and perpetuate. Guaranteeing the rights of farmers and ranchers and their families to use modern agriculture practices without fear of activist legislation and regulation is essential to protecting the future of Nebraska. Do you believe that Right to Farm amendments are necessary to prevent states from being attacked by out-of-state special interest groups? I do. In the social media age where misinformation can quickly go viral without regard to fact, out-of-state activists can quickly undermine Nebraska’s farm families. Under the guise of other objectives, activist groups can also introduce increasingly restrictive legislation and regulation that restricts the rights of family farms and livestock producers to use accepted, safe techniques and methods on their farms and ranches. Family farmers do not have the resources to defend legal challenges or relocate their farms in response to assault from deep-pocketed interest groups. Attacks by these outside groups are crippling to Nebraska’s rural communities. Without constitutional protection, the influence of outside money and activist agendas is a continual threat to ag producers. Describe the role of agriculture in Nebraska's overall success as a state. It is impossible to overstate the importance of agriculture to Nebraska. The number one industry in the state of Nebraska, agriculture represents 1 of 4 Nebraska jobs and $23 billion of economic impact. Every facet of our state economy from manufacturing through tourism ultimately leads back to the success of agriculture. Supported by a strong and vibrant agriculture sector, Nebraska has enjoyed one of the lowest unemployment rates in the country and strength fiscally throughout the recent economic recession. Does having a unicameral legislature make it easier or harder to get a bill like this to the voters? The unicameral system is unique among state legislatures, not only in the one house aspect but also because we are nonpartisan. The people of Nebraska are our “second house”, so the cultural presumption favors allowing Nebraska voters direct access and participation in our legislative process. You are a livestock producer, veterinarian, and biology professor apart from your work in the Nebraska legislature. What does agriculture mean to you personally? I am the fourth generation John Kuehn to be engaged in ag production in the rural community of Heartwell, Nebraska. The success of my career and my family is inextricably tied to the success of Nebraska agriculture. My passion for the rural community in which I live and my desire to support the long term sustainability of our ag economy are the factors that motivated me to run for the Nebraska Legislature. Each of the roles I fill professionally raising livestock, promoting the health and conservation of Nebraska’s livestock resources as a veterinarian, and helping young adults develop a scientific, evidence-based approach to their higher education is woven into the fabric of my rural community. Attacks on agriculture based on fear and misinformation undermine the values I hold most sacred: independence, sustainability, and intellectual honesty. If passed, what would a Right to Farm amendment mean for Nebraska's future? The Right to Farm amendment provides certainty for Nebraska's family farmers and ranchers as they manage their operations now and for generations into the future. Agriculture is a business of cycles, both in the cycles of production that occur over seasons and the cycles of generations that manage Nebraska’s agricultural resources. In a business well accustomed to managing risk, the threat posed by regulatory uncertainty and outside activist agendas deters long-term investment in our rural communities. Codifying into the Nebraska Constitution the right to farm and ranch clearly protects the current and future status of agriculture in Nebraska and stabilizes our state economy.

Prev Article
They're Not All Bad: When Government Fights for Hunter's Rights
Next Article
Why People Fear Agriculture: The Cycle of Misinformation