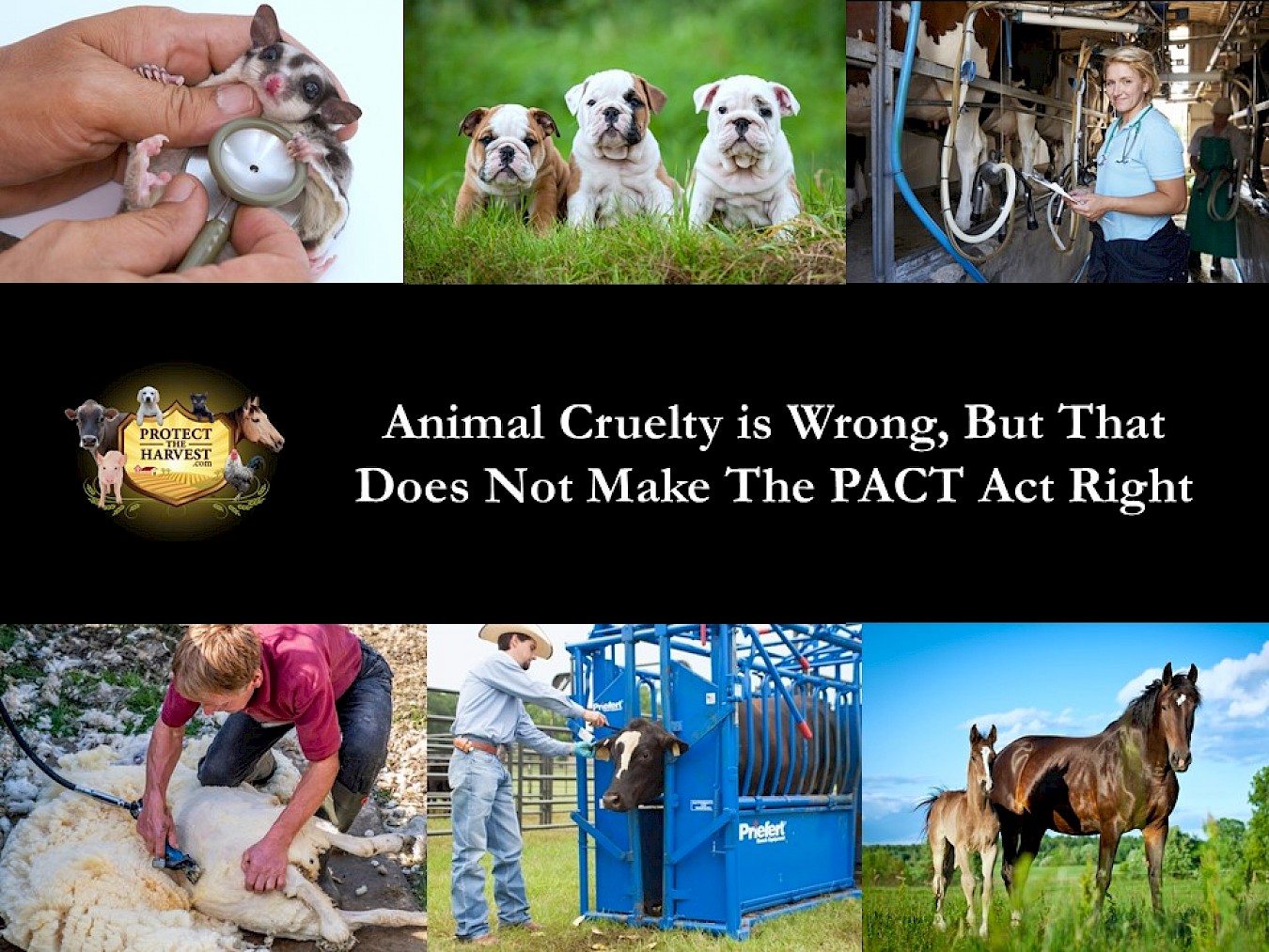 ANIMAL CRUELTY IS WRONG, BUT THAT DOES NOT MAKE THE PACT ACT RIGHT

WHY ANIMAL CRUELTY LEGISLATION IS CONCERNING

We often share information about legislation that has implications for animal owners. The facts we share can surprise our followers as they know our organization is centered around animal welfare and they don’t always understand why we don’t show some of that legislation in a more positive light.

Protect The Harvest firmly and wholeheartedly believes that all animals deserve to be treated using best welfare practices. This belief is part of why we work so hard to defend animal owners’ rights to own and use animals.

Anyone that cares about and for animals feels animal cruelty is wrong, and it deserves to be punished under existing laws. It is important to remember, there are already felony animal cruelty laws in all 50 states.

Many times, concerns about certain legislation will arise when the curtain is pulled back and the supporting groups and language used is analyzed.

H.R. 724, a bill that passed the House of Representatives on October 22, 2019, reads like so many other animal rights pushed bills. Vague language allows for a wide spectrum of interpretation. We see this situation frequently in proposed legislation concerning animals. So, can we surmise it is done on purpose?

On the surface, this bill looks good, it looks like it prevents animal cruelty. In section (d) Exceptions it looks to exempt veterinarians, animal husbandry, slaughter for food, hunting, and scientific research and testing. This is why it was such an easy sell to the majority of the lawmakers who signed it.

Cruelty is wrong so what’s the problem?

When considering the ideology of animal rights and the steps they have taken for years to sway public opinion and legislation, the use of certain words can raise a red flag.

Use of words like “customary and normal” are very subjective. While there is a wide range of “common practices” in veterinary medicine and animal agriculture, not everyone agrees on all those practices being customary and normal. Practices can differ for many different reasons including climate, operating expense, education, and experience, that does not make any of those practices cruel. There are often many ways to accomplish a task. Depending on what a person’s beliefs and expertise might be, their idea of what is customary and normal may change, especially if they are animal rights leaning.

“(1) the term ‘animal crushing’ means actual conduct in which one or more living non-human mammals, birds, reptiles, or amphibians is purposely crushed, burned, drowned, suffocated, impaled, or otherwise subjected to serious bodily injury (as defined in section 1365 and including conduct that, if committed against a person and in the special maritime and territorial jurisdiction of the United States, would violate section 2241 or 2242)”

Reading the definition brings several concerns to mind. In someone’s uneducated “customary and normal” interpretation many everyday actions could be a felony under this law.

The following examples are all humane and good animal welfare practices used by veterinarians, farmers and ranchers, and pet owners across this country every day. They are standard, necessary practices that could be easily misunderstood by someone uneducated in animal handling and husbandry. Making these actions easy targets for animal rights groups to use to spread their cruelty message to the unknowing public.

Even more concerning than the vague definition of the term ‘animal crushing’ are the three additional sections used in that definition. These three sections were written specifically for people and should not transfer directly to animals, the implications are huge.

In section 1365 the definition of bodily injury includes “(D) impairment of the function of a bodily member, organ, or mental faculty”. The mention of this opens a door very wide for interpretation of what an animal’s mental status may be. It is a common animal rights goal to liken animals to humans in this way. Who’s to say the standard animal care practice of castration might not end up as a felony, depending on the opinion and beliefs of those tasked with enforcing this proposed law. It obviously physically affects a “bodily member or organ,” and it also changes the behavior of the animal.

Sections 2241 and 2242 define sexual abuse with regards to people. The cause for concern here is the increased frequency of animal rights groups claiming that any purposeful breeding and artificial insemination of animals is akin to rape. They label breeding stock as sex slaves, attempting to convey these animals have human thoughts and feelings. This is done specifically to play on the uneducated public’s emotions.

Under this law, would a rancher or dairyman or horse breeder end up a felon? Who would be in charge of deciding what is “customary and normal”?

Artificial insemination has been key to the massive increase in efficiency in livestock production. It allows breeders access to the best genetics. Producers are now able to generate greater yields and higher quality products using fewer resources than in past years. This is vital to the sustainability of animal agriculture and the ability to provide for an ever-expanding human population.

The passing of this bill seems to set a precedence that will eventually criminalize animal breeding and ownership.

All 50 states have animal cruelty laws in place, meaning there are already set standards held up at the state level. This law, because it is Federal, has the potential to damage many yet unmentioned industries. For example, would transportation of these “abused” animals across state lines make the list of potential felonies? That may interest livestock transporters.

Why Do You Need To Educate Your Lawmakers?

Laws like this are aiming to chip away at animal ownership on a federal level. If you are an animal owner, you have cause to be concerned and it is time to look at the big picture of what animal rights groups are working to accomplish.

Animal rights groups take advantage of the fact that most lawmakers are often not experts in animal care or welfare. Usually, lawmakers listen to the loudest voices or the organization that recognizes them with awards or contributions. Organizations like The Humane Society of the United States work hard to foster relationships with lawmakers using these tactics. The PACT Act is just another example of “wolves in sheep’s clothing”.

In the media, articles quote muckity mucks from the HSUS and the Humane Society Legislative Fund patting the backs of their “award winners” (who also happen to be the authors of H.R. 724) using words like “depraved”, “gruesome”, and “inhumane” to paint a picture in the uninformed minds.

Who will decide what is inhumane or not? What are their credentials and experience? Animal rights groups work very hard every day to anthropomorphize animals, changing the narrative as to what is generally considered cruel or abuse. It is clear many stakeholders, including veterinarians and livestock experts, were left out of the conversation about this proposed federal law.

Animal Rights Has Nothing to Do With Animal Welfare

Let us not forget, that time and time again, animal rights groups have stated that in their opinion, simple animal ownership is the same as slavery and they consider that right an act of cruelty. Their opinion of “customary and normal” may differ drastically from your opinion. Animal rights has nothing to do with animal welfare and everything to do with the end of animals in human care.

Need a recent example? On the same day H.R. 724 passed the House, Newsweek.com published an article reporting on a letter from PETA asking Dictionary.com to change its definition of the word “animal”. They claim the current definition creates a distinction between humans and other animals that they believe to be “speciesist”.

Carefully consider who is educating your lawmakers. Keep those facts in mind when reading about new legislation that touts itself as preventing cruelty.

If you would like to voice your opinion to lawmakers and effect change, please review S. 479 using the link below and contact your U.S. Senator.