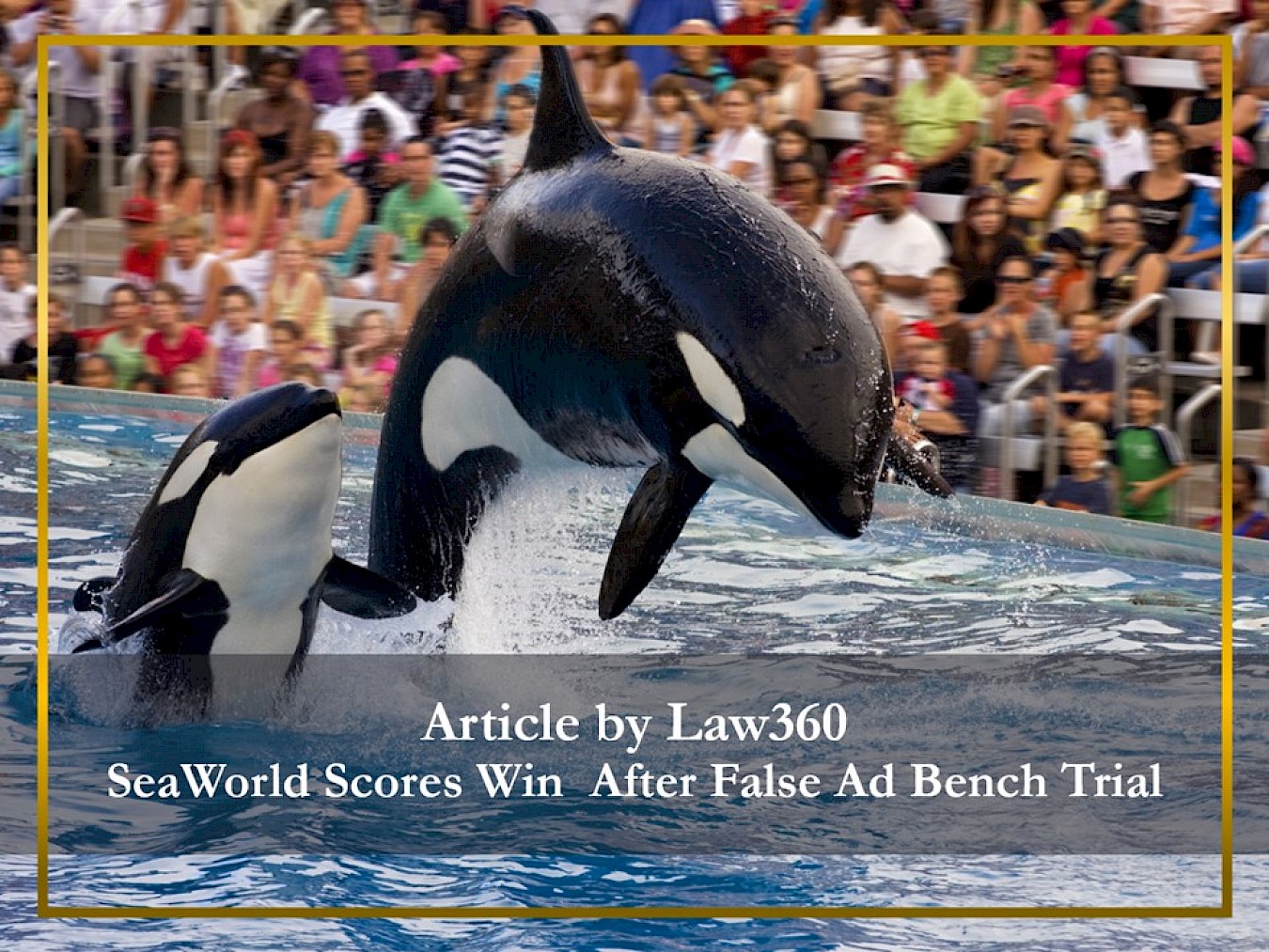 -- A California federal judge has ruled that two consumers don't have standing to bring false advertising claims against SeaWorld over its communications about the welfare of its captive orcas, saying the pair's testimony and evidence were not reliable.

U.S. District Judge Jeffrey S. White said in Tuesday's post-bench trial opinion that he did not find credible the testimony of plaintiffs Kelly Nelson and Juliette Morizur that they intend to return to the theme park or purchase its merchandise. Therefore, they failed to meet their burden to show they have Article III standing to seek injunctive relief on their claims, he said.

"The court concludes they have not met their burden to prove they are faced with a real and immediate threat of an ongoing or repeated injury," Judge White said.

The two women alleged they would not have spent money at the San Diego park if they had known about its advertising falsehoods. Nelson said she saw a SeaWorld ad responding to the documentary "Blackfish," which details SeaWorld's alleged mistreatment of orcas, and the ad persuaded her and three family members to spend $92 per ticket to go to the park.

And Morizur said she asked an orca trainer at the park about the animals' dorsal fins and calf separations. The trainer reassured her, and based on those reassurances, she spent $25 for a plush orca at a park gift shop.

The pair sought restitution and asked the court to issue an order requiring SeaWorld to inform consumers on its website that captivity in general negatively impacts orca health, among other things.

The court said Morizur's evidence that she purchased the orca plush was not credible, adding that her testimony that her dog destroyed the plush was inconsistent.

"Ms. Morizur's lack of candor at trial, including admitted exaggerations and embellishments, as well as the fact that neither her parents nor her fiancé could corroborate the fact that the Shamu plush was destroyed lead the Court to discredit Ms. Morizur's variation of 'the dog ate my homework excuse' as an explanation for why she did not produce the Shamu plush," Judge White said.

Judge White added that Morizur's father testified that he thought her goal in bringing the case was "that killer whales will no longer be held in captivity anywhere," while her fiancee testified that she said she would never go back to SeaWorld as long as the orcas are in captivity. The court said their testimony about Morizur's views of the park was more credible than her testimony.

"The court does not doubt that Ms. Morizur has a genuine love of orcas and that Ms. Morizur is passionate about orca welfare," Judge White said. "However, it finds Ms. Morizur's statements criticizing SeaWorld are a more accurate reflection of her views, and it finds her change of heart at trial about SeaWorld to be litigation motivated."

The court said Nelson, on the other hand, failed to prove she saw the advertisements at issue on SeaWorld's website before her trip to the park, defeating her claim of statutory standing under California's Unfair Competition Law, California's False Advertising Law and California's Consumer Legal Remedies Act.

Judge White found that Nelson did not present credible evidence that she believed SeaWorld's statements about the lifespan and separation of orcas.

"Indeed, the evidence clearly shows that she did not give credence to either statement — before or after she made the 2015 trip to SeaWorld," Judge White said. "Where it is clear that the plaintiff did not actually believe the representation at issue, there can be no actual reliance on it."

SeaWorld said in April that the factual landscape of the pair's claims was not clear, adding that their evolving testimony and lack of explanation led the park to believe that the women made changes to their testimony at trial to try and salvage their case.

John Simpson of Duane Morris LLP, counsel for SeaWorld, said in a statement that he is pleased with the court's decision, adding that the plaintiffs had been recruited by an anti-SeaWorld activist organization and that one of them was a member of PETA.

"We are gratified that this matter has been concluded," Simpson said.

Counsel for the plaintiffs did not immediately respond to a request for comment Wednesday.

The case is Anderson et al. v. SeaWorld Parks and Entertainment, case number 4:15-cv-02172, in the U.S. District Court for the Northern District of California.

Click HERE to read the Findings of Fact and Cconclusions of Law on this case.