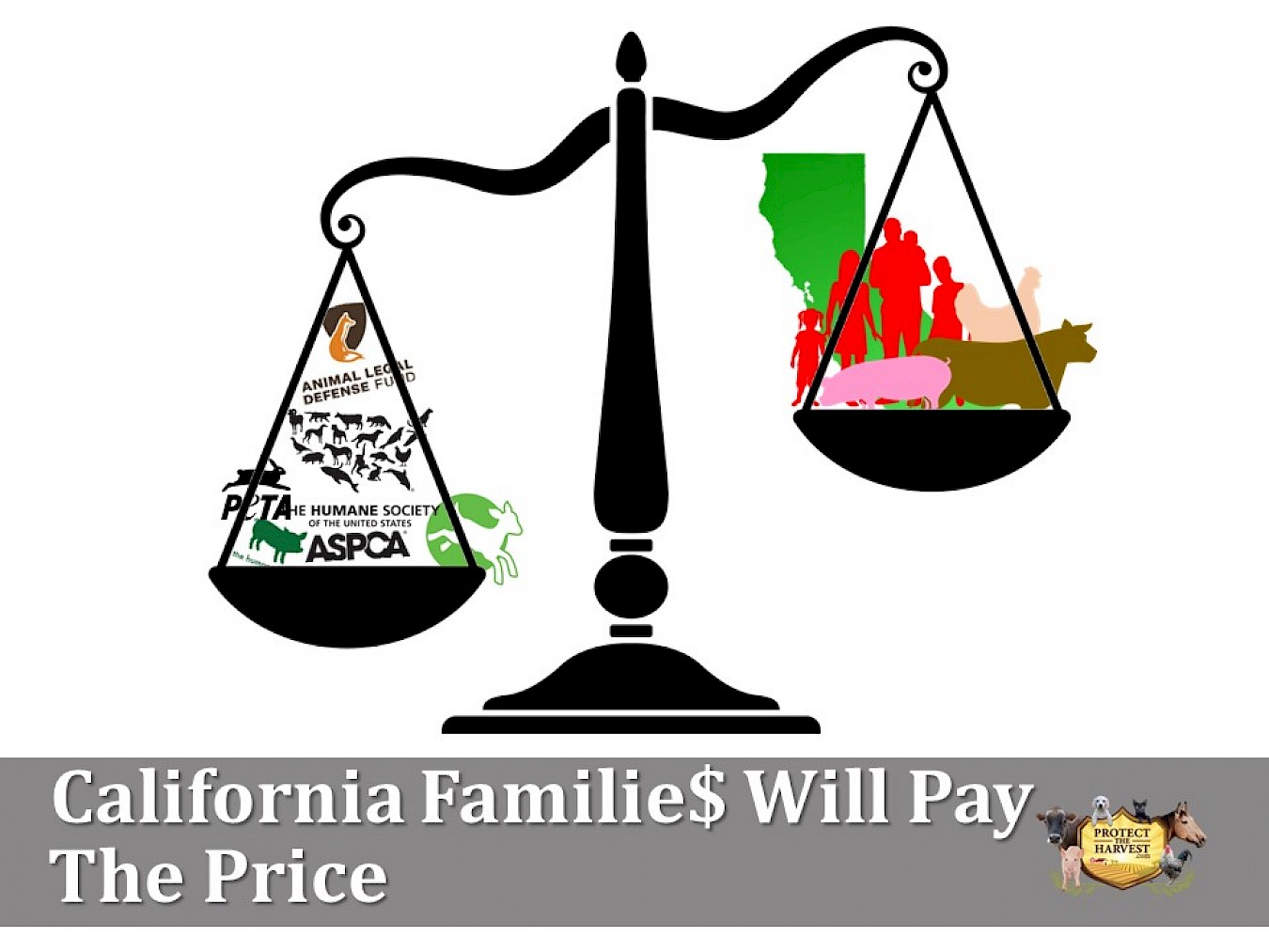 In November 2018, with over 60% of California voters in support, Prop 12 passed. It dealt agriculture a heavy blow. Prop 12 also known as The Farm Animal Confinement Initiative, is a thinly veiled attack and was spearheaded by the Humane Society of the United States (HSUS) and the American Society for the Prevention of Cruelty to Animals (ASPCA) as well as a number of other animal rights groups. It pushes for more regulations on producers by banning the sale of any veal, eggs, or pork that doesn’t meet the minimum space requirements as defined by the proposition. This new law goes even further. It prohibits producers outside of California from importing their eggs, veal, or pork into the state unless those out of state producers follow California’s new guidelines and subject their businesses to inspection by California regulators. As written, Proposition 12 impacts interstate commerce because it mandates how out of state producers must operate their businesses if they want to sell in the state of California.

The Commerce Clause
According to Encyclopedia Britannica, the “Commerce clause provision of the U.S. Constitution (Article 1, Section 8) authorizes Congress ‘to regulate commerce with foreign nations and among the several states and with Indian Tribes.’ The commerce clause has traditionally been interpreted both as a grant of positive authority to Congress and as an implied prohibition of state laws and regulations that interfere with or discriminate against interstate commerce (the so-called ‘dormant’ commerce clause). In its positive interpretation the clause serves as the legal foundation of much of the U.S. government’s regulatory power. “
In its simplest form, the Commerce Clause allows the federal government to regulate trade so that the free flow of trade or commerce between the states is not blocked by individual state laws.

North American Meat Institute (NAMI) Files Lawsuit
In October 2019, the North American Meat Institute (NAMI) filed a lawsuit challenging the constitutionality of California’s Proposition 12. The lawsuit states that the Initiative will hurt the nation’s food value chain by significantly increasing costs for producers and consumers. According to NAMI’s website, meatinstitute.org, “The lawsuit was filed in the US District Court for the Central District of California and asks the court to halt implementation of the law by granting a preliminary injunction because Prop. 12 violates the Commerce Clause and federal structure of the U.S. Constitution. The Constitution prohibits states from discriminating against interstate and foreign commerce, regulating commerce outside of their borders or imposing undue burdens on interstate and foreign commerce. Proposition 12 violates each of these limitations.”

A preliminary injunction is a court order made in the early stages of a lawsuit which forbids moving forward until a ruling or outcome occurs. Along with NAMI’s request for the preliminary injunction, there were numerous declarations to stop Proposition 12 from being put into effect. These declarations or statements described in detail the huge impact California’s Proposition 12 will have on animal agriculture in the 49 other states. Immediately, animal rights groups like HSUS, Animal Legal Defense Fund (ALDF), Animal Equality, The Humane League, Farm Sanctuary and Compassion in World Farming USA, filed to stop NAMI’s request for the preliminary injunction. To read more about these organizations click HERE

Judge with No Agricultural Background Sides with Animal Rights Organizations
The Hon. Christina A. Snyder handed NAMI, U.S. agriculture and the Constitution a major defeat in a hearing on November 18, 2019. Judge Snyder did not agree with NAMI’s argument that Proposition 12 was unconstitutional and violated the Commerce Clause. Instead, she sided with the Animal Rights groups’ arguments. Judge Snyder also ruled to allow Compassion Over Killing and a coalition of animal rights groups led by HSUS to intervene in NAMI’s lawsuit as defendants alongside the state of California.
It is important to note that Judge Snyder was born in Los Angeles, attended Pomona College, a private liberal arts school now known as the Claremont colleges. She attended Stanford Law School where she received her Juris Doctor and then worked in law firms specializing in entertainment law, high stakes litigation and antitrust law. She currently resides in Los Angeles and is a member of the Beverly Hills Bar Association. She does not appear to have any experience or background in animal agriculture, or livestock health and welfare.

California Families will Pay the Price
According to California’s own economic analysis, consumer prices are likely to increase. Producers will have to expand existing facilities or construct new animal housing to meet Prop 12’s nonstandard regulations. These added long term costs will likely pass to the consumer. While there are some producers in California, due to increased and overbearing regulations, the numbers of pork, dairy, egg and veal producers in the state has already drastically reduced in recent years. More animal protein products than ever are being imported to California from out of state. There is no doubt some out of state producers will choose not to import their food products to California due to the cost to meet Prop 12’s nonstandard requirements. With the lack of choices and reduced availability of these food items, supply and demand theory predicts that the cost of pork, veal, and eggs will increase exponentially. When protein sources become too expensive, low income families with growing children that are already having difficulty affording the high cost of living in California will be hit the hardest.

What’s Next
According to Sarah Little, Vice President of Communications at NAMI “We will review the ruling and consider our options, which include an appeal to the US Court of Appeals for the Ninth Circuit.”

Protect The Harvest will continue to follow this story and will keep our readers updated.