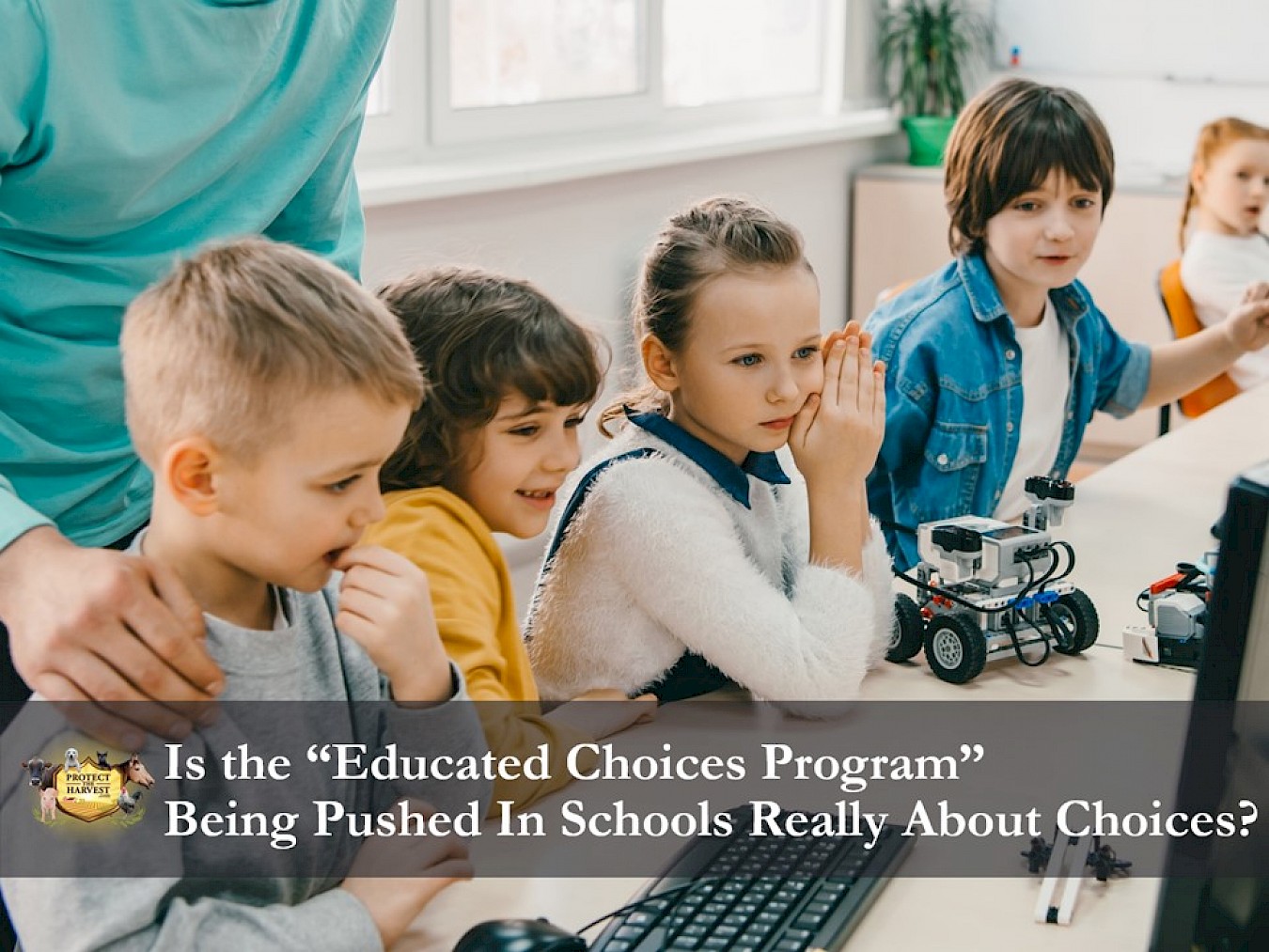 EDUCATED CHOICES PROGRAM - IS IT REALLY ABOUT CHOICE?

Is the Educated Choices Program really about choice?

The Educated Choices Program sounds pretty innocuous. At a glance it should seem quite harmless, even beneficial, to offer young students and communities some considerations about the significance of their food choices. However, this program, which meets the high school and middle academic standards for at least 44 states plus the District of Columbia and Canada, is less about showing the value of individual choices and more about promoting a radical animal extremist agenda.

What makes the Educated Choices Program different compared to other programs and groups promoting vegan ideology is the way it deliberately veils its animal extremist roots. Under the guise of health and consumer science education, highlighting first how foods impact personal health and the environment, this program offers total veganism as an answer to many common societal issues.

Interestingly, this program is very careful not to overplay its beliefs on veganism and animal rights in its marketing. While they do point out the ways animals are impacted by this lifestyle, this plays second fiddle to promises of better personal health and reduced environmental impact.

The website does not even use terms like “vegan,” “veganism” or even “vegetarian.” Instead, they make use of euphemisms such as “plant-based,” “ethical” and “compassionate” while repeatedly underlining how these relate to dietary choices. They also give high praise to cell-based meat as a reliable alternative that is “environmentally friendly” and “ethical” although this has not yet been proven.

A deeper look into this program gives a clear picture as to what values its team is actually promoting—and why.

The program’s website focuses on the educational aspect, saying they value healthier lifestyles and greater awareness for how food choices impact the environment. Animal rights of course is not mentioned by name, though a scroll through the Educated Choices Program’s Facebook page is a bit more telling. The feed is full of links to several articles mostly dedicated to modern agriculture, the vegan lifestyle and other vegan-related news. Note the vast majority of which are not directly linked to renowned radical animal rights groups. However, many of the carefully sourced articles do link back to groups with strong anti-animal industries affiliations including The Guardian, Veg News, and Vice.

Some of the sources tied to the website itself are directly questionable in and of themselves. One of these goes to an American Society for the Prevention of Cruelty to Animals (ASPCA) page titled: Animals on Factory Farms. This is a strategic move as most people don’t associate the ASPCA with animal rights extremism as compared to groups like PETA and the Humane Society of the United States. Nevertheless, they have repeatedly come under fire for misuse of funds and some questionable animal rights related campaigns according to the website, activistfacts.com.

The Educated Choices Program, in an attempt to give itself credibility in their introductory videos, uses accredited sources of information from the United States Department of Agriculture, World Health Organization, and the Center for Disease Control. Among them is the United Nation’s Food and Agriculture Organization (FAO). Despite its name, the FAO has a history of not being very friendly towards certain types of agricultural practices, including animal agriculture. For example, FAO was responsible for the paper Livestock’s Long Shadow, which has since been called out and redacted for its inaccuracies. Years later this paper continues to be one of the most widely quoted pieces of misinformation used by animal extremist circles.

Certain individuals on the FAO committee also have ties to animal rights groups. One of the most well-known examples is Miyun Park, a member of the FAO Editorial Board for farm animal welfare. Her past affiliations include being former Vice President for Farm Animal Welfare at the Humane Society of the United States and President of Compassion Over Killing, a radical vegan activist group. With their noted track record and affiliations with the animal rights world, the FAO is a favored source by many animal extremist groups.

When it comes to funding these extensive materials, the Educated Choices Program, a non-profit 501 (c) (3), seems to keep pretty tight lipped on their donors list. Yet with gross receipts at $791,084 in 2017, it is pretty evident they have connections to fund their program that currently spans the U.S., Canada, and Costa Rica.

On Giving Tuesday of 2020, they announced on Facebook that an anonymous donor would be matching any and all donations through the entire month of December. We can take a well-educated guess as to the ties these unnamed donors might have.

Let’s start with Lorena Mucke, the program’s Founder, President and Chief Executive Officer. Mucke’s work has been praised by several facets of the animal extremist community. She has a bio featured on Farm Sanctuary’s official high-profile website. Farm Sanctuary is a well-known animal extremist group that campaigns against animal agriculture. She has also appeared on iROAR: The Animal Rights Podcasting Network for an episode of the Our Hen House podcast to discuss her program.

Mucke has also composed some of her own articles for platforms within the animal rights community and these provide even more insight into her personal beliefs.

“This rising generation is pivotal in creating much-needed change,” she wrote for The Plant Based World. “They are the future leaders, decision-makers, and consumers, who become aware of and more literate about the impact of their food choices. This drives the demand for plant-based foods at an ever-increasing rate, helping societies urgently move away from the anachronistic system of animal agriculture to a healthier, more sustainable, and more compassionate way to produce food.”

A look down her program’s advisory board and their affiliations tells just as much. Several of them are members of the Physicians Committee for Responsible Medicine, an animal activist-affiliated group who promotes plant-based living. In spite of its name, less than four percent are actual physicians according to the Center for Consumer Freedom. The group has also been called out by accredited groups such as the American Medical Association. A quick look at their tax records show that the committee also files their activities under (913) Prevention of cruelty to animals. That should be your red flag to let you know they have an ulterior motive. Dr. Paul Waldau, the program’s Animal Ethics Advisor, is also well-known in activist circles. It should be no surprise that he is not actually an authority on animal welfare. Waldau holds a doctorate in philosophy, a Juris Doctor degree, and a master’s in religious studies. He has however written numerous books on animal rights, one of the most noted is Animal Rights: What Everyone Needs to Know, which presents intellectual arguments in favor of the animal extremist ideology.

Less about choice, more about ideology

The Educated Choices Program was originally established as the Ethical Choices Program. You can still find this name on past tax returns and on certain websites. It seems that words are important here, arguably because “educated” sounds less judgmental, or less imposing, than “ethical.”

Here is where we get to what their actual mission is about, which is less about education and more about ideology. No clearer is this illustrated than on what you find under the “Next-Steps Toolkit” tab on their website. The “Next-Steps Toolkit” is full of materials with additional resources and tips for transitioning to a “plant-based” (vegan) diet. Interestingly, this includes a full page of documentaries showcasing some of the most notorious animal rights propaganda pieces including: The Game Changers, Cowspiracy, and Forks Over Knives.

A big proponent of lab-grown cell-based meat, the Toolkit also has a page about new food technologies, which include lists to vegan alternatives such as plant-based meat, dairy, and eggs. Similar to their classroom materials, they also discuss developments in cell-based meat and claim it is more environmentally sustainable and healthier. Again, this has not been proven.

It is very evident this next leg of the program is about living an entirely vegan lifestyle. It is not about choosing a diet that is appropriate to each individual and their distinct health needs. They even include a link to balanced.org to help students implement vegan school menus on their campuses. It should be noted the Balanced advisory board also has a plethora of members on the Physicians Committee for Responsible Medicine.

Other sources the Toolkit supplies are fully vegan recipes, a list of “inspiring people” (a list of celebrities, athletes, and other public figures supporting the animal rights movement and/or vegan lifestyle), and vegan options available at restaurants.

Under the “Benefits” tab they cite the first two benefits as being for personal health and the environment. The third is regarding animal benefits and states ,“Many people find all these modern animal agriculture practices conflict with their own personal sense of right and wrong.”

What is the issue? The Educated Choices Program lauds itself for inspiring students and communities to better their own health and environments by making their own choices. The only problem is that the only choice the program offers as a fix is a “plant-based” – meaning vegan – lifestyle.

They don’t appear to address the integral roles animal agriculture plays in our society. These include utilizing by-products and waste produced by other industries, improving grasslands with managed grazing, and using land unsuitable for crop production – just to name a few.

Worth mentioning, there are a host of medical and lifestyle barriers that prevent many individuals from ever adopting a vegan lifestyle. Veganism is simply not the best or healthiest choice for everyone by default.

What makes the Educated Choices Program all the more dangerous is its appearance of being credible. By citing well-known sources and cherry-picking the information they have found a way to endorse their ultimate end goal – wanting an unrealistic strictly vegan lifestyle for everyone and influencing children at school to implement it.