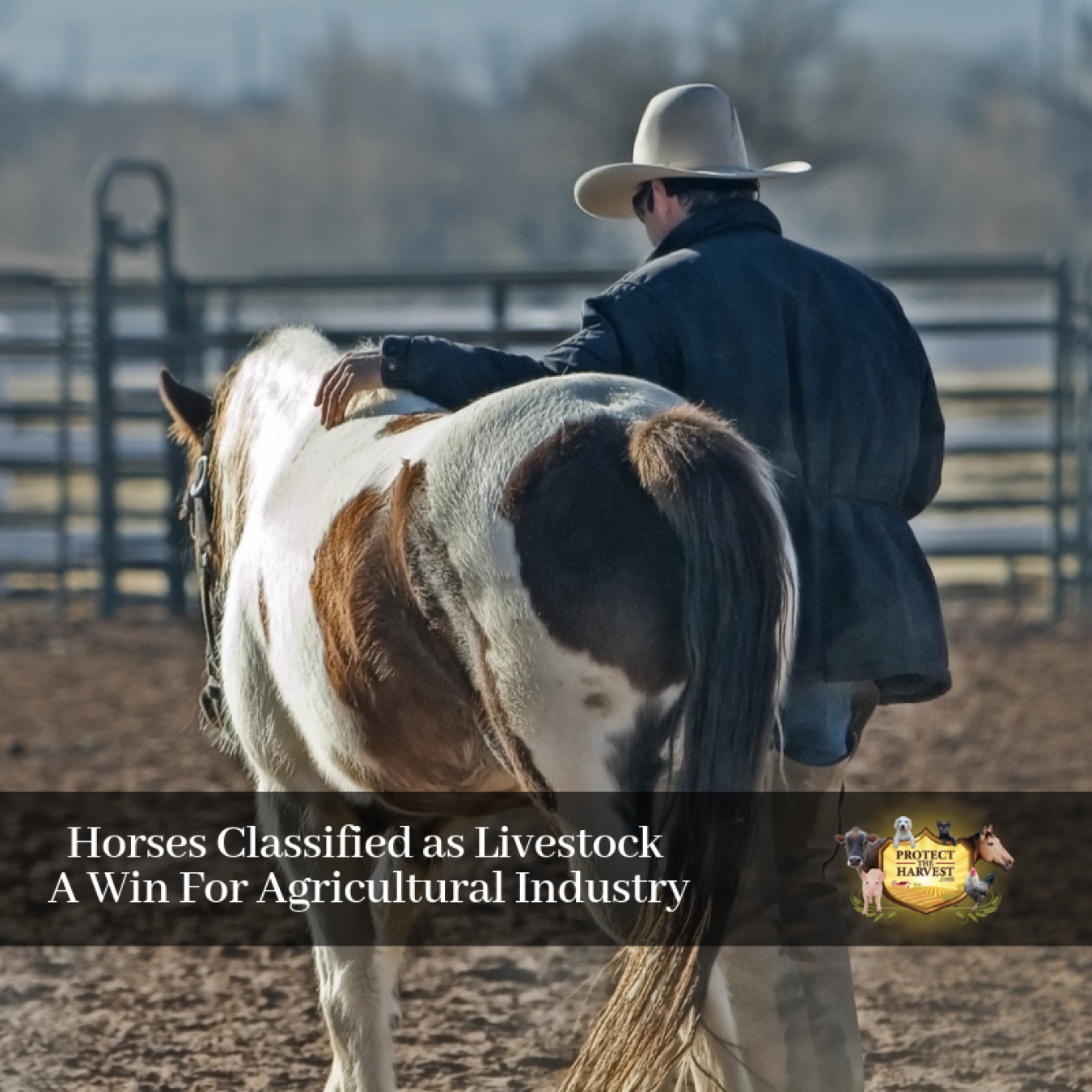 Last week, the Farm Bill was passed through both chambers of Congress and was signed by President Donald Trump. While the bill focuses largely on conservation, nutrition, and commodities titles, a “Miscellaneous” title in the bill includes most of the provisions for livestock industries. It is in this section where horses were classified once and for all as livestock.

Most states classify horses as livestock. However, to see this classification at a federal level is a win for the horse industry. Horses provide humans with many benefits and have played a key role in the history of mankind. They have been utilized in a variety of ways, for work in farming, ranching, transportation, in warfare, as a recreational past time and in many cultures as an important source of protein. Horses have different requirements than dogs and cats and other pets when it comes to their health, welfare, and housing.

Why Animal Rights Groups Push to Classify Horses as Pets

Horses have long been anthropomorphized by humans, creating emotional barriers to prevent seeing them as working and food animals. This is what animal rights groups want. Animal rights groups are searching for ways to continually over-reach and blur the lines between “pets” and “livestock.” They do this because they have found that it is easy to manipulate the pet owning public and classifying livestock species as pets allows them to more readily push legislation that will impact animal agriculture.

Regulatory burdens can become heavy and in some cases, prohibitive, should horses be considered pets. Horses classified as pets denounces their ability to be used for business purposes and removes tax benefits. A classification as “pets” could effectively damage the equine industry.
An example of this is Prop B, a law that was passed but ultimately gutted, fortunately preserving the agriculture industry in Missouri. Prop B called for any animal that can live within 15 ft of a residence to be classified as a pet. This meant that livestock could have been regulated under the same guidelines as companion animals; severely impacting all of agriculture in the state with over- reaching and burdensome regulations.

Additionally, consider Act 10 in Pennsylvania; this law was passed in fall 2017 and makes it illegal to leave dogs leashed outside for more than 30 minutes in 32 degree or colder weather. If livestock are also considered “pets,” this allows for further laws to be created that have similar language that could require additional housing or provisions that are both logically and financially unnecessary. Horses and other livestock can handle harsher weather than small animals, and owners in colder regions take measures to ensure their animals are kept warm through inclement weather. Bottom line is that horses are livestock and livestock have much different requirements.

In the Farm Bill, officially titled the Agricultural Improvement Act, or H.R.2(115), a revised statutory definition was included that removed horses from the blanket definition of “pets.” This simply means that a “statute” enacted by the government has been redefined. This began as a measure, included in the Senate draft version of the bill, titled “Pets And Women Safety” (PAWS). When discussions began to create this bipartisan bill, members asked to have horses removed from this measure, and instead, placed into their own category.
According to Congress.gov, the PAWS act equally protects animals and women in domestic abuse situations. The bill “clarifies the definition of pet to include certain companion animals, while also providing protections for other animals such as horses, service animals, and emotional support animals.” However, the revision classifies horses as “livestock,” while still covering them as “property damage” under the PAWS act, in certain cases.

An Important Victory for Animal Ownership and Animal Agriculture

The USDA solidified the definition of horses as livestock in an effort to distinguish livestock and pets from each other. This definition allows horses to be used for business purposes and for farmers and ranchers as well as recreational horse owners to properly do their job and care for their animals, without the burdensome task of heavy regulations that do not have a practical application to horses and that could cripple the animal industry. Further, this definition helps to prevent animal rights organizations from confusing the public when pushing their agenda. It is a victory for horses and animal agriculture as a whole.