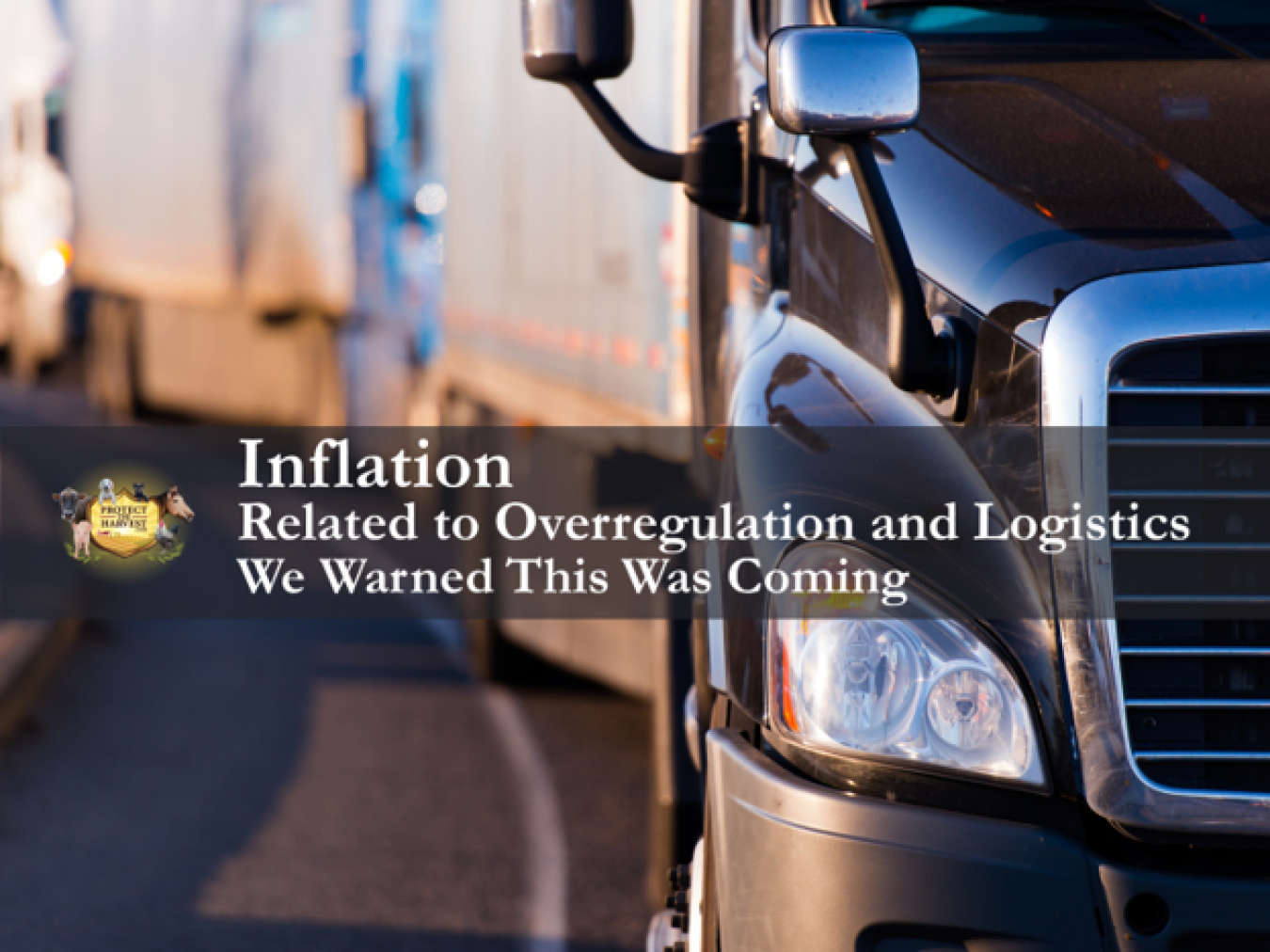 INFLATION RELATED TO OVERREGULATION AND LOGISTICS

In 2018 we wrote an article titled, “ELD Mandate Can Undo Trump’s Work to Reinvigorate U.S. Economy.” In that article we outlined the issues impacting the trucking and logistics industries as a result of “Moving Ahead for Progress in the 21st Century,” also known as MAPS 21. At the time we warned that the result would be inflation. Now, just a few years later, here we are in the midst of the worst inflation in recent history—7% to be exact, which is the highest since 1982. This is largely being driven by cumbersome regulations at the federal and state level.

Statistics show that only 16% of truck/passenger vehicle accidents are the fault of the truck driver. Nevertheless, the requirement for electronic logging devices (ELDs) was implemented in December 2017, largely under the premise of safety, with a focus on reducing driver fatigue.

The devices replaced handwritten paper logbooks that had been used by the trucking industry for over 80 years. In addition to tracking hours of driving, ELDs collect data on vehicle speed, routes, and mandated rest periods.
The ELD mandate has created a variety of complications within the industry that have made careers in trucking much less appealing overall. The freedom and earning potential that once drew people to be truck drivers have been greatly stifled by the Hours of Service (HOS) restrictions. There is a limit of 11 hours of driving and 14 hours of work per day, with requirements for breaks every 8 hours.

Some drivers say that instead of improving safety by limiting fatigue, the limits and requirements actually put them in a race against the clock to make it to their destination. In addition, since an ELD is synchronized with the truck, it does not allow for differentiation in labor allocation or timing—for example, things like team drivers that take turns at the wheel, or drivers who are able to rest while their truck is being unloaded, which would be time included within a 14-hour work day.
This onerous overreach of regulation and resulting inflexibility has driven numerous truckers to seek employment elsewhere or retire early, further stressing an essential industry that has already been challenged with driver shortages. The average age of a trucker is 48, and replenishing a predominantly middle-aged workforce was difficult even prior to the recent changes in regulation.

It should be noted that, due to the nature of hauling live cargo, the livestock industry was thankfully given a reprieve regarding the hours-of-service requirements. Livestock haulers are allowed travel an additional 300 miles while exempt from the restrictive Hours-of-Service (HoS) regulations to ensure animal welfare.

The state of California recently passed several laws governing trucking, adding more regulations to drivers and trucks in the state. These regulations have far-reaching effects throughout the nationwide trucking industry due to the sheer number of loads that originate in California from the state’s sea ports and massive agriculture industry.

The AB5 Independent Contractor law requires that truckers hauling for a company be actual employees of the company. While intended to improve worker rights and allow them access to the benefits afforded to full-time employees, it has instead dealt a devastating blow to independent truckers who contract per load with various companies. Independent truckers have historically been a majority in the industry. In fact, in 2019, the Los Angeles Times reported that out of the approximately 13,000 truckers who serve the ports at Los Angeles and Long Beach, only a few hundred were classified as employees.

Citing a need to reduce exhaust emissions, California also has outlawed trucks with engines that were made before 2010. The law took effect in January 2020 and has been enforced through the California Department of Motor Vehicles by denying registrations to trucks that don’t meet the new standards. By 2023 nearly all trucks and buses will be required to have 2010 or newer engines.

Trucking Industry Matters to Everyone

The trucking industry accounts for 70% of all freight transported in the United States. Combined with high fuel prices and various lingering effects of the covid-19 pandemic, the consequences of these multi-level, heavy-handed regulations have created a perfect storm that affects the lives of literally every consumer through supply shortages and drastic price increases in groceries and other goods. Unfortunately, the resulting increased financial strain on American families is not likely to be alleviated any time soon.

Read our warning from 2018 HERE