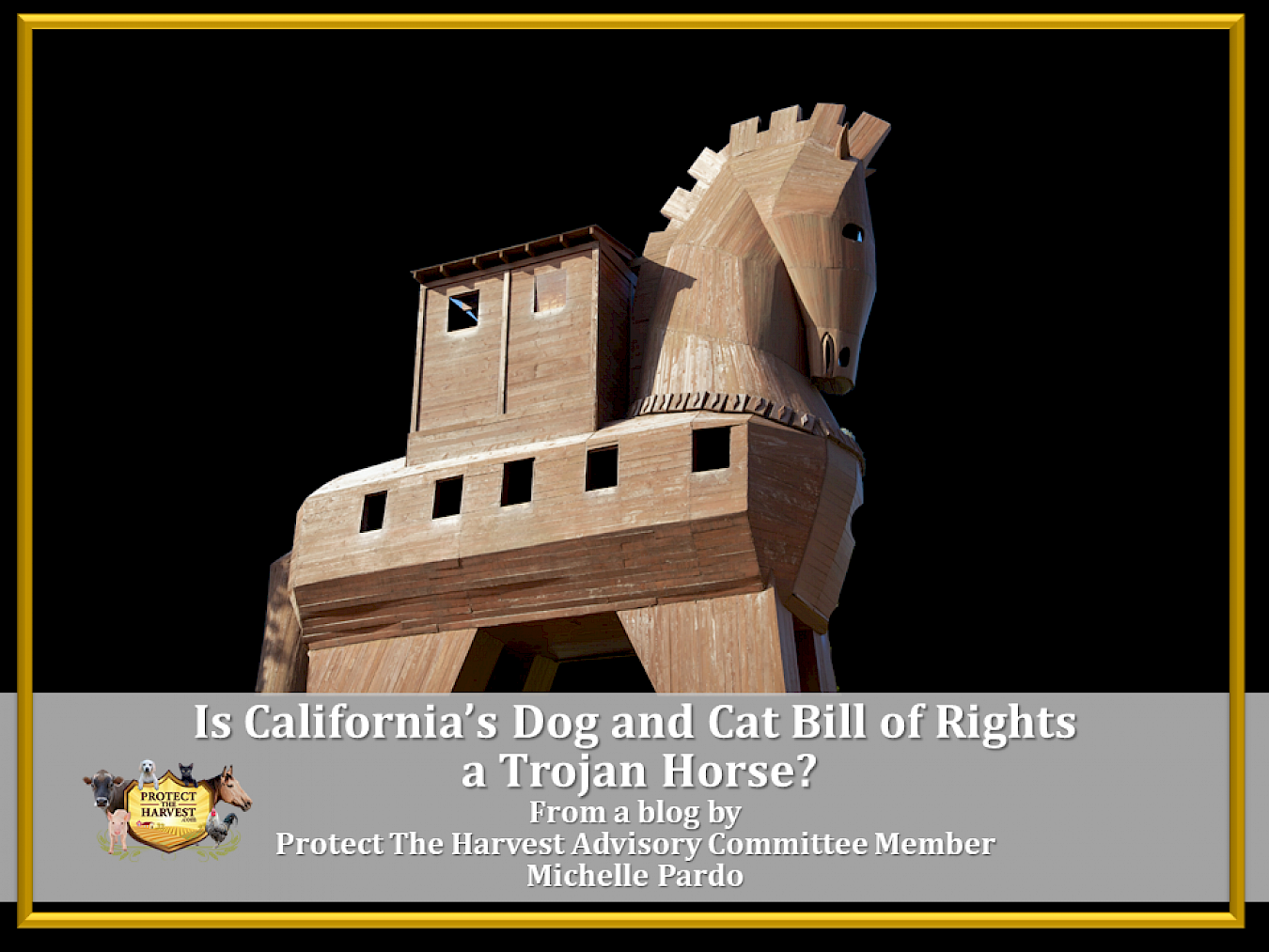 IS CALIFORNIA’S DOG AND CAT BILL OF RIGHTS A TROJAN HORSE?

On February 8, 2022, California Assemblyman Miguel Santiago (D-Los Angeles) introduced Assembly Bill 1881, referred to as the Dog and Cat Bill of Rights. The purported purpose of the bill is to inform potential adopters of the care needed to create a healthy environment for their adopted pets.

While recognizing that existing animal welfare laws address animal abuse and neglect, the pet-centric Bill of Rights seeks to codify dog and cats fundamental rights and impose new duties on local public officials and organizations to post these rights so that adoptive families can be informed of pet ownership responsibilities.If enacted, the law would codify the following rights for dogs and cats in California:

Significantly, the preamble to the bill of rights states the Legislature’s intention to declare that dogs and cats have the right to be “respected as sentient beings,” emphasizes the importance of sterilization to reduce overpopulations, and recognizes and prioritizes dogs’ and cats emotional and “mental well-being.”

As written, the law would require every public animal control agency or shelter, humane society shelter or rescue group to post the Dog and Cat Bill of rights “in a conspicuous place accessible to public view” in their facilities. The bill would create a state-mandated local program, which according to the California Constitution, requires the state to reimburse local agencies and school districts for such mandated costs. After the first offense, violations of the section would result in a fine not to exceed $250.

The bill was sponsored by Social Compassion in Legislation, an animal activist group whose founder and president was reported to be “thrilled to be codifying this into law.” The group’s legislative campaigns included support for a ban on traveling animal exhibits, aiding farmers to transition from animal agriculture to plant-based agriculture, and increasing the fines to owners of impounded, non-spayed and unneutered dogs.

As far as legislative muscle goes, on its face, the passive posting of a list of animal care responsibilities seems relatively inconsequential. It imposes no liabilities on pet owners who fail to comply with the pets’ fundamental rights. A duty to “post” does not guarantee that any adoptive owner would even read the sign. The bill also states that it would “not create or imply a private right of action for a violation of this division.” The casual reader may be left wondering: what exactly is the point of this legislation and why is the sponsoring animal activist organization viewing this as a great legislative victory?

California’s UCL (often paired with its False Advertising Law (FAL) and Consumer Legal Remedies Act (CLRA)) is a powerful tool to turn any violation of any law or regulation, federal or state, into the basis of an “unlawful” UCL claim, provided that the violation of the underlying law or regulation is in connection with a business act or practice. If the Dog and Cat Bill of Rights becomes law, theoretically a violation of the law – if an aggrieved person or organization can prove standing and economic injury – could be the vehicle by which an animal activist or organization could litigate the Dog and Cat Bill of Rights in court. The fact that the Legislature did not intend to provide a private right of action would not prevent it serving as the foundation for a UCL “unlawful” claim.

For example, if your cat activist neighbor thought you were not providing your cat with the “daily mental stimulation” that the Dog and Cat Bill of Rights required, and spent money buying USB sticks to save videos of your cat and use in an anti-cat ownership campaign, you may find yourself in court as a defendant of a UCL claim. One could imagine an organization that advocates for mandatory spay and neuter laws targeting owners that let their pets have “unwanted litters” bringing a lawsuit to recover for expenses spent on tasks that frustrated their mission. All of these are scenarios that the expansive UCL could encompass if the Dog and Cat Bill of Rights becomes law.

But it is codifying dogs and cats as “sentient beings” that likely is the reason why animal activist groups are celebrating this legislation. For years, a movement of animal activists have advocated, through a variety of unsuccessful lawsuits, that animals in this country should have the same legal and constitutional rights as humans. (We’ve blogged about these efforts: click here, here, here, and here). While these cases have been unsuccessful in getting a court to recognize this to date, the press for any legislative body to enact something to this effect is growing. If the Dog and Cat Bill of Rights becomes law, it may well be the Trojan Horse – delivering a victory that advocates for nonhuman rights have been waiting for.