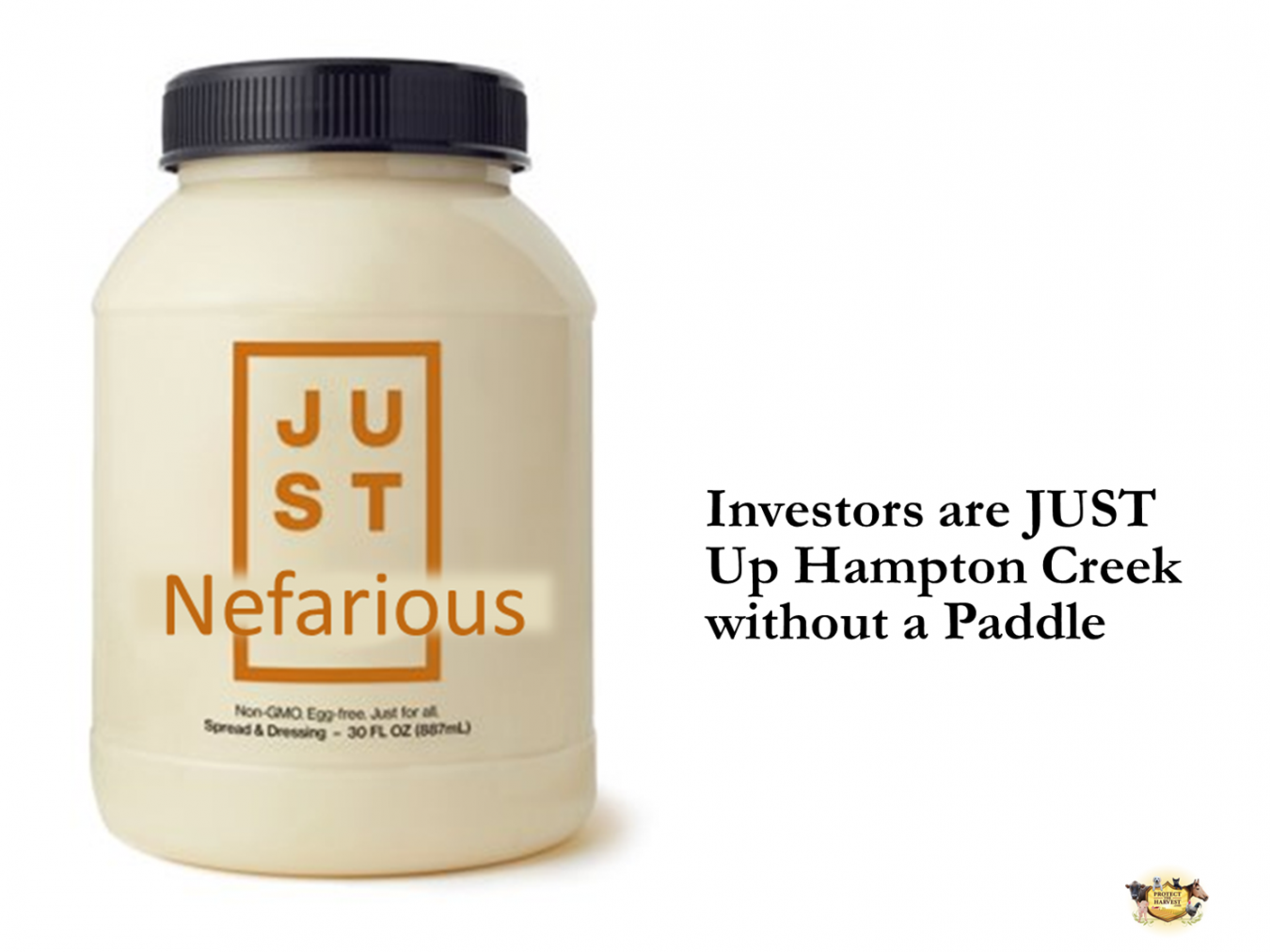 JUST UP HAMPTON CREEK WITHOUT A PADDLE

Hampton Creek is now JUST, Inc.
Why would the San Francisco based vegan start-up need to rebrand? It seems odd considering it’s a relatively new operation; founded by Josh Tetrick in 2011. Answer: they needed to try to get out from under the numerous issues regarding fraud and unethical practices. An image rebrand was in order and that’s JUST what they tried to do.

Hampton Creek raised over $220 million from investors, many of whom are involved in the animal rights industry. So, it’s not surprising the co-founder of Hampton Creek is none other than Josh Balk, the Humane Society of the United States Vice President of Farm Animal Protection.
A Page Out of the Animal Rights Playbook - Nefarious Tactics to Dupe Investors

Hampton Creek’s flagship product, “Just Mayo”, has a very questionable route to popularity. The company was accused of buying its own product to boost sales leading to a federal investigation. The U.S. Securities and Exchange Commission (SEC) and the Justice Department looked into violations of criminal fraud. There appeared to be a nationwide network of recruits buying “Just Mayo”, faking consumer demand for the product. With connections to the HSUS via co-founder Balk and familiarity with the organization’s highly successful tactics for duping people out of their money, this comes as no surprise. Animal rights organizations and their members are well known for employing nefarious tactics to achieve their goals.

Five former employees admitted to buying back “Just Mayo” from Costco, Target, Kroger, and Walmart in large quantities. Evidence was found in e-mails and receipts that Bloomberg reviewed during their investigation and it can be found here: https://www.bloomberg.com/news/articles/2016-08-04/food-startup-ran-undercover-project-to-buy-up-its-own-products

Hampton Creek Consultant Resigns After Just 9 Days Concerning Illegal Practices
In 2014, Hampton Creek hired a liaison, Ali Partovi. Partovi and his brother were already Hampton Creek investors. Per the investigation by Bloomberg, Partovi only worked nine days before speaking out against Josh Tetrick’s illegal practices. He stated, “If an investor discovers it during due diligence, we could lose financing and run out of cash. If they don’t, they’ll realize they were duped within months, and they might have a case for fraud.” He then resigned, saying he and his brother felt duped.
https://www.bloomberg.com/features/2016-hampton-creek-just-mayo/?MPA_Daily_News_Roundup

Mass Exodus of Hampton Creek Board Members – Spurs New Name
By July 2017, all of the board members tendered resignation, that is except the founder, Josh Tetrick. Apparently, the mass exodus of the Hampton Creek board spurred the renaming and rebranding to JUST, Inc. Shortly before the board resignation, Target decided to pull Hampton Creek items off its shelves. While the full reason behind this is not known, a Target spokeswoman released this statement:

“Pending a full review, Target started a market withdrawal of Hampton Creek products, which are being removed from Target stores and target.com,”

Shortly after that statement, they released another statement in August 2017:

“We are not planning to bring Hampton Creek products back to Target and have openly communicated our decision with the Hampton Creek team.”

Employee Reviews That Are JUST Scathing
Employee reviews of Hampton Creek on Glassdoor are quite telling. It should come as no surprise that current and past employees of Hampton Creek/JUST, Inc. only give Josh Tetrick a 46% approval rating as CEO.

Some of the comments made on the website include:

• “...erratic tantrums by select leadership members, sometimes a culture of fear was present, some managers lacked people management skills, some people were put into roles they had no experience in, nepotism amongst siblings, bias toward persons with disabilities...”
• “The trends at Hampton Creek should not be normalized, nor should they be compared to successful companies with intelligent and proven leadership.”
• “When he doesn't get what he wants, he throws a toddler temper tantrum (sometimes for all to see), yelling at innocent employees who try their best to give him their best, rational advice.”
• “Sexual Harassment – CEO has confirmed history and isn’t the only leader in the company to be accused and not even get a slap on the wrist.”
• “It is truly amazing how much positive press the CEO receives and how he dupes people. He receives "executive of the year," one day and then is struggling to pay rent and payroll. It is a head shaker for sure.”
• “Josh Tetrick is common thread to all problems plaguing Hampton Creek.”
• “CEO is a great talker, but actually has no idea what he is doing.”
• “Nepotism is rampant. Promotions at Hampton Creek are only given to Tetrick’s family or to those who’ve been around long enough to know where the bodies are buried.”
• “Many unethical decisions are made, and employees, investors and the media are kept in the dark.”
• “Overall, really awful company that uses manipulative and oppressive tactics to create a very unhealthy and unhappy work environment.”
• “...being asked to do unethical things in order to meet deadlines, including lying about ingredients on a handful of occasions to investors and other stakeholders.”

Hampton Creek Investors
Josh Tetrick and Josh Balk have somehow managed to persuade some influential investors into joining Hampton Creek/JUST, Inc. With Balk’s connection to the HSUS, he has a large database of donors that are willing to dump their money into anything vegan and animal rights oriented.

Along with attracting animal rights ideologues, another large group of investors were tech startups. Just to mention a few of the more substantial Hampton Creek donors: Khosla Ventures, Brian Meehan, Marc Benioff, Eduardo Saverin, Jean Piggozzi, OS Fund, and WP Global Partners. Using influential names like Bill Gates in a September 2013 press release in an attempt to garner more investors seems par for the course. Gates did not personally invest in Hampton Creek, but he did invest in Khosla Ventures, one of Hampton Creek’s earliest investors.

Lack of Compassion
Josh Tetrick is an animal rights ideologue. The animal rights industry has a poor track record when it comes to compassion for people. In fact, it is almost common place for high profile animal rights organization leaders to resign in the shadow of sexual harassment complaints. In 1998, Tetrick was charged with assault to his mother for kicking her bedroom door in. She called the police and stated that she was afraid he would hurt her. https://www.businessinsider.com/hampton-creek-ceo-complaints-2015-7

Rewards for Sexual Favors
Tetrick has no problem sleeping with Hampton Creek employees, except when his girlfriend found out. Instead of firing the employee, as suggested by his girlfriend, he promoted her for fear of having a lawsuit filed against him. Former employees have come forward and said work ability was not rewarded at Hampton Creek. Instead they shared, “It was all if you were sleeping with him or if you came from money and have influential ties.”https://www.businessinsider.com/hampton-creek-ceo-complaints-2015-7

Lack of Experience or Actual Expertise
A common thread within the animal rights industry and ideology is to claim expertise about animals. Those claims most often cannot be backed up with any education or real-world practical experience. Josh Tetrick seems to be no exception. Work history and character are also called into question. An article in The Atlantic stated he had worked for many impressive organizations after finishing college. However, he never lasted more than a year in any of those jobs. Then he founded Hampton Creek. One would think a bit more workplace experience would have benefitted someone asking investors for millions of dollars. It is clear, based on the comments from his employees listed above, that he has little experience in a management role. https://www.theatlantic.com/magazine/archive/2017/11/hampton-creek-josh-tetrick-mayo-mogul/540642/

Who is Josh Balk?

Animal Rights Playbook In His Back Pocket
Josh Balk, Vice President of Farm Animal Protection at the Humane Society of the United States, is a longtime friend of Josh Tetrick. In fact, he guided Tetrick into animal rights and veganism. Working closely, they started the vegan-based food enterprise, Hampton Creek/JUST with animal rights in mind. Similar to the HSUS, companies like Hampton Creek/JUST have no problem deceiving donors and investors. Both groups also seem to have major problems surrounding sexual harassment and office relationships.

He Knows That the Animal Rights Industry is Big Business
Balk did not start his animal rights career at the HSUS. His work began at Compassion Over Killing, another extreme animal rights group. Balk seems to know he can profit off being an animal rights extremist. Milking the system for all it has. Having Josh Balk connected to Hampton Creek/JUST is a direct pipeline to the seemingly never-ending funding available to the HSUS. It is no surprise that he jumped on the Hampton Creek bandwagon as a co-founder.

Investing in Hampton Creek is JUST Insane
It is quite incredible that Josh Tetrick and Josh Balk have been able to scam so many people out of their money with Tetrick’s obvious lack of experience. Hampton Creek has received $220 million from investors, some who should have known better. This company was founded eight years ago and is estimated to have an annual revenue of JUST $30 million despite the massive influx of investor funds. Could this be due to the fact that vegan mayo just doesn’t have that much demand? Faking sales on a large enough scale that a federal investigation is launched sure makes it look that way.

How have Tetrick and Balk pulled the shades over intelligent investors eyes? Why aren’t investors bothered by all of the scathing reviews, accusations made by past employees, the federal investigation, and the lack of return on investment? Based on all of the public information about Hampton Creek/JUST it appears the company is run by an egomaniacal person who has no respect for anyone including his own mother.

It is pretty clear that animal rights extremists with money to invest in their agenda don’t care about ethics, morals, respect or compassion. With an unending pool of money to dip from, companies like Hampton Creek/JUST will have no problem finding investors as long as they preach the animal rights message.