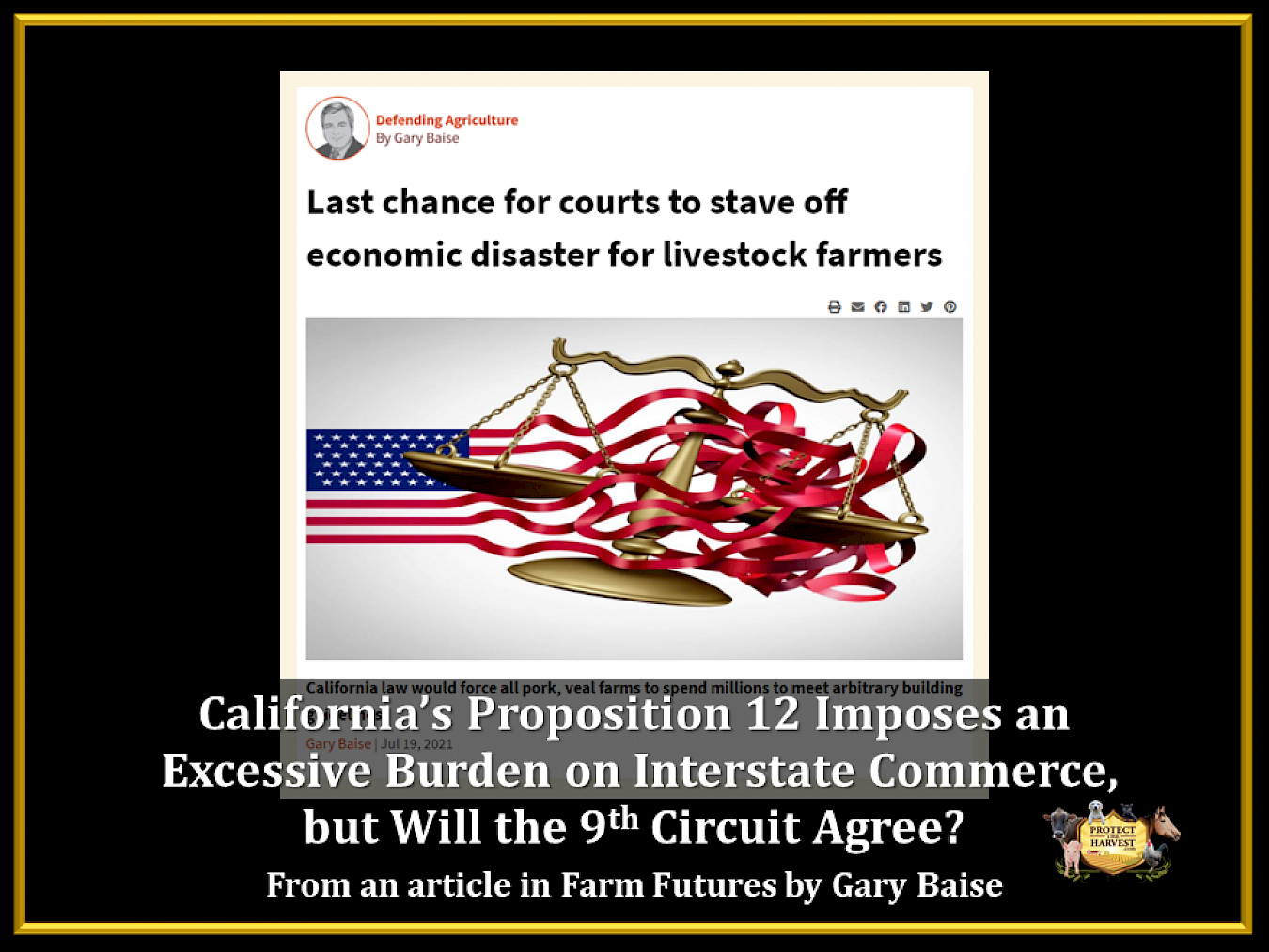 Last week’s blog on July 15 painted a bleak picture about how California’s, Proposition 12 law will force pork and veal producers in the Midwest to restructure their facilities to meet that state’s arbitrary animal welfare rules.

The Ninth Circuit, which is the bane of agriculture’s existence with all its agricultural knowledge, has one more case which might be appealed to the U.S. Supreme Court if lost in the 9th Circuit. That case involves farmers represented by the National Pork Producers Council (NPPC) and American Farm Bureau Federation (AFBF).

This case is presently awaiting a final decision which could come any day, including this week.

This case had a 49-page reply brief filed on January 14, 2021 entitled NPPC v Ross. Instead of seeking an injunction against Proposition 12, as NAMI (North American Meat Institute) did, NPPC and AFBF probably will lose in the 9th Circuit in the next few days; then it’s possible the case ends up before the U.S. Supreme Court.

As we wrote last week, most people reading California’s Proposition 12 believe it violates the Commerce Clause of the U.S. Constitution. NPPC claims 99.8% of the pork Californians consume is imported from 20 states. As a consequence, “…any cut of pork reach[ing] California necessarily bears Proposition 12’s substantial costs, meaning that farmers and consumers everywhere pay for California’s preferred animal-housing methods.”

So, you will see your bacon and pork prices increase even more.

Why didn’t NAMI get its day in court? NAMI represents primarily packers. These are the slaughterhouse operators and are not a favorable or sympathetic plaintiff. NPPC and AFBF are farmer organizations, many of whom operate sow farms.

This case presently before the 9th Circuit discusses Illinois farmer Phil Borgic, who claims that Proposition 12 will cause him to spend approximately $3 million to retrofit his farm or go out of business. These real-world impacts caused by California’s Proposition 12 should have an impact on the courts. That’s because Proposition 12 is regulating the transactions of Midwestern farms that occur clearly outside the state of California. California already is sending out inspectors to determine if egg laying chickens have appropriate space to meet the state’s arbitrary standards. Can you imagine a California agent coming to your hog or veal farm? In fact, all that Proposition 12 does is regulate out of state conduct.

According to the reply brief, Californians “…consume a large proportion of the Nation’s pork - about 13% - but that California farmers produce only a miniscule fraction of that meat.” Consequently, virtually all the pork sold in California comes from other states, particularly in the Midwest.

NPPC’s and AFBF’s brief also articulates that Proposition 12 requires each farmer to provide each sow with at least 24 square feet of useable floor space. The square-feet and the breeding stall ban “…are affirmatively harmful to sow health.” This will impose millions of dollars of upfront costs on all sow farmers and if the cost cannot be afforded, it will decrease herd sizes and consequently the cost of pork will increase.