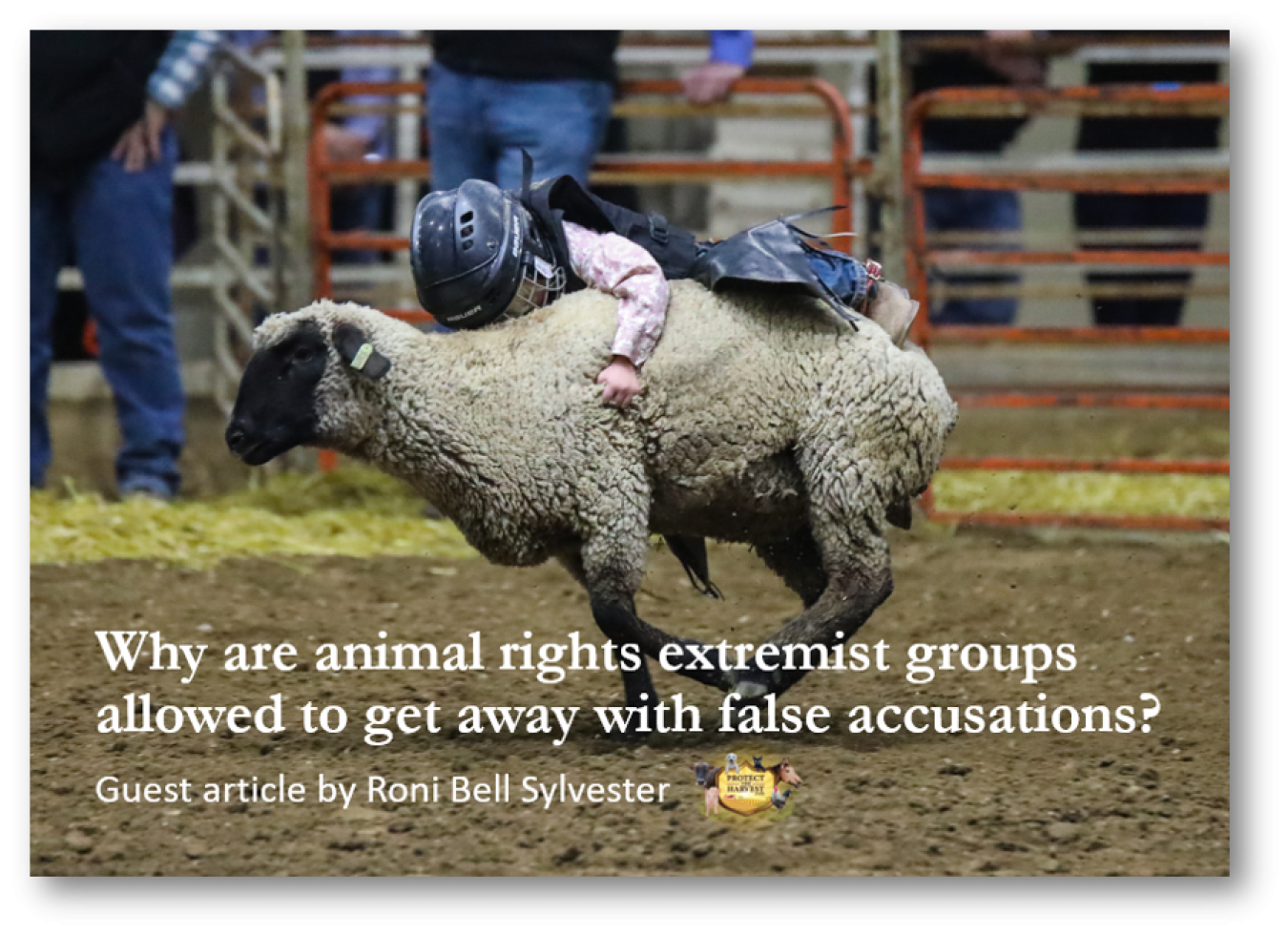 WHY ARE ANIMAL RIGHTS EXTREMIST GROUPS ALLOWED TO GET AWAY WITH FALSE ACCUSATIONS? 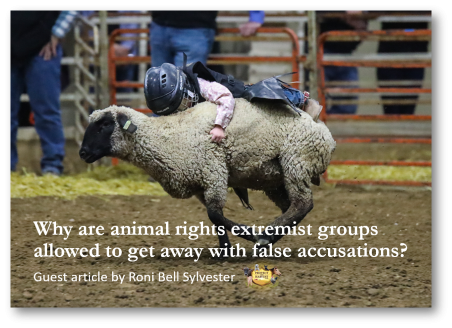 Why Are Animal Rights Extremist Groups Allowed to Get Away with False Accusations?

Guest Article by Roni Bell Sylvester, Colorado Resident Amy Hsiung, Samantha Francis and Aidan Cook in conjunction with PETA, Direct Action Everywhere (DxE) and other animal rights extremist groups, are gathering thousands of signatures to stop mutton bustin’ at the National Western Livestock Show and Rodeo. When I read reports in the news about this I immediately sought input from my husband, Chuck Sylvester.

Why would I ask my husband?

My husband Chuck, knows the National Western Livestock Show and Rodeo (NSSW) intimately. When he was about 3 years old, his dad held him on his shoulders, so he could see the action in the arena. As a young boy, Chuck first showed a steer in 1952 and years later in 1975, he was manager of the NW Livestock Center (The old Denver Union Stockyards). In 1978, Chuck became General Manager National Western Livestock Show, retiring in 2003 after serving 25 years.

Growing Up on a Farm is a Blessing

Chuck talked about his experiences growing up on a farm and how beneficial it is for children to learn about farming and farm animals. “I was blessed to have grown up on a farm. Feeding, appreciating, doctoring, grooming, petting and hugging animals is one’s only way of going. You grow up helping a cow birth her calf, a sow farrow, a horse foal, a sheep lamb, a cat have her litter and so forth. Making sure the brooder house and waterer are kept just right so your baby chicks will grow into good laying hens, and later fryers, you learn responsibility. One of maybe 2 times I ever saw my tough old farmer father cry, was when the brooder heater broke, and all the baby chicks died. “ “Being a part of a family farm, you learn quickly, not to leave a gate open or a water tank frozen over with ice; for you will be held accountable for any harm to a critter. You know that if you take good care of your creatures, they’ll take good care of you. When thrust into the city, I found that most urban children don’t have such opportunities. Then unfortunately, too many of them grow up to be adults like the PETA-backed, Mutton Bustin petitioners - who don’t know the difference between animal welfare and animal rights.”

The Difference Between Animal Rights and Animal Welfare

Chuck then went on to talk about the difference between animal rights and animal welfare and how these animal rights extremist groups raise money – claiming to use the money on behalf of the animals. Instead, they sit in their office in the city, using that money to attack the very people who are doing the real work of caring for the animals day in and day out. “While we gather up hay for the horses, PETA gathers signatures for their personal financial gain. I believe the rights an animal has, is the right to our welfare. And that’s what we give them.”

Care of the Animals at the National Western Stock Show

Chuck still serves on the Animal Care and Use Committee for the National Western Stock Show. The Committee Chairman is Colorado State Veterinarian, Dr. Keith Rohrer. Chuck says, “The welfare and well-being of animals is the highest priority of the Committee and The National Western Livestock Show and Rodeo. The roping calves, steers, horses (Rodeo stock) are given the best medical care, the best feed and bedding, as well as grooming. In so far as the show animals, the staff at the National Western Stock Show stay on top of waterers, bedding, electrical outlets and every detail to make sure they remain healthy and happy.” The Animal Care and Use Committee includes representatives from the Rodeo and the Livestock Show. They are stock contractors, horse show representatives, as well as professionals in animal care and welfare including C.S.U. Animal Ethics Professor, Dr. Bernie Rollin, and world renowned equine practitioner Dr. Marvin Beeman.

The Children’s Area at the Stock Show

Chuck also mentioned that helping children learn about animals was one of the most rewarding parts of his job. He said, “On the 3rd floor of the Hall of Education (NW complex) there should be a sign that reads: “Caution. Children’s laughter zone. If you are offended, do not enter.” One of the most rewarding parts of my job happened each time I walked out of my 3rd floor office, directly into what we called “the children’s area.” Hearing the children’s squeals of laughter and seeing their eyes wide and happy with joy as they petted a goat, saw a cow being milked and a duck waddle filled my heart with gratitude. The FFA Children’s Barnyard has pony rides and numerous attractions that reach out and help thousands of youth have fun while learning about critters from ducks to yaks.”

Why would anyone want to stop a family from having safe wholesome fun?

Stopping the Mutton Bustin at the National Western Stock Show is nothing but a move by animal rights extremists to push their ideology on others. Eliminating the opportunity for children to interact with animals is just one way they are going about it. They make claims about the safety of the animals. Here’s what Chuck had to say about that, “I can assure you that in my 25 years as General Manager of the National Western Stock Show, never once was any child, adult or sheep harmed in the Mutton Bustin event.” This is still true today. “For all those years, the foundation I used to build the Stock Show on was to keep the children entertained. Observations proved that, in order to ensure all the events – including the rodeo - are successful, is to keep the children interested. Happy children equal happy parents. If the kids get restless and fussy, the parents get restless. The squabbling begins and the family leaves the show,” he continued. “Over its 112-year history, thousands of cheerful volunteers have given millions of hours to help the National Western sustain its healthy, happy, constructive activities for people of all ages. They love volunteering, and the Stock Show couldn’t walk, much less run without them. It angers me that the petitioners want to kill that enthusiasm too! The real and everlasting beauty of the National Western is that it’s family entertainment. Let’s continue working together, to ensure another 112 years.”

The news reports about the petitions gave me a flashback to seeing Benny Butler’s bucking horse – born with a Parrot mouth – being used in animal rights materials; HSUS, PETA, Steve Hindi’s Shark, ASPCA, ALF or whatever. In my mind they’ve all become one. Their claim was that Butler abused the horse so it looked that way. My claim was, “They’re using Benny Butler’s property – without his written consent – for their money raising propaganda. That’s illegal!”

They Shouldn’t Be on the News Without Proof

Why does the news allow these extremist groups to make accusations without proof? In the recent news reports Aiden Cook of the animal rights extremist group, Direct Action Everywhere (DxE) claimed: “If we thought (this was) an event where we strapped kids to the backs of terrified dogs and ran them around for our enjoyment, people would be outraged.” Then Cook charged, “…terrified prey sheep sees the child as a predator, often leaving animals seriously injured…” There are many questions that deserve answers. Don’t you think they should be held to proving their charges?

I have a lot of questions for DxE and their affiliated animal rights extremist groups:

We sent a letter to DxE and are awaiting an answer. We asked them to provide the names and contact info for the professionals they use, documents that show the dates and locations of their research, and their peer reviewed findings. The petition stated, “…the activity to be cruel and barbaric.” Don’t you think they should have to show their analysis and more? They charged, “The entire Western Stock Show is a very violent event.” DxE claims to be spokespersons, “speaking as allies to nonhumans.” Don’t you think we have the right to demand disclosure of which “nonhumans,” donkeys, cows, turtles, or other animals that voted for them? Don’t you agree it’s essential to know whether the voting was a consensus or a counted show of paws, hooves and webbed feet? Were the voters feral or domestic? Were any animals excluded? What does DxE, Amy Hsiung, Samantha Francis, Aidan Cook and their affiliates want their petition to accomplish? To raise more money for them? A costly joke, publicity stunt, or what? Do signatories sign online, in person, or are they collecting signatures in several ways? If they provide their contact info, what is their origin breakout? Are petitioners paid, or volunteer? How are signatures counted and reviewed for legitimacy?

DxE and Their Affiliates Should Be Held Accountable:

Has DxE, Amy Hsiung, Samantha Francis, Aidan Cook and their affiliates provided any projections as to how much their actions will cost Colorado taxpayers? If their actions have subjected any entity to costs, shouldn’t they be personally held to reimbursing Colorado taxpayers? Did DxE, Amy Hsiung, Samantha Francis, Aidan Cook, PETA and other affiliated groups seek and receive written consent from the NWSS, parents, attendees, livestock owners, the City and County of Denver, the Coliseum and NWSS sponsors, to use their property (includes person, ads, livestock etc.) in their petition/fundraising materials? Documentation has already revealed the willful actions by Amy Hsiung, Samantha Francis, Aidan Cook and their affiliated animal rights extremist groups have subjected the NWSS, its Attendees, Parents of Children Participants and Livestock Owners to harm including: Creating nuisances that needlessly- possibly intentionally - disturb, violate, and encumber rightful usage of property, endanger livestock and human life, create financial burdens, kill the happiness of volunteers, attempted to extinguish historic customs and cultures, and destroy Family Entertainment. Perhaps the City and County of Denver and Governor Hickenlooper should demand they either state the laws they believe give them the authority to extinguish historic customs and cultures of Denver and Colorado, or “get out of town!”