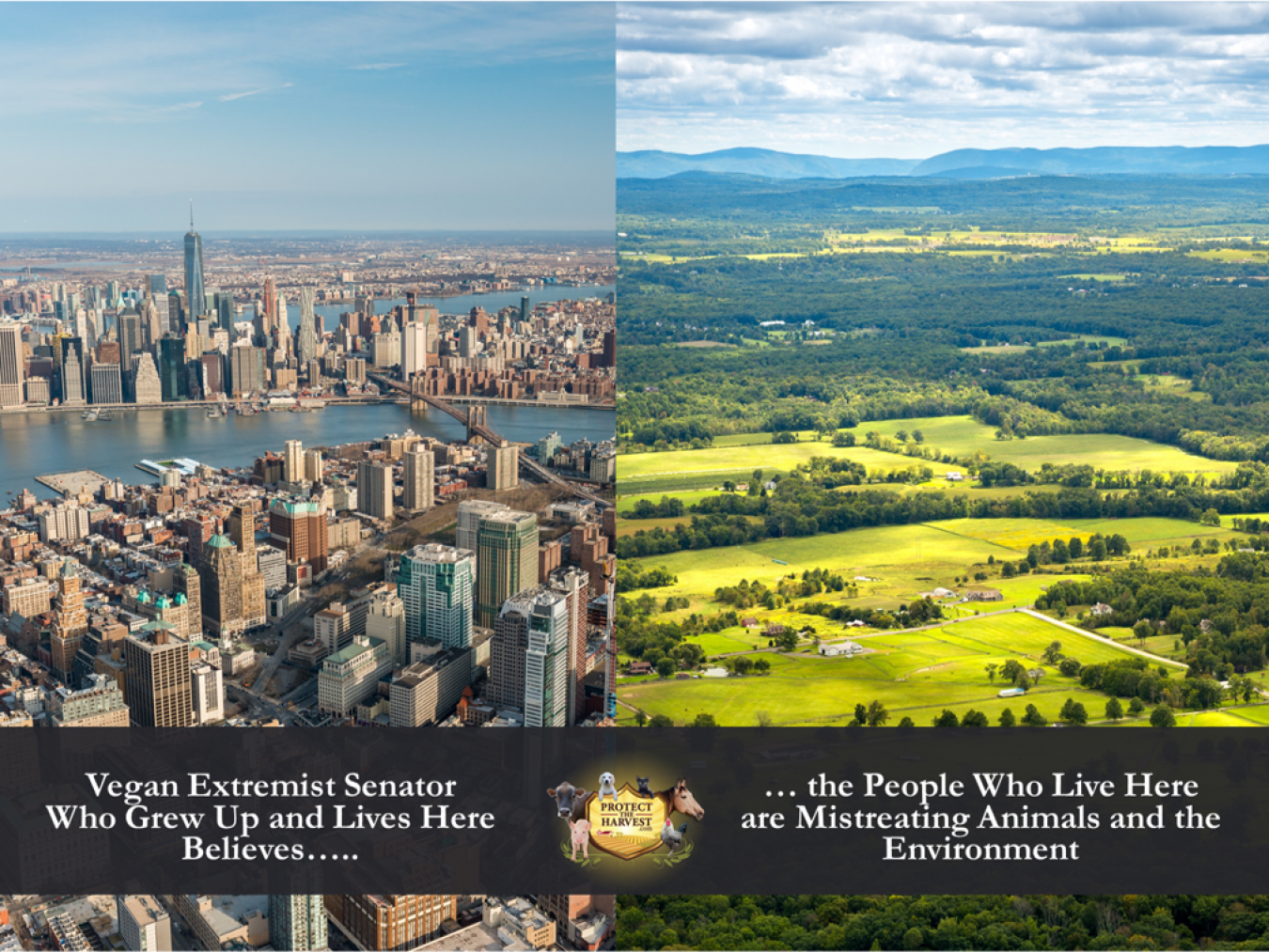 In November 2020, New York elected another animal extremist vegan to the state legislature. Senator Jabari Brisport, native Brooklynite, progressive politician (Democratic Socialist), was elected to represent the 25th district (Brooklyn). In his own words, his family is from the Caribbean, but, “I’m a Brooklyn boy, born and raised. I’m an actor, teacher and activist-organizer for many causes, including animal rights.” Remember these words. Brisport has absolutely NO background in agriculture, animal husbandry, nor farming. Even with no experience in the industry, he feels he can state unequivocally that, “The egg and dairy industries are awful.”

Pushing His Personal Beliefs on the Public

Brisport believes that his veganism is not just a personal choice, but it has to be a “political choice.” He has gone on record as saying, “It’s not enough just to remove my own dinner plate from the equation. I have to address the system that is causing suffering to billions of animals every year.” In other words, he aims to force HIS eating habits on the constituents, regardless of their personal preferences and regardless of the fact that animal agriculture does not cause suffering of animals.

Senator Brisport gained endorsements during his campaign from a variety of organizations and politicians with the same ideology as his such as: Voters for Animal Rights, League of Humane Voters, the Green Party, Democratic Socialists of America members, Congresswoman Alexandra Ocasio-Cortes, Sen. Bernie Sanders, State Sen. Julia Salazar, actress Cynthia Nixon, and Canadian author, professor, and activist Naomi Klein.

Brisport entered the animal extremist world in 2016, when he decided to join a protest at the opening of a Canada Goose store in New York City. Canada Goose, for those who aren’t aware, is a high-end, cold weather (-30C) outdoor wear company based in Canada. They use goose down and coyote fur in their products, which is why they were being targeted by the group. In a video of the protests, the protesters claimed that coyotes were just like “little dogs, like the dogs we have.” Based on that statement, it is pretty clear these protestors Brisport joined have never seen a coyote kill a calf as it is being born or scale a 6-foot fence to kill a backyard pet.

Since that first Canada Goose protest, Sen. Brisport has been very active as an animal extremist advocate. He next joined the board of a group called, “Voters For Animal Rights.” This groups seeks to combine animal activism and political action. One of the main goals is to elect animal extremists to political office so they can push animal extremist legislation. Sen. Brisport states on his website that his platforms include banning the sale of furs in New York, banning live wet markets, and eliminating animal agriculture, especially dairy and poultry.

Senator Brisport has a multi-faceted platform with one facet being animal rights. From his campaign website he states:
“As a vegan and animal rights advocate for many years, I believe that all living creatures are deserving of certain rights, dignity, and protection by the law. For too long we have allowed big animal agriculture companies to profit by the abuse, exploitation, and commodification of animals. We can create a state where human beings and animals safely coexist without exploitation and abuse. To do this we must institute legislation that establishes legal rights, safety and protections for wildlife, farm animals, and domestic animals.”

Banning large modern farms falls under Brisport’s ideological agenda of environmental and animal extremism. Senator Brisport, as made statements that, “animal agriculture involves not only inhumane practices for the animals themselves, but [also] things that are really not good for the public health of humans.”

This article was published in BK Reader June 20, 2020. To read the article click HERE

Nobody will argue with the fact that animals need to be treated well and animal welfare should be a top priority. Conversely, Brisport mistakenly believes the rhetoric from animal and environmental extremist groups which push propaganda that modern animal agriculture is bad for the environment. This viewpoint makes us wonder whether Senator Brisport has ever visited a farm, large or small, to see exactly how well the animals are cared for, how the land is maintained and kept sustainable. We also question whether he has researched the carbon footprint of urban areas such as Brooklyn, as opposed to rural farmland.

Brisport Used His Office to Participate in a PETA Easter Promotion

Brisport teamed up on April 3rd, 2021 with PETA supporters at his office in downtown Brooklyn to give away more than 100 meat-free “ham” roasts to passersby. “Easter is about celebrating life, and we are including pigs—who want to live, feel happiness, and enjoy the sun—in that celebration,” says PETA President Ingrid Newkirk. “PETA is delighted to partner with Sen. Brisport to help families celebrate the holiday with one of the many delicious meat-free roasts on the market today.

Following in the footsteps of his mentor, vegan Senator Cory Booker, who maneuvered a seat for himself on the Senate Agriculture Committee, Brisport has done the same in New York. He has gained this seat with absolutely no practical agricultural experience. This trend should put farmers, ranchers, and animal owners on notice.
He aims to cut out “cruel farming practices,” many of which are good animal husbandry practices like gestation crates, veal crates and battery cages. Gestation crates protect piglets from being crushed by the sow, veal crates isolate newborn calves until they build immunity, then they are placed with other calves in group housing, and battery cages for chickens help prevent injury.

In the same BK Reader article, Brisport states:
“The devil’s in the details, but right now we are subsidizing dairy. We’re taking a chunk of the [New York State] budget and giving it to dairy farmers to subsidize them and keep them afloat. New York is, I think, the third-largest dairy producer in the country. So what I’m proposing is that we help with a transition away from dairy farming to other forms of farming….
[Dairy farmers] can start growing industrial hemp, they can grow other crops, they can do so many other things. Rather than giving [dairy farmers] money to keep propping up this dying industry, let’s use the money as grants for them to refit their equipment, start planting new crops, and transition out of [producing animal dairy]. It should be troubling for everyone that dairy farmers are committing suicide.”

Brisport Shows Lack of Humanity and Empathy for Dairy Farmers

Brisport’s statement using farmer suicide as a justification to end dairy farming demonstrates a horrifying lack of empathy for his state’s residents. In a recent article in Ag Moos, dated March 29th, 2021, “NY Senate Ag Hearing: Ag Law Attorney Shares Her Concerns for Family Dairy Farms,” Lorraine Lewandrowski, an agricultural law attorney addressed the New York State Senate Ag Committee in a recent hearing. The article stated, “She bluntly addressed Senator Jabari Brisport of Brooklyn, who is a new member of the NY Senate Ag Committee, about his own comments as a vegan activist, and the damage such comments do to New York’s own rural farmers. “Rural New York has been viciously neglected. When farmers come to my office and tell me they feel dead, I worry,” said Lewandrowski.

“This is directed to Senator Brisport: Senator, I heard your words as you led a rally in New York City calling for New York’s dairy farms to die. Your exact words: ‘Let dairy die the death it needs to die.’ Two hundred miles away, I was dealing with a woman who found her son hanging dead in the barn, too ashamed to speak of his death.”

“Senator Brisport, I will not forget your cruel words directed to the working farmers of this state whom I know and love,” Lewandrowski said candidly. Dairywoman Tammy Gendron of Willet also referenced concerns about Sen. Brisport’s activism against dairy and livestock production in her comments later in the session.

Senator Brisport eventually apologized for his word choice of “death” when speaking about dairy at the vegan rally, but it is clear he was disingenuous. In reference to Lewandrowski’s request that the state legislature legalize whole milk in schools, Brisport stated that as a sitting Senator on the New York Senate Ag Committee: “I don’t believe dairy should exist, just as I don’t believe any animal agriculture should exist, so you can count me as a ‘no’ vote on any whole milk in schools…”

To view the statement clickHERE

With so many food insecure people in New York City, Senator Brisport would deny the children of the city the opportunity to have nutritious, vitamin packed milk with their lunches.

It is important for the agricultural community in New York state to be very aware of Sen. Brisport’s stated plan of pushing his personal agenda of veganism and animal extremism on the public. Who else might Brisport recruit and support for a political position? It certainly won’t be someone who supports the farmers in New York.

Protect The Harvest will continue to keep an eye on this, as well as other concerning events across the nation.