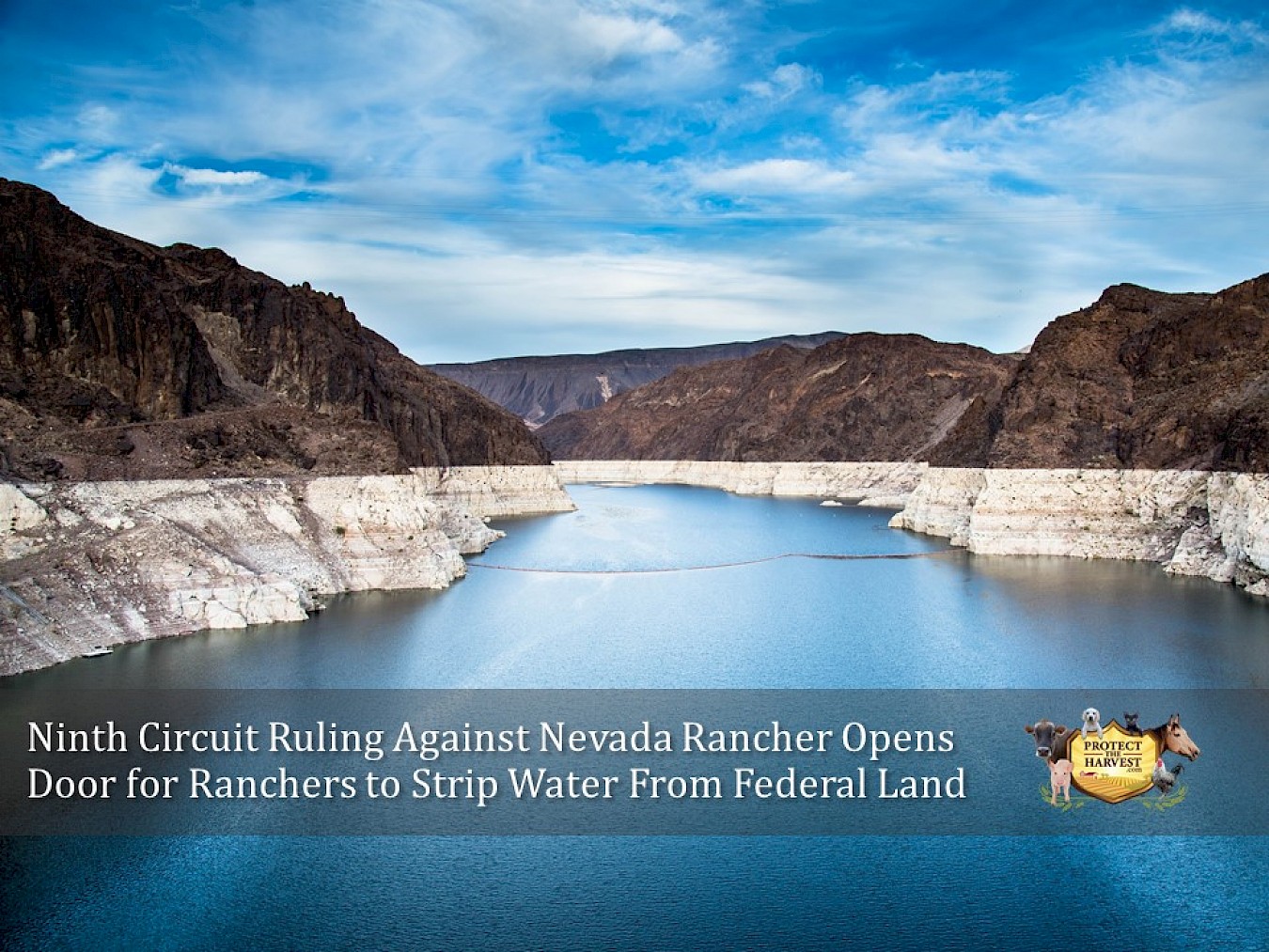 Water is life—not only physically, but economically as well. In modern America, nowhere is this more apparent than it is in Nevada, where the Southern Nevada Water Authority (SNWA) seeks to pipe water away from rural eastern Nevada to supply the city of Las Vegas. In what can be only described as a water mining project in a state receiving less than six inches of rain per year, the proposed pipeline would run along the Nevada/Utah border, cost approximately $15 billion dollars, and pump 27 billion gallons of water (about 84,000 acre/feet/year) to Las Vegas. This is not the first time this kind of project has been suggested. SNWA first proposed such a pipeline in 1989, and has rightfully been fought every step of the way.

Building such a pipeline would be permanently devastating to the land and all of its inhabitants, from native wildlife to family ranchers. However, a little known 9th Circuit ruling in U.S. v. Hage, may pave the way for ranchers who are prevented by the government from accessing their vested waters on federally administered land to pipe their water out of wilderness areas, national forests and other federal lands. The Court has recognized when the government refuses to reissue grazing permits to ranchers who own the water on federal grazing allotments—ranches which have often been operational since the Civil War—they may pipe their water off federal land, potentially to the highest bidder such as municipalities.

Water is the Lifeblood of the Land
It's plain to see how water is the lifeblood of farms and ranches for irrigating fields and watering stock, but water is just as vital for the survival of the city of Las Vegas. Las Vegas currently gets most of its water from the Colorado River’s Lake Mead, which has shrunken substantially in the past decade. Because Nevada was poorly represented in the 1922 Colorado River Compact, Nevada is only allocated 2% of Lake Mead. Without a new, secure water source, builders would be understandably hesitant to invest in developing properties, and established residents and businesses would have increasing limitations placed on their water use—hardly a popular proposition in a city famous for decadence and excess.

Water Rights are Complex
Water rights are incredibly complex, and differ by region. In Nevada and most other arid western states, the strongest and most valuable water rights are prior appropriation rights, which were established by the first miners and ranchers that needed water to help with mineral extraction, watering of livestock and irrigation of fields. The first person to divert water for beneficial use established first rights.
Prior appropriation rights differ from riparian water rights, which were created in England and are common in states east of the 100th meridian where water is more plentiful. Riparian water rights allow “reasonable use” for a landowner whose property borders a river. The water cannot be diverted to another site for use, whereas with appropriative rights, it can, which is extremely vital in arid states like Nevada. The forward-thinking Mining Act of 1866 allowed for this conveyance—including right of ways to cross the lands of others—in perpetuity, recognizing that most often, the site where minerals were to be mined, livestock were watered, or fields were to be irrigated were not near the original water source.

First in time, First in right” Water Rights--Most Valuable
Those “first in time, first in right” water rights are passed down through the decades, being inherited, bought, and sold separately or with parcels of land. Being the first rights established, they remain the most valued and desired, especially in the driest state in the nation. Water rights are legally transferred all the time with the purchase or inheritance of property, but can also be forfeited or abandoned, in which case they are held by the state for the public and another water user can claim them. However, vested water rights cannot be abandoned without intent.

Hage family—“Canary in the Coal Mine”
Enter the proverbial canary in the coal mine regarding water rights and the lengths “interested parties” will go to obtain them. In 1978, the Wayne Hage family bought the 7,000 acre Pine Creek Ranch which included another 750,000 acres of federally administered grazing allotments in Nevada’s Monitor and Ralston Valleys. Like most Nevada ranches, it included both rangeland and vested water rights, with the majority of the water sources located on federally administered land. By state laws, established long before the inception of the United States Forest Service (USFS) or the Bureau of Land Management (BLM), the rights to the water were, and still are, owned by the Hage family, including the right to convey the water to be put to beneficial use.
Shortly after purchasing the ranch, the Hage family was approached by National Park Service (NPS) about selling the private land, but the federal agency only offered about half of what the ranch was worth, not including the values of the water rights, right of ways, and related range improvements in the offer. The Hage family water rights amount to 17,000 acre feet per year (afy). One AFY is enough to cover one acre of land with a foot of water. It is estimated that average household use is .5 afy per year; thus, the Hage water holdings would support 34,000 households in Las Vegas.
According to 2015 testimony of Ramona Hage Morrison, “The government said they didn’t need to purchase those property interests because they owned them by virtue of their being on public land,” in essence claiming the U.S. Government had a riparian right to water arising on federal land.

Treatment of Hage Family “Shocks the Conscience”
When Hage refused to sell for less than what the ranch was actually worth, it set off what has been an outright 40 year-long assault on the family’s property rights that was found by one judge to “shock the conscience of the court.” There were two immense civil cases (the 1991 Constitutional Fifth Amendment takings case of Hage v. U.S., and the 2007 trespass case of U.S. v. Hage) in which the Hages were forced to defend their constitutionally protected property rights in court.
The USFS falsely accused the Hage family of overgrazing, and in 1991, used the allegation as the pretext to confiscate 104 head of cattle with a 40-person swat team, sold the cows, and kept the proceeds, and refused to reissue grazing permits so the Hages could utilize their water rights, which led to the first case. District Court Chief Judge Robert C. Jones stated that “Beginning in the late 1970s and 1980s, the Forest Service entered into a conspiracy to intentionally deprive the defendants of their grazing rights, permit rights, and preference rights.”

Collusion between USFS and Southern Nevada Water Authority
In 2004, there was evidence presented to open court that the USFS had colluded with Southern Nevada Water Authority in trying to obtain the Hages’ water. Morrison stated in the summer 2018 issue of Range magazine: “Court records show the USFS and BLM singled out the Hage family for malicious prosecution, threats, and intimidation, and economic destruction in what appears to be a conspiracy to destroy western water law.”
In 2010, Chief Judge Loren A. Smith of the U.S. Court of Federal Claims ruled for the Hages, finding that their private property was taken without just compensation and the family was owed $14 million. The Federal Circuit Court of Appeals overturned the judgment due to a material misrepresentation of the facts before the court by Justice Department council.
Although the Hages prevailed in both cases at trial, the trespass case ruling was also overturned by the 9th U.S. Circuit Court of Appeals, a court that routinely rules in favor of the federal government and environmentalists. Instead Wayne Hage, Jr. has been slapped with a fine of nearly $600,000 for “trespassing” on remand when a new judge accepted government’s calculation of fines without supporting evidence. Hage is appealing the judgment.

USFS and BLM Force Hages to Consider Piping Water Off Federal Land
Ironically, after attempting a 40-year assault on the western prior appropriation water doctrine in the Hage cases, the USFS, BLM and DOJ unwittingly solidified the West’s water law in the government-friendly 9th Circuit Court of Appeals. The 9th Circuit shamefully overturned not only the Hages’ victory at trial, but also contempt of court rulings against the government and criminal referrals of federal officials involved in the matter. However the Court did rule, citing their previous ruling in the Hunter case, that if the government declined to reinstate the Hages’ grazing permits to access their waters then the Hages had the right to remove their vested and decreed waters from two wilderness areas and other federal lands through 1866 Act Ditch right of ways. Importantly, the valuable right of ways necessary to convey the water to Las Vegas or elsewhere were recognized as part of the vested water right.

USFS and BLM Litigation Against Hages Opens Door for Water Speculation on Western Ranches
Numerous ranchers within the jurisdiction of the 9th Circuit Court have similarly been denied access to vested water rights by the USFS and BLM. While the USFS and BLM have appeared to be on a mission to eliminate most livestock grazing, denying ranchers access to their vested water rights, they unwittingly in the Hage case have created a scenario where federal land ranches may be chiefly valuable for water speculation. Since the 9th Circuit ruling the Hages, who want to continue ranching, have been approached by a water company primarily interested in the Court’s ruling on rights of ways. Facing potential foreclosure after years of litigation and federal harassment, the Hages may be left with no choice but to send their water south to Las Vegas.
Read more about the Hage saga HERE and HERE.
At incredible financial and emotional cost to the family, the Hage cases have tragically demonstrated the true value of water in Nevada and the West, and more importantly, the great and despicable lengths that “interested parties” will go to in order to obtain it. Las Vegas’s need for water will not go away, nor will efforts to get it. Sadly, it appears the USFS and BLM, which are supposed to be protecting federal land, are more concerned about cows grazing than dewatering Nevada’s rural desert valleys.