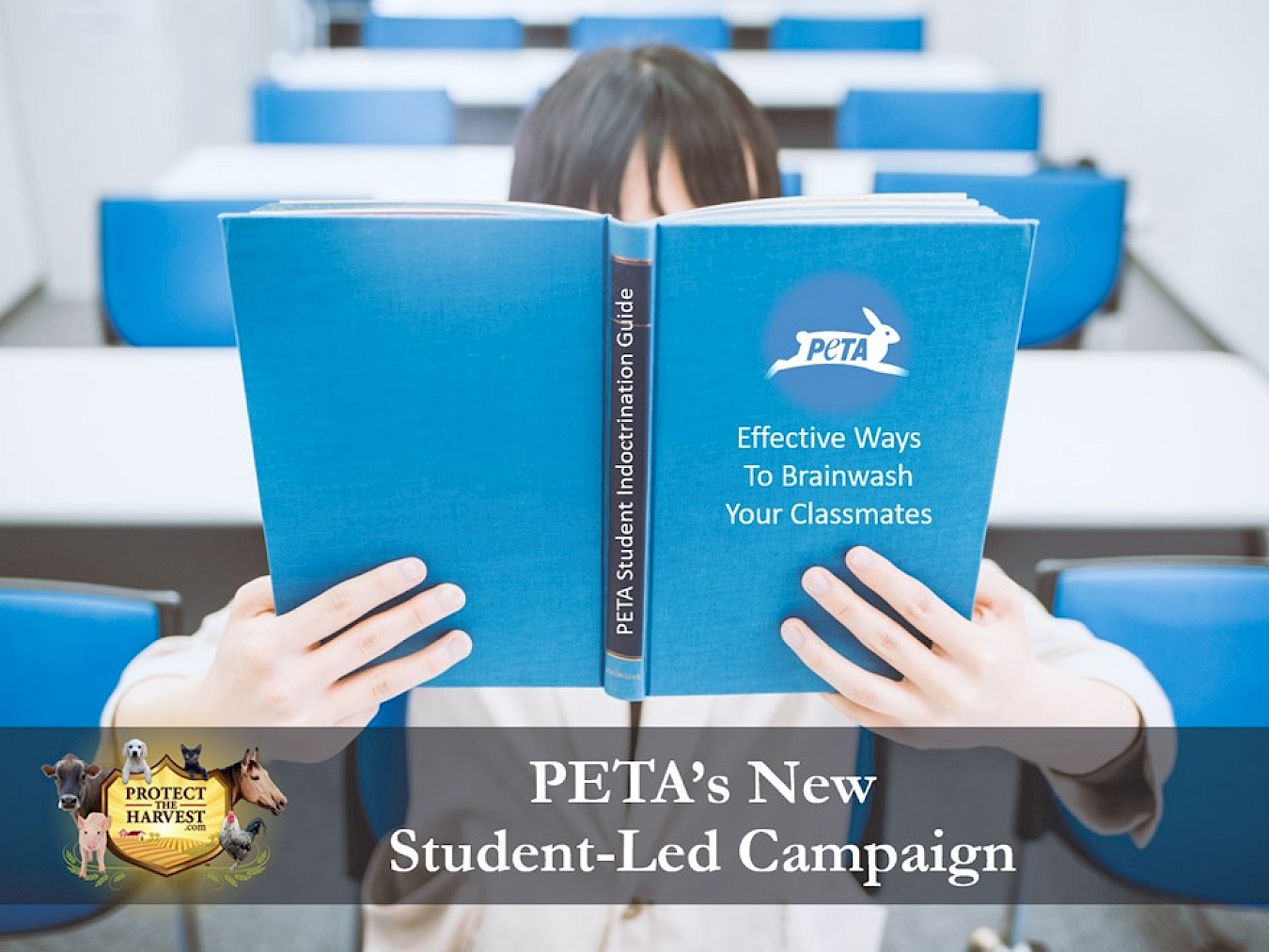 Earlier this year, PETA launched a new campaign to introduce and promote animal extremism to young people from middle school through college.

Students Opposing Speciesism (SOS) is a PETA-sanctioned “revolt” designed to be led and propagated by its young members aided by the larger animal extremist network.

SOS members are encouraged to bring animal extremist ideologies and influence to fellow students via handouts, in-person interactions, and social media activity. Besides calling for an overall vegan lifestyle, SOS upholds the ideology of “speciesism” which demands an end to all segments of the animal industries.

Students are encouraged to join a localized SOS hub based in a community or school. A full list of locations is provided on their website, as well as ways for potential members to start their own with the help of PETA.

Hub leaders, which are often students themselves, and all new members are sent a free welcome kit with an official SOS wristband and set of “End Speciesism” stickers. PETA staff and resources remain directly active in the campaign. All members are provided with a personal “advisor” to learn about activism and answer questions. They also directly provide materials for in-person events including leaflets, posters and more.

SOS throws a wide net to capture the 13 to 24-year-old demographic and are savvy about using the internet and social media to connect with their young audience. PETA staff hosts several online events coordinated with SOS leaders. These include watch parties and discussion forums that foster networking and awareness about news and topics within the animal extremist community.

SOS also has its own Instagram account to recruit and train new members. The account is live each week and features campaign news, different events and discussions hosted by PETA staff and other special guests. Participation in hubs includes online training sessions on different topics which include activism techniques and media engagement. Hub leaders are also strongly encouraged to host in-person and online events.

Indoctrination of Students About Speciesism

“Speciesism” is a buzzword used by organizations like PETA to push the abolishment of all animal industries. The organization defines it as “the human-held belief that all other animal species are inferior.” Under this banner, SOS encourages young people to take steps to eliminate animal products and industries from their lives.

Knowing their members are young, SOS draws upon the latest issues in the political and social climates to garner sympathy and concern for their cause. This is clearly illustrated on official SOS website equating “speciesism” as a “supremacist mindset.” Potential members are told that to be compassionate and reject cruelty, they won’t eat or use “exploited animals”.

Because this program is aimed at students, PETA is especially interested in targeted attacks at animal use in the education system. In fact, their program even offers “homework help” where PETA staff offers ideas, information, and classroom virtual presentations for animal extremist-based school projects.

Students are strongly encouraged to fight animal dissection at their schools. By contacting PETA staff, members can find ways to opt-out of dissection coursework and learn about ways to petition their school to end the practice entirely. SOS also provides a link to PETA’s “Dissection Kills” website where they offer leaflets and “humane alternatives.”

On the heels of anti-dissection, the SOS website and social media accounts spend a significant portion of posts dedicated to animal testing and research. This includes petitioning against the University of California-Davis to shut down its on-campus primate lab and calling for an end to the National Institutes of Health laboratory in Maryland. Repeatedly, PETA and other animal extremist organizations claim animal research is not beneficial for people or animals. As an SOS blog post says, “...animal experimentation is the epitome of speciesism.”

Saying animal experimentation is useless is not only incorrect, but it also overlooks how animals have and continue to benefit from the research. Bombarded with misinformation, young SOS members do not connect the dots with how animal research evolves veterinary medicine, animal nutrition, and biotechnology that beloved pets directly benefit from.

Some advances in veterinary medicine have coincided with animal research done for humans. These include artificial joints, transplants, cancer treatments, vaccines, and even pacemakers. Developing new equipment and technology, training veterinary students, and studying pet nutrition and ingredients also require extensive use of research animals. For these reasons and many more, the American Veterinary Medicine Association is strongly in support of animal research. Pet owners and animal lovers all know the importance of safe and effective veterinary treatment, but without research how will we continue that standard?

On the human side, many life-saving vaccines, procedures and devices are the direct result of animals testing. Common examples include organ transplants, insulin injections, meningitis vaccines and chemotherapy.

Animal extremists often argue models and technology offer better ways to conduct experiments that don’t require animals. However, there are many complex biological systems impossible to replicate. Consider studies involving genetics, response to drug treatment, neurology and the like. Before conducting human clinical trials, animal testing shows scientists the potential for effectiveness and if it is safe to take the next step in humans.

Researchers and scientists are heavily vested in animal welfare. There are even veterinarians and veterinary technicians who work with research animals on a full-time basis.
Animal Research is the most regulated animal industry, with every aspect of it being supervised and inspected, from before a research project begins until its completion. All of which must be detailed in a lab protocol prior to the research program being approved. Numerous ethics and regulation standards are involved with animal testing. Multiple agencies and regulatory bodies are directly involved to approve and monitor ongoing work involving animals.

By not offering full transparency to their impressionable younger members, SOS promotes attacks not only on animal research but also the life-saving remedies they provide animals and people.