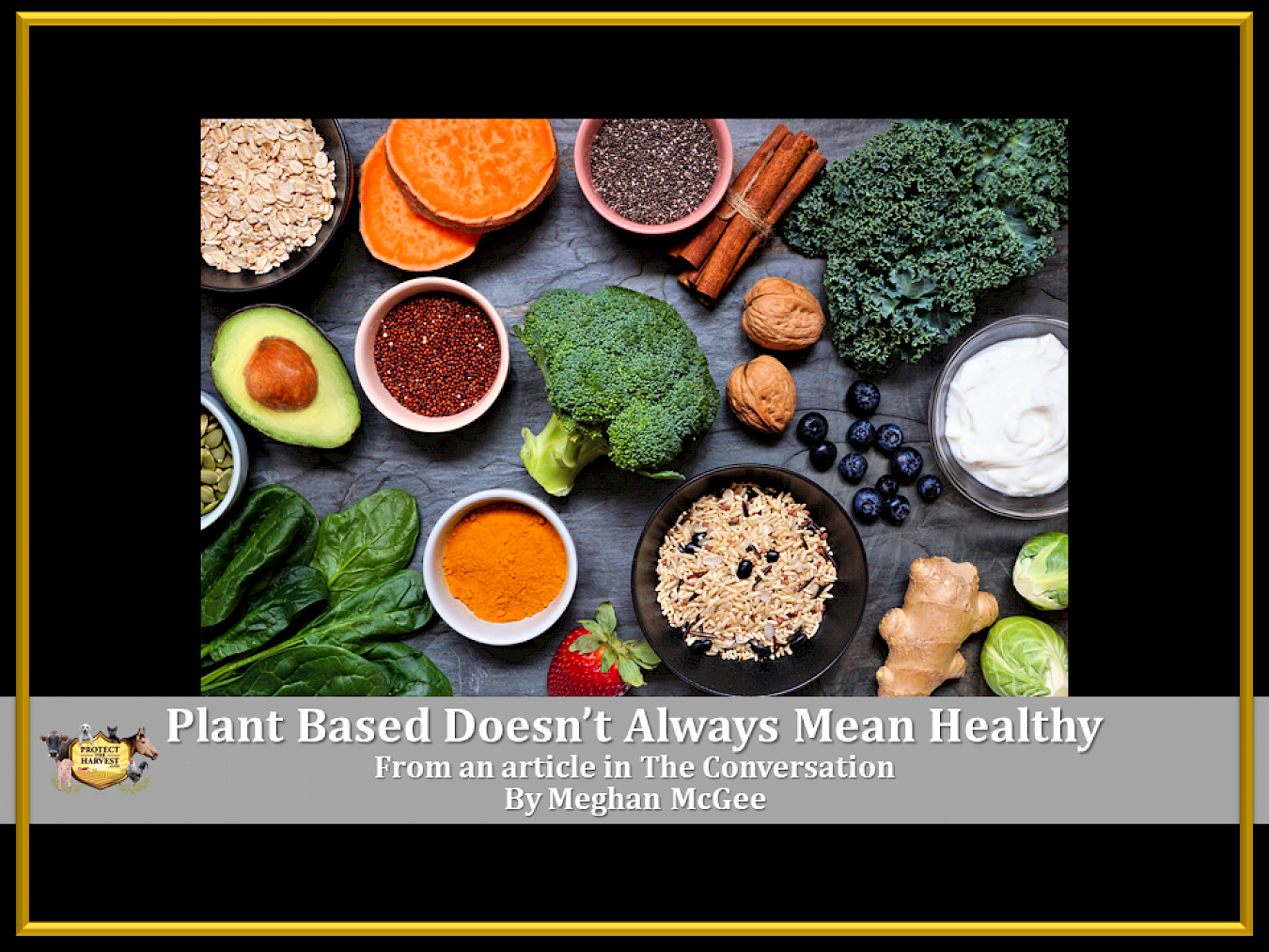 From an article in The Conversation by Meghan McGee

As we ring in the new year and people announce their resolutions and goals for 2022, many opt for getting healthy, cutting out drinking or starting a new hobby. Vegan magazines and organizations are pushing plant-based diets — calling it the “ultimate new year’s resolution.”

But plant-based meats are often high in sodium, ultra-processed and not any healthier than the meat they imitate. Meanwhile, nearly half of the consumers think they are more nutritious. So if your resolution is related to health, you may want to reconsider switching to a plant-based diet.

The Impossible Burger, for example, is an impressive meat-free mix of soy, potato proteins, coconut and sunflower oils. It even bleeds like the real thing. At the same time its calorie count and saturated fat levels mirror a McDonald’s quarter-pounder, and it has six times more sodium.

The global market for plant-based meat is projected to explode to US $85 billion in 2030. And grocery stores are taking note, featuring an array of burgers, sausages, nuggets, ground meat and seafood options all without any trace of animal products.

According to one study this year, the nutritional benefit of plant-based foods is minimal. Researchers from the Singapore Institute for Food and Biotechnology Innovation modeled the outcome of replacing bacon, chicken, beef burgers and ice cream with animal-free versions.

Diets that substituted animal products with the plant-based alternative were below the daily recommendations for vitamin B12, calcium, potassium, zinc and magnesium, and higher in sodium, sugar and saturated fat.

Animal sources like meat, milk and eggs are complete proteins, meaning they contain enough of the nine essential amino acids we must get from our diets every day. Plant-based foods like fruits, vegetables, nuts, seeds and grains often lack one or more of these amino acids and need to be eaten in combination.

Plant-based meat manufacturers argue their products contain similar amounts of protein that are comparable in quality to animal protein. But focusing on protein is too “simplistic,” says van Vliet. “Foods contain hundreds to thousands of compounds that are capable of impacting human metabolism and health.”

Van Vliet and colleagues compared 190 molecules in plant-based meat alternatives with grass-fed ground beef and found that 90% of them were different. Plant-based meat alternatives lacked certain amino acids and derivatives, like creatine, taurine and anserine, “which can all have an impact on our health and potentially brain function as well as muscle function,” he says.

Other metabolites like polyphenols and antioxidants were found in greater quantities or exclusively in plant-based meats. He sees plant and animal source foods as complementary in our diet, where some nutrients are better obtained from animal sources and others from plants.

“People opt for a plant-based burger for a variety of reasons,” says Rosie Schwartz, a Toronto-based consulting dietitian, “including reducing meat intake.” But she argues that consumers should rethink their reasoning if it’s because of health.

According to nutrition scientists and Canada’s Food Guide, plant-based is the recommended way we should be eating. Fill half your plate with vegetables and fruits, and the other half with whole grains and proteins.

But “plant-based” also refers to anything from meat to paint to pillowcases, as long as they were made mostly or completely of plants, according to the Merriam-Webster dictionary.

Just because it’s made from plants, doesn’t mean it’s healthy. “I do think it’s very confusing for the consumer,” says van Vliet. “It’s probably not the chicken, but everything else that comes with the chicken nugget that is probably detrimental to our health.”

The Future of Plant-based Meats

Up until this point, plant-based meat companies focused on the taste, texture and appearance of its products. These companies targeted meat eaters by creating plant-based marvels meant to look, taste and feel like the real thing.

Impossible Foods, the creator of the Impossible Burger, says 90 per cent of their customers are still meat eaters. It isn’t in the business of converting salad and tempeh-eating veggie lovers into fake meat consumers.

“The whole mission of Impossible Foods is to create plant-based products that compete directly against animal meat,” said Esther Cohn, communications manager at Impossible Foods. “If you eat five beef burgers a week, we want you to swap, even just try swapping one out for an Impossible Burger.”

With a booming market and new animal-free proteins made from cells in a lab or fungi in fermentation tanks, the options are endless. Can they be adapted to be healthier as well? We’ll have to wait and see.