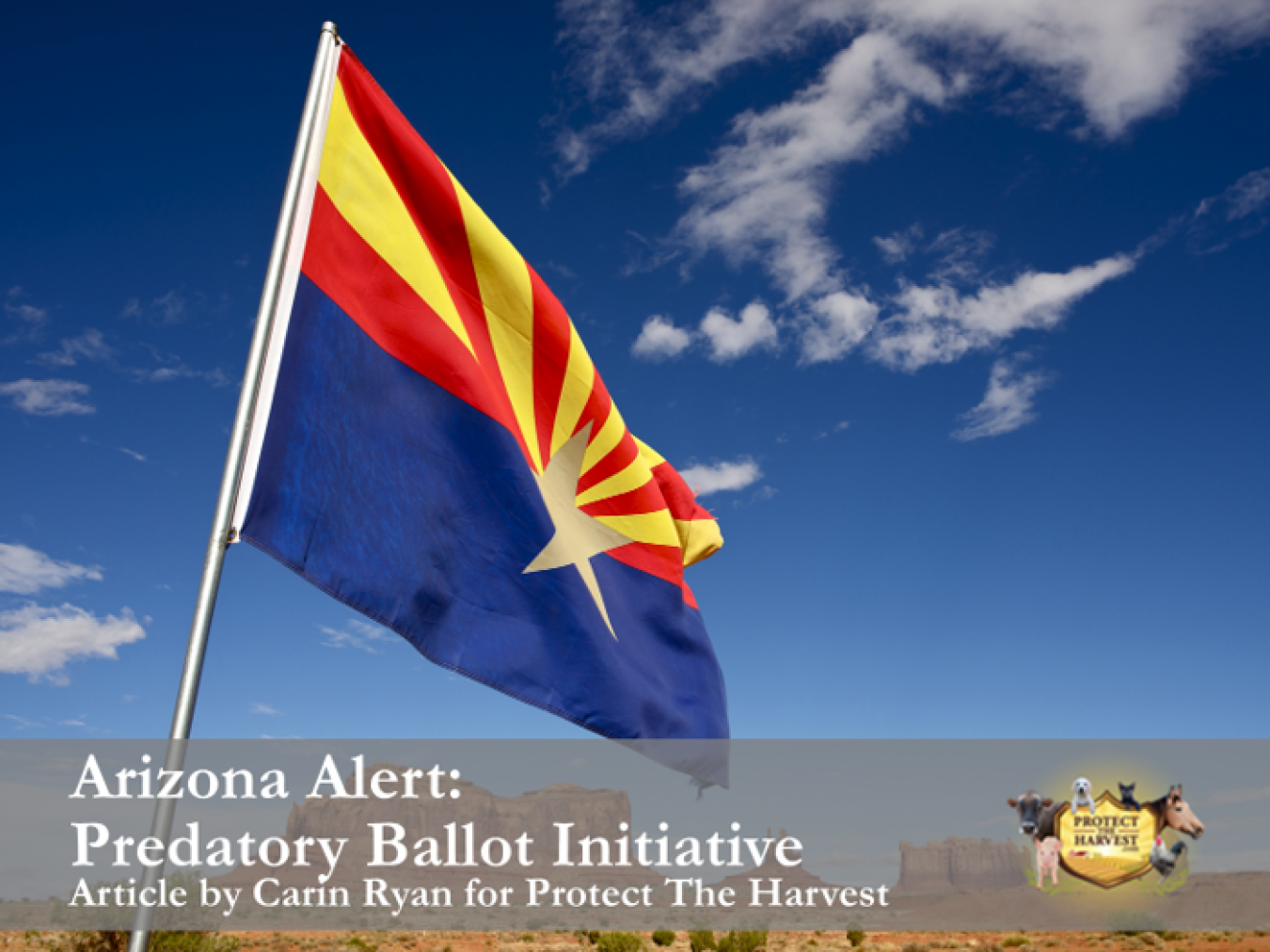 After success in pushing regulations in California and other states, animal extremist organizations are testing the waters in Arizona. Earlier this year, a group sponsored by World Animal Protection called “Arizonans Against Farm Animal Cruelty” filed a petition to place a measure on the upcoming 2022 Arizona ballot to “prevent animal cruelty by phasing out extreme methods of farm animal confinement.”

The proposing group, Arizonans Against Farm Animal Cruelty, has no digital footprint, no website, no Facebook page, nothing that could be found. After a quick look into the World Animal Protection’s leadership and nonprofit profile, several red flags are raised immediately; primarily that they are based in New York City. Why would a non-governmental organization from the other side of the country file a petition to affect animal welfare in a different state? The simple answer is that they are checking with voters to see if the time is right to drop the hammer on food production and animal agriculture in yet another state.

This ballot initiative is currently in the signature gathering phase. It does not have an official identification number, just the title, “Prevent Cruelty to Farm Animals.” The petitioners need a little over 237,000 registered Arizona voters to sign the petition to have it placed on the November 2022 ballot. Arizonians will likely see these signature gatherers outside grocery stores and big box stores. Usually, the non-governmental organization, like World Animal Protection, will hire workers through a temporary staffing agency to do this work as well as host targeted meetings with attendees who sympathize with their efforts.

The Domino Effect - Protect The Harvest Warned About is Happening

It is clear World Animal Protection didn’t have to work hard to come up with the verbiage for this ballot initiative. It is hauntingly similar to ballot initiatives that have been passed in states like California and Massachusetts. The collateral damage felt in those states is evident and will be more obvious in 2022 as they go into full effect. After the passing of Prop 2, Prop 12, and Mass Question 3, the cost of animal protein sources have increased for all consumers. With the new regulation deadlines looming, there is great concern that there will be shortages of eggs and pork in California and Massachuttes.

The price of eggs has certainly doubled since Propositions 2 and 12 affected food production in California. This harmful legislation set new standards for cage sizes and dismissed long used, scientifically backed animal husbandry practices which had kept animals safe and healthy for years preceding this unnecessary intervention.

This ballot initiative would completely end the use of farrowing crates in the state of Arizona along with the importation of pork from states that use farrowing crates.

Farrowing crates are used during the last few days of pig gestation and after the sow gives birth. The crates are used to restrict the area a sow has to reduce piglet injuries during and after birth. Due to a sow’s size, they can easily injury or kill a piglet by laying on them. The crates also allow the farmer to aid in the birthing process if necessary. These well engineered stalls allow the sow to stand, lay down, and consume food and water without crushing her piglets as they adjust to life outside the womb. This clean environment also allows for their handlers to assist in farrowing just like doctors, nurses and midwives help human mothers and babies perform safe and healthy births. Without this simple and short intervention, piglet mortality skyrockets and razor thin operating budgets are no longer feasible under these regulations.

The Arizona petition does exempt limited use of farrowing crates in very specific cases including youth livestock exhibitions like county and state fairs. The exemption allows youth livestock exhibitors to utilize farrowing crates for sows and piglets within a few days of birth. The fact that they call these instances out specifically is concerning. All it would take is a change in rulemaking to have these exemptions removed from the list of acceptable practices. Arizona already has animal welfare laws in place prohibiting animal cruelty, so why more regulations and why now?

As our world’s population has grown and modernized, we have become less reliant on harvesting wildlife for food and more reliant on humanely raised livestock. This transition has made poultry (chicken) a popular protein source across our world. Poultry has offered palatability and a diverse product range while being budget friendly. As demand increased, poultry producers adapted and created best practices to keep their animals safe and healthy before harvest. These practices have been researched extensively by veterinarians and land-grant universities; however, animal extremists think they know what is best for the animals. This ballot initiative will change how chickens are housed not only by Arizona farmers, but also by those selling poultry into the state. This change is not to do what is best for the animal, instead it is incrementalism to put an end to the poultry industry.

Raising healthy animals to provide affordable animal protein is the goal of the American farmer. They follow best practices for each species that are extensively researched by veterinarians. The problem is that these NGO animal extremist groups are not concerned with providing American’s affordable food or with the health of the animals. They are more concerned about ending animal agriculture, an industry that they see as a type of slavery. Overall, these animal extremist groups admit their end goal is to eliminate animal ownership and consumption of animal-based proteins. The vegan lifestyle for the global population is the goal. Legislation and ballot initiatives such as these proposed in Arizona and passed in California and Massachusetts are the method by which they will continue to push forward.

As Protect The Harvest highlighted in an article regarding food elitism, the push toward a vegan diet has little to no impact on middle and higher income households. When the average family faces doubling prices at the supermarket complaints will be made at the dinner table, but compensation for these price increases can be fixed by cutting out luxury expenses (vacations, eating out). Fixed and low-income households face a more concerning dilemma. They may find themselves forced to decide between a dozen eggs for $4.00 a dozen or two dozen packs of instant noodles for the same price. Eggs are a beneficial protein that check a lot of the nutrient boxes children need to grow and adults need to maintain health. While instant noodles have a place in diets as an occasional item, their low cost is tempting but high sodium, nonproductive calories, and low protein, collectively, are not beneficial for sustaining healthy families and growing children. This puts an already struggling group of people at an even higher disadvantage as they have less to spend on the ever-increasing food prices.

The proposed Arizona legislation is purposefully vague and palatable. When these NGOs are checking voters’ temperatures, they’ve found it best to appeal to the center of the political spectrum then double down later as they did in California. Prop 2 was passed in 2008, introducing the idea of “cage free.” Before Prop 2 was fully implemented, Prop 12 was pushed out with more restrictions. California Prop 12 passed in 2018 and set enforceable limits that are to go into effect in 2022. During that 10 year period between the two ballot initiatives, the NGO’s reaped benefits in the way of increased donations and support. It’s interesting to note that the top three individual cash donors in support of California’s Prop 12 were not residents of California, but Massachusetts and Texas. Once again, an example of nonresidents affecting costly regulatory change in states which they only have a political interest to forward a global agenda. It is also interesting to note that Prop 12 was registered in California by the HSUS affiliated wife of a television producer from Beverly Hills. This person is from the elite class, insulated from the impact of rising food prices and the cost of affordable protein.

While the swell of these damaging propositions seems to be overwhelming, agriculture finds hope and encouragement in forward thinking states like Maine. Voters recognized this important piece of agriculture and consumer friendly legislation giving residents a “Right to Food.” This constitutional amendment added to Maine residents’ Section 1 “natural, inherent and inalienable rights.” The passing of this proposition was an overwhelming win for agriculture. The Maine constitutional amendment states in part:

All individuals have a natural, inherent and unalienable right to food, including the right to save and exchange seeds and the right to grow, raise, harvest, produce and consume the food of their own choosing for their own nourishment, sustenance, bodily health and well-being.

The specificity of this verbiage is concise, but it is also alarming from the aspect of its necessity. It seems obvious that access to and choice of food is inherent to free citizens of the United States but when Americans’ Constitutional rights are under attack, its citizens are compelled to spell out in detail what is included in “certain inalienable rights, that among these are, Life, Liberty and the pursuit of Happiness.” It was not surprising to find the opposition to this measure included many of the usual and concerning extremist groups, some that are promoting the proposed Arizona legislation, none of which are residents of or corporations in the states of Arizona and Maine.

Non-governmental organizations like World Animal Protection (WAP) have no intention to slow in their efforts to restrict animal agriculture through more regulations impacting production costs. The secretary of WAP, author of the Arizona proposed ballot initiative, has appointed himself the moniker of “pig protector.” It’s not hard to believe that this will be their first of many insertions into nonresident state politics using this as a template and steam rolling ahead with their agenda.

Protect The Harvest looks to support agriculture organizations showing leadership like in Maine, Missouri, and North Dakota, all of which have protected their residents’ right to food, by getting ahead of harmful legislation, and asserting their inalienable rights. Animal extremists have no right to infringe on your choices in the garden, on the farm, or at your dinner table.

Is your state next?