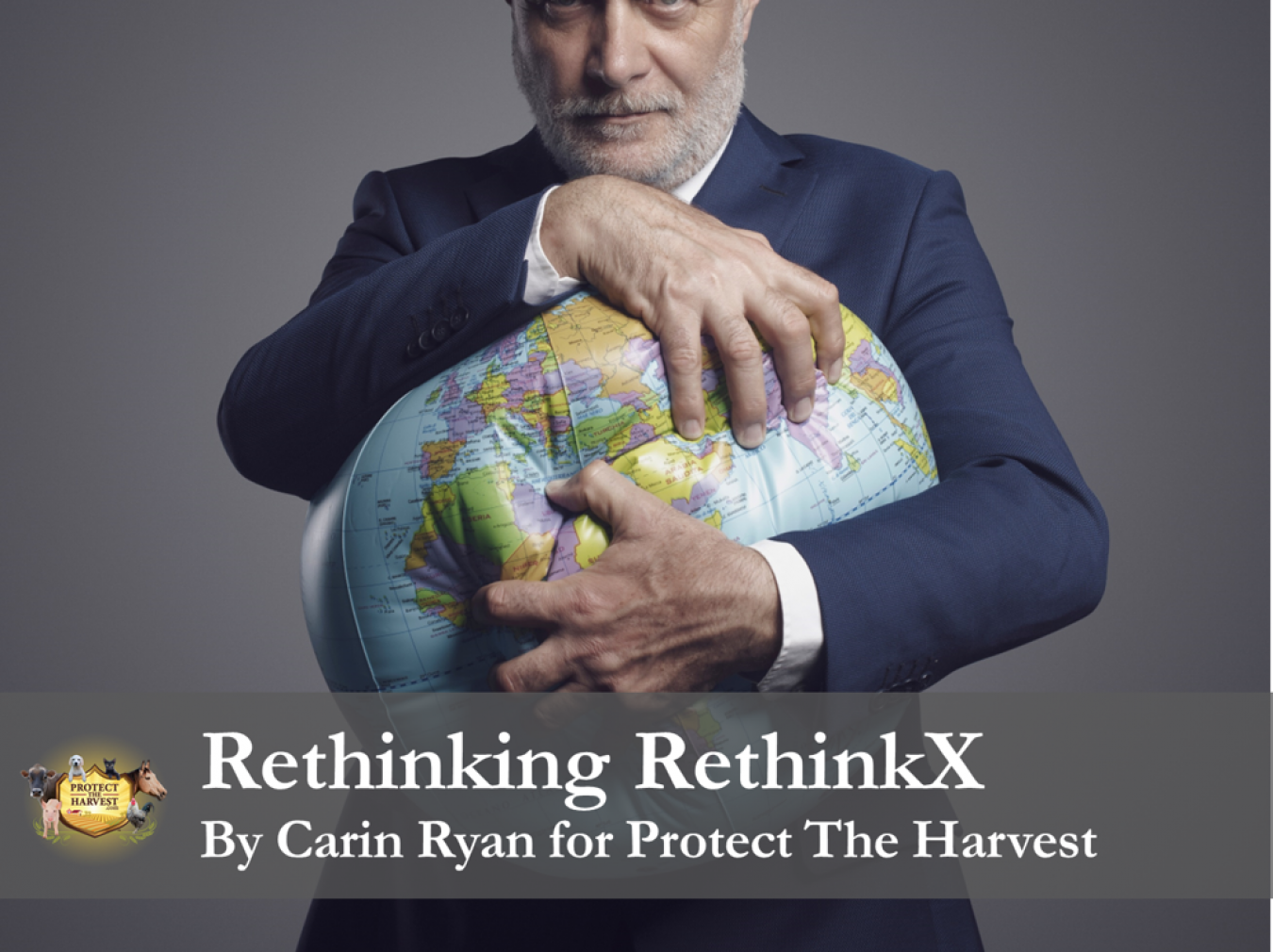 While researching United Nations-related issues, Protect The Harvest came across a group known as RethinkX. On the surface, this group doesn’t seem to be directly involved in agriculture. After a little digging, we found that this group is influencing policy changes and public perception of our food systems.

Why is this group one to watch? The founders and board members of RethinkX claim to be regular speakers at United Nations-sponsored events and are advising leaders from across the globe on policies that have a direct impact on you.

RethinkX describes itself as:

“…an independent think tank that analyzes and forecasts the speed and scale of technology-driven disruption and its implications across society. We produce impartial, data-driven analyses that identify pivotal choices to be made by investors, business, policy, and civic leaders.”

Protect The Harvest takes specific offense to the statement that their analyses and statements are impartial based on what we have found in their materials.

When you visit their website, it’s hard to miss their disclaimer that opens with:

“Any findings, predictions, inferences, implications, judgments, beliefs, opinions, recommendations, suggestions, and similar matters on RethinkX.com and RethinkDisruption.com (a publication of RethinkX), including reports, articles, social media posts, and blog posts (herein referred to as Content) are views and statements of opinion by the authors, and are not statements of fact and do not necessarily reflect the official policy or position of RethinkX.”

This disclaimer states that the content they are distributing is in fact opinion of the authors, not statements of fact. This isn’t science-based, and that is only the beginning of why we find this group concerning. They appear to have the same agenda as animal extremists and are promoting a fake-meat-based future that is devoid of fossil fuels and personal automobiles.

In November 2019, Seba and Tubb wrote an opinion piece in the Boston Globe entitled, “Disrupting the Cow,” which had the subtitle, “A new model of food production will massively disrupt traditional livestock and dairy industries.”

Seba and Tubb suggest, “Extraordinary advances in precision biology mean we can now program micro-organisms to produce almost any protein using a process we call precision fermentation or PF.” Precision fermentation is the process by which meat-like foods are made by brands like Impossible Foods and Beyond Meat.

The writers’ opinions forcefully state, “By 2035, 60% of the land currently used for livestock and feed production will be freed for other uses. This 485 million acres equates to 13 times the size of Iowa, an area almost the size of the Louisiana Purchase. If all this freed land were dedicated to reforestation and efforts were made to utilize tree species and planting techniques intended to maximize carbon sequestration, all current sources of U.S. greenhouse gas emissions could be fully offset by 2035.”

There seems to be no reference to how this land will be acquired or what happens to all the jobs in these agriculture sectors. Their end goal is to be in control of the food supply and for global citizens to own nothing and be happy.

Most of the article discusses how countries will have to jump on the bandwagon of fake meats due to a plethora of reasons. At the end of the article the authors state, “If the United States resists this change, it risks locking in an expensive and obsolete market...”

The Boston Globe opinion piece seems to be nothing more than promotional material for RethinkX’s report titled “Rethinking Food and Agriculture 2020-2030 – The Second Domestication of Plants and Animals, the Disruption of the Cow, and the collapse of Industrial Livestock Farming.” It is no surprise that Seba and Tubb also coauthored that report.

Tony Seba, the co-founder of RethinkX, has listed in his bio on RethinkX’s website that he spoke at COP21 in 2015. The title of that session was: Mobilising Non-State Actors for the Post COP21 Agenda. He and four other panel members discussed how to get businesses and organizations involved in “solutions to climate change”.

James Arbib is the other co-founder of RethinkX and just happens to be an Advisory Board Member of EAT. EAT is the group that put together the EAT-Lancet report that we have discussed previously. Arbib is also the co-author of a RethinkX report called “Rethinking Transportation 2020-2030: The Disruption of Transportation and the Collapse of the Internal-Combustion Vehicle and Oil Industries.” The other co-author is of course Tony Seba, which is no surprise. This report discusses the end of personal use vehicles and pushes the idea of all people ride-sharing electric vehicles. We wonder if they have thought about how a farmer goes about ride-sharing a tractor?

How They Plan to Rethink

The disruptions this group is pushing for seem to have a major issue regarding time constraints. All of their reports are focused on the time frame between 2020 to 2030. and look to end animal agriculture and fossil fuel use worldwide.

In the Boston Globe article, the authors mention how to make this major disruption happen at a pace they’re satisfied with; they willfully admit that governments will be their biggest stumbling block. They state, “Meanwhile, governments and states can help or hinder the incumbent and disruptive industries through regulation, tax, or subsidy, depending on how beneficial they are to the economy, the environment, and society. Lobby and interest groups will also play an important role in influencing them.”

Without a doubt, globalists see conventional agriculture, specifically animal proteins, as a big problem. Most consumers won’t willfully give up their steak or their pork chop. So how do they force this change? The answer is pressure on landowners to comply with pseudoscientific regulations and pricing consumers out of the market.

With the experience of supply chain disruptions during the recent pandemic, citizens worldwide were awakened to the importance of sourcing their productive calories much closer to home. The desire for cheap and easy food was replaced by home gardens, meat producers selling directly to their consumers, and the rebirth of mid-sized agriculture operations.

The United Nations is not shy about its objectives for a global government, and controlling food is a major component of the power they seek. They’d like to take food one step further so that your pork chop is made in a lab and your broccoli is something from a science fiction movie.

If animals used for human consumption are eliminated “for the sake of the environment,” there’s no way for an individual to independently raise and harvest productive calories.

The future of our country and our world is often difficult to wrap our heads around. Our society has many idealists that are pushing policy changes based on non-scientific “reports” and agendas.

With so many different action plans being highlighted on mainstream media and social media, how is one to know which are facts and which are fairy tails? We have to stay informed and look below the surface on every issue. Doing so will ensure that we are not pushed farther toward the globalist agenda that ends our way of life and destroys animal agriculture in America.