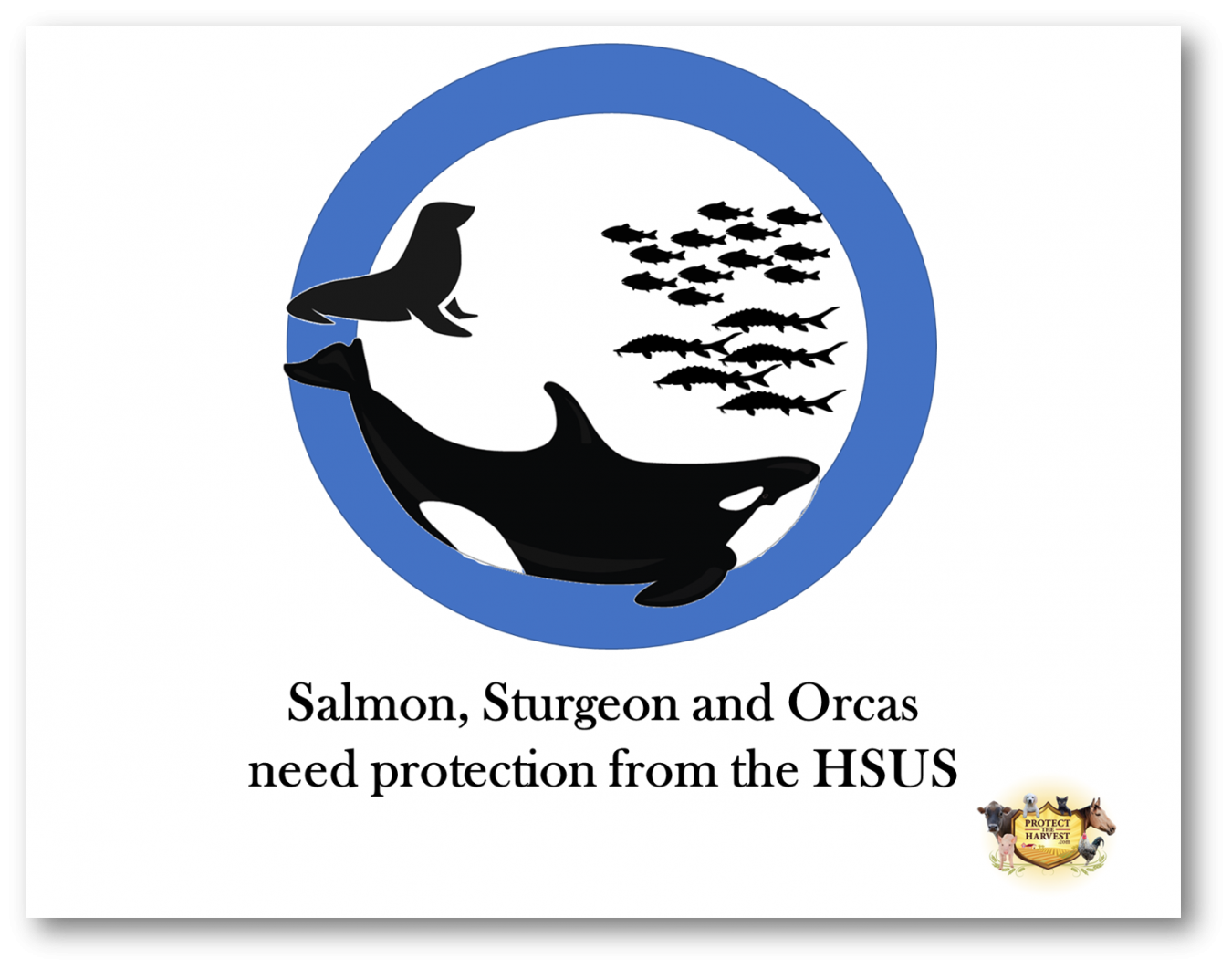 SALMON, STURGEON AND ORCAS NEED PROTECTION FROM THE HSUS

The HSUS Thinks They Know Better Than Wildlife Biologists

Every year thousands of Columbia River salmon migrate between the Columbia River Basin and the Pacific Ocean. This journey to and from the Pacific Ocean is integral to their life cycle. Amongst other obstacles they face during their lifetime, predation by sea lions has become increasingly devastating. The salmon must climb the Bonneville Dam ladder in order to continue their trek to their home streams. Unfortunately, sea lions have learned to occupy the dam in large numbers in the hopes of a plentiful and easy meal.

Over the past decade, biologists from the Department of Fish and Wildlife in Oregon and Washington have studied the effect of the sea lion’s predation on the salmon population. They have concluded that their population decline is in dire need of intervention. Columbia River salmon are on the Endangered Species List and the overwhelming consumption of them by the sea lions is threatening their ever-dwindling population. Sea lions have also begun to venture further into the state as they follow the Columbia to the Willamette River in Oregon. There, they have decimated the steelhead population. A senior policy analyst, Shaun Clements, with the Dept. of Fish and Wildlife said “if left unchecked, the sea lions could cause the extinction of steelhead runs on all four rivers branching off the Willamette”. One study done by Patricia Madson et al of the U.S. Army Corps of Engineers explains that in 2016 the total number of salmon that passed through the run was 154,074. The sea lions were found to have consumed 9,525 adult salmonids which equates to 5.8% of the salmon between Jan. 1and May 31, 2016. This is the highest percentage of salmon consumed by sea lions ever recorded at the Bonneville Dam since monitoring began.

The Department of Fish and Wildlife has tried to relocate the sea lions. This method has proved to be completely ineffective because the sea lions simply come back. They have also tried hazing techniques in order to drive them away from the dam. That method has not worked either. Therefore, in an effort to help preserve the salmon population they have recommended culling a small number of sea lions as a final option.

U.S. Representatives Jaime Herrera Beutler of Washington (Rep.) and Kurt Schrader of Oregon (Dem.) have introduced a bipartisan supported bill this year (2017), that is intended to protect threatened salmon species in the Columbia River basin. It’s important to note that Rep. Shrader is also a livestock veterinarian. He keenly understands the issue, the natural balance that's been upset with current federal laws and the steps needed to assure the future of Columbia-basin salmon, steelhead, and sturgeon. Getting permission to cull sea lions requires a permit from the National Oceanic and Atmospheric Association (NOAA). This is no easy task as it puts federal laws to protect the fish and marine mammals at odds. Their bill, H.R. 2083, would authorize the lethal taking of no more than 100 sea lions during the duration of the permit. Since becoming a protected species in 1972, sea lion population has grown from a mere 10,000 animals to over 300,000. The number they are requesting to cull is only 0.00033% of the sea lion’s population, and that alone would save thousands of salmon. The duration of the permit is only one year and can be renewed yearly by the Secretary.

HSUS Lawsuits are Harming Salmon Populations and the Ecosystem

The Humane Society of the United States filed lawsuits in 2008 and 2012 in the hopes to impede the removal of the sea lions. They have completely disregarded the far-reaching consequences of the salmon’s population decline. Salmon are considered a keystone species, which means that their ecosystem, and the other species within it, rely largely on them. The salmon are an important food source for carnivores like bears, large birds of prey and orcas (also endangered). One study done by Brandon Chasco et al of Oregon State University point to the sea lion’s rebounded population as one reason why the conservation efforts to help killer whales has been ineffective. The killer whales are competing with the large sea lion population for their food source. This is only further complicated when animal rights groups like the HSUS insert themselves into the equation.

Plainly, the HSUS is Choosing to Save Some Sea Lions at the Expense of Many Other Species’ Well-being

Plainly, the HSUS is choosing to save some sea lions at the expense of many other species’ well-being. The legal obstruction of this approved salmon conservation method is just another way that the HSUS is using their donation money to push their agenda rather than help actual animals in need. HSUS receives millions of dollars in donations to “protect” animals, yet here is another instance where they are using that money for legal fees, staffing, and marketing campaigns rather than for the good of many species - endangered ones at that.

That doesn’t seem very humane to us.