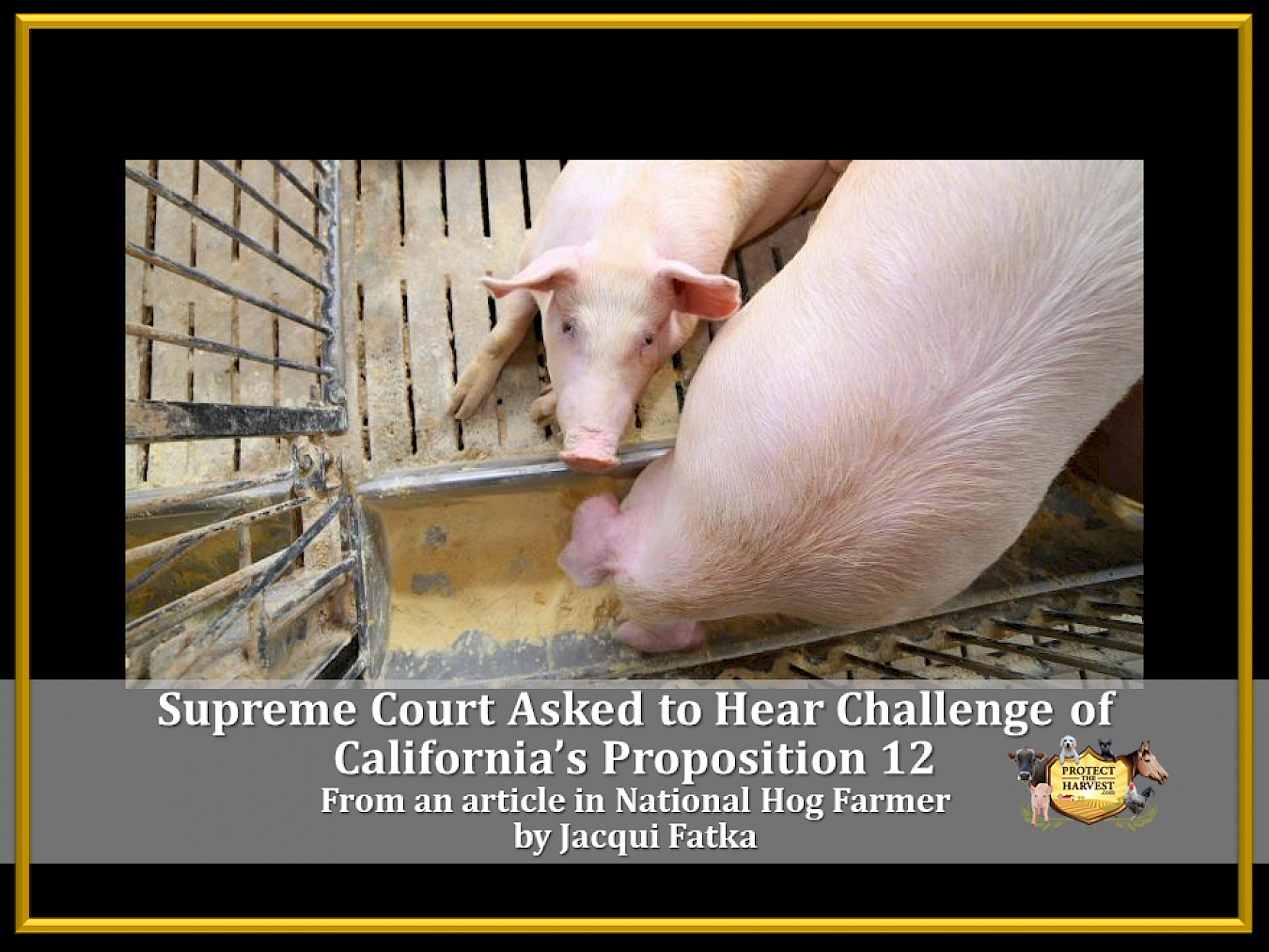 From an article in National Hog Farmer by Jacqui Fatka

Proposition 12 bans the sale of pork in California unless the sow from which it was derived was housed with space allowances that almost no farms satisfy. Californians account for 13% of the nation’s pork consumption yet import 99.87% of pork consumed. The massive costs of complying with Proposition 12 fall almost exclusively on out-of-state farmers, according to a court filing from the National Pork Producers Council and the American Farm Bureau Federation petitioning the U.S. Supreme Court to hear their case against California’s Proposition 12.

The appeal to the high court comes after the U.S. Court of Appeals for the 9th Circuit in July upheld a lower court ruling against the NPPC-AFBF case. The appeals court found despite the organizations plausibly alleging that Prop. 12 “will have dramatic upstream effects and require pervasive changes to the pork industry nationwide,” 9th Circuit precedent won’t allow the case to continue. That precedent, however, runs counter to numerous Supreme Court decisions and is in conflict with nearly every other federal circuit court, the organizations state.

“We’re asking the Supreme Court to consider the constitutionality of one state imposing regulations that reach far outside its borders and stifle interstate and international commerce,” says NPPC President Jen Sorenson. “In this case, arbitrary animal housing standards that lack any scientific, technical or agricultural basis and that will only inflict harm on U.S. hog farmers.”

Generally, the Commerce Clause grants Congress the power to regulate trade among the states and restricts states from regulating commerce outside their borders, except for matters related to public health and safety.

“Supporters of Proposition 12 claimed it would improve animal welfare and food safety. The law fails to address either of those issues,” says AFBF President Zippy Duvall. “Farmers know the best way to care for their animals. This law takes away the flexibility to ensure hogs are raised in a safe environment while driving up the cost of providing food for America’s families.”

Duvall adds small family farms well beyond California’s borders will be hit hardest as they are forced to make expensive and unnecessary changes to their operations. “This will lead to more consolidation in the pork industry and higher prices at the grocery store, meaning every family in America will ultimately pay the price for Prop. 12,” he says.

The California Department of Food and Agriculture, which is still writing the implementing regulations for Prop. 12, admitted the initiative will have no effect on food safety and actually will increase the mortality rate for sows subject to it.

Beginning Jan. 1, 2022, Prop. 12 will prohibit the sale of pork from sows raised in pens that do not comply with California’s highly prescriptive housing standards of 24 square feet of space and conditions that allow the sow to turn around freely without touching the enclosure. It applies to any uncooked pork sold in the state, whether produced there or outside its borders. Nearly all pork currently produced in the United States fails to meet California’s arbitrary standards.

To continue selling pork to the 40 million consumers who live in California, which represents about 15% of the U.S. pork market, pork producers would need to switch to alternative sow housing systems. Industry estimates for converting sow barns or building new ones to meet the Prop. 12 standards are in the billions of dollars, with consumers bearing the ultimate cost through higher pork prices.

Across the country, 65,000 farmers raise 125 million hogs per year with gross sales of $26 billion. The pork production process is segmented, the court document notes. “The production chain starts on a sow farm—most located in the Midwest or North Carolina—where sows give birth to piglets. Production then involves multiple steps, transactions and actors before cuts of pork from a market hog reach consumers,” the groups write. “It also makes it impossible to trace every cut of pork back to a particular sow housed in a particular way.”

Petitioners allege that compliance will increase production costs by over $13 dollars per pig, a 9.2% cost increase at the farm level. Increased production costs will flow through to every market hog born to every sow raised in compliance with Proposition 12, and to every cut of meat from each of those market hogs—regardless of where that meat is sold. An estimated 87% of pork is sold outside of California.