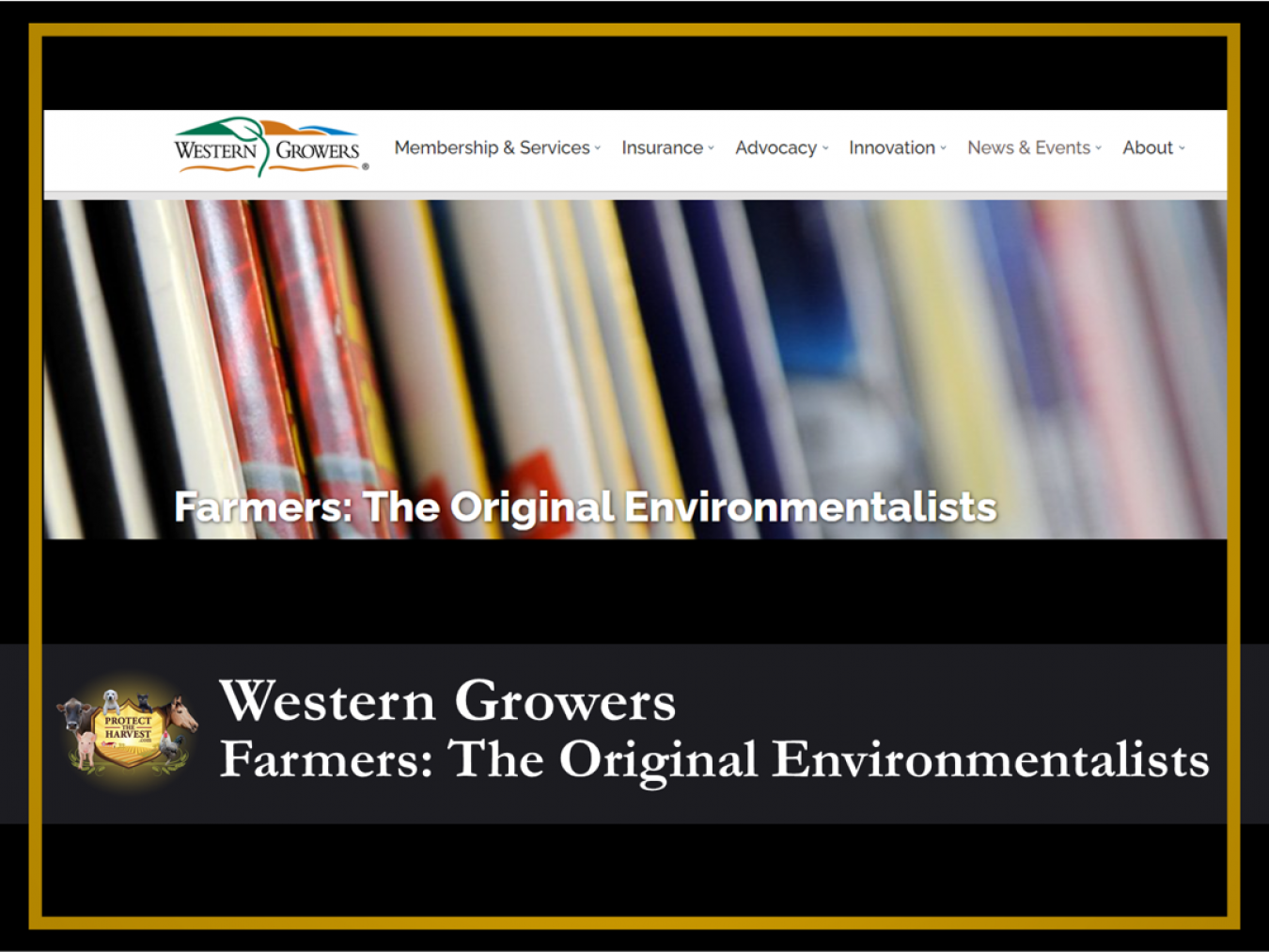 It is a like a sub-plot out of the Netflix television series, Stranger Things, which follows the residents of Hawkins as they battle supernatural forces from the Upside Down, an alternate dimension linked together in a hive mind controlled by the Mind Flayer. In a stranger-than-fiction, real-life drama that is playing out across the country, farmers have inexplicably been cast as Demogorgans, the humanoid predators sent by the Mind Flayer as part of the superorganism’s quest to invade and destroy the Earth.

With increasing intention and intensity, farmers are being vilified by many—including those in the environmental, scientific and policymaking communities—as enemies of our planet, as indiscriminate polluters and wasters of our air, soil and water resources.

However, for anyone who has ever walked a field with a multi-generational family farmer and seen the pride that comes from knowing they are leaving a healthier environment to their children, nothing could be further from the truth.

The fact is: Farmers are the original environmentalists. Farmers have been dedicated land stewards, protecting our open spaces and passing productive ground from one generation to the next, since before the environment was a cause. Farmers take very seriously their responsibility to preserve the natural resources that have been entrusted to their care.

From a purely financial perspective, farmers have an incentive to preserve and improve the soil, water and air that both sustains and increases their livelihood. Businesses that fail to protect their investments do not remain in business long. But the story is much deeper than profit and loss statements.

Simply put: It is in their DNA. Thomas Jefferson recognized this fact, once characterizing farmers as the “chosen people of God… whose breasts He has made His peculiar deposit for substantial and genuine virtue.”

In other words, Jefferson understood that there is a particular ethos ingrained in farmers—based on a shared work ethic, a collective commitment to right conduct and an unyielding sense of stewardship—that, if widely adopted, would ensure the long-term prosperity and happiness of the American people.

While survey after survey confirms that public support for farmers remains resolute, the early confidence expressed by Jefferson seems to have eroded among today’s policymakers. In California, and elsewhere in the U.S., countless legislative and regulatory actions have been taken to limit the freedom of farmers to operate, ranging from reductions in water deliveries to onerous air and water quality mandates to the elimination of crop protection tools.

Perhaps our policymakers would have a different perspective if they spent some time on an actual family farm, if they got to know any one of the thousands of family farmers in California, Arizona, Colorado or New Mexico [or any other state] dedicated to maintaining a sustainable balance between feeding our country and preserving our natural resources.

Perhaps our policymakers would have a different perspective if they ever had a chance to meet the late Marvin Meyers, who passed away in November 2019.

One of California’s biggest almond growers, Meyers was widely recognized for his visionary approach to environmental stewardship, which culminated in the development of the Meyers Water Bank and Wildlife Project near the town of Mendota.

Part working ranch, part groundwater storage facility, part wildlife habitat, the project is also a living laboratory for students to learn about the importance of water to agriculture and the role conservation plays in preserving the future of agriculture.

Perhaps our policymakers would have a different perspective if they were to ever pay a visit to Bowles Farming Company, the Los Banos-based sesquicentennial family farm led by sixth-generation farmer, Cannon Michael.

In inheriting the Bowles Farming Company legacy, Michael has also inherited an appreciation for sustainability, and strives to build his family farm into a model of sustainable agriculture. “Our continued progress is inseparable from the continued health and availability of our natural resources,” he notes.

In practice, the Bowles Farming Company seeks out the best available technology to increase water efficiencies and decrease its carbon footprint, while improving its on-farm wildlife habitat. To grow its habitat footprint, the Bowles Farming Company works diligently to preserve historical ecosystems, restore degraded habitats and improve the ecological functionality of working lands.

One crowning jewel of this effort is the Pick Anderson Riparian Restoration project, which is currently developing habitat for migratory birds and pollinators along an abandoned four-mile stretch of land adjacent to their fields. The Bowles Farming Company also works with conservation partners to actively manage its wetland habitats for the benefit of waterfowl and other migratory birds.

Perhaps our policymakers would have a different perspective if they were to ever set foot on Terranova Ranch, the Helm-based operation managed by the purpose-driven farmer Don Cameron.

At Terranova Ranch, Cameron has pioneered the concept of on-farm water recharge in California. For the past 25 years, Terranova Ranch has been working to recharge its aquifer, the main source of the farm’s irrigation water. In 2011, Cameron landed on a novel solution. He worked with UC Davis researchers on an experiment in which flood water was applied to his farm fields as a means of capturing and storing excess water during the off-season, which would otherwise run out wasted to the ocean.

The results were promising, and the following year Terranova Ranch began a collaboration with the Kings River Conservation District to build additional infrastructure required for the on-farm recharge project. While work is still underway, at full capacity, the project will be able to recharge up to 1,000 acre feet of floodwater per day, and will help the region meet its sustainable groundwater management goals.

Perhaps our policymakers would have a different perspective if they were ever to spend time at Braga Ranch, the heritage of founder Sebastian Braga. Today, the third generation runs the Soledad-based family farm, headed by Rodney Braga.

Braga Ranch operates by a simple motto: “Sustainable agriculture is the foundation of our operations.”

With their sustainability program—which focuses on water, soil, energy and air—Braga Ranch aims to reduce waste and increase efficiency. Through practices such as drip irrigation, crop rotation, cover crops and conservation tillage, Braga Ranch conserves water and maintains air quality standards while nurturing the healthy soils that will provide for the farm for generations to come.

Perhaps our policymakers would have a different perspective if they ever traveled up the road to the Salinas-based D’Arrigo Bros. of California, where John D’Arrigo carries on the Andy Boy legacy.

Driven by the core value of conserving energy and protecting natural resources, D’Arrigo Bros. of California consolidated and centralized its cooling and loading facility to minimize energy and fuel use. In designing its new facility, D’Arrigo Bros. of California considered the distance product traveled from the field to the facility, incorporated energy-efficient materials, equipment and lighting into the construction of the facility, and installed cutting-edge computer systems and other technology aimed at creating efficiencies in the product cooling process.

D’Arrigo Bros. of California also powers its 152,000 sq. ft. cooling and loading facility—and ranch meters —with 5.5 megawatts of electricity generated from solar power. This solar farm, which includes 18,000 panels on 39 acres of land, meets 87 percent of the electrical needs of the facility.

In another demonstration of the company’s commitment to efficient resource use, D’Arrigo Bros. of California also participates in a comprehensive recycling program, with the goal of recycling 100 percent of the recyclable materials used in the growing, packing and shipping of its products, which results in approximately 500 tons of cardboard and plastic being recycled each year.

These stories are just a few of the countless ways Western Growers members farm with the natural world in focus, to steal a line from the Bowles Farming Company’s definition of sustainability. These are exactly the types of stories we all must be dedicated to sharing with the public and our policymakers. With these stories, our message is clear: It is not farming or the environment. It is farming and the environment. We must be committed to pursuing public policies that pave the way for both to thrive in perpetuity.

Link to Original Article and others on Western Growers click HERE