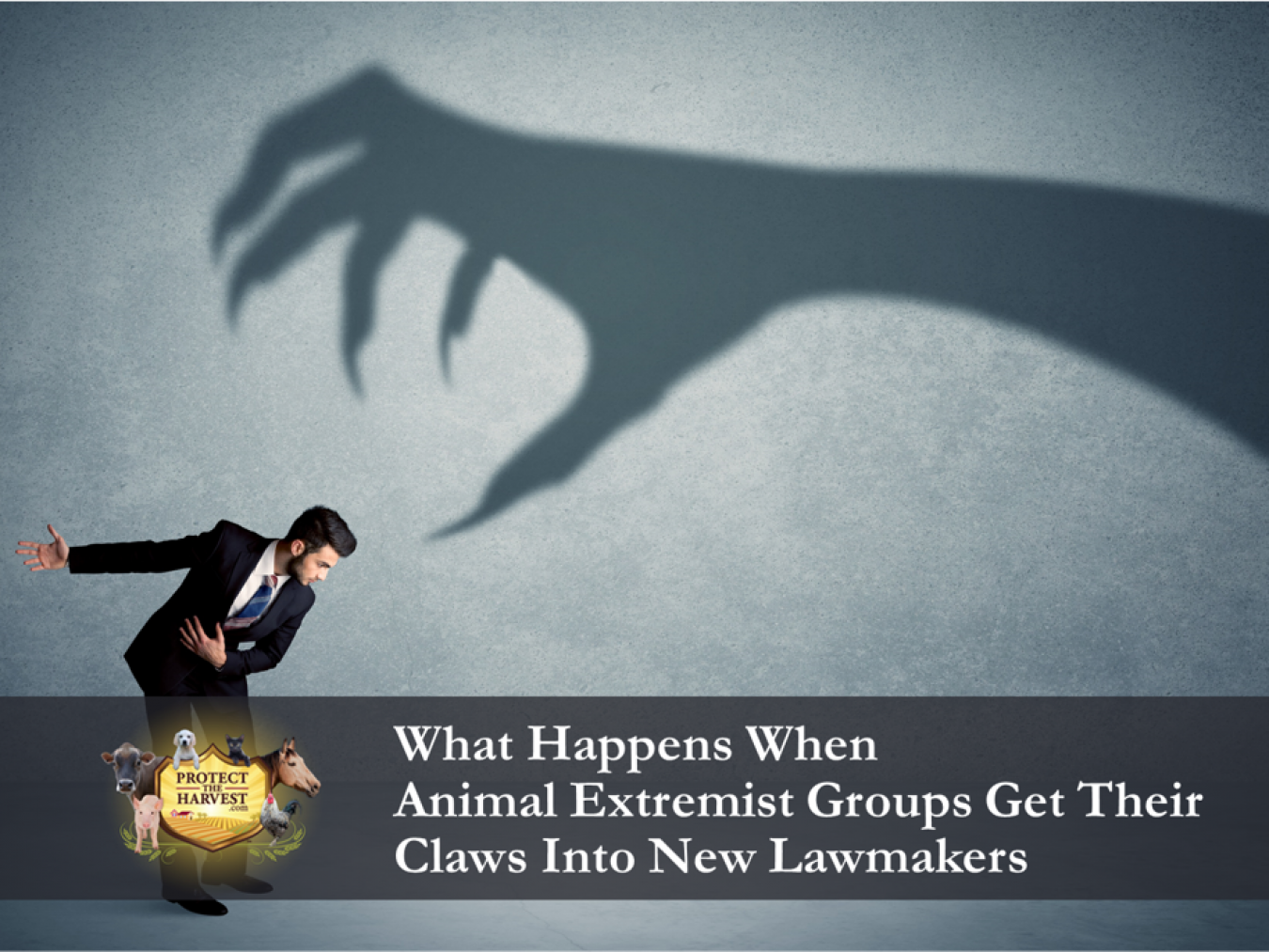 WHAT HAPPENS WHEN EXTREMIST GROUPS GET TO NEW LAWMAKERS

Animal extremists are moving swiftly to make their agendas a reality for all Americans. Subtly and in increments, they are making progress in legislation on the state and federal levels. They do this by directly influencing new, up and coming lawmakers by masquerading as authentic animal welfarists or friends of small farmers. They often target individuals who do not have a strong background in animal industries, but genuinely want to do the right thing. These lawmakers mistakenly support policies and legislation that upholds extremist agendas.
One such example of this is the case of Rob Nosse, who represents District 42 (Portland) in the Oregon House of Representatives. He took office July 7th, 2014 and his term goes through January 8, 2023. Unfortunately, groups such as HSUS have already jumped on him as a carrier for their extremist agenda during his brief time in office.
Recently Nosse became known in animal agriculture circles for his sponsorship of a 2021 bill against large Oregon dairies. This bill would temporarily prevent the issuing or renewing of any licenses or permits to new dairies wanting to operate with 2,500 or more cows. It would also inhibit already existing dairies from expanding to such a size.
This is not his first go around with extremist-influenced legislation. Looking through his political activity and affiliations with groups such as the Humane Society of the United States (HSUS) would indicate that he is another example of a politician specifically targeted to move their agendas.
Recent examples like this should be a call to action for farmers, landowners and those who care about authentic animal welfare. They need to be aware of what is happening within their state and local governments and rise to action by contacting their elected officials while sharing their thoughts and knowledge.

Nosse has introduced or supported many alarming bills over his short tenure. Earlier this year, he co-sponsored both Oregon Senate Bill 583 and Oregon House Bill 2924 with Senator Michael Dembrow. Both of these use nearly identical summary language that targets large dairies in order to prevent their establishment or growth in the state of Oregon. Section 2 reads:
“This 2021 Act being necessary for the immediate preservation of the public peace, health and safety, an emergency is declared to exist, and this 2021 Act takes effect on its passage.”
These bills are largely in retaliation after Lost Valley Farms was cited for over 200 environmental regulations violations and ultimately went out of business. They are an example extremist groups have pointed to in their attacks against dairy farmers in Oregon and other states.
However, the overwhelming majority of large Oregon dairies are doing the right things – with the mishandling of Lost Valley more an exception than the norm. Threemile Canyon Farms, one of the state’s largest dairies with 70,000 total animals has extensive environmental and sustainability practices in place – earning them one of the 2020 U.S. Dairy Sustainability Awards.
Tami Kerr, executive director of the Oregon Dairy Farmers Association warned against the bills in an OPB.org article. “If you are in compliance with all of your permits, then you have right-to-farm protection,” Kerr told the outlet. “This bill would take that away, and that’s very problematic.” Kerr also noted that the vast majority of Oregon’s dairies are family owned and operated. With the current dairy economy, it is often a necessity that they expand their herds to stay profitable. These bills would directly prevent them from doing so.

Nosse has been involved in many bills regarding animals and property:

•He co-sponsored Senate Bill 723-2 in 2019, in an attempt to ban coyote hunting competitions. This bill was set in motion after HSUS put out footage of hunters coming back from the Oregon State Farm Bureau’s Young Farmers & Ranchers coyote hunting tournament.
•He was also a supporter of the Oregon Wildlife Corridors Act (House Bill 2834), which is concerning for farmers and rural landowners because it would give the government the power to determine which areas qualify as “areas which designation of wildlife corridors is of high priority.” As such, it could dictate what happens with their private land if deemed one of these areas. According to the bill “The identification of the high-priority areas shall be developed using ecological criteria and considerations related to the vulnerability of focus species, including but not limited to: (A) A designation of a species by the federal government or the State Fish and Wildlife Department.”
•In 2019, Nosse voted yes on Oregon Senate Bill 1019, now signed into law, which requires all laying hen facilities to transition to cage-free systems with required enrichments by January 1, 2024. The HSUS declared this as a “monumental win.” That wasn’t the first extremist group “win” in the state of Oregon.
•Back in 1995, the Animal Legal Defense Fund was directly involved with the passage of Oregon House Bill 3377. This allows for “peace officers” to enter private property without a search warrant if they are concerned for an animal’s welfare. Similarly, Senate Bill 614 introduced in 2015 – which Nosse voted yes on – allows a “peace officer” to obtain a search warrant and enter the premises or motor vehicle where an animal, suspected of abuse or neglect, to impound the animal.

A blog post also discussed Nosse’s interest in other bills that include banning greyhound racing.
In this same visit he plainly told the author, who is affiliated with HSUS, “I’m a labor and jobs guy, so I don’t know much about animal welfare issues. I appreciate you coming in and bringing me up to speed.”
And this is where the issue lies, animal extremists – not welfarists – come in and intentionally misinform lawmakers like Nosse. They make their efforts appear to be in the best interests of farmers and animals, but they are small, subtle steps to satisfying their larger agendas. Small acts of support and sponsorship make politicians like Nosse become go-to figures for groups like the HSUS.

A Target for Extremists

Animal extremist groups know the role that legislators need to play to enforce their ideologies. Nosse is a classic example of how lawmakers are influenced. This happens because few people have backgrounds in farming, ranching, animal agriculture, animal science, and/or property rights. This lack of practical experience is frequently used as a tool by extremist groups to further their own ideological agendas and are harmful to the lawmakers very constituents.
Extremist Groups Use Regulation and Legislation as a Weapon in their Agenda
This mode of operation is not at all surprising when we consider the great political and social moves to enforce animal extremist ideologies. This is done on a massive scale, one step at a time, while largely using regulation as a tool.
Bill Gates illustrates this very well with his increasingly vocal support of meat alternatives. In an interview with MIT Technology Review in February of this year, he said that he believes all rich countries should use only synthetic beef in the future.
“But it’s one of those ones where, wow, you have to track it every year and see, and the politics [are challenging],” he stated. “There are all these bills that say it’s got to be called, basically, lab garbage to be sold. They don’t want us to use the beef label.”

Representatives like Nosse Should Not Operate in an Information Vacuum

We must never forget that groups like the Humane Society of the United States, the ASPCA and others purposely present themselves in a way where they mislead the public about their ideology and agenda. Someone unfamiliar with livestock, breeding or animal welfare will not be able to easily see the wolf in sheep’s clothing. They will have no way of seeing through their fluffy summaries and the fact that they are hiding ulterior motives.

An Urgent Call to Animal Agriculture

With so much extremist activity happening in the political sphere, it is more critical than ever for consumers, farmers, professionals, and distributors to unite and voice their concerns about ordinances, codes and legislation.
The time for anyone involved or concerned with animal agriculture to idly sit by is long past. There is an urgent need for more people to become actively engaged with their local, state, and federal government. This includes helping educate political figures and sharing their stories – as well as actively promoting and supporting policies that will help improve animal welfare – not hinder it.

We, farmers, ranchers and animal owners are complicit as well in the Nosse type scenario.
There is no reason why Oregon residents who represent agriculture and other animal industries should not make their own personal connection with lawmakers in their state, especially lawmakers who are new to office. If you cannot personally reach out, then make sure to financially support the groups you trust so they can do so.
A practical first step is to call and email elected officials to make them aware of important news happening in the animal industries. This includes staying engaged with groups like us at Protect the Harvest, Western Justice, The Cavalry Group, National Animal Interest Alliance, Animal Agriculture Alliance, as well as state farm bureaus, livestock associations, and similar communities with the same common interest.
Fortunately, the internet has made it very easy for animal agriculturalists to come together and stay connected via social media and email. This also makes it very easy to stay active and informed on political actions happening and making your thoughts known to elected officials.

Sharing helpful information about animal welfare and what farmers are actively doing can also do a lot to politely inform politicians, friends and family about what is actually happening and how they can help us continue to do the right things. Protect the Harvest and other groups have articles and links to accurate information on animal welfare that can be shared via social media or email.
Since animal extremist groups are closely interconnected and often make it their mission to get into politics first, it makes it more difficult for those of us supporting real animal welfare to get our voices heard. To make more progress, action needs to happen quickly and efficiently – by directly making your thoughts and concerns known when this type of legislation gains traction.

Support Your Lawmakers Who Take the Time to Listen

Likewise, it is very important for animal welfarists to applaud good policies that uphold the rights and best interests of farmers, landowners, animals and different animal industries whenever possible. Thank your representatives and senators for doing the right thing and responding to your concerns whenever it is applicable.

We encourage our lawmakers, including Nosse, to connect with us at Protect the Harvest and other agricultural and animal ownership groups. We are happy to share the resources and information we have about how farmers and the animal industries work rigorously to promote and maintain and animal welfare and their land.