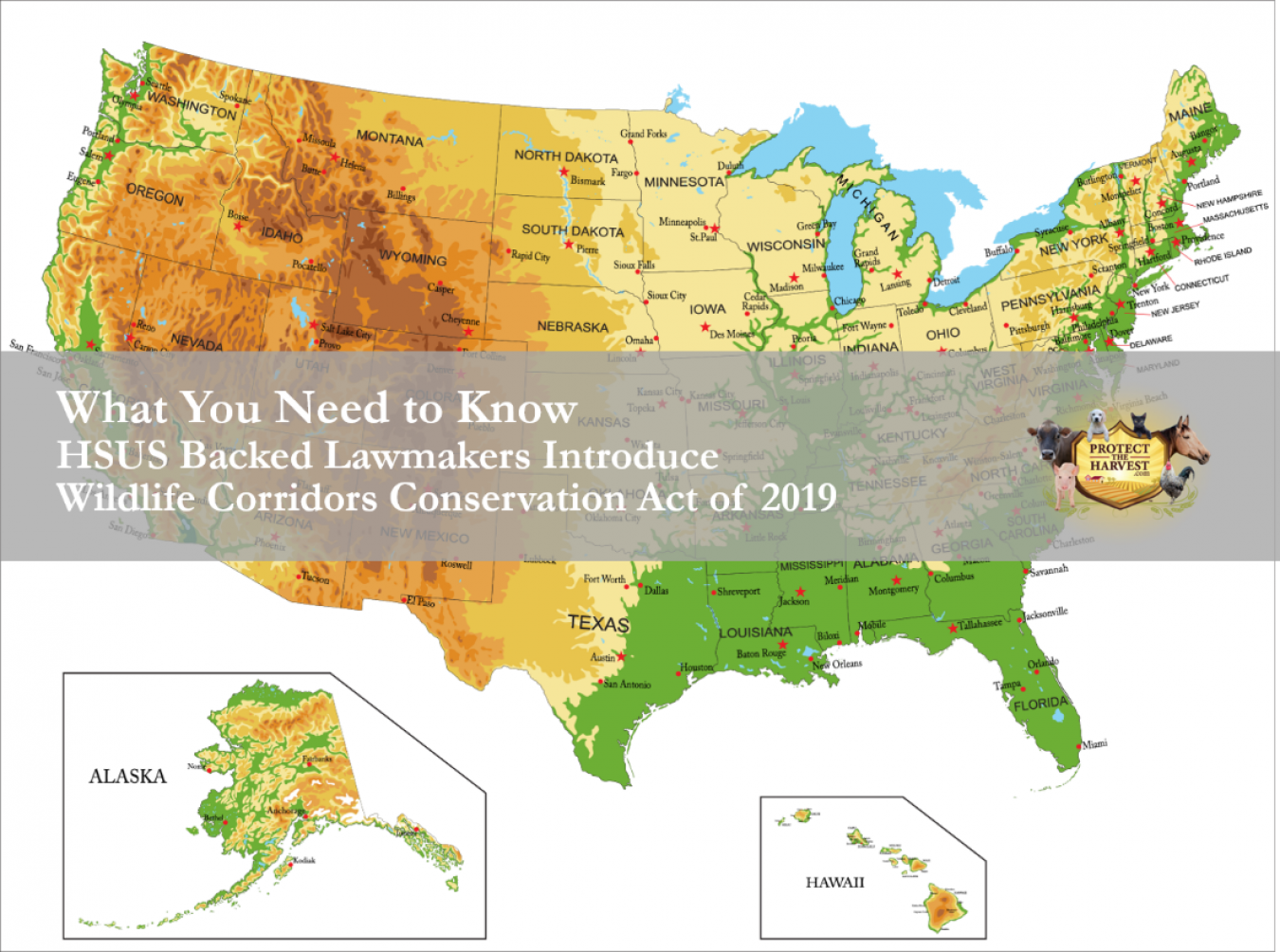 WHAT YOU NEED TO KNOW - WILDLIFE CORRIDORS CONSERVATION ACT OF 2019

The Wildlife Corridor Conservation Act, S. 1499 was introduced to the Senate May 16, 2019. Its sponsors are the usual cast of animal rights characters, many of whom are HSUS “award winners”; Udall, Booker, Harris, Merkley, Wyden, Blumenthal, Sanders, Whitehouse, Tester, and Feinstein. There is a related bill, H.R. 2795, introduced on May 16th, of which a summary is in progress. H.R. 2795 has been referred to the House Committee – Natural Resources, Agriculture; Armed Services; Transportation and Infrastructure.
The summary of the Senate Bill S. 1499 reads as follows, “To establish National Wildlife Corridors to provide for the protection and restoration of certain native fish, wildlife, and plant species and for other purposes.” We have a very important question. What does the bill mean by the statement, “for other purposes”? This seems to be left intentionally vague so that it may be manipulated and enforced at will.
There is a lot to this bill, and we will just be covering some of the key points. We encourage everyone to read it and to follow the referenced codes to fully understand its implications.

The stated goal of S. 1499 is to establish a system of wildlife corridors on Federal land and water. It will be called the “National Wildlife Corridor System”. The plan is to claim these corridors utilizing several different avenues which include, statute, rulemaking under section 102, or via a land management plan developed or revised under section 202 of the Federal Land Policy and Management Act of 1976. We strongly recommend that readers stop and look up the Federal Land Policy and Management Act of 1976 to see what it allows.

Farmers and Ranchers Get Minimal Say in Bill’s Appointed Council

According to Sec 303, four councils encompassing the entire United States must be established in regard to the National Wildlife Corridors. These councils will comprise of a director of a state fish and wildlife agency, a tribal government official, a Federal agency liaison, no more than three nongovernmental or scientific representatives, and at least one farmer or rancher - but no more than three volunteers that are private landowners. We find it convenient that the people this bill would affect most are a minority in the appointed council. Including just one landowner seems to be another way the authors of this bill are trying to disguise this proposal as representing all perspectives on this issue. In fact, this single farmer or rancher will have little power on the council with only one vote.

Additionally, we find it concerning that three nongovernmental representatives may be included in this council. Our organization has shed light on several NGOs over the years that have values that line up with this bill and are not what they claim to be. Often, these groups have ties to serious animal rights and environmental extremist groups who aim to change and eliminate our American traditions, specifically farming and ranching. By offering up a larger voice to these individuals, we believe it is quite clear that this bill is not valuing the rights of the private landowners involved.

Corridors Can Be Established on “Potential” Habitat

In addition to the vague language about the management of this Act, the determination of the wildlife corridors seems to essentially encompass all lands.

The bill outlines that the wildlife corridors will be designated based on:

The sections regarding management of the corridors and environmental mitigation are of special concern.

The sections give the secretaries in charge jurisdiction to do the following:
• Implementation of strategies and activities that enhance the ability of native species to respond to climate change and other environmental factors. This is vague and broad-sweeping language. What is the intent?
• The mitigation or removal of human infrastructure that obstructs the natural movement of native species.
• Mitigation of damage to the natural movements of native species through strategies such as, the maintenance, replacement, or removal of dams, bridges, culverts, and other hydrological obstructions.

Tucked under the misleading title of “compatible uses” Sec 103 (d) states, “A use of Federal land or water that was authorized before the date on which the Federal land or water is designated as a National Wildlife Corridor may continue if the applicable Secretaries determine that the use is compatible with the wildlife movements of the species for which the National Wildlife Corridor was designated, consisted with applicable Federal laws and regulations”. There are key words here that are of concern; “may continue if the applicable Secretaries determine the use is compatible”.

It is written in the bill that the “Wildlife Corridors Stewardship Fund” will consist of donations, leaving much room for undue influence by special interest groups. In turn, the bill also states that the fund “may be used by the National Fish and Wildlife Foundation to enhance the management and protection of National Wildlife Corridors by providing financial assistance to the Federal Government, Indian tribes, and nongovernmental, science, and academic organizations,”. We have exposed the agenda and activities of several non-governmental organizations that seek to end the use of federal lands for producing food for our nation. We have also helped bring to light that these organizations use federal funds in which to sue the government. We believe this allocation is opening the door to provide funding to non-governmental organizations that are not concerned about what’s best for American farmers, ranchers, and rural property owners, or the American public who rely on the food they produce.

This Bill Offers Little Concern to the Rights of Property Owners

After reading The Wildlife Corridor Conservation Act, S. 1499 and considering who introduced it, we hope due diligence and a great amount of concern is given. Acts, like the several we have shared, if passed, look to change the face of this great nation. They will be detrimental to our ability to feed people if farmlands are converted. Private property rights seem of little to no concern, rocking the foundation this country was built upon. The funding proposed and the distinct likelihood this is a purposeful way to allow powerful and corrupt non-governmental organizations a powerful seat at the table should be given a very critical eye.

What is the true purpose of this and other Acts of the same nature?

Prev Article
Many Environmental NGO’s Do Nothing to Actually Protect The Environment
Next Article
Ranching In The West: Setting The Record Straight