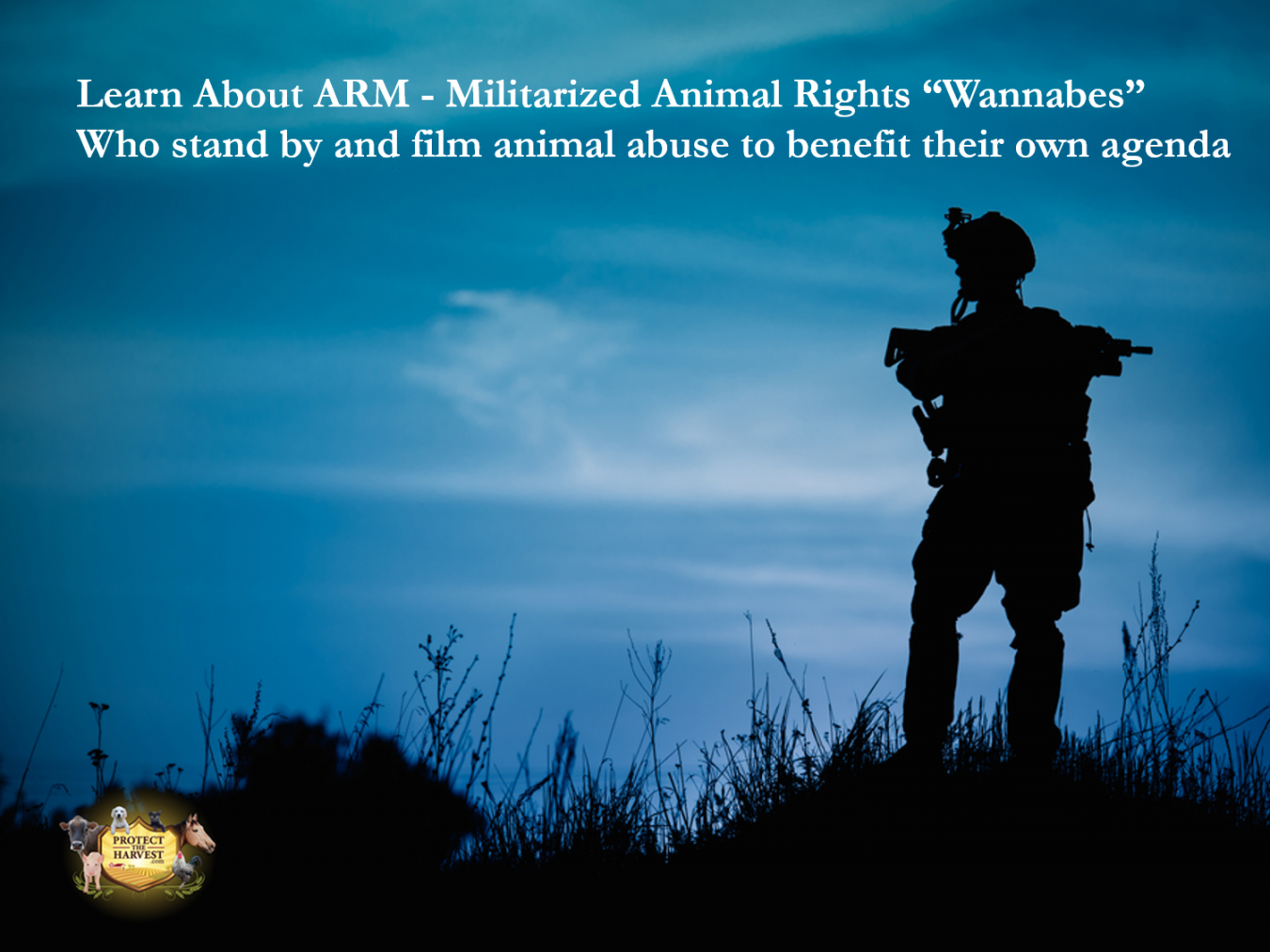 Protect The Harvest works to educate and inform the public about the activities of animal extremists and other non-governmental organizations. Animal Recovery Mission (ARM) is a radical animal extremist organization that farmers, ranchers and animal owners need to know about. Relatively unknown in most parts of the country except for South Florida, recently this organization has garnered a lot of media attention with their direct involvement in creating and distributing horrific videos showing abuse of dairy calves at Fair Oaks Farm in Indiana. In order to have a complete understanding of what happened at Fair Oaks, it is important to learn about the instigators, understand their ideology, mission, agenda, and tactics.

Animal Extremist Groups Have Their Own Brands – Its Good for Business

Animal extremist groups have become very clever at branding in order to attract specific types of donors. These branding efforts include imagery, logos, uniforms, protests, and projects designed to attract attention. For example, PETA is well known for their grotesque and tasteless public displays and protests as well as making outlandish claims and demands of their targets. The ASPCA is known for its ads on television showing stressed animals accompanied by sad music for dramatic effect. The HSUS, often called “PETA in a suit and a fancy watch” is known for its splashy and expensive fundraisers that attract celebrities.

Animal Recovery Mission (ARM) has a different approach to their branding. Cue up black and camo “special ops” outfits complete with tactical gear, bowie knives, and shaved heads and you’ve got their branding down to a “T”. ARM is based in Florida. Their leader is a man named Richard Couto who claims to have Blackwater Special Forces training. His Facebook profile is filled with Rambo-like images of him in a variety of different poses reminiscent of movie posters.

The Radicalization of ARM – Progression Into a Militarized Vegan Agenda

After reviewing their military themed website, it is our opinion that this group has progressed deep into animal extremist ideology. In the beginning, some might argue that Couto’s cause, while wrongly implemented, was worthy. He discovered illegal and inhumane animal slaughter operations in the backwaters of South Florida and did something about it. Somewhere along the way, Couto became radicalized. In an early video on the ARM website, Couto talks about how he eats meat, but is against meat harvested inhumanely. Now, however, the website is geared toward a militarized vegan agenda. Under the “Campaigns” tab, they have a graphic that reads, “They value their lives like we do. Be fair, be vegan.”

As a part of the organization morphing from an animal rescue group to vegan militants, on their public outreach tab ARM shows in 2018 that they, “…participated, presented, and exhibited in over 10 nationwide events” as a part of their Humane Education Division. This included various VEGFEST events, a vegan body building event, the Reducetarian Summit, CowCon and the Eat, Drink, Vegan festival. They also show connections to other activist groups including “Anonymous for the Voiceless” and “Animal Save”.

This change in ARM’s ideology from animal welfare to animal extremism is significant. The vegan viewpoint based on the animal extremist ideology is that all animal agriculture is wrong and must end. Therefore, they are naturally going to find issue with common animal welfare practices in animal agriculture and purposefully misrepresent those practices to the public. Their aim is not to ensure animals are well cared for, but to influence the public. This is evidenced by the recent press conference held by an ARM member, AJ Garcia, and broadcasted by WRTV Indianapolis on their Facebook page on June 12th. Garcia said, “We are taking it upon ourselves to investigate these farms and to show the public how their food is produced. Law enforcement is not in charge of that.”

Under their “Accomplishments” tab, they list different “operations” showing categories that reveal the group has expanded from its initial mission of exposing illegal slaughter operations. In 2017 they launched a division to investigate farms. They sent ARM operatives to seek jobs at targeted dairy and egg farms with the intent to create videos in order to discredit farmers. In the press conference on June 12th, Garcia admits that they visited Fair Oaks Farm and decided to target the farm because they didn’t believe what they saw on their public tour. Discrediting Fair Oaks was their ultimate goal when they had one of their operatives apply for a job.

On its website, ARM claims that they collaborate with law enforcement; however, there are plenty of news articles and statements by law enforcement that show a much different story. A November 14, 2018 article in the Miami Herald titled, “Miami cockfighting case fizzles. Prosecutors Blame Animal-Rights Group for Fouling it Up”, clearly outlines the antagonistic relationship ARM has created with law enforcement. The article’s author writes, “The case has exposed simmering tensions between the much-publicized animal-rights group and law-enforcement agencies across the state that accuse Couto of skirting the law and putting publicity before making viable cases. For his part, Couto insists that ARM investigators – he says most of them are ex-cops or military members – are “trained better than law enforcement” and can put together “stronger cases” for prosecution. “We don’t need to work with law enforcement,” Couto said Friday in an interview with the Miami Herald. “There is very little difference between ARM investigators and, let’s say an undercover narcotic unit with the Miami-Dade police department.”

The Miami Herald article continues, “…the group’s relationship with law enforcement in some counties has turned increasingly tense. In Southwest Florida, Couto and his group held protests and a press conference to blast law enforcement for failing to arrest people associated with a series of suspected illegal slaughterhouses. But Lee County State Attorney Steve Russell and then-Sheriff Mike Scot wrote a memo to elected officials saying Couto’s group was refusing to work undercover under the safety and supervision of detectives, raising doubts about the legality of the videos. They called out Couto for bragging about being able to skirt laws against entrapment, “Apparently, they feel they can pick and choose what laws to follow.”

In a strikingly familiar statement, they go on to say that Couto and ARM’s approach is one where the ends justify the means, “contrary to the basic principles of justice in America….No ethical law enforcement office or prosecutor would condone that attitude or conduct.”

Working Outside the Law

Animal Recovery Mission’s website provides further insight into the mindset and branding of this organization. Under the Media heading on the ARM website in a promotional video for the organization titled, “Hunting Evil” their leader, Richard Couto can be heard saying, “I’m not a cop, I’m not an attorney, and I do not play by their rules” and “Infiltrate their property, infiltrate their lives, collect as much information as I possibly can. Strike that operation and we are going to wreck your lives…”

Actions Outside of the Law Hinder True Abuse Cases

In at least one circumstance where the actions of ARM have caused prosecutors to decide against filing charges in true cases of abuse or illegal activities with animals. Miami-Dade Assistant State Attorney Michael Filteau is quoted in the Miami Herald article as having, “serious ethical concerns” about ARM’s tactics. In the article Filteau further comments, “I believe that filing such charges would tend to encourage ARM…to conduct future undercover investigations without appropriate supervision and support from law enforcement agencies and thus engage in behavior that is both extremely unsafe and potentially illegal” 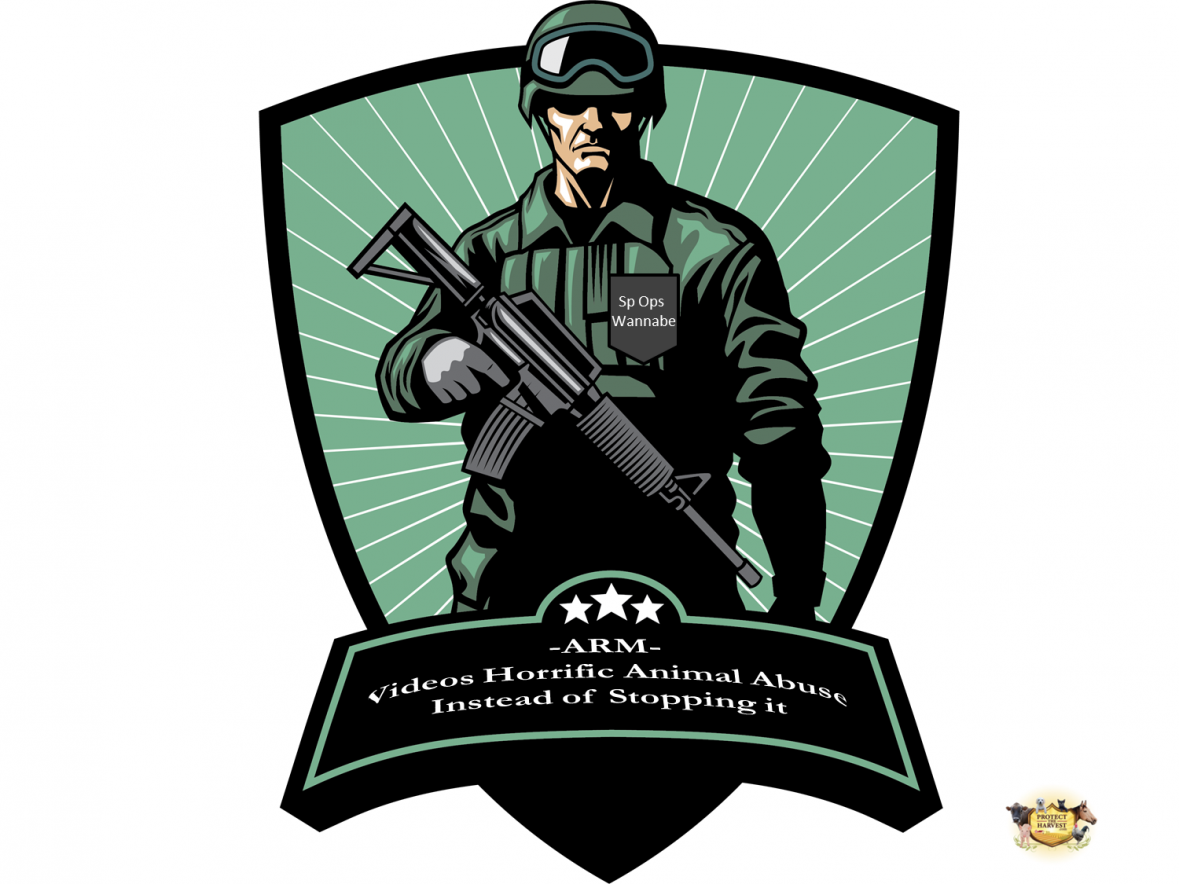 During the WRTV Indianapolis press conference on June 12th, when asked by a reporter, “What do you think about the charges that were filed after the first video was released?” AJ Garcia from ARM responded with, “So of course we always welcome files being charged. Right? Even though they are only misdemeanor charges, but the perpetrators still haven’t been found. So, the police can file charges but if they don’t go out and find those who committed the crimes then nothing really comes of it…This is much bigger than just a couple of misdemeanor charges. This is again showing the public that the dairy, inside the dairy industry there is systematic cruelty that goes on behind closed doors.”

The reporter then asked, “Why not then tip off the police right away so that they can be arrested immediately. The few people that were involved?” Garcia answered, “Again, because if we are still under-cover at those locations and we gather evidence and we tip off the police, there’s no guarantee for the investigator’s safety and we would have to pull the investigator out and not be able to continue to gather evidence or not be able to get hired at a different location.”
This is proof that they are not truly interested in stopping abuse and punishing the perpetrators. The ends justify the means in their book. It is more important to them to paint all of animal agriculture as bad and so they stand by with their video cameras running while unspeakable abuse is happening to innocent animals.

Fair Oaks is far from the first facility where ARM has significantly delayed providing evidence to law enforcement. They have a consistent track record of failure to submit information on a timely basis. There is even record of this in the news articles ARM has posted on their website.

Here are just two of many examples:

Dairy Owner, “We are equally concerned about the manner in which this video was brought to our attention. Had the “undercover employee brought this to our attention when it occurred, we may have been able to prevent it earlier. Dairy farmers have the utmost responsibility to compassionately care for our animals and this is not an adequate reflection of how we do that on a daily basis”

“I really wish the individuals who recorded the video would have given the video to OCSO at the time, because the abuse probably continued… It was unfortunately publicized before it was ever reported”

“According to what has been reported, the Animal Recovery Mission had three weeks of undercover investigating they conducted. Had this alleged abuse been brought to our attention, my deputies and detectives could have resolved this issue then”

In a Broward Palm Beach New Times article, the following information about ARM is provided by Couto:

In an article on the website Deeproots.com, Couto makes these claims:

In addition to targeting farms and other projects they call “operations”, ARM has been involved in the constant harassment of the Bureau of Land Management and their efforts to manage the populations of horses on American rangelands. Couto’s Facebook profile shows that he has checked in several times at Return to Freedom in Lompoc, California. Return to Freedom is the sister organization sharing board members of the American Wild Horse Campaign. The ARM website text regarding rangeland horses is full of misinformation about the plight of horses on the rangelands and the BLM’s efforts to manage the horses.

Who Is The Real Abuser?

According to the article in New Times, the types of “evidence” Couto claims his group has collected on video include: tortuous deaths, boiling animals alive, stabbing animals to death, and skinning animals alive.

Lets’ think about this for a moment.

Could you stand by and video that kind of horrific treatment of animals?

If you had Special Ops training, wouldn’t it be easy to stop the activity from continuing in the first place?

What organization is using abuse of animals to gain media attention and to make money via donations?

Who is the real abuser here?