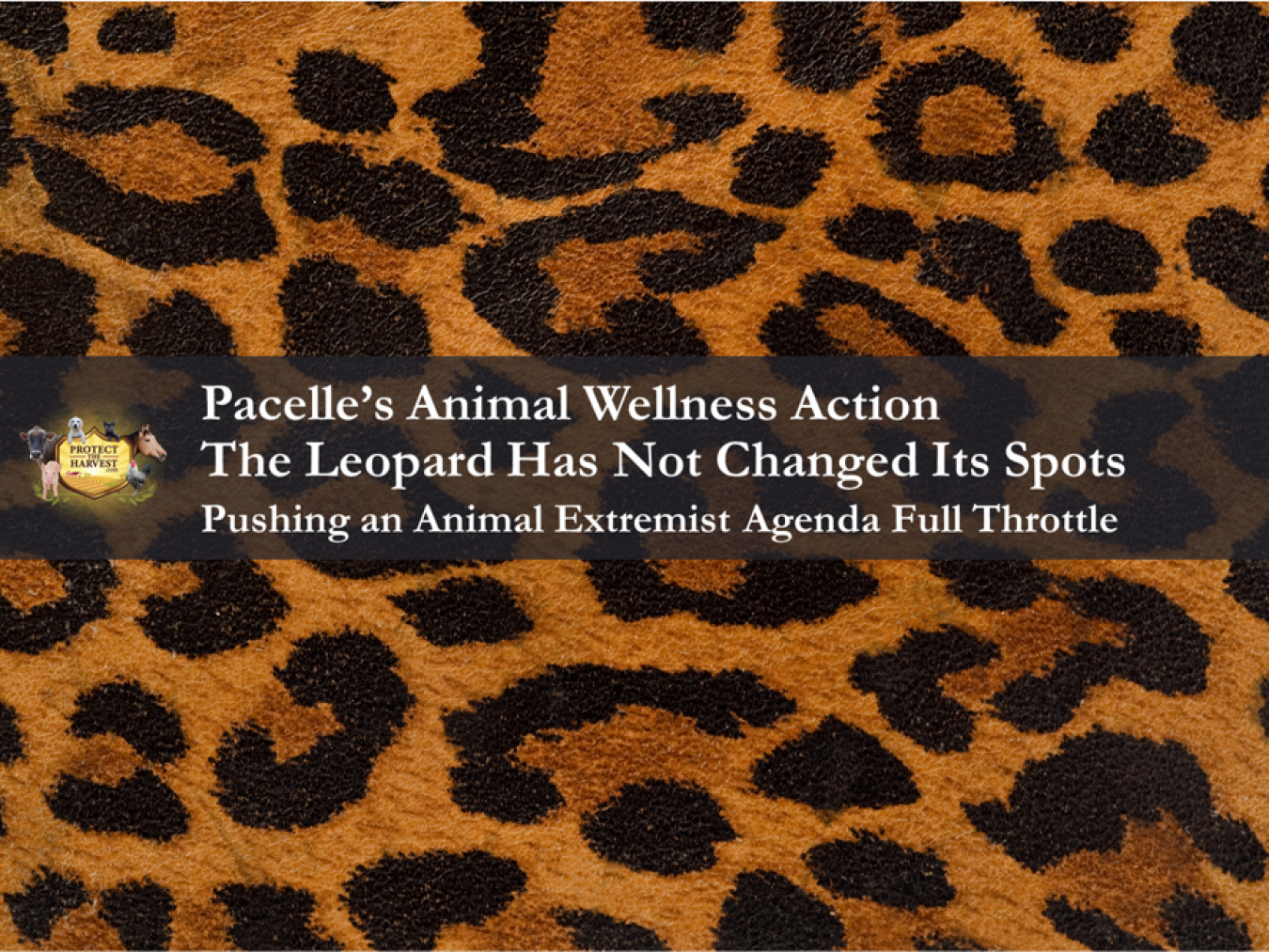 For three decades, Wayne Pacelle has been a high profile and very active player in the animal extremist community. We have published numerous articles about Pacelle, his animal extremist ideology and agenda, as well as his activities with the Humane Society of the United States (HSUS). In 2018, he resigned as CEO of the Humane Society of the United States (HSUS) under the cloud of numerous sexual harassment claims. He has now emerged from the shadows and has formed a new animal extremist group, Animal Welfare Action.

We feel it is important to continue to highlight the activities of one of the nation’s most high-profile animal activists extremists as he and his cronies are continually working towards changing the philosophy and laws of this country. Their goal is beyond making everyone vegan and controlling how and what we eat. They also believe they have a right to control our hobbies, entertainment, sports, and ultimately our rights to utilize, own and work with animals.

A Wolf in Sheep’s Clothing

What continues to make Pacelle so dangerous and his threat to animal owners everywhere is his ability to come across as mainstream. Our friends at HumaneWatch even made a video about how the HSUS is akin to PETA in a suit with an expensive watch. Pacelle cloaks his radical ideology and agenda by acting like he is simply “someone who wants to make things better for animals.” While PETA, Direct Action Everywhere (DxE), and other animal extremist groups are promoting crazy stunts, Pacelle presents his associations as ‘animal welfare’ organizations. He is famous for his approach of avoiding protests and going right to lawmakers. Note his statement on LinkedIn: “That’s why we must engage in every aspect of the political process, including lobbying for legislation, tipping the balance on ballot measures, and inserting ourselves into candidate elections to get the right people into office.”

Pacelle’s True Ideology and Agenda Revealed in his Book

While he presents his organizations and himself a certain way, Pacelle’s mission is very clear as indicated in his book, Humane Economy. We have written about how his book reveals his alarming agenda and the article can be found on our website. No matter his approach, Pacelle’s true ideology is animal extremism. He believes all humans must become vegans. He has stated, “If you use animals, you are guilty of animal cruelty…”

Armed with his Yale B.A., Pacelle actually started out with a short stint as an instructor at US Fish & Wildlife service in the early 1990’s. After relocating to Washington D.C., he moved into various extremist NGOs holding executive and leadership roles. Most notably, he spent over twenty-five years at the Humane Society of the United States (HSUS). There he held the title of President and CEO from 2004-2018, and cultivated some high profile and unique alliances including the Coalition for Horse Racing Integrity. This group, to the dismay of many in the racing and horse world, aligns HSUS with The Breeders' Cup and The Jockey Club.
There was also the disturbing headline in 2016 that SeaWorld, in a joint announcement with HSUS, would end all breeding of its Orcas.

The mainstream appearing Pacelle manages to navigate his way into situations and headlines that help move his agenda forward. In 2017, after the HSUS received positive social media attention from Lara Trump, Pacelle was invited to a White House roundtable to discuss animal issues. This happened even after Pacelle and the HSUS had endorsed Hillary Clinton for the Presidential candidate and declared that a Trump administration is a “threat to animals everywhere.”

Despite gaining favor with the Trump Administration, there are other headlines about Pacelle which are negative. His high profile and embarrassing sexual harassment scandal in early 2018 is one such headline which was comprised of numerous claims. The results of the scandal prompted him to resign from his position with the HSUS.

Complaints of Misuse of Donor Funds to Pay for Lawsuits

Previous to the 2018 sexual harassment scandal, investigators found three other similar claims against him. Apparently, those claims had already been settled using monies collected from donors who thought they were helping shelter animals.
This is not the first time a complaint has been made against the HSUS for misusing donor funds. In 2014, HSUS along with other animal rights extremist groups settled a multimillion-dollar lawsuit with Ringling Bros. Circus/Feld Entertainment. These groups were criticized by charity evaluators, and downgraded as a reputable charity for utilizing donated funds for this $25,000,000 settlement.

Following the scandal at HSUS, Pacelle emerged just half a year later in 2018, as the founder of a new Political Action Committee, Animal Wellness Action (AWA). Because of this, there is now talk of Pacelle violating his non-compete clause by founding and serving as the President (a title he stills holds today) of an animal welfare PAC that would now compete for donations to the HSUS arm (of which Pacelle is noted as the co-founder), Humane USA PAC. From HSUS internal staff, to donors and beyond, HSUS leadership was criticized for remaining tight lipped and not transparent regarding his sexual harassment charges, his leave, and then the founding of the new PAC. Criticism and details can be found in various sources including here.

Beyond his resignation, Pacelle’s relationship with the HSUS has changed. In December 2020, Pacelle publicly criticized the HSUS for helping to halt a bill he and Animal Wellness Action were pushing hard known as the PAST Act (Prevent All Soring Tactics). His announcement stated: “What that organization has done on the issues of Tennessee Walking Horses, wild horses and burros is a malpractice”. The entire article he authored can be found on the AWA website. We have no doubt that he would not hesitate to cozy back up to the HSUS if it made him look good or furthered his radical agenda.

Pacelle is once again utilizing more mainstream and politically correct terminology with his new AWA group. He is joined at AWA by Marty Irby, who serves as the Executive Director and Chief Lobbyist. Their ties go back to the HSUS where Irby was a Senior Director from 2016-2018. Concurrent with his role at the AWA, Irby is also the President of the American Horse Protection Society.

What Pacelle is currently up to can be found on his organization’s website and in the numerous articles he has penned. He appears to be very active through AWA, working to move his agenda forward in a more favorable political climate. That being said, he is not overly optimistic about Tom Vilsack, who has been appointed as the new Secretary of Agriculture. The former Iowa Governor held this role in the Obama administration as well, although animal rights extremist groups did not feel he was highly effective for their cause. Pacelle writes in a recent January 2021 article that Vilsack must do more this time around. He noted that in his last occupancy in this role, “Vilsack’s tenure was not known for any significant animal welfare achievements, other than the downer cow issue that had been set in motion by the prior Agriculture Secretary Edward Schafer.” Time will tell if Pacelle and his followers can get the new administration and Vilsack to sign on to their agenda. Pacelle may not be overly optimistic, as is evidenced in a recent AWA podcast, where he and Irby discuss their plans and agenda going forward with the Democrats in control. Irby believes they will “get more done than any point in history” and states that, “Wayne has come up with so many terrific ideas. Something I learn every day from this guy.” It sure sounds like Pacelle expects he is setting the agenda. For his part, Pacelle sounds much more skeptical noting that with the fairly even legislative divide, there will be very little progress on any front. He notes that his organization is able to work with any Congress and President. He lacks Irby’s optimism and wraps up his comment with “it will not be easy.”

As Pacelle and his team continue pushing forward they provided the new administration with a suggested road map for the first 100 days with respect to animal issues. Of course they are resorting to catchy, alarmist headlines tying the Covid-19 pandemic to animals. Still leaning on his ‘Humane Economy’, in mid 2020 he authored an article that linked the pandemic to the choice to eat meat. He also admittedly notes in another 2020 AWA article that, during these difficult times and the lock downs that grocers are having a hard time keeping meat stocked, but “Beyond Meat was still on the shelves, showing that the appetite for animal flesh is itself a reflex during a time of crisis.” He often talks about and promotes meat facsimiles (fake meat) and milk substitutes.

The AWA website reveals a number of agenda items for the organizations, its sister groups and councils. Some of these are familiar to us as he has been pushing them since his tenure with the HSUS.
Some of the other platform items for Pacelle and AWA include:

The AWA Has Developed Long Tentacles

The AWA website provides much more detailed information about their entire agenda as well as the agenda of their affiliated organizations, Animal Wellness Foundation, Center For A Humane Economy, National Law Enforcement Council, National Veterinary Council (see our article on our website), and the Global Council for Animals. One thing is for sure – Pacelle is not slowing down and he is eager to stay in the spotlight, which for now, appears to be by working through the AWA organization. While we would agree that there is certainly a responsibility to properly care for animals, we disagree with his ideology and true agenda which is to end animals in human care. We will continue to expose the affiliated groups he has founded and keep eye on Pacelle and his agenda.

This leopard has not changed his spots.