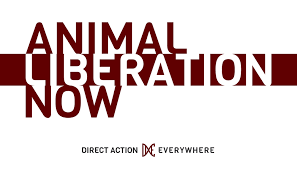 Direct Action Everywhere, also known as DxE, is an emerging radical animal extremist group that was founded in 2013. Based out of San Francisco, their cult-like following has spread to numbers of international cells.
Their motto is “Animal Liberation”, and their website has three main headings, “Confinement, Greed, Death.” They do not support incrementalism, a tactic that other animal extremist groups employ. Their dream is for people who eat animal protein products to be arrested and prosecuted for crimes. They also plan to have their members elected to political office.

DxE Founder Wayne Hsuing is a lawyer. Before graduating from law school at the University of Chicago, he attended MIT. According to Wikipedia, “As a lawyer, Hsiung was involved in environmental advocacy and studied behavioral economics, studying with economics scholars including Eric Posner and Mark Duggan. He partnered with behavioral law and economics scholar Cass Sunstein to write an analysis of the effect of climate change on nonhuman animals.”
To note, Cass Sunstein was the Administrator of the White House Office of Information and Regulatory Affairs in the Obama administration from 2009 to 2012. What many may not know is that Cass Sunstein is an animal rights ideologue. He authored a book titled, “Animal Rights: Current Debates and New Directions.” Also of note is that Sunstein is married to Samantha Power, United States Ambassador to the United Nations from 2014 to 2017. Samantha Power published a book in 2008 about the life of Sergio Vieira de Mello, Special Representative of the Secretary-General of UN. One of his many roles at the U.N. was his involvement in Agenda 21 implementation and the Habitat Agenda.

DxE’s radical approach to animal liberation involves breaking and entering, stealing animals from farmers, and invading farms with busloads of their followers which exposes animals to potentially deadly pathogens. They look for confrontation in order to draw attention to their activities and agenda. The founder of DxE, Wayne Hsiung has had numerous arrests and is facing at least four felony charges for crimes he has committed (as of 2018). His arrests, however, have not stopped his illegal activities.

DxE calls their break-ins and thefts, “Open Rescue.” However, their activities show a complete disregard for animal health and welfare. They are not rescuing animals; they are stealing them and putting the health and welfare of other animals at great risk. The results of the break-ins and thefts of animals by DxE has led to the necessity of mass destruction of an entire flock of chickens. To date, DxE has stolen a piglet, pigs, kid goats, turkeys, and chickens. In one case, they stole backyard chickens from an 8-year-old girl.

Unlike other animal extremist groups that use cloak and dagger “cooperation via legislation” and animal welfare as a ruse to fool voters, DxE is straight-forward about their agenda. True to the animal extremist/animal liberation ideology where all animal ownership is considered slavery and therefore abuse, DxE has determined to also focus on smaller, organic farms. They have been doing this to demonstrate their belief that all animal agriculture is abuse and no forms of animal agriculture are acceptable to their ideology.

One of the ways DxE has increased their following is by producing numerous, heavily edited videos of their break-ins. These videos grossly misrepresent farming practices. According to the website Activist Facts, “In 2015, DxE released a video of hens filmed when some activists broke into a farm and stole livestock. The hens were from a Whole Foods supplier. After the video was made public, the local sheriff department investigated the farm and reported the farm to be operating at ‘industry standards’.” The owner of the farm responded to the video stating that the footage “isn’t anywhere indicative of our operation — they had to go through 15 barns off and on over a year to find three chickens they could use to make their point in this video.”

This group tends to focus on a target, and then they exert relentless harassment.
Some of their many tactics include disrupting political events, covering themselves in blood and laying down in front of a butcher shop, protesting inside stores and restaurants, screaming at restaurant patrons, covering themselves in feces, damaging meat in grocery stores, and most recently a DxE group invaded a restaurant and played tapes of what they claim are animals dying. To date, some of their targets have been:

For more detailed information about DxE and their agenda visit: https://www.activistfacts.com/organizations/direct-action-everywhere/