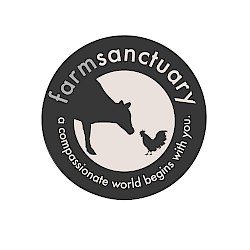 FarmSanctuary.org is a radical animal extremist group with a vegan agenda that targets animal agriculture. One has to ask, “What does a lawyer, several fashion designers, a media producer, investment managers, a public relations executive, several marketers, an actress, and a philanthropist know about farming and the proper care and welfare of farm animals?” The answer is, “Nothing”, which is pretty obvious when you look at the photoshoot from their t-shirt collection! Collectively, their background and experience has no practical application in farming and yet, these are the founders and board members of FarmSanctuary.org.
They have big plans. Farm Sanctuary is partnered with the Humane Society of the United States. Like the HSUS, they are involved in state and federal legislation. Follow the “get involved” tab on their webpage and you’ll find:

“Farm Sanctuary works hard both to pass good state legislation and to stop bad state legislation.”
“Because state legislative sessions are generally fairly brief, and because we coordinate activities on bills with other organizations, we generally do not post state legislative updates here, but instead we ask that you please make sure we have your email address and postal address (so we know what state you’re in), and we will alert you to any future legislation that affects farm animals in your state. Also, please be sure to follow the Compassionate Communities Campaign on Facebook for news, petitions, and other opportunities to help our farm animal friends.”
“Since Farm Sanctuary partnered with the Humane Society of the United States (HSUS) and the Animal Rights Foundation of Florida… momentum has spread to get rid of some of the worst abuses of farm animals.” 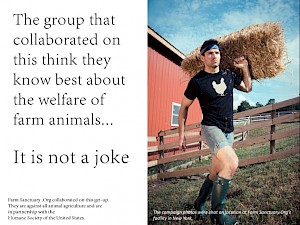 According to the webpage, Activist Facts, Farm Sanctuary is growing in power and resources:
“The organization has grown from selling tofu dogs at Grateful Dead concerts into a multi-million dollar enterprise committed to the systematic abolition of livestock agriculture. And its political capital has grown even faster than its budget. Farm Sanctuary activists have already scored several victories in their quest to cripple livestock farms, and nothing — not even electoral fraud convictions — seems to slow their pursuit of that goal.”

“Farm Sanctuary uses ballot initiatives to sidestep state legislatures. And while it’s vulnerable to activist fraud, the ballot initiative process sports a feature even more useful to Farm Sanctuary: the vast majority of voters will know next to nothing about what they are voting on.
Farm Sanctuary stacks the odds further against an informed electorate with an even more deplorable tactic: it never gives the full story, knowing that the urban audience for its propaganda doesn’t know much about livestock agriculture.”

Protect The Harvest, along with other organizations, for example, Humane Watch, The Calvary Group and Animal Agriculture Alliance, have been sounding the alarm for years about the growing threat of animal extremist groups. Animal extremists are attacking our heritage, our right to feed our families, and our way of life. While we have been making progress informing and educating the public about their activities, unfortunately, there are still those that don’t know what is going on. Worse, there are others who do not believe these extremist groups will gain traction and impact us. The sad truth is they are making an impact. These extremist groups are well funded, active, and are joining forces. They are attacking our way of life, agriculture, and animal ownership, through legislation and other means. They need to be stopped and we need your help to spread the word about their activities and their agenda.