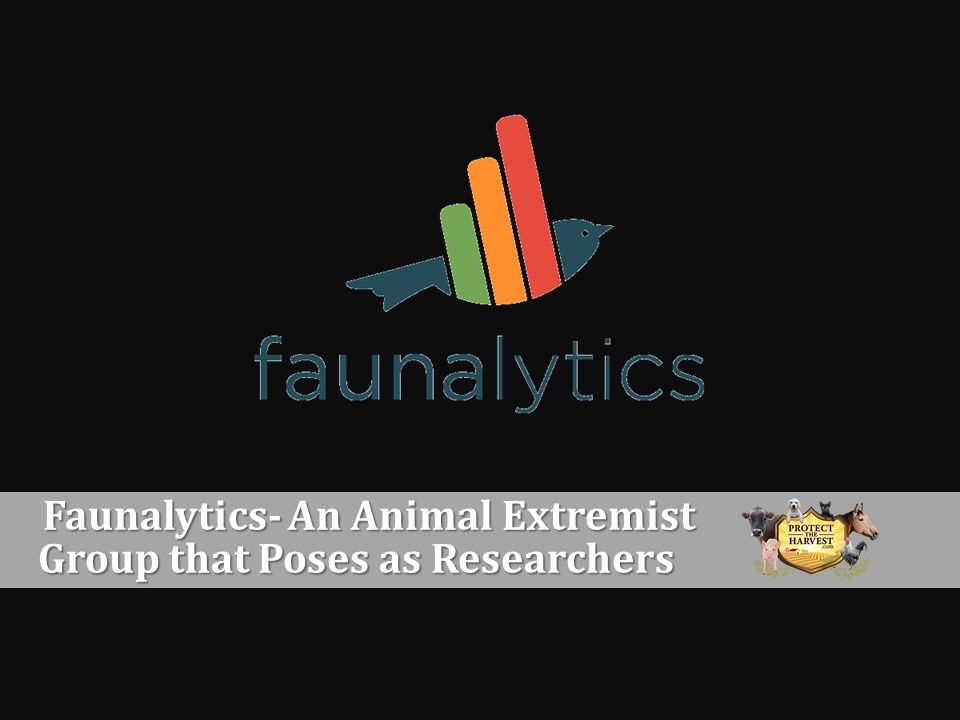 Faunalytics is an animal extremist and veganism group that spews out research projects, some of which are theirs, all in the hopes of destroying animal agriculture and forcing a vegan diet on the world. Even their name describes what they do. “Fauna”, comes from the Roman goddess Fauna, the goddess of earth and fertility. “Analytics” is the systematic computational analysis of data or statistics.[1] It is used for the discovery, interpretation, and communication of meaningful patterns in data. It also entails applying data patterns towards effective decision-making. It can be valuable in areas rich with recorded information; analytics relies on the simultaneous application of statistics, computer programming and operations research to quantify performance.

Faunalytics is a non-profit research organization claiming they are, “dedicated to helping animals by providing useful information to advocates to help them increase their impact.” Faunalytics was formerly called The Humane Research Council. It was founded in 2000 by vegan activist Che Green who served as Executive Director for 20 years before stepping down to pursue other avenues. He now serves on their Board as their Treasurer. Faunalytics’ website states they do original research, conduct surveys and impact evaluations in partnership with “animal protection” groups. The research they offer is free to anyone.

According to their mission statement:

“Faunalytics empowers animal advocates with access to the research, analysis, and strategies that maximize their effectiveness to reduce animal suffering. We provide research and resources to help the animal protection movement increase their impact.”

In the “About” section, they state:

“Faunalytics conducts essential research that helps the animal protection movement work more strategically to increase their impact. We also maintain an online research library of over 4,000 of summaries of external research on animal issues. The range of data and resources we offer, from topics including animals used for food, animals used in science, companion animals, wildlife, and more, help advocates understand how people think about and respond to animal advocacy.”

“Faunalytics is a team of research and communications professionals with strong personal commitments to animal protection. We formed the organization in early 2000 to improve conditions for animals by helping advocates gain access to valid, relevant, and insightful information. Since then, Faunalytics has developed a comprehensive vision for the use of such research to help animals, and our team now is now made up of dedicated directors, expert advisers, employees, and volunteers.”

In other words, they “research” to promote animal extremism and worldwide veganism and push for the end of animal agriculture. They use expertise in marketing and psychology to influence and manipulate public opinion in order to push their radical ideological beliefs.

Ties with Other Animal Extremist Groups

Faunalytics freely mentions who their donors are, which include many groups we have previously written about and you can find on our website under our “What You Need To Know” tab.

Some of these clients and partners include:

Just looking at their supporters exposes the extremist agenda of Faunalytics. Their website even states that they prioritize impact by striving to provide data that can “help as many animals as possible” by taking on research with high potential impact. They prioritize and select research questions based on a multi-stage process of suggestion, feedback and review. Their reviewers include not just their research team, but researchers and non-research advocates from other “animal advocacy” organizations. In other words, they use like-minded animal extremists to research, analyze and review their studies.
According to their stated methodology, Faunalytics researchers have PhD-level training and years of experience in social science, research methodology, and statistics. Their team of research volunteers have graduate-level training in research-related fields. Why this supposed methodology is so important will be exposed later. They also claim that their original studies are reviewed internally by at least two people (animal extremists and vegans). Their peer review process is flawed because they solicit external peer review from other researchers in the animal advocacy community (i.e. animal extremists) before running any study instead of having it reviewed by non-biased researchers.

Faunalytics and Their So-Called Research

The Faunalytics website shows the very strong animal extremist/vegan bent of their research group. It is important to note that no research by them will be free from bias.

Link to Dr. Taft's article can be read HERE

“...here are some ‘basics’ of the scientific method that are often neglected in animal advocacy research:

This well-known international scientist, who is pro-animal extremism and veganism, has called out the very group who says they are performing research to better impact animal extremist groups.

Who Are the People Behind Faunalytics?

The following biographies are directly from Faunalytics’ website. Note that every one of their board and research team members have all been involved in animal extremist and vegan groups. These people will continue to push for an end to animal agriculture not only in America, but also throughout the world.

Faunalytics Studies, Projects and Other Resources

Faunalytics not only offers a library of their research, but also research from other animal extremist groups. They provide custom research services, and The Fund for Animals was one of the first groups to use their “study” to push for an end to fur. Additionally they did a survey for cardiologists for the Physicians Committee for Responsible Medicine (another well-known animal extremist group), a poll of magazine recipients for the Animal Protections Institute (which merged with Born Free USA in 2007), as well as research for the groups listed at the beginning of this article.

Faunalytics claims:
“We have also launched breakthrough initiatives to help all advocates be more efficient and productive. The Faunalytics Fundamentals series, the Faunalytics Library, the Animal Tracker, and collaborative projects such as the lapsed vegetarian and vegan study bring advocates important new information. Our insight points people to the most promising strategies to help animals.”

Faunalytics, Nothing More than Another Group Bent on Destroying Animal Agriculture

Animal agriculture feeds the world, and Faunalytics is just another group determined to destroy livelihoods, promote food insecurity, and force their vegan agenda on citizens of the world. That is a frightening thought. Animal protein is not something that the human body can live without and stay healthy as we have shown in our Vegan Article series.
Animal agriculture provides food, medications, clothing, and many, many other by-products that are necessary everywhere in the world. There are already too many hungry people in third world countries, as well as food insecurity worldwide. The presumption that the world would be better without animal agriculture is truly frightening. We cannot let this happen and we will fight every day to ensure that it doesn’t.