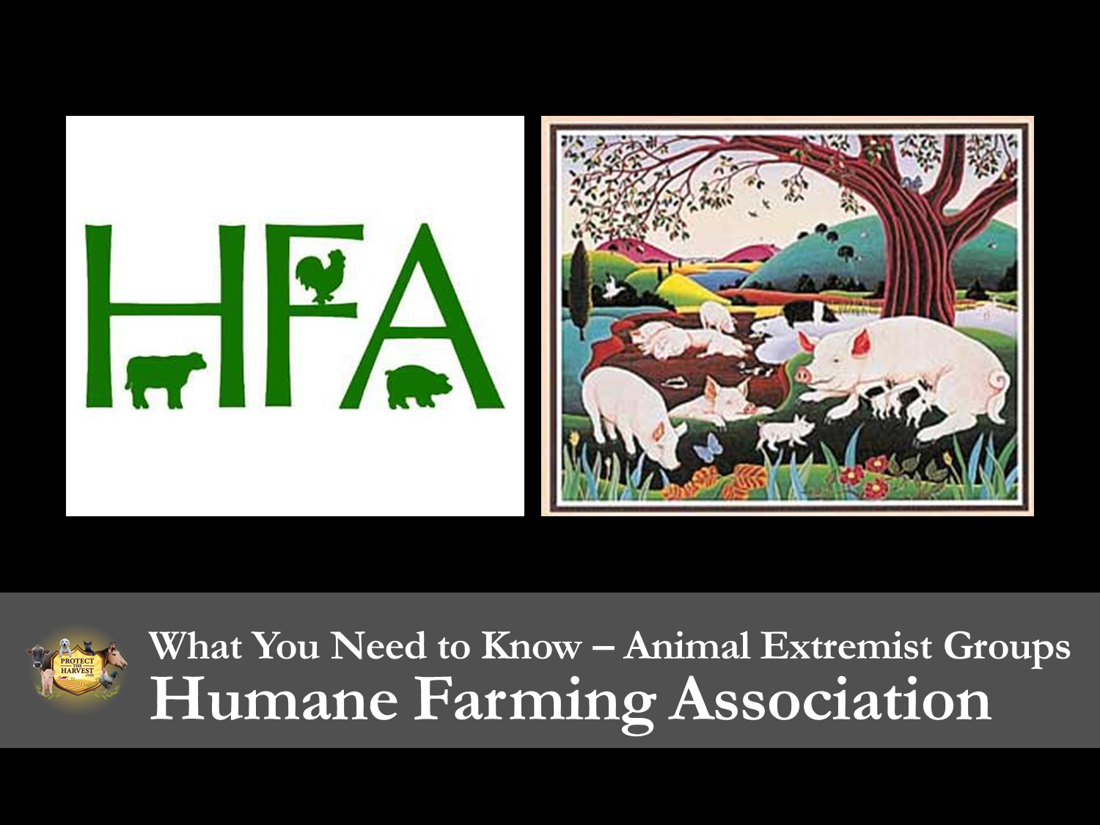 Exposing the Humane Farming Association and their Campaign Against Modern Farms

The Humane Farming Association (HFA) is a group that claims to be in support of farmers but are staunchly against large modern farms. While HFA is careful not to have the word “animal” in their name, a brief look on the organization’s website clearly shows they are an animal extremist group, not a group supporting farming or farmers.

It also appears they do not understand the basics of livestock animal welfare. HFA strongly maintains the “us versus them” mentality that is characteristic of the animal extremist movement. They even go so far as to paint farming styles they disagree with as a sort of enemy to authentic animal welfare which couldn’t be further from the truth.

At the end of the day, HFA is about animals – not farmers. A quick look on their website’s “About” section plainly states that the organization “is dedicated to the protection of farm animals.” What does their idea of protection actually look like? They point to their “anti-cruelty campaigns” as being a testament to that protection; one of which included a national boycott of veal products. They also boast having over 270,000 members since their founding in 1985.

Like so many extremist groups, HFA also has their own “rescue” sanctuary known as Suwanna Ranch, which they claim is the world’s largest farm animal refuge. This property also includes a large sanctuary for wildlife.

It appears HFA does not publicly align or associate with most mainstream extremist groups, particularly the HSUS. In fact, these two groups seem to be outwardly opposing each other. Even though HFA has voiced public opposition to the HSUS, the HFA is clearly no friend to most US farmers. Despite backing similar-minded political action, HFA is a bit unique among its extremist peers as it frequently attacks groups like HSUS while holding the same ideologies. According to HSUS, part of the issue has to do with HFA not upholding all the same extremist legislation. Ironically, HFA has accused HSUS of doing the exact same thing in an article on their website called The Truth About HSUS’s Smear Tactics.

Misleading groups like HFA can twist the perception of well-meaning people who genuinely want to support farmers and livestock. HFA presents itself as an educational group, therefore it is easy for people outside of agriculture to fall prey to their tactics and not see the full picture or understand their agenda of disparaging animal agriculture.

Farming practices at large modern farms focus on animal welfare as a key factor to their business model and success. This is done with the help full-time veterinarians, both those working in the field and conducting university research. They also include other animal specialists and farmers who are committed with giving their animals the best quality of life based on science.

Large modern farms efficiently manage their animals and practice good environmental stewardship practices. Operations which work on large and modern scales are not by accident. These practices are the result of years of study, good science, and veterinary medicine to keep them effective and safe for people, the animals, and the environment. Besides turning a profit for farmers, these farming methods also keep food prices affordable.

A giveaway to the true motive and ideology behind HFA can be found in the choice of words used on their website and promotional materials. They frequently use terms like “imprisonment” to describe commonly accepted practices of livestock husbandry. They also casually associate “cruelty” and “abuse” with everyday practices on large modern farms. Most of the words they choose to describe modern farming practices are from the same lexicon used by other extremist groups to invoke emotional, not rational, reactions.

To propel their agenda, HFA relies heavily on the same deliberate disinformation that other extremist organizations effectively wield. This includes disinformation about the use of antibiotics, hormones, and what they call “other chemicals” used in modern livestock production.

When spearheading their national veal boycott, HFA spread the common falsehoods that veal calves are kept in perpetual darkness, denied water, and fed a “drug-laced liquid feed.” Their director Bradley Miller even made an appearance on the Oprah Winfrey Show to further push their messaging.

Hired an Associate to Work “Under Cover” and Film a Documentary

It should also be known that HFA is no stranger to undercover “investigations” and “exposes” on modern farms. They were directly responsible for a disinformation documentary that aired on HBO titled Death on a Factory Farm, which was filmed by an undercover investigator who was paid by HFA. The documentary included a local court hearing in which the Ohio farmers were charged with alleged abuse by the HFA undercover investigator. It should be noted that the judged cleared them of nearly all charges.

This group also targets horse processing and is against the practice despite the fact that nearly 100,000 unwanted horses are shipped to Mexico and Canada each year for processing. They offer no alternatives for the over-population issue and certainly are not footing the bill to feed these hundreds of thousands of horses every year. They are also ignoring that fact that horses provide valuable byproducts and are a high protein food source for people all over the world. It is not uncommon to see it offered on restaurant menus across Europe, South America, and Asia. More of their equine-related under cover footage was shared by the Animal Welfare Institute.

Another “investigator” paid by HFA penned the defamatory book Slaughterhouse: The Shocking Story of Greed, Neglect, and Inhumane Treatment Inside the U.S. Meat Industry. The book claims to detail “the industry's wholesale disregard of the Humane Slaughter Act, a federal law passed in 1958 intended to protect slaughter-bound animals from cruelty.” Their investigations were also responsible for a Washington Post hit piece on the meat and processing industries.

HFA makes it their mission to target children as well as adults. They offer a “humane education” page on their website with materials designed for children as young as four years old.
“Some materials dealing with farm animals distance children from the fact that cows, pigs, and chickens are living, feeling, sentient beings,” reads the description of their coloring and activity book. “…Each page is sensitively crafted to be thought provoking and educational.”
The HFA online store sells extremist campaign materials including posters, pamphlets and DVDs targeting eggs, pork, veal and more. They encourage visitors to use their resources for lectures, programs, and presentations at home or in classroom settings.

HFA has been a driving force in extremist legislation that targets large modern farms. Their campaigns are based on emotional responses that aren’t backed by science, industry experts, or animal health professionals.

In 2016 the Massachusetts Question 3 ballot initiative passed by the state’s voters. Due to it going into effect in 2022 and the food shortages it would cause in the state, Senate Bill 2603 was introduced. Question 3 had rigorous regulations that would restrict laying hens and pork industry spacing and management practices. SB 2603 compromised some of the language in Question 3 so that the state would continue to have an affordable food supply.

In December of 2021, HFA Executive Director Bradley Miller openly criticized Massachusetts SB 2603 stating it was, “...a devastating setback to farm animal protection and a major betrayal of Massachusetts voters." He went as far to say that the bill was, “...an outright repeal and replacement of Question 3’s central and most important anti-cruelty provision.”

It appears that HFA would rather see people hungry and unable to afford food, even when other extremist groups would prefer to compromise on such an issue.

The Players Behind the Scenes

As can be expected, HFA does not share much personal information about their staff and directors working behind the scenes. Almost none of their employees or board members have any presence on LinkedIn, and it appears many of them have been at HFA for some time. Their former outreach director, Dena Jones, is currently the director of the farm animal program at the Animal Welfare Institute. She has also worked at World Animal Protection and Farm Sanctuary, which is another group HFA doesn’t work well with.

There is also reason to believe that this California-based group has ties to the Los Angeles City Council since Paul Krekorian (HSUS Legislator of the Year) was the general counsel for the group. The council has ties to multiple other extremist groups, most notably Mercy for Animals and PETA. Los Angeles City Council members have continually pushed animal extremist ordinances including attempting to force LA City Shelter dogs on a vegan diet, banning the sale of fur in the city, and current attempts to ban rodeo events and animal exhibition. They have even provided an audience to a fringe extremist group vying to ban pony rides in Griffith Park.

At a single glance, HFA may appear to be a more “reasonable” extremist group, perhaps even one who values farmers. However, a look through their track record, interests, and practices tells another story. While most extremists cooperate with each other within their advanced networks, there are still many outliers who hold to the exact same ideologies.