HUMANE SOCIETY OF THE UNITED STATES

The Humane Society of the United States (HSUS), is not what they have been leading people to believe:

The closer you look at the labyrinth of the Humane Society of the United States (HSUS), its leadership, its staff, and its associates, you begin to see the truth behind an organization that is trying to obliterate a large portion of American culture and heritage.

Not Your Local Animal Shelter 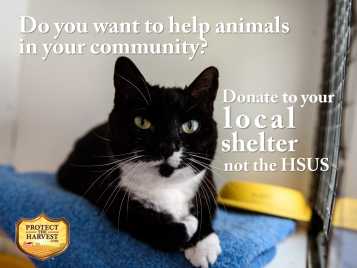 HSUS uses the name “Humane Society” but is not affiliated with any local animal shelters or local humane societies. In fact, their national fundraising efforts hurt community organizations by diverting local donations. In recent years HSUS IRS Form 990’s have shown that less than 1% of the funds they raise actually make it to shelters. When they do send money to a shelter, it is typically a small amount ($1,000 to $2,000) to be used to promote low-cost spay and neuter clinics.

Statement from HSUS Ex-CEO Wayne Pacelle:
“We never said we funded animal shelters…That’s not in our history or in our statement.”

HSUS Is an Animal Extremist Organization – Culture Starts At The Top

It is a well-known fact that the culture of an organization starts at the top. The current CEO of the HSUS, Kitty Block, is a past PETA Employee. The ex-CEO, Wayne Pacelle, who was in a leadership position within the HSUS for almost two decades has repeatedly revealed his animal extremist ideology.
Wayne Pacelle believes that the differences between animals and humans are “differences of degree and not kind.”

For more information about Pacelle and his ideology: https://www.activistfacts.com/person/3366-wayne-pacelle/

The Animal Extremist Culture is Perpetuated Via Hiring Practices

Most people are not aware that the HSUS has absorbed some of the smaller, more radical, animal extremist organizations. When the HSUS brings staff over from these extreme animal extremist groups, it would be extremely foolish to assume they check their radical ideology at the door.

In its own “Statement on Farm Animals and Eating with Conscience”, the HSUS reveals its true beliefs about food. Outlined on their website, you’ll find their “Three R’s” approach:
Reducing the consumption of meat and other animal-based foods;
Refining the diet by eating products only from animals who have been raised, transported, and slaughtered in a system of humane, sustainable agriculture that does not abuse the animals;
and Replacing meat and other animal-based foods in the diet with plant-based foods.

As you can see, any move the HSUS makes towards agriculture is all in pursuit of the goal of reducing the demand for animal products and drying up the market for these goods.

Animal extremism has become a billion-dollar industry. The HSUS is very well funded from donations given to them by goodhearted people who have been duped into believing they are a national animal shelter organization and that their donations go to help animals in need. The HSUS has hundreds of millions in their coffers, stored in off-shore bank accounts and publicly traded securities. Tens of millions more are spent on fundraising and advertising. Then there are the high salaries of their executives, including millions invested in their retirement funds and other benefits.