PEOPLE FOR THE ETHICAL TREATMENT OF ANIMALS 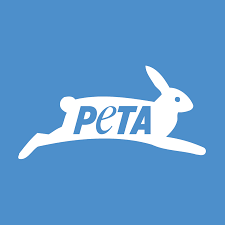 Unlike the HSUS, PETA is much more front and center about their radical animal extremist ideology. They view animal ownership as slavery and abuse. Their co-founder and President, Ingrid Newkirk, has described the group’s overall goal as “total animal liberation,” which means eliminating all human-animal interaction. According to Newkirk, animals should be appreciated from afar and that many are better off dead than in human care.
Total animal liberation and the elimination of all human-animal interaction means that the group is seeking to end the human consumption of animal protein products like meat, milk, cheese, eggs, butter, yogurt, and even honey. Along with this, they protest against hunting and fishing. PETA is also working to see the end of zoos, aquariums, circuses, pet ownership and all medical research involving animals. PETA is most famously known for their outrageous campaigns against the clothing industry by protesting the use of fur, leather, silk, and wool.

PETA gains attention from shocking and horrifying the public. Their campaigns have featured Jewish victims of the Nazi Holocaust, religion, nudity, and scenes of animal abuse. They have launched numerous protests at churches and have even attempted to present Jesus Christ as a vegetarian. PETA has gone so far as to sue one church that tried to protect its members from harassment. It is important to note that one of the leaders of PETA’s “Holocaust on Your Plate” campaign now works for the Humane Society of the United States (HSUS).

Like the HSUS, PETA is well known for practicing unscrupulous tactics in order to push their animal extremist agenda. Along with the HSUS, they participated in the decade-long harassment of Ringling Brothers and were ordered to pay their share of the $25,000,000 settlement to extricate the organization from a RICO case. Some of their activities are listed below:

PETA has supported animal liberation terrorists by helping to pay for their legal defense and providing them with funding in other ways. Some of the violent criminals they support are convicted arsonists.
They have provided monetary support to groups the FBI has identified as a domestic terrorist group, like the North American Earth Liberation Front (ELF). They have also supported an Animal Liberation Front (ALF) serial arsonist convicted of burning down a Michigan State University research laboratory. PETA president, Ingrid Newkirk, was also implicated in the crime by the Federal Prosecutor. 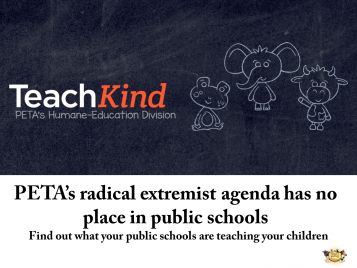 Like the HSUS, PETA has been hard at work influencing children both in the classroom via their “TeachKind” program and via their website PETA2 which hosts a variety of grotesque video games.

For more information about PETA2 and the organization’s efforts to influence and convert children to their radical ideology, follow this link

PETA is well-known in the animal welfare community for producing outrageous, fake videos and images in order to mislead the public. They have gone so far as to create animals out of rubber and wax and then drench them in blood for photo shoots. There are other reports that they have done much worse.
Mashable, a global multi-platform media company that has a large social outlet presence, exposed PETA in June of 2017. They outed the group for photoshopping a fake CGI animal abuse video. PETA had approached their PR firm with a scheme to mislead the public. Here’s a statement from Mashable’s article:

“Through this marketing effort, PETA is trying to convince the media to report and share a fake video as if it's real, in hopes of deceiving the public to create manufactured outrage. As animal lovers, this is offensive. As a media outlet with a responsibility to truthfulness, this is unethical.”

While PETA’s approach is far more grotesque and offensive than other animal extremist organizations, they are embraced by their affiliated groups, often partnering in projects, lawsuits, and marketing legislation. Just like the HSUS, PETA spends tens of millions each year on advertising and marketing.

Harassment and Throwing Mud at the Wall to See What Sticks 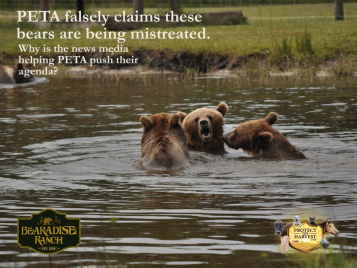 PETA selects targets to harass and pester with form letters and outlandish requests. In a sense, they throw mud at the wall to see what will stick and then hope the letter, outlandish assertion, or request makes the news.
In addition to participating in projects with other animal extremist groups, PETA uses their massive coffers to harass innocent people. An example of this is their harassment of Beardise Ranch in Florida, making false claims to the news media, sending threatening letters and calling out via social blasts for volunteers to troll Bearadise Ranch online. Another example is their financial ruin of a photographer. They sued him for copyright infringement when a macaque monkey inadvertently took a picture of itself with the photographer’s camera.

Information about the Naruto case: https://www.theguardian.com/environment/2017/jul/12/monkey-selfie-macaque-copyright-court-david-slater

PETA is part of the billion-dollar animal extremist industry. They are very well funded from donations and have also sought out celebrity endorsements.
For more information about PETA, their agenda and tactics: https://www.activistfacts.com/?s=peta