WHAT YOU NEED TO KNOW-ANIMAL EXTREMIST GROUPS -POLLINATION PROJECT 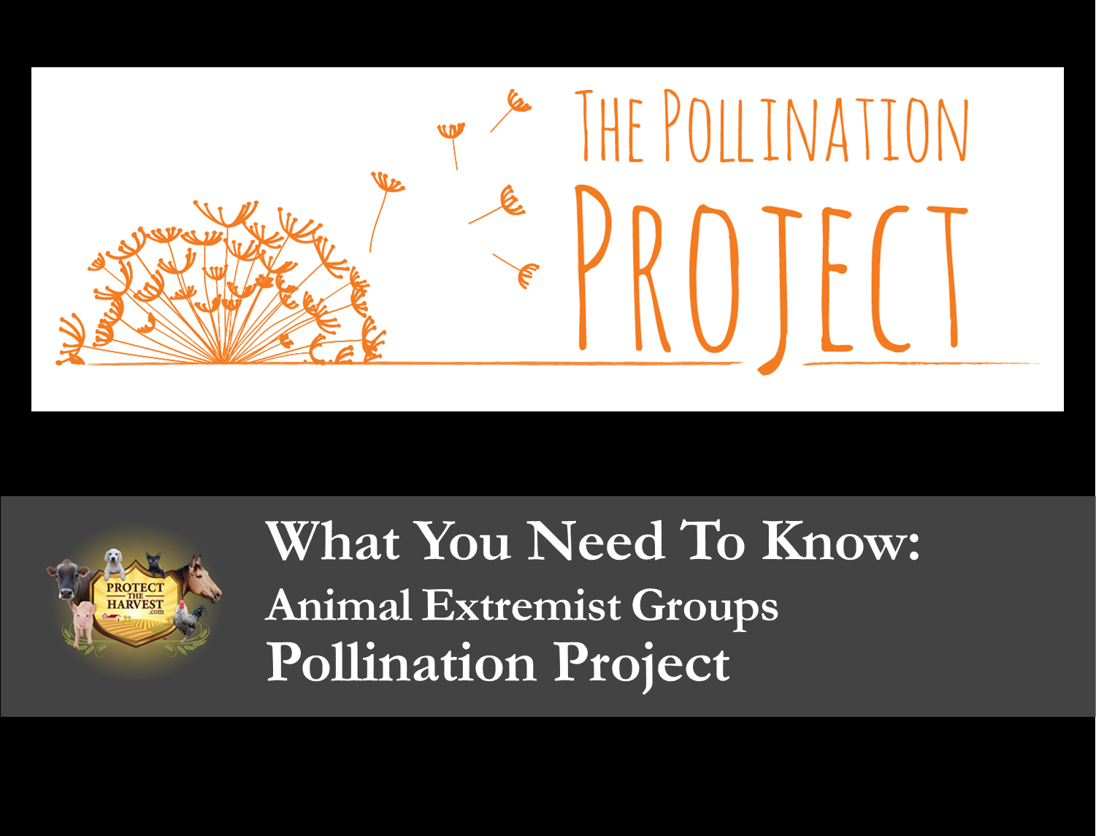 The Pollination Project Has Nothing to Do with Bees: Disguised Animal Extremism

The animal extremist movement has become much bolder in recent years. Groups like Direct Action Everywhere (DXE) and their affiliated Project Counterglow are blatantly aggressive and dangerous in the nefarious work they do. Since the motives and goals of these extremist groups are being exposed, they are resorting to increasingly convoluted and devious tactics to advance their agenda.

A perfect example of using creative tactics is The Pollination Project (TPP), which is a 501c3 non-profit organization that was established in 2012. Despite the name, TPP has nothing to do with bees. Instead, it is an organization formed to back radical groups. Their website states The Pollination Project is, “a global community of over 4,000 grassroots changemakers in 116 countries. These visionary servant leaders bring their hopes for a kinder, more compassionate world. In return, we offer seed funding, capacity-building support, belief, and connectivity with other aligned leaders.”

“Aligned” With Animal and Environmental Extremism

Exploration of the TPP website quickly shows that by “aligned,” they mean aligning with animal and environmental extremism. It is not surprising that TPP vilifies agriculture and refers to livestock animals as “non-human animals.” How they are inserting themselves into vulnerable groups and communities is of great concern.

Every day of the year, TPP offers $1000 in “micro-grant” seed money to what they refer to as “grassroots changemakers” who are working in one of seven focus areas: animal rights and welfare, education and access to opportunity, environmental conservation and regeneration, health and wholeness, human rights and dignity, artistic expression and creative communities, and empowerment of women and girls.
Despite the flowery, feel-good language, TPP is at its core just another tentacle of animal extremism. Animal and environmental extremist groups routinely work together by sharing staff and financial resources. A quick look through the TPP website shows the chain of connection to groups like PETA International and Project Counterglow. A direct link leads to a Vegan Bootcamp website that features a how-to course and ideological guidelines, presumably to make sure grant applicants are properly “aligned.” Vegan Bootcamp is then linked to Vegan Hacktivists, which lists among its partners PeTA International and Project Counterglow.

The PP website features a page titled, “Animal Welfare Grants”. The page lists: “We’re eager to fund projects that aim to have a large impact on animal welfare and we are especially interested in work focused on: Reducing the consumption of land and sea animals raised using industrial agriculture practices.” Further down the webpage states: “We are a vegan organization…”. They list examples of projects they can provide funding for which includes the following:
• Vegan advocacy
• Farmed animal welfare campaigns targeting corporations or legislation
• Raising awareness around farmed animal cruelty
• Meat-free challenges
• Vegan options at schools or restaurants

Numerous offshoots of TPP are found in developing countries. On the surface, these projects focus on issues like ensuring access to education and supporting developing artists. While causes like these certainly appear admirable, the underlying animal extremist mission of The Pollination Project strongly suggests that pushing veganism in these vulnerable communities is the true goal. This shows an incredible disconnect from reality since the use and consumption of animal-derived products are directly tied to improving the living conditions and economy in developing countries.

According to research by Herrero, Grace, Njuki, Johnson, Enahoro, Silvestri, and Rufino, published by the National Library of Medicine, “Livestock play a significant role in rural livelihoods and the economies of developing countries. They are providers of income and employment for producers and others working in, sometimes complex, value chains. They are a crucial asset and safety net for the poor, especially for women and pastoralist groups, and they provide an important source of nourishment for billions of rural and urban households.”

Additionally, 60% of the world’s hungry are women. It is incredibly hypocritical for TPP to profess to advocate for “health and wholeness” and “empowerment for women and girls” while at the same time pushing veganism.

Within the US, the influence of TPP advocates is even more disturbing. Several TPP grant recipients have used the money to help create programs targeting children. Anytime children are targeted, it should sound alarm bells due to their ability to be easily influenced and indoctrinated.

One TPP offshoot project states, “Realizing the influence children can have on their families and friends, Allie wanted to create a special day camp...”
Another project targets children with a bright, kid-friendly website telling the story of a rescued rooster. The website boasts that the program has already reached over 5,000 kids. This project’s founder sells school programs and is publishing a children’s book.

Still another TPP grant recipient professes to “teach love” as part of the controversial social-emotional learning (SEL) movement. It is deeply troubling that TPP and its followers are preying on children to advance their agenda, and parents must be aware of the materials being presented to their children at school.

Now more than ever, it is essential for people to understand what their donated dollars are truly supporting. Groups like the Pollination Project work hard to paint their extremist motives in pretty colors and variety in an attempt to appeal to a broader audience.

Mercy for Animals Article about PPHERE