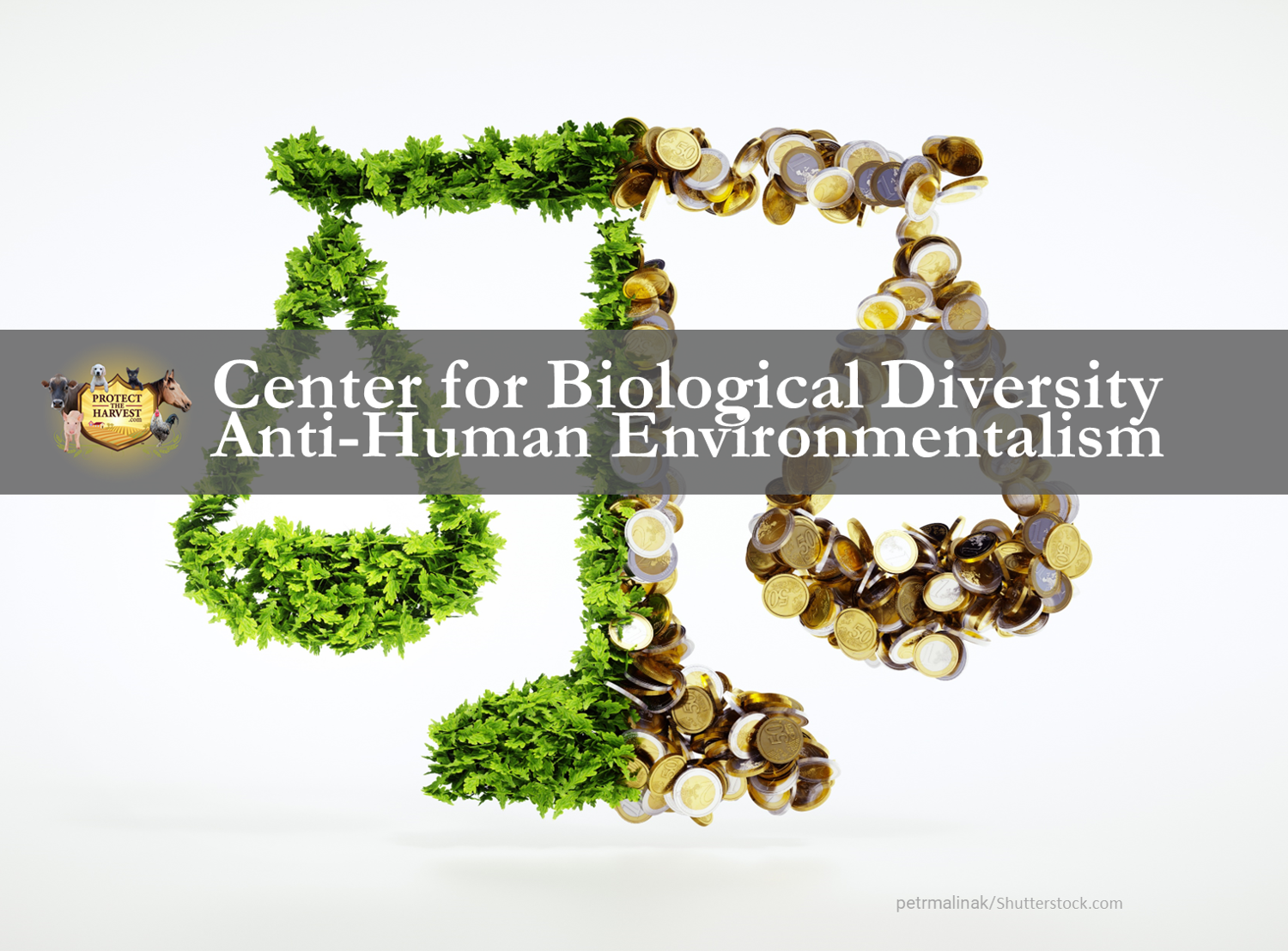 The Center for Biological Diversity (CBD) was founded in 1989 by Kieran Suckling, Peter Galvin, Todd Schulke, and Robin Silver. At the time, the four men were working as part of a surveying crew in rural New Mexico. As the story goes, they found the nest of a Mexican spotted owl in an old-growth tree and decided among themselves that the government wasn’t doing enough to protect “sensitive” species.

Since that time, CBD has metastasized into an infamously litigious arm of the environmental extremist movement, waging war on productive land use. CBD is based in Tucson, Arizona with additional offices in New Mexico, Nevada, California, Oregon, Illinois, Minnesota, Alaska, Vermont, Florida, and Washington, D.C. The group employs approximately 170 people, including nearly 50 lawyers, and relies on routine abuse of the Endangered Species Act (ESA) to further its agenda. One of the central goals of CBD is to expand the ESA to encompass the “protection” of entire ecosystems.

CBD’s website boasts “based on our unparalleled record of legal successes — 83 percent of our lawsuits result in favorable outcomes — we've developed a unique negotiating position with both government agencies and private corporations, enabling us, at times, to secure broad protections for species and habitat without the threat of litigation.” This “sue and settle” tactic is common practice for extremist groups.
“We’re crazy to sit in trees when there’s this incredible law where we can make people do whatever we want,” Suckling was quoted as saying in a 1999 article in The New Yorker.

In an article for the American Council for Science and Health, Alex Berezow, Ph.D., wrote: “In other words, since everybody knows that CBD wins lawsuits, they don't even have to threaten you with one to win. That's like saying that the Godfather has such a well-known negotiation strategy that he doesn't even have to put a dead horse's head in your bed to get what he wants.”
Over the years, organized environmental extremism has proved to be quite lucrative for CBD and its staff. Kieran Suckling is not only a founder of CBD but he is also the current Executive Director. He once blamed his own “poverty and stupidity” for a shoplifting incident, but he’s come a long way and now earns an annual salary and benefits nearing $300,000—over 8.5 times the median individual income in the U.S.
Unfortunately, not everyone has the wherewithal and resources to successfully fight the CBD machine.

Suckling has expressed that group members have absolutely no qualms about trespassing, and the history of CBD is completely littered with other unethical practices. Suckling admits that playing dirty is part of their strategy. He was quoted in High Country News as saying, “Psychological warfare is a very underappreciated aspect of environmental campaigning.”
For CBD, the means justify the ends, and science-based, balanced resource management is not allowed to be considered. “I think the professionalization of the environmental movement has injured it greatly. These kids get degrees in environmental conservation and wildlife management and come looking for jobs in the environmental movement. They’ve bought into resource management values and multiple-use by the time they graduate. I’m more interested in hiring philosophers, linguists and poets. The core talent of a successful environmental activist is not science and law. It’s campaigning instinct. That’s not only not taught in the universities, it’s discouraged,” Suckling said in The New Yorker.

The Use of Disinformation

CBD has made a habit of relying on all kinds of misinformation and even outright lies to advance its cause. In 1998, Jim Chilton successfully sued CBD for defamation following an attack campaign to force Chilton Ranch off one of its grazing allotments. The basis for the lawsuit was a CBD news advisory that featured 21 zoomed-in photos that later proved to be a roadside campsite, private land, a mining area, and a former cabin site. False statements in the advisory claimed the Chilton’s allotment was “grazed to bare dirt,” “100% utilized,” and “damaged.” However, all ten jurors agreed that CBD’s news advisory did not “accurately describe the condition of the Montana Allotment.” Nine voted that CBD’s press release contained “false statements” and “misleading photographs” and that CBD had published it “with an evil mind.” CBD was forced to pay Chilton $600,000 in damages.
CBD’s ‘Take Extinction Off Your Plate’ project targets the meat industry as a whole and the beef industry in particular. The project seeks to reduce beef consumption and production by 90%. Predictably, the project recites the thoroughly debunked claim that meat production is responsible for more greenhouse gas emissions than all forms of transportation combined. In truth, a 2016 EPA report showed that all sectors of agriculture only contribute only 9% of greenhouse gases, with the entirety of animal agriculture contributing only 3.9% to total emissions.

CBD has become quite successful at strong-arming land management agencies into cooperation with their extremist agenda, even when the desired results defy everything CBD pretends to stand for.
In some cases, when CBD wins a lawsuit, it doesn’t actually help the species it was meant to. For example, following the elimination of grazing along a protected section of Arizona’s Verde River, the population of spikedace fish dropped to zero. One scientist that worked on the project stated: “What appears to be the true reason for the demise of the spikedace in the Verde [is] that it was extirpated by policies the Forest Service adopted to satisfy the demands of a couple of environmental groups.”

CBD’s lawsuits and agreements further reached into the United States Forest Service and 65 stray cattle in New Mexico were gunned down by an aerial sharpshooter in early 2022. Livestock producer groups were notified of the plan to gun down the cattle only a week before the shooting took place. CBD claimed that areas of the allotment had been “trashed” by cattle, even though there was no proof that the alleged damage hadn’t been at least partially caused by wildlife.
Following the incident, photos surfaced of three bulls lying dead in a class 1 stream, which is a stream classified by the USFS to provide quality habitat for fish. There was also photographic evidence of young calves having been orphaned. Of course, in their astonishing hypocrisy, CBD has zero remorse or care for the pollution and animal cruelty for which they are directly responsible.

The Devastation of Essential Industries

Historically, CBD has targeted the practices of logging, mining, energy development, and grazing livestock on federally managed lands as well as privately owned land. The Southwestern Communities Coalition has commented about the tactics of CBD and Suckling: “The irony and hypocrisy of his antipathy for natural resource-based industries is that recreation on federal lands loses far more money for the federal government than does grazing or logging, as documented by the Policy and Environment Research Center. Suckling makes no mention of this, likely because he, his organization, and presumably supporters of the Center for Biological Diversity are big proponents of recreation on federal lands.”

The result has been the devastation of essential industries.
“We’ve basically crushed the timber industry,” Suckling said in The New Yorker.

It is not a coincidence that wildfires have since devoured millions of acres of trees and countless wildlife, both “sensitive” species and otherwise. Not surprisingly, CBD has been largely silent on the topic of wildfire and its effects on the ecosystems they pretend to hold so dear.
"Our opponents don't use science, they subvert science," said Arizona rancher Jim Chilton in Range Magazine. "Endangered species are just their tools to raise money and to impose their antiproduction philosophy."

While CBD may seem to only be a particularly treacherous “sue and settle” environmental extremist group, a deeper look into the group’s affiliations and core ideology reveals profoundly antihuman leanings.
As the old saying goes, you can catch more flies with honey than vinegar, and CBD puts up quite an elaborate front to camouflage their true intent. Publicly, CBD states that its mission is saving life on earth, and that “the welfare of human beings is deeply linked to nature.” However, co-founder Kieran Suckling was quoted as saying that the group is ultimately striving for a “decentering and disempowering of the human” by “using one side of industrial society against itself.”
CBD has taken environmental extremism a few steps further than other groups and openly calls for population control. CBD stated: “There are more than 7.5 billion people on the planet, and we’re adding 227,000 more every day. We’ve already witnessed the devastating effects of runaway human population growth on biodiversity... runaway population growth is too often ignored by the public, the media and even the environmental movement... we can still save wildlife, by choosing to stop hogging the planet.”

In addition, CBD stated that, “Each additional child increases your carbon legacy by 20 times what you could save over a lifetime of recycling, switching to low-voltage light bulbs and driving a hybrid car—combined.”

The group has pushed a number of population control campaigns over the years. In 2015, the “Get Whacked for Wildlife” promotion offered free t-shirts to men who were sterilized as part of World Vasectomy Day. In 2019, a CBD newsletter encouraged male sports fans to recruit friends to go in and have “team” vasectomies. The program director bizarrely wrote, “March Madness is upon us. And as all the number one seeds prepare for the tournament, it’s time to think about whether you want your own seeds to advance.”
CBD currently offers “Endangered Species Condoms” and passes out prophylactics in packages with corny slogans such as “hump smarter, save the snail darter” and “safe intercourse saves the dwarf seahorse.”

Even more troubling is the fact that CBD has been closely affiliated with North Carolina billionaire Fred Stanback and his superficially philanthropic organization: Foundation For The Carolinas. Stanback was one of only three donors named as having donated at the highest level to CBD and his foundation has donated over $12 million to CBD since 2010.
In an April 2018 report by the Knoxville News, Stanback was described as a “proponent of anti-humanist environmentalism” and supporting the idea that “protecting the environment hinges on population control.” Over the years, Stanback has funneled hundreds of millions of dollars into environmental extremist groups, abortion supporters, population control advocates, and anti-immigration groups. In 2013, Stanback was quoted as saying: “Numbers of people affect the environment.

They want all the nice things that the rest of us have, but America can’t take all the poor people in the world.”
While CBD displays an outward stance that’s more beneficial for public relations and fundraising, their overall antihuman mentality is very much in play. Not only does CBD seek to eliminate our use of natural resources, the group shamelessly maneuvers to impede human society in other ways. For instance, in Tucson, Arizona, one school district had plans to build a much-needed new school in what was supposedly critical habitat for a species of desert owl. While other environmentalist groups had the grace and good sense to not pursue the alleged issue, CBD filed suit.
Suckling was quoted in RANGE Magazine as saying, “A loach minnow is more important, than say, Betty and Jim’s ranch – a thousand times more important.” However, CBD’s track record of utter disregard for the collateral damage of their mission shows us that their guise of philanthropy cloaks a profound threat to us all.

With its extremist ideology and maniacal underhandedness, CBD is a powerful menace, not just to natural resource industries, but to people and society. It is starkly clear that their idea of biological diversity does not include the human race.
How can you protect yourself from extremist groups like CBD?

Check out our Protecting Our Lifestyle and Livelihood guide on how to get involved in local, state, and federal issues that will affect you and your family.