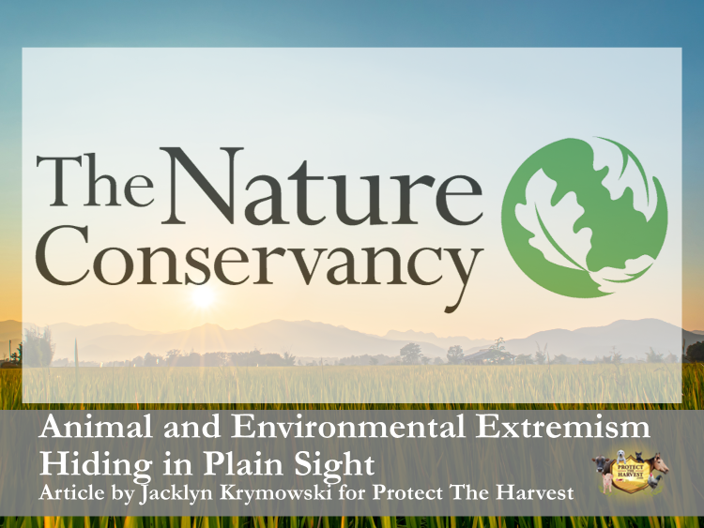 Many people involved with animals are aware of the mainstream extremist groups. Some of the groups which are household names are: The Humane Society of the United States (HSUS), American Society for the Prevention of Cruelty to Animals (ASPCA), People for the Ethical Treatment of Animals (PETA), and the Sierra Club. The extremist community has a much wider network than most people realize. Collectively these groups will operate behind the scenes to enforce their extremist legislation, target agribusinesses, and spread propaganda. In many cases they even share funding, resources, and contacts. The changes they attempt to enact are not based in science or animal welfare – rather they are rooted in human emotion and ideology.

Included in this network, on an even more hidden level, are other non-governmental organizations (NGOs) in the conservation and environmental spheres. Many of these groups put on a good non-extremist front and seem to support favorable and reasonable causes. The Nature Conservancy (TNC) is one of these groups. They come across as being farmer-friendly as they emphasize practices on their website that they deem as “regenerative” and “sustainable.”
Unfortunately, this is but a thin veil. In reality, TNC is actually against modern farming methods that make food safe, affordable, and efficient for a growing population. Let’s take a deeper dive into the questionable affiliations and ties that TNC has with environmental and animal extremist organizations.

Support and Partnerships Amongst Extremist NGO’s

Humane Society Wildlife Land Trust, a branch of the animal extremist group HSUS, works “in partnership with other conservation groups” to establish sanctuaries that prohibit all hunting and trapping. The Nature Conservancy has donated at least three separate properties to the Humane Society Wildlife Land Trust cause – a total of 129 acres in North Carolina.
Similarly, the New York region of the Conservancy also partners with the HSUS trust under a local organization known as the Central New York Land Trust.
These examples of networking aren’t only found on local levels. The current Humane Society International (HSI) Executive Director for the Latin American region is Andrea Borel, who was formally TNC’s conservation director for Costa Rica.
In a 2013 letter to then President Barack Obama, TNC’s Director of U.S. Government Relations Robert Bendick ,appeared alongside a litany of animal and environmental NGOs. Some of these are known anti-animal agriculture offenders including disgraced past HSUS President and CEO Wayne Pacelle, and ASPCA’s Senior Vice President of Government Relations, Nancy Perry.

In a 2018 press release, TNC’s Director of Policy and External Affairs Jay Ziegler, was listed as a contact in support for a California budget proposal with significant new funding for fish and wildlife. On the release were the following animal and environmental extremist groups: HSUS, Environmental Defense Fund, Defenders of Wildlife, and Ocean Conservancy.
TNC’s shares attorneys and professional solicitors with well-known extremist groups. A few TNC state locals utilize Netzel Grigsby Associates; a law firm specializing in environment and animal welfare politics. Their client lists include the American Humane Association, HSUS, the Sacramento Society for the Prevention of Cruelty to Animals, and others.
One of their solicitors, Donor Services Group, LLC, also serves a long list of extremist clients including the Animal Legal Defense Fund, ASPCA, HSUS, and HSI. Another shared solicitor, SD&A Teleservices, Inc., also works with Farm Sanctuary, Greenpeace, Defenders of Wildlife, and Sierra Club.

According to a 2015 report, TNC’s combined campaigns raked in $1,760,042, some of which is used to fund their political and legal actions.
It is important to take note of their powerful donors. Many of them are also contributors to extremist environmental and animal rights organizations.
Among the most concerning is the Castanea Fellowship, whose Windward Fund supports the Farm to Fork Initiative which is a community of stakeholders voicing the “good food” movement.
The Doris Duke Charitable Foundation, as another example, has funded the Defenders of Wildlife, the Union of Concerned Scientists, and the Environmental Defense Fund. The Wilburforce Foundation has awarded grant money, in addition to TNC, to the Sierra Club, Defenders of Wildlife, and the Union of Concerned Scientists.

Over three million U.S. acres are currently held by TNC under conservation easements. Like wildlife corridors, these are lands under the agenda to preserve natural spaces and wildlife habitats, which also help reduce carbon emissions. While this does allow landowners to retain their ownership, they lose their development rights, which includes agricultural development. Essentially, many of these are nothing more than disguised governmental land grabs.
These land grabs have not gone unnoticed. The Washington Post unveiled a series of articles in 2003 and 2004 that revealed multiple instances of TNC selling off some of their land to developers in return for large tax-deductible contributions.
Due to this exposé, TNC’s tax break was all but totally eliminated by Congress. Subsequently, they announced they’d be changing their business practices, among which would be ending land deals with employees and officers.

With this in mind, it’s no wonder that TNC does lobbying and funding for like-minded individuals who tend to side against property rights and animal agriculture.
In 2020, 99% of TNC’s political funding went to Democrats; $14,000 of which went to Senator Elizabeth Warren and $4,000 to Senator Cory Booker (outspoken vegan and pusher of extremist-influenced legislation). Booker introduced the infamously anti-agriculture Farm Systems Reform Act into the Senate and Warren immediately jumped on as a co-sponsor.
TNC was also on the side of the Great American Outdoors Act which was passed into law. This was a huge blow for agriculture and those who use public lands for hunting and fishing under the guise of being beneficial to them.

Some concerning characters have also publicly been aligned with TNC. David Brower, the former Executive Director of the Sierra Club, is a strong vocal supporter of TNC. Brower is also the founder of multiple environmental extremist groups like Earth First! and Friends of the Earth. In an interview, he famously explained:

Brower is also on record with multiple quotes about placing the environment above human well-being and need.

TNC is Careful Not to Expose its Disdain for Modern Farms

One of most dangerous aspects of TNC is that they are careful to not outwardly say they are against animal agriculture; a stark contrast to more public animal extremist groups like the ASPCA and HSUS.

The TNC can even appear as almost pro-agriculture due to a whole portion of their website being dedicated to “regenerative food systems.” Many of the animal extremist groups TNC aligns with likewise support these same systems.

These smaller-scale farming practices, while beneficial, are very different from large modern farms that efficiently and sustainably produce food for entire nations. This is especially true in the case of animal agriculture. Not only is modern animal production efficient, it is also conducted with methods developed and approved by scientific studies done through land grant universities with livestock scientists, researchers, and veterinarians.

The farming practices pushed by some of these extremist groups, not based on science, are not necessarily best for the animals or people. One example is Prop 12 in California. Prop 12, which is set to fully implement in 2022, is changing the standards on animals housing according to the guidelines mandated by the HSUS, an anti-livestock production animal extremist group. The mandated changes in Prop 12 for both California producers and any producer wishing to sell to California are not based on recommendations from university livestock experts. The new standards these groups pushed via Prop 12 are actually proven to cause a higher rate of death, illness, and injury to the animals than the current standards.

Sadly, the groups TNC chooses to engage with align with this type of thinking and have an ultimate goal of ending animal agriculture altogether.

Read more about the Sierra Club and David Brower HERE